So my original build thread went to fuck when i tried to update pics due to the photobucket ordeal, then the site updated in the middle of that and shit really went haywire. So instead of fiddle fucking around with that, lets start fresh with this thread.

Started with a 2000 Suzuki Grand Vigina pussy getter. wife hated it when i brought it home due to the trailer having more weight on it from panties being thrown than the GV being on it. After clearing them off and letting bulk pickup take them all, i parked it behind the house to start working on it 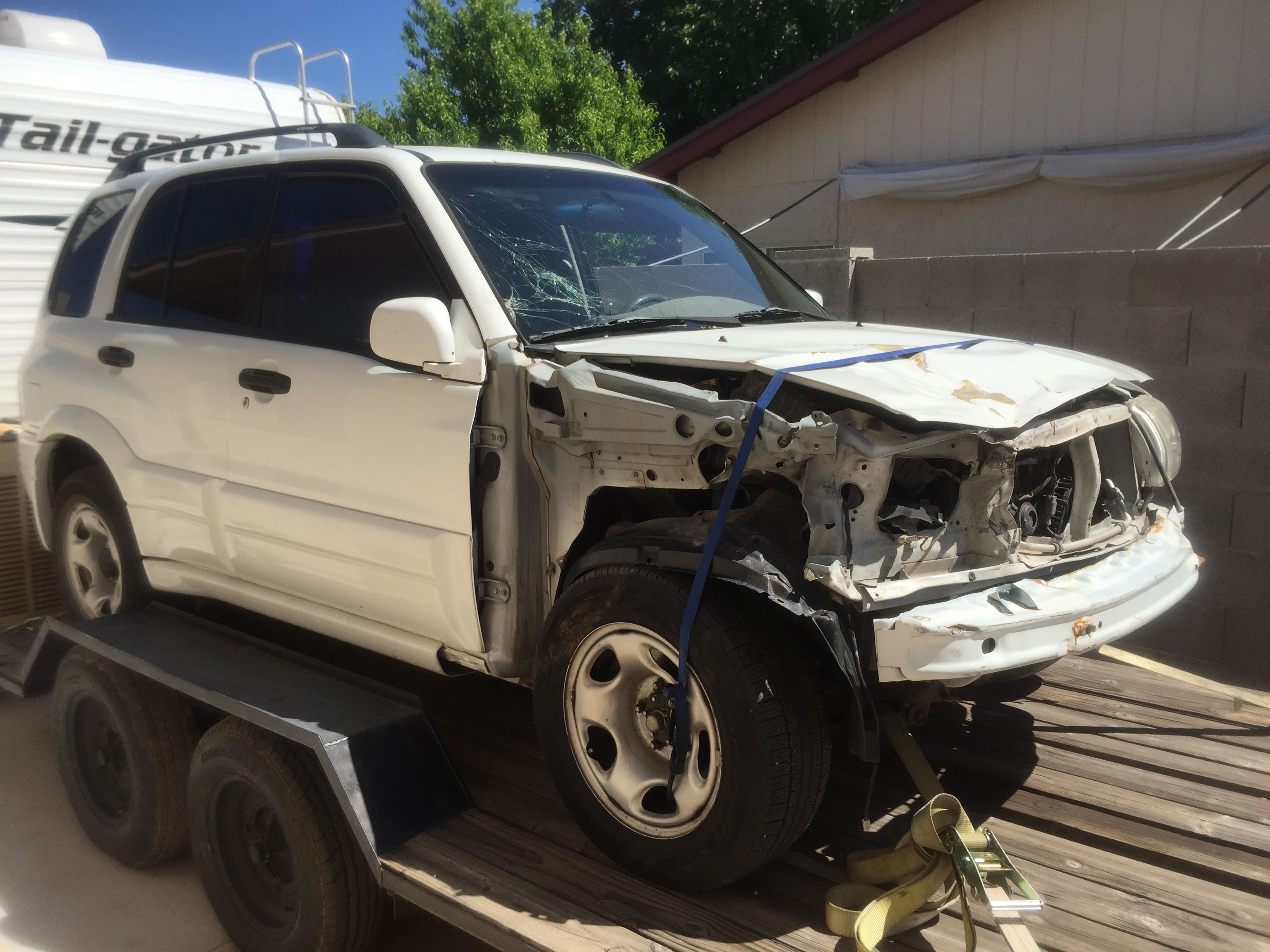 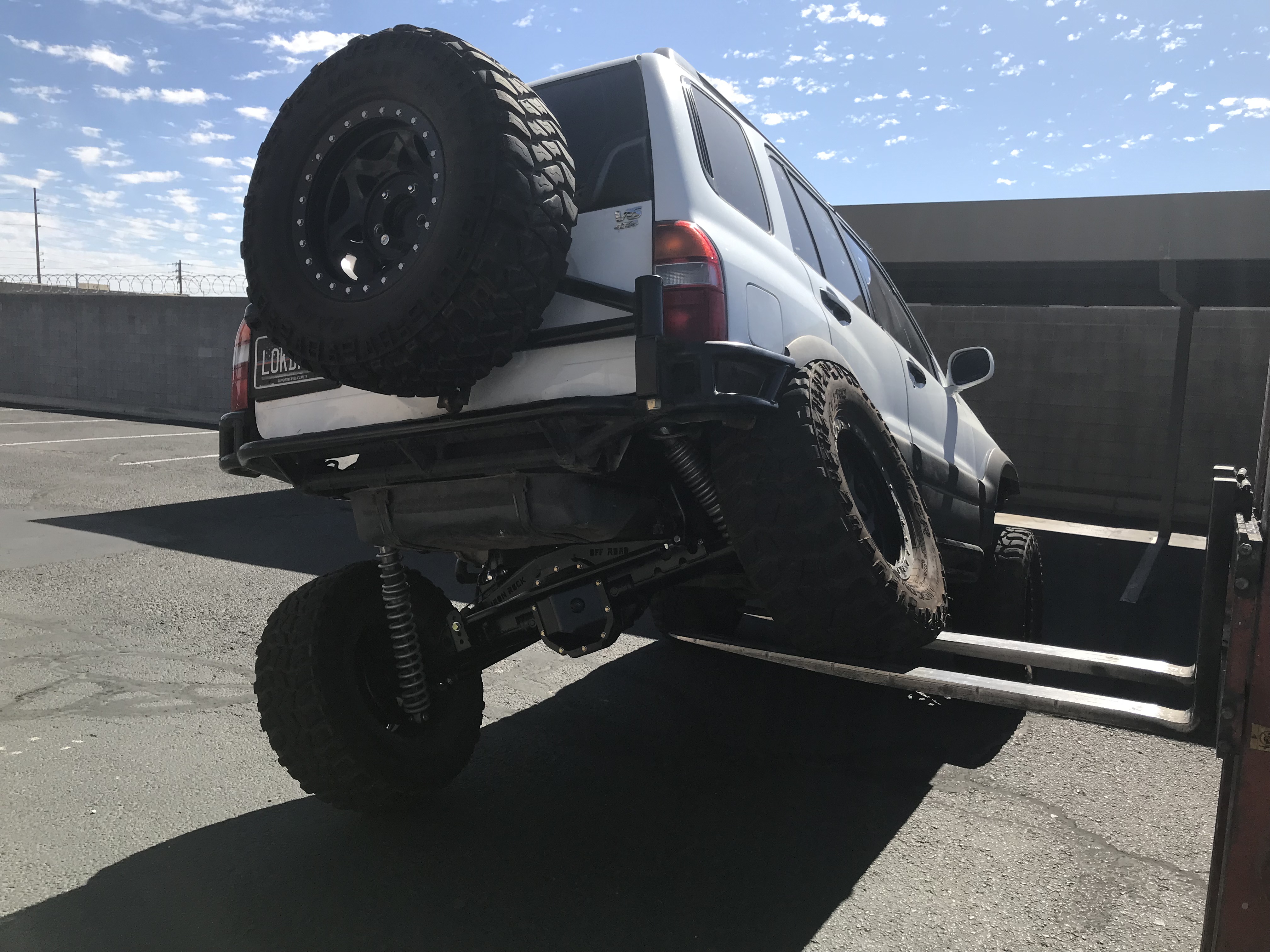 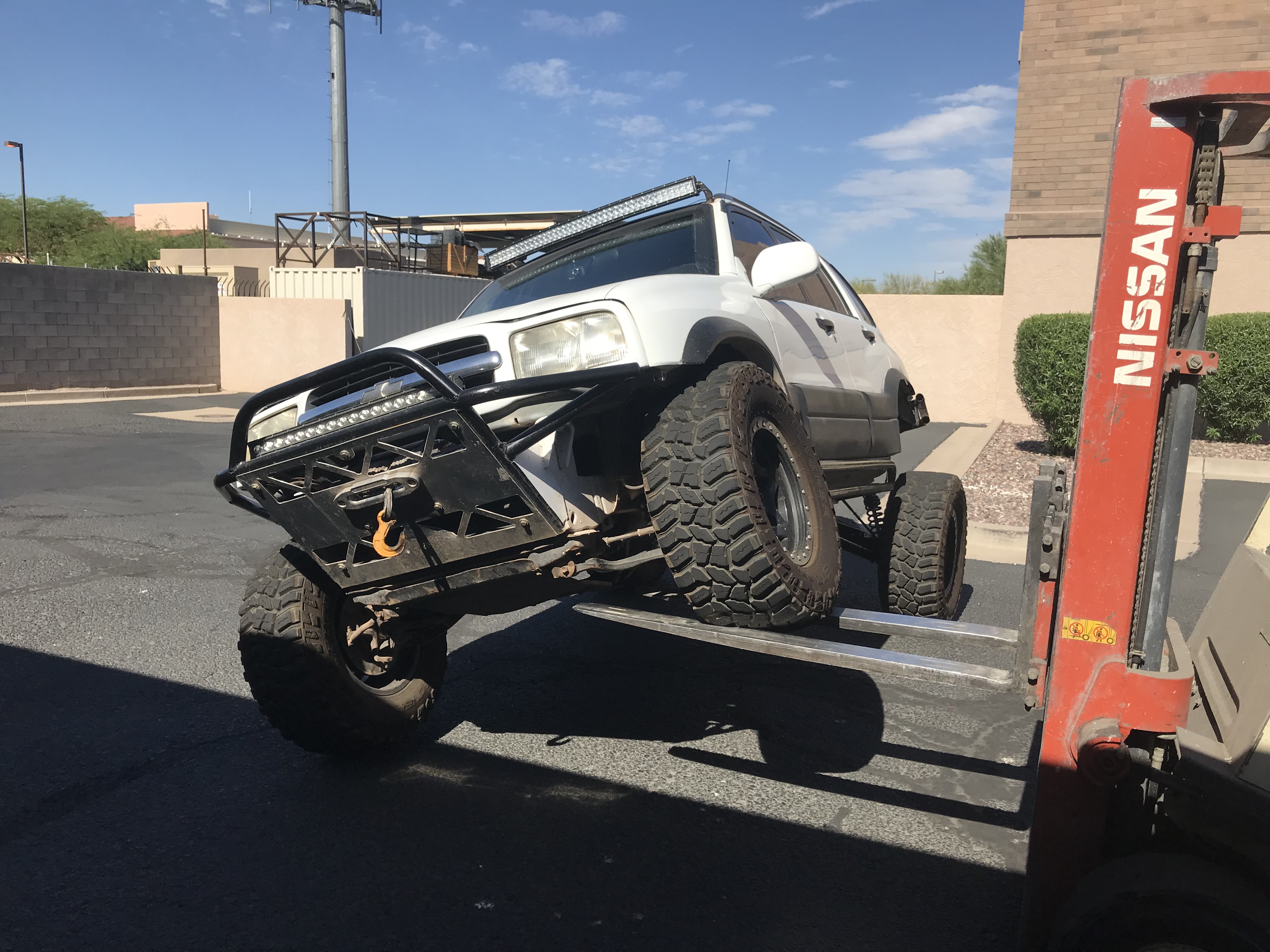 yes these are sweet mall crawler poser pics because who actually takes their shit in the dirt and lightbar on roof is lyfe.

Anyhow, started the build in 15 and ended up here. I think most of you so the OG thread but if not, here is the build like on Pirate. its pretty close to what all ive done over the years. A retared amount of work on a shit platform and wasted money buttfuckit, im gunna be retareded different. Hence, my buddy called it the "Retarded Trophy Truck" after this weekend. Mainly cause its the abortion a Geo Metro and Geiser truck would have if they ever fucked. It has body roll, is squishy over rough stuff, crawls parking lot curbs like a boss and may or may not 3 wheel.

This weekend was the first real test on the rear end i just finished. 3 link rear with panhard, 14" stroke coilovers mounted fucking wrong but im stubborn and attempted to make them work correctly using pinion angle, 4" 2.0 bumps shorten to 2", 2001 ford 8.8 f150 rear end changed to 5 on 5.5 bolt patter, truss, 5.13 gears, spartan locker. Fucking thing worked awesome from the old stock setup. need to add more spring back there and make some valving changes but i was more than pleased.

We started in wickenburg and drove dirt roads to Golden Valley. part of it was the AZ peace trail, other was home brewed Google Maps "lets see where the hell this goes". 160-170 miles of roads that were in better shape than i expected. Still some good rough sections though. 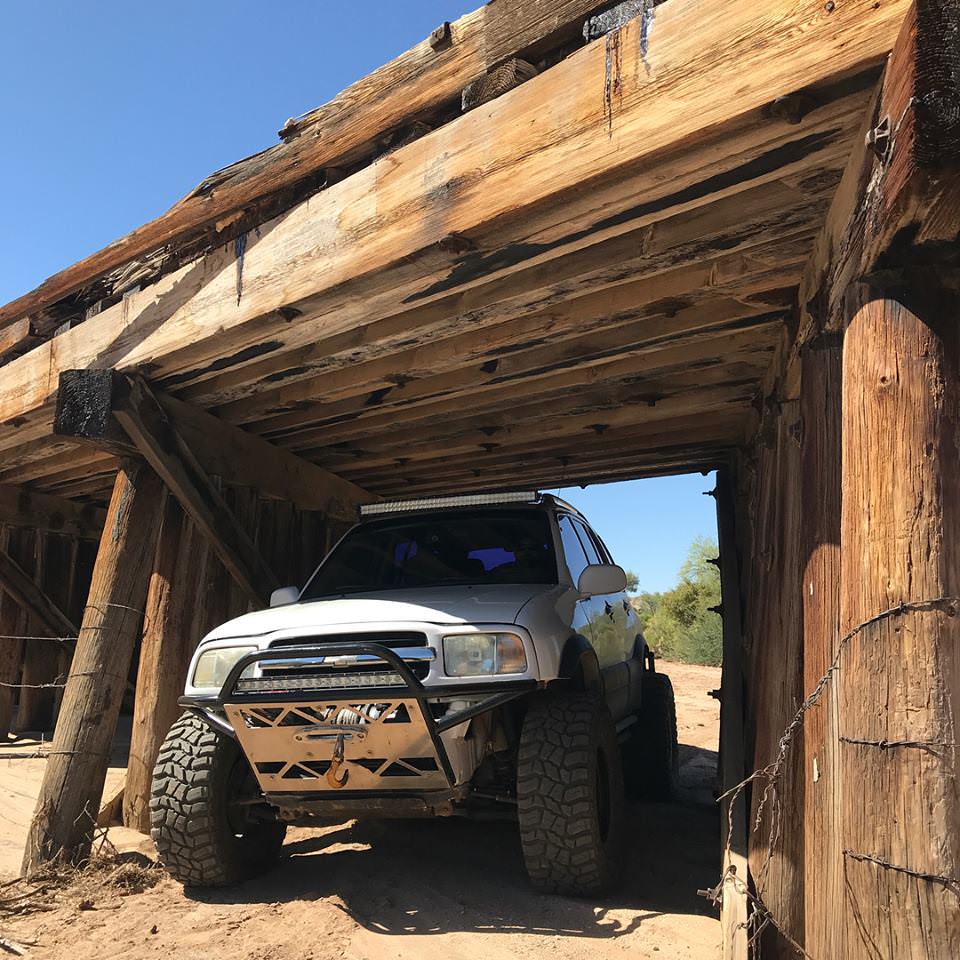 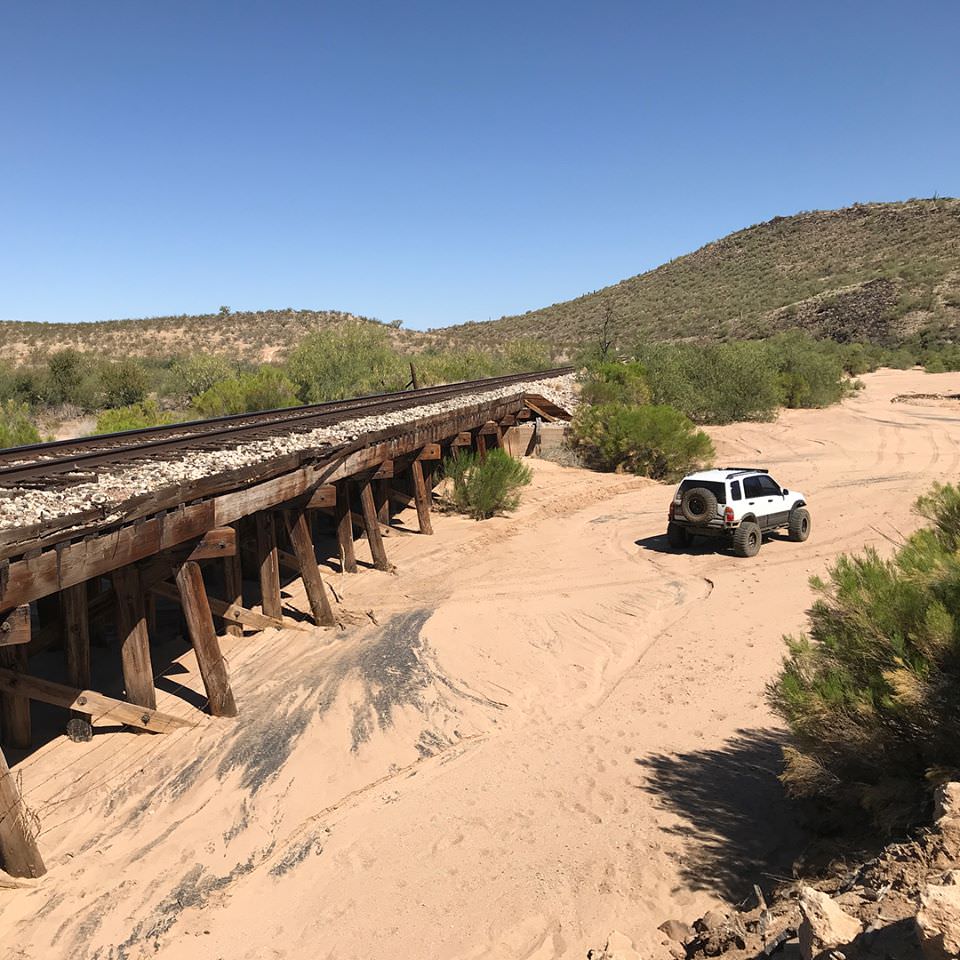 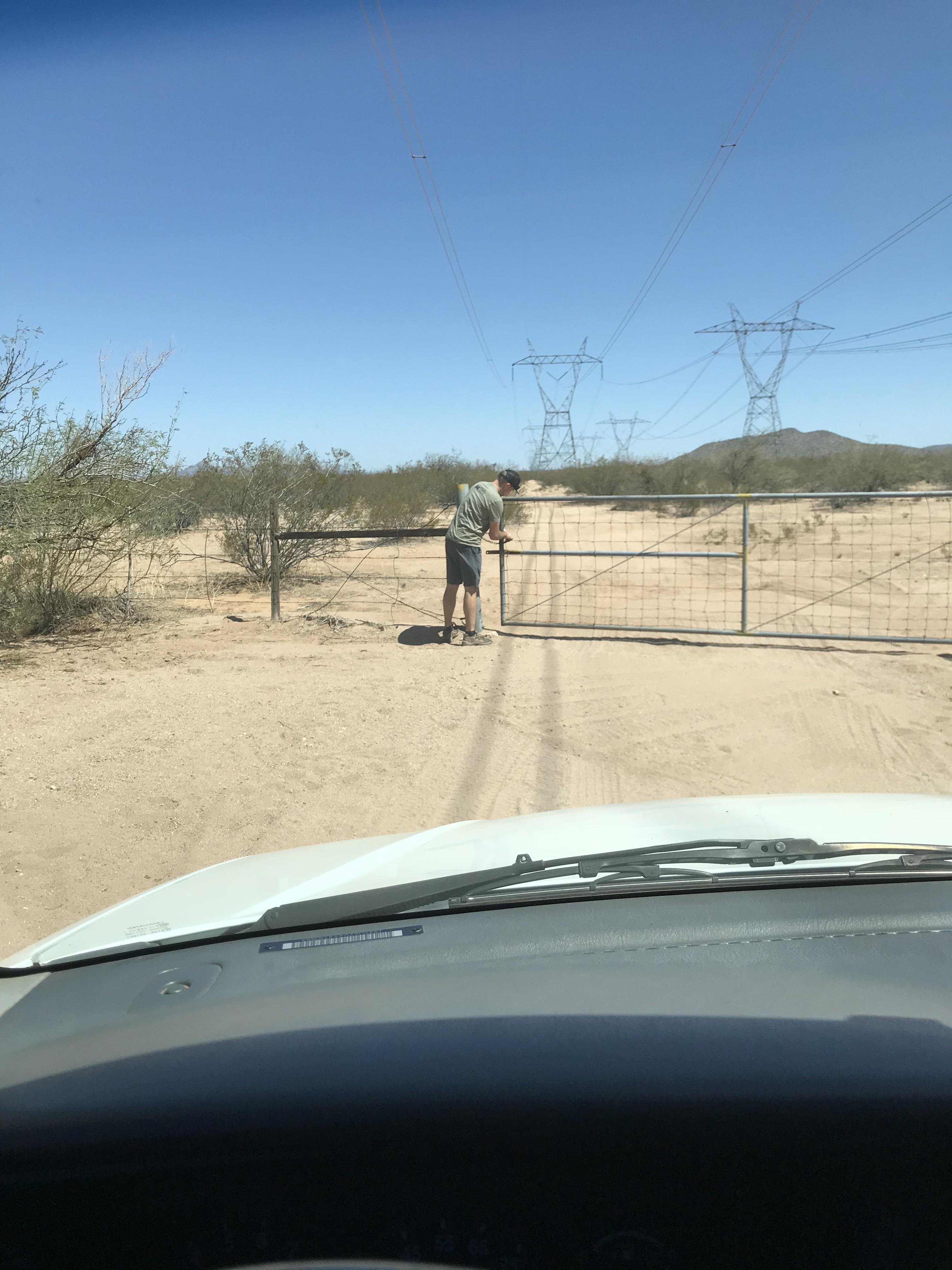 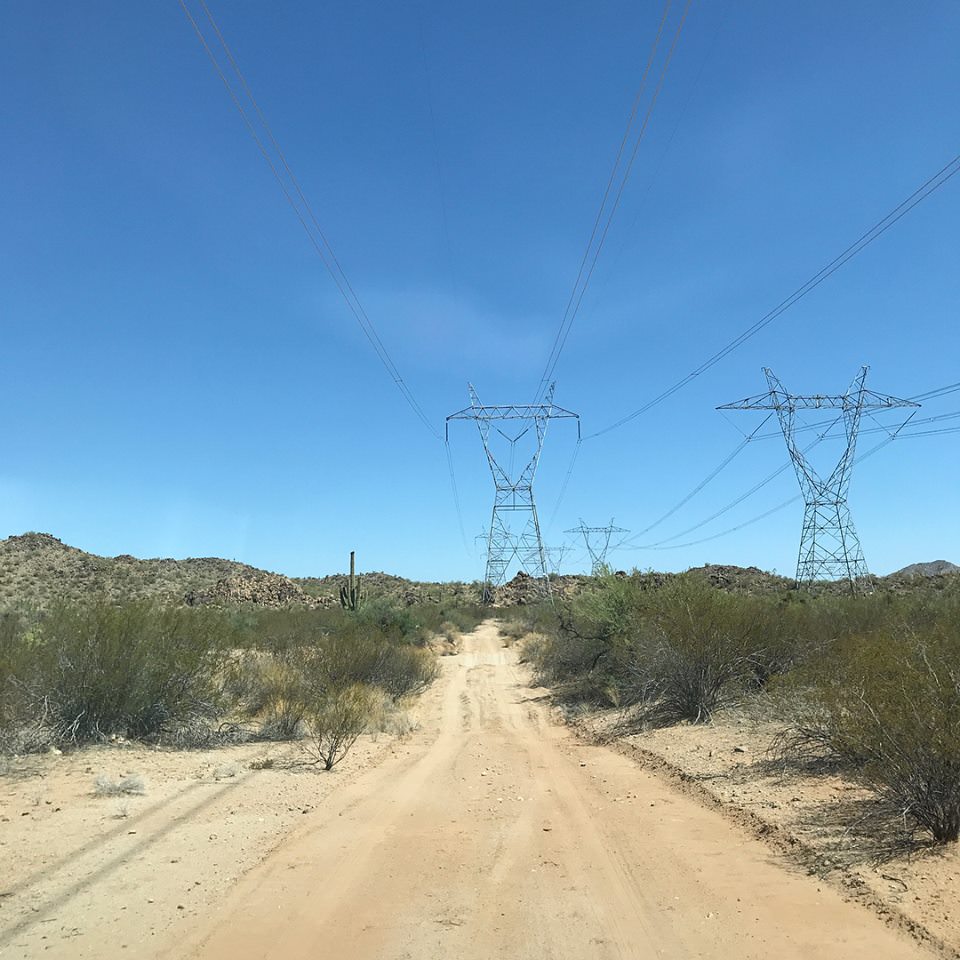 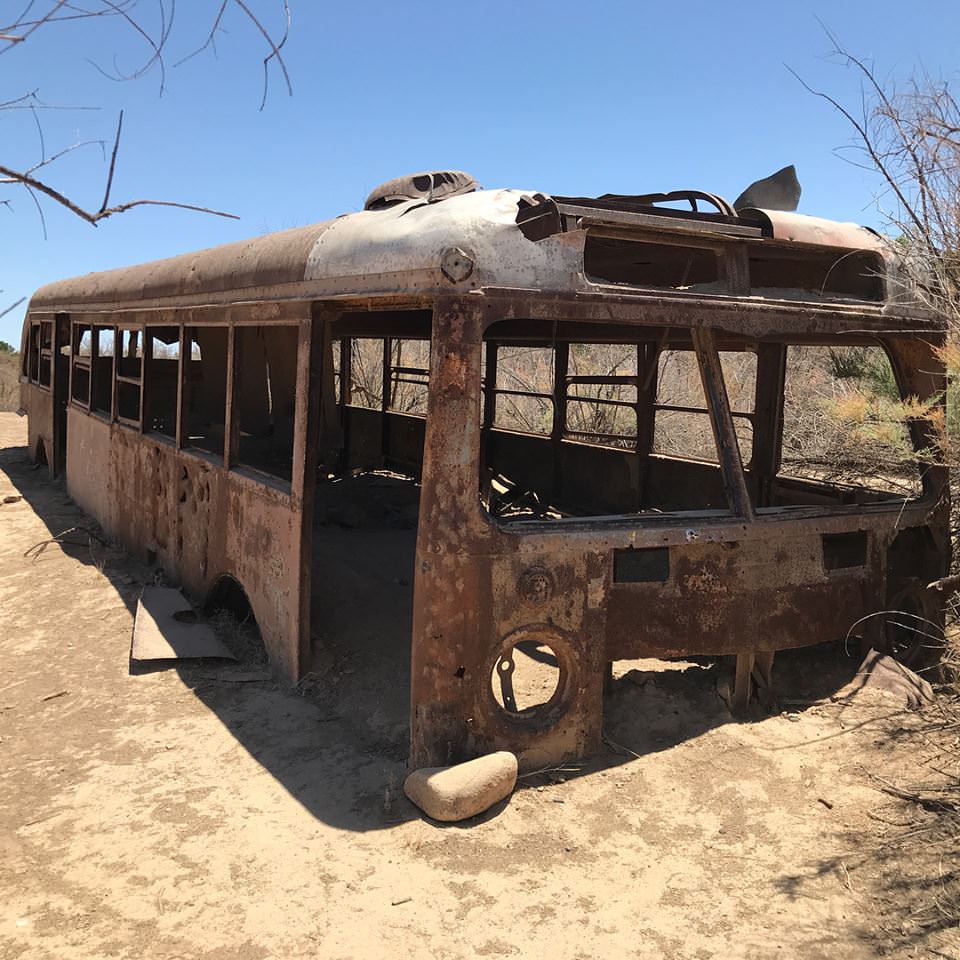 coming down into Yucca Valley 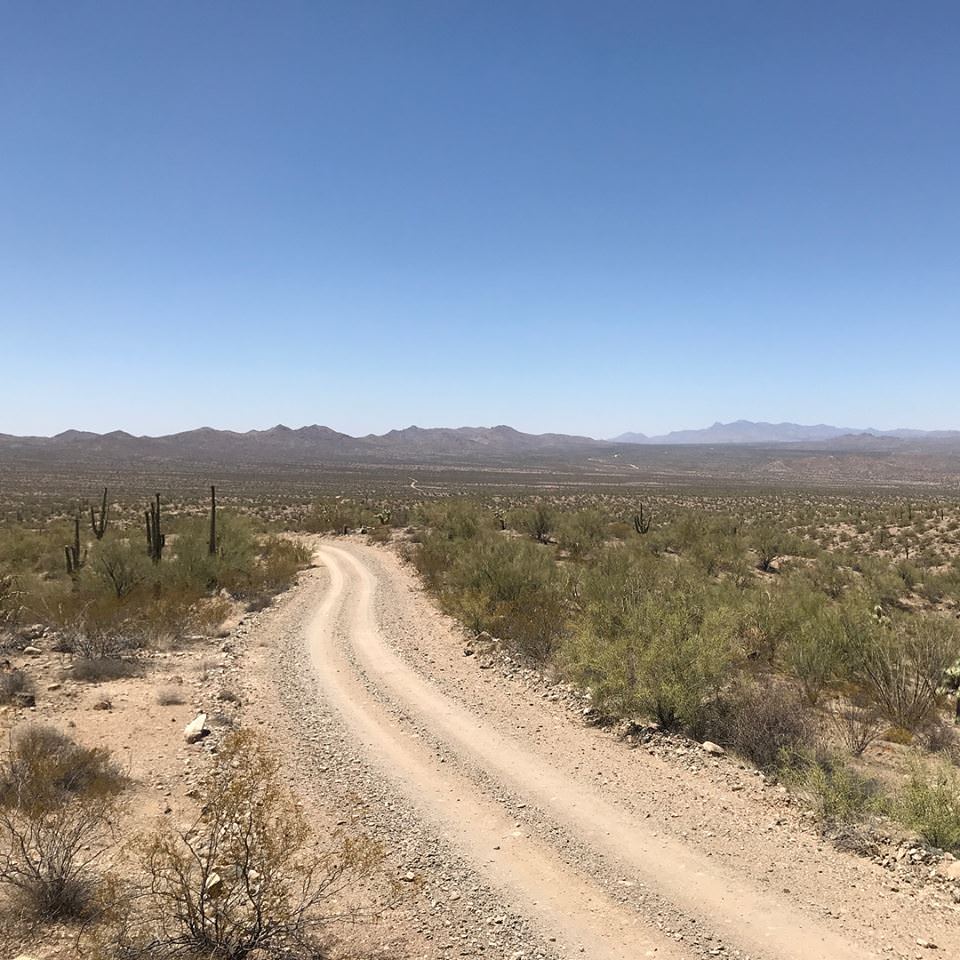 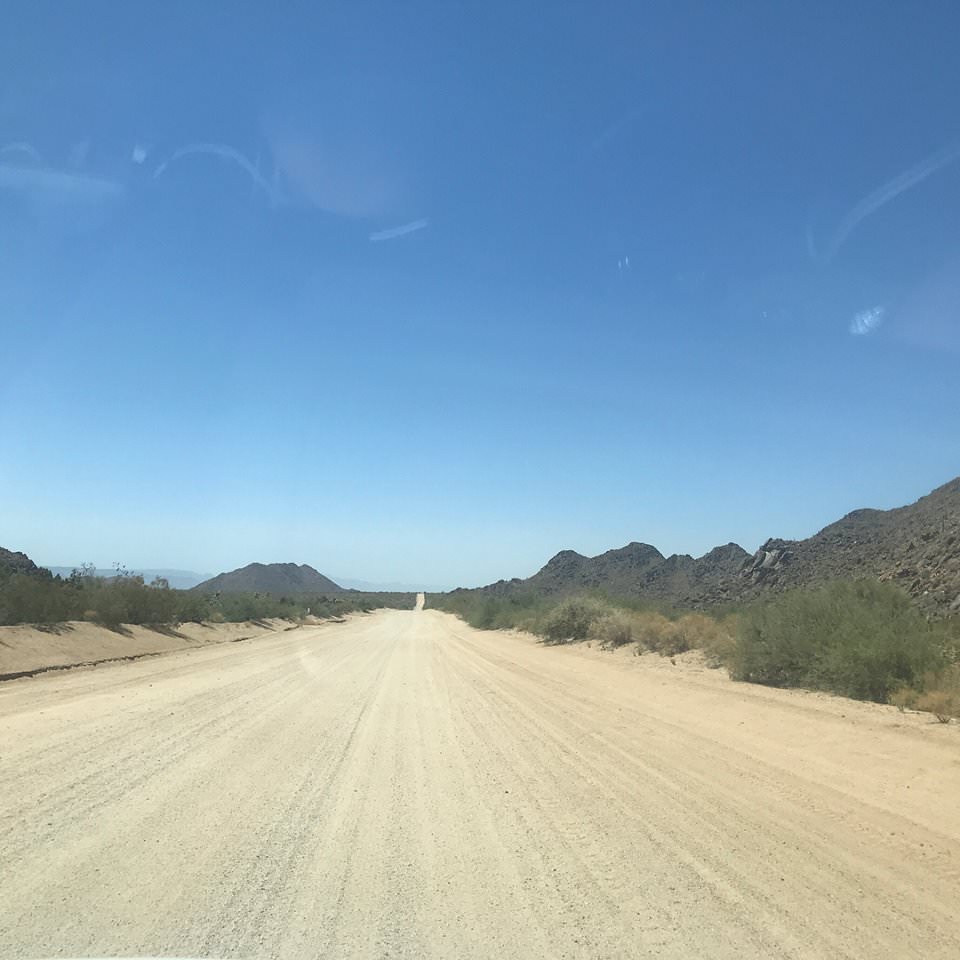 We were prerunning routes to get to Laughlin for a trip i eventually want to do. I was promptly told "no, we are overlanding". i said "fucker, thats what the fucking hipsters call it accept they spend money on everything else but making their shit go fast in the desert". it was then decided we were "Brolanding". fuck it, close enough.

Some point ill start on the front end. right now it has junk ass suzuki shit with pontiac grand prix rear struts in the front end for more travel. Front will get a ford 8.8 rear IRS diff from a 2010 exploder (dual pinion mounts) off set to the pass side, 930 inner CV's, toyota outer CV's, home brew axle shafts and stub shafts, 8" 2.5" SAW coilovers with fox 4" 2.0 bumps, 3 or 4" over arms, and built upper control arms. Really want to get a set of fox 2.5 for the front to make them all match. This is all being built on a spare front frame section i have and then will get swapped into mine but cutting my old frame section out and welding this one in. way easier to do that so i keep beating the piss out of this rig.
Last edited: Jul 2, 2018
Reactions: BMH

trying to build it all

That thing is pretty rad

Monday I had a new exhaust put on. Cut the old smashed together y pipe out and ran 2” into a 2.25” collector all the way out the back with a cheapy chambered round muffler from summit. In high school, I’d probably love how loud it is and it makes cool noises in the upper rpm’s but it’s annoying as fuck in a DD. Drones in the cab and too loud. Plus the guy ran the exhaust too close to where the axle would be at full bump and it hits 1” before. So it’s going back in tomorrow to have that redone.

From our trip last weekend, I started on revalving and respringing the shocks. Switched the 100lbs spring to 150lbs spring and made a major adjustment to the valving. Initially I had a .950 dia .010 shim under the second biggest shim for a flutter. I had a feeling it would make things too soft but wanted to see how it did. The conventional stock was a straight .010 with the last two smallest at .012. Everything was too soft. You could watch the back tires in the side mirrors just fucking bouncing around with no control over accel bumps and ruts. 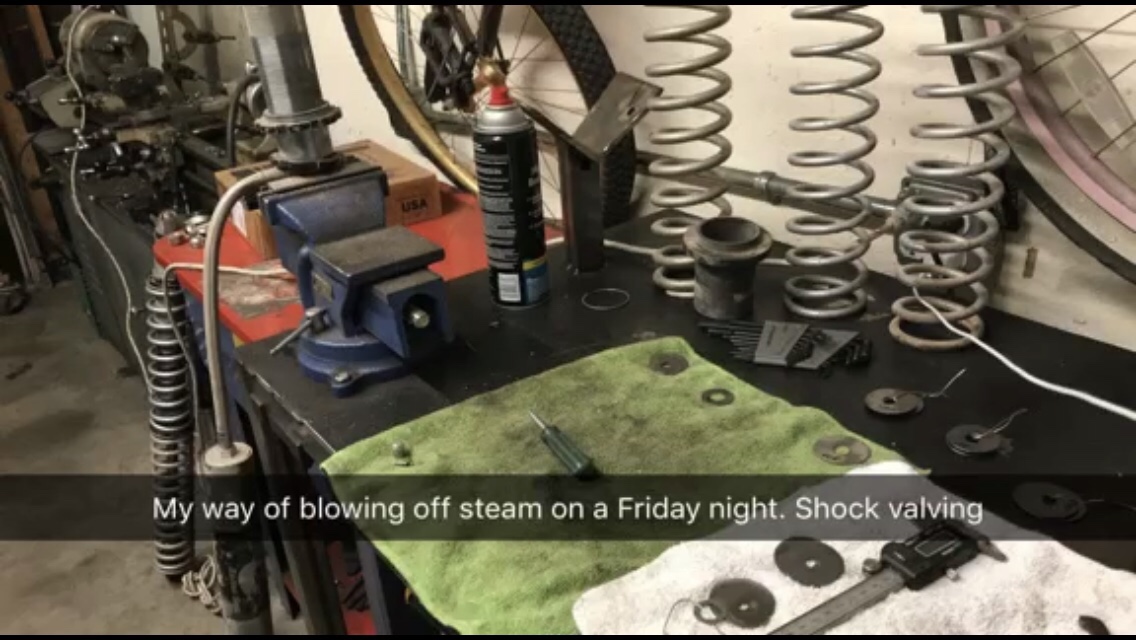 Changed the flutter so it’s under the largest dia shim and left the top shim .010. Then went .012 for the next 2 and the last 3 went up to .015. I also dropped the crossover nut down 1/2” (max I can go before coil bind). Going to find some desert some time this weekend and go play to see how the changes worked.

I’m really itching to do a rate plate just for the fact to try it but I’m convincing myself to see how I can make the conventional stack work first. Still need to do the front end anyhow so it’s not seeing any real abuse yet

Trying to limp the front end along till i can get the new one setup and done. LF strut was shot. pissed all the oil out after my desert excusion to kingman. ordered another cheapy off Amazon to mod and install. im surprised these last as long as they do for getting the piss beat out of them off road. hard to be 30 bucks a strut. took the old one, cut the mount tabs off and used them as templates to hog out the new strut mounts. then welded some washers on the bottom holes to keep things from moving. only welded half way round to keep heat out of the shock body and frankly 0 fucks given as the old ones held just fine. tops have no washers welded so i can adjust camber.

super mad brotastic travel boys. dont fap too hard to this boys. those coil spacers might send some right over the edge. 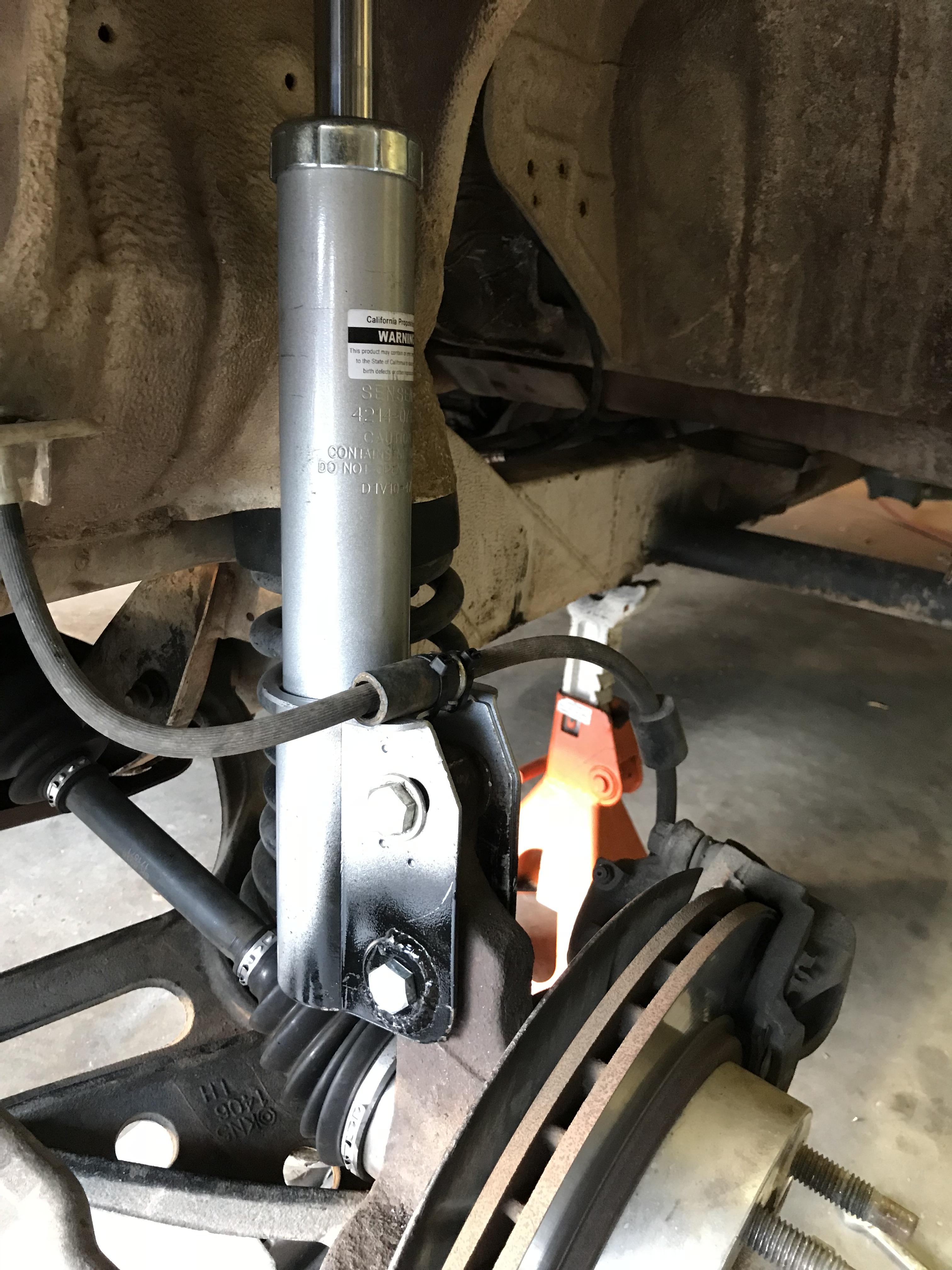 Also, in my infinite wisdom of clearancing parts. i made the pass side diff mount thin to make a stub shaft fit and allow me to run a bolted on cv axle instead of the stupid cir clip style pop in ones (requires removing the whole fucking god damn front suspension to get the axle out vs 4 bolts, outer hub and out comes the cv axle). when we did our desert run, i had this bright idea half way through to flex it out on some concrete wall for a poser pic to show to all my broverlander buddies. tire starts to climb and BOOM, snapped the diff mount and cv axle. Yesterday i tacked it back together, pressed out the old bushing and started plating it up and rewelding. Thing is cast so before full welding, preheated to 500* and buzzed away, then slowly brought it down via MAP gas torch over a 30 min period. no bad noises and yes its a shitty ass way to do it but if it holds, it holds. If i dont, fuck it, shove the bitch on the side yard and start suspension hacking.

shit ass welds and shit ass prep cause no care. just up the heat. 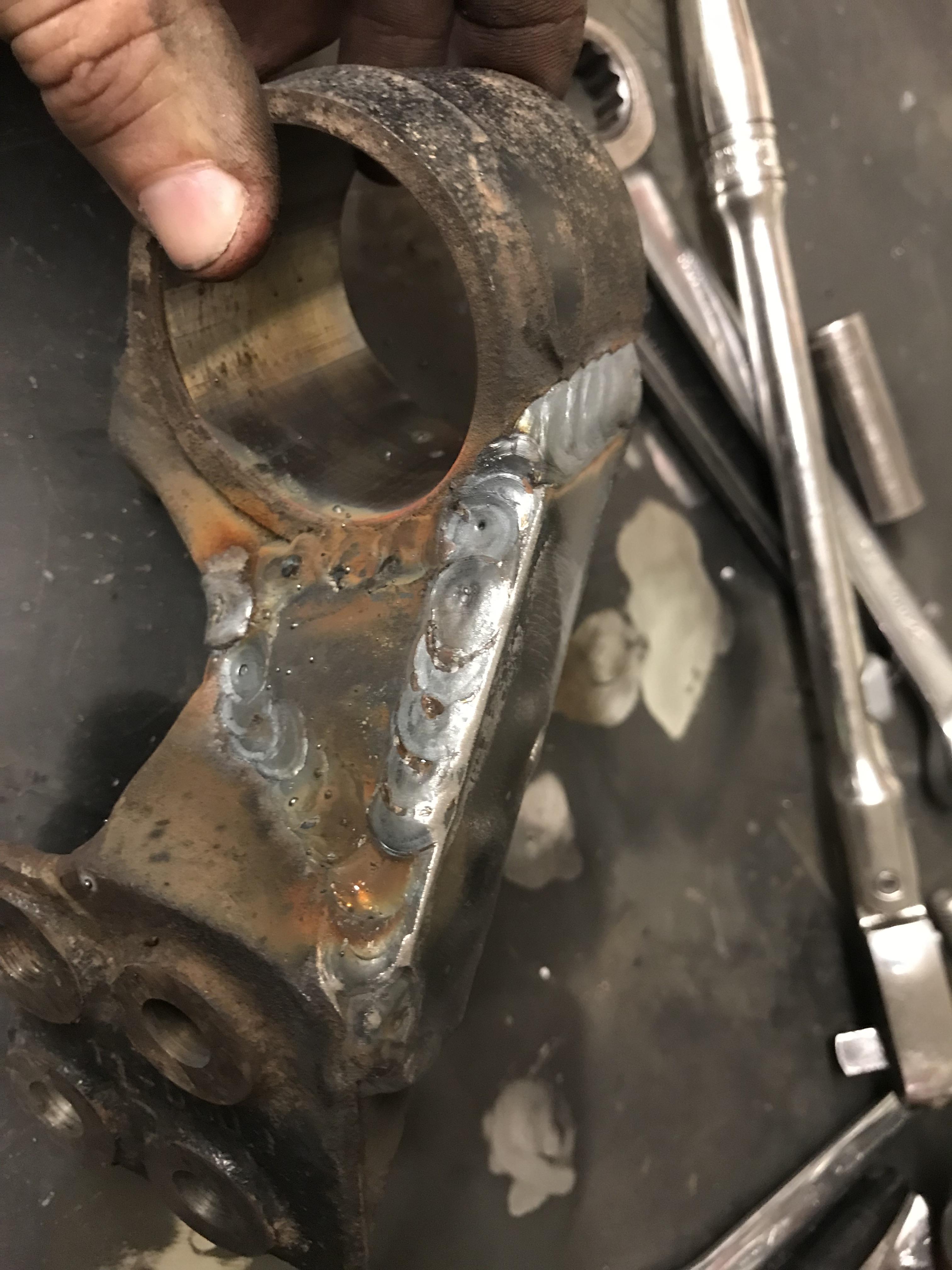 Now off to oreillys for another warrantied out cv axle. think this is number 6 or 7?

I love this build ahha. Keep at it

Last night i got the rear axle adjusted so i can put a DC style shaft in and have the pinion angle correct. pulled the shocks and set pinion angle. Then started the 1500 times cycling the rear end to check for clearance. i thought for sure i would have to clearance the truss to make it miss the gas tank mounts near full bump but after sucking the links in and checking tire clearance to the front of the fender, shes clear by about 1/4 - 3/8". the rear brake hard line comes real close so i bent it in some and added another holding clamp to keep it out of the way. twisting the axle around screwed up my shock mounts and made the shocks hit the axle pretty bad at full droop. That was the other half of my battle. fix wasnt too bad though, just pie cut the mount with the plasma, hammered it backwards 1/2" and up 1/2" and we were golden 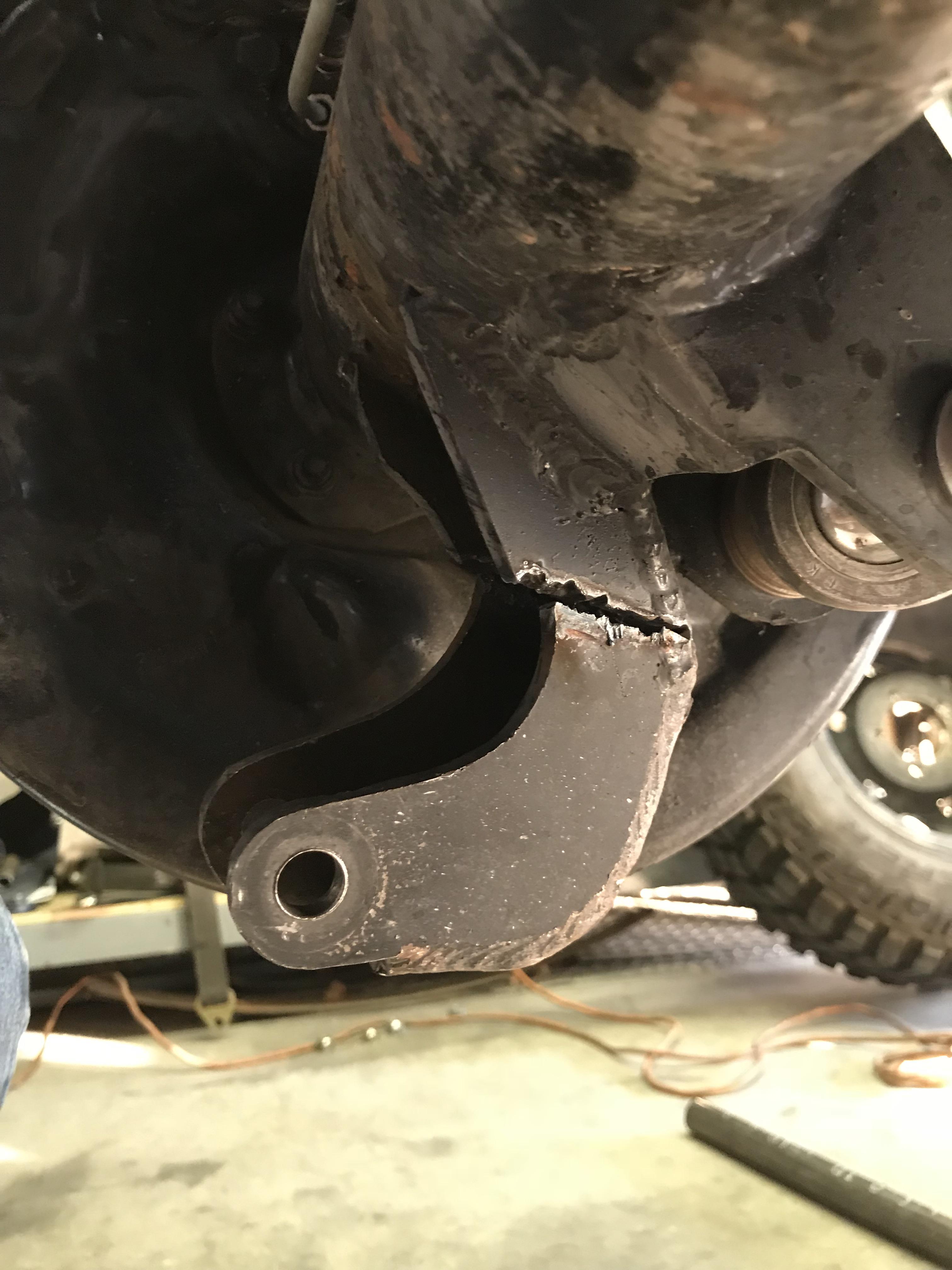 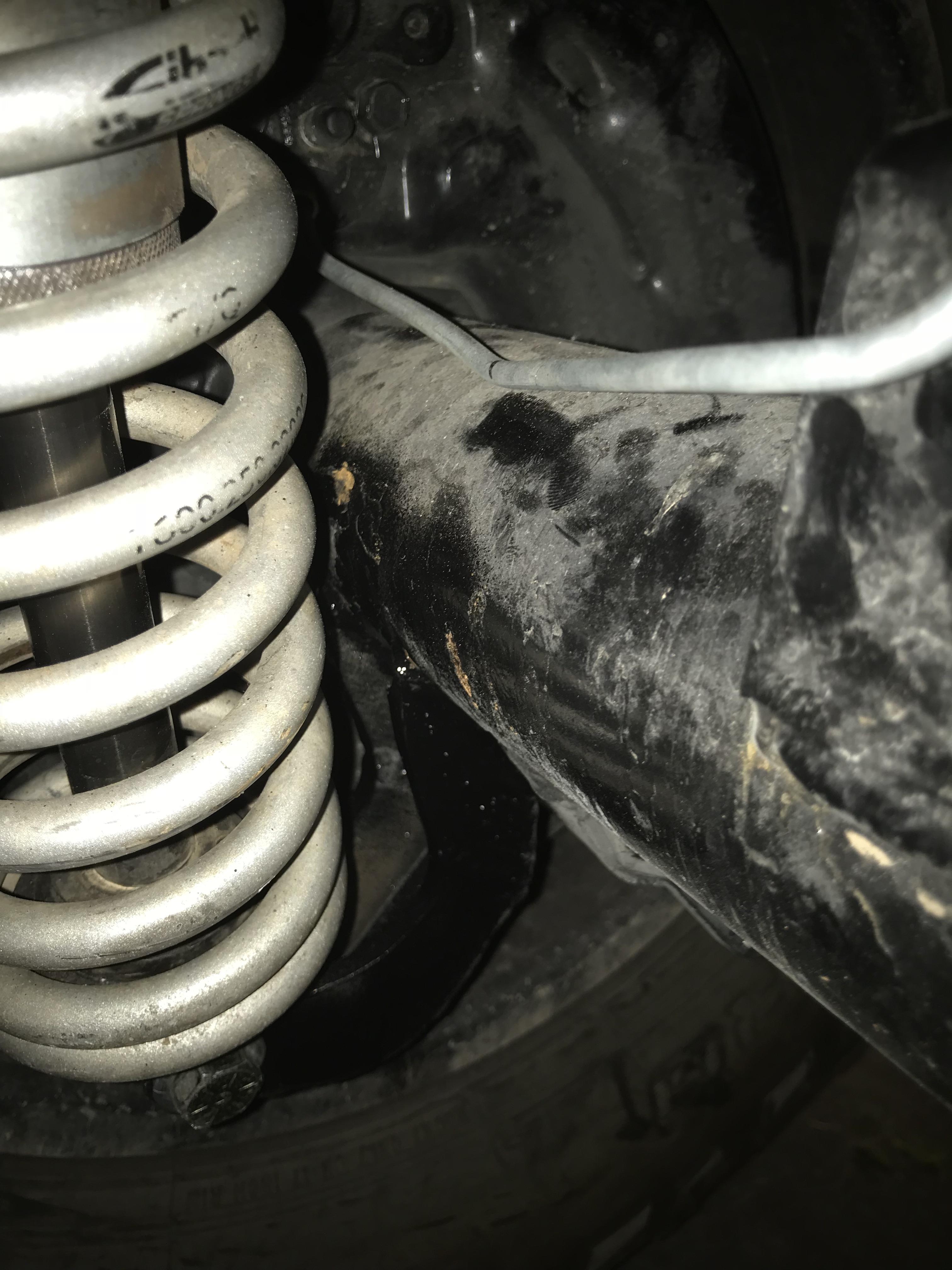 i also ditched the e-brake cables as they kept hitting the driveshaft and it will not do ken block brokana shit as they keep popping off the ends of the lever that connect to the shoes.

then yanked the driveshaft to drop off tomorrow and change to the new one.
Reactions: DirtFiend602

Nice! You should add an overlay plate on the shock mounts that wraps around the axle more. You'll rip the mount off with that much leverage from the length of the shock mount and small amount of weld area on the axle tube.

That’s just one side. The other side goes 1/2 way around the axle tube and is plated to go with. This side is limited due to the link mount. Can’t wrap up the other way more due to the coils contacting them as suspension droops. I have some ideas to add more strength if the time comes. This ain’t no fucking race truck, it’s built on a pos jap frame that is made from old nuclear bomb shells. It won’t hold up to shit
You must log in or register to reply here.
Share:
Facebook Twitter Reddit Pinterest Tumblr WhatsApp Email Link