Last Sunday I started repairs. Started out pulling the 4 prong 220v plugs out of the garage wall and put 3 prongs in place (since thats what all my tools use), then started working on my air compressor. The compressor is a horizontal tank so i put some casters under the feet and made it self sufficant to hold all the air "stuff". by this point, my buddy showed up and gave me a hand for the day. He had also brought over the stub shaft i had made him to do the driverside cv axle mod to his GV until i had told him the rest of the mods needed for it to work lol. He graciously gave it back in my time of need. mounted the air dryier to my compressor, mounted the air hose reel to it, put a 15ft extension cord on it. plugged it in and good to go. nice to have air back!

So we started into the tracker. front diff had to come out so i could get the rest of the pieces out of the diff. 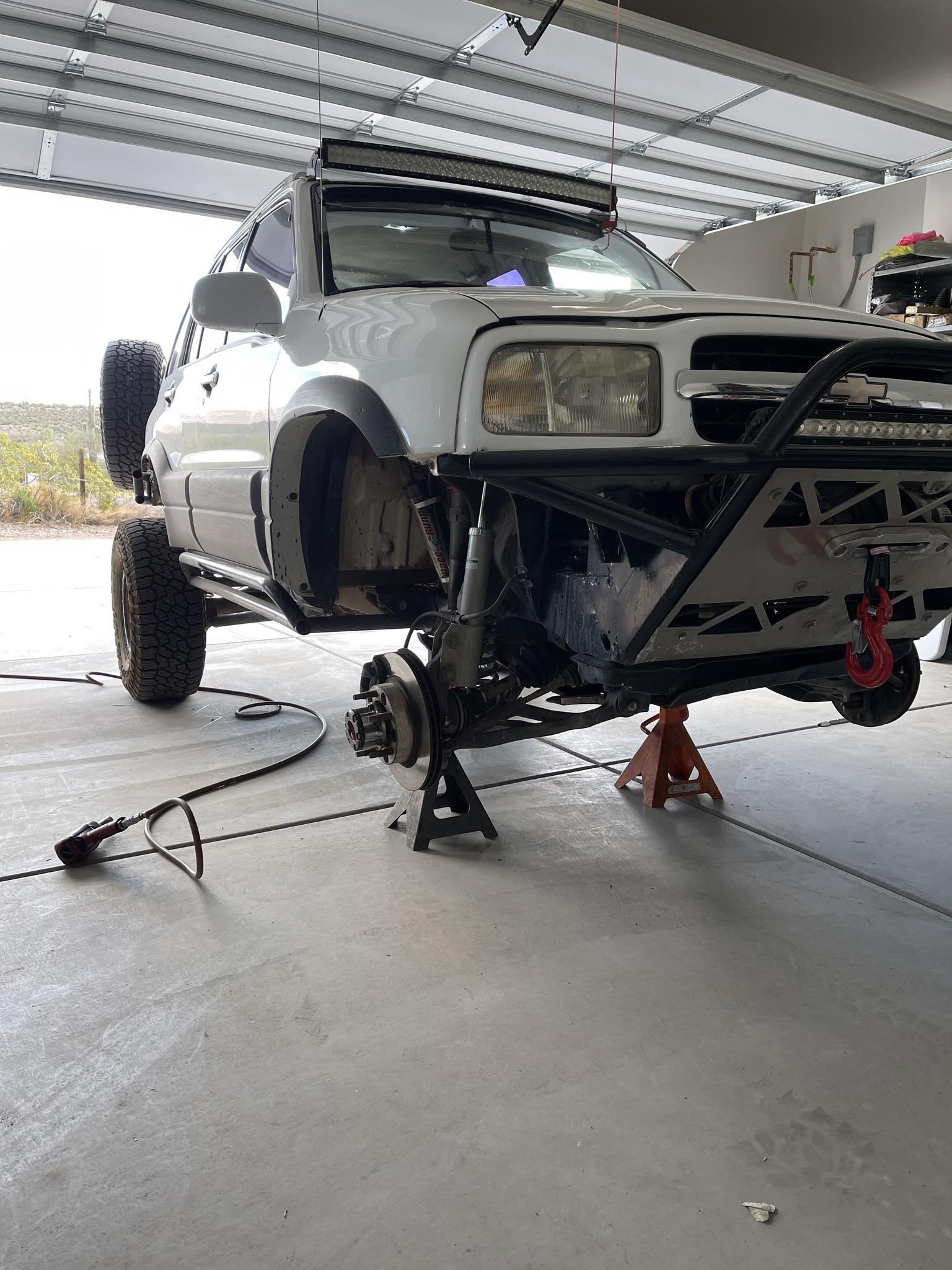 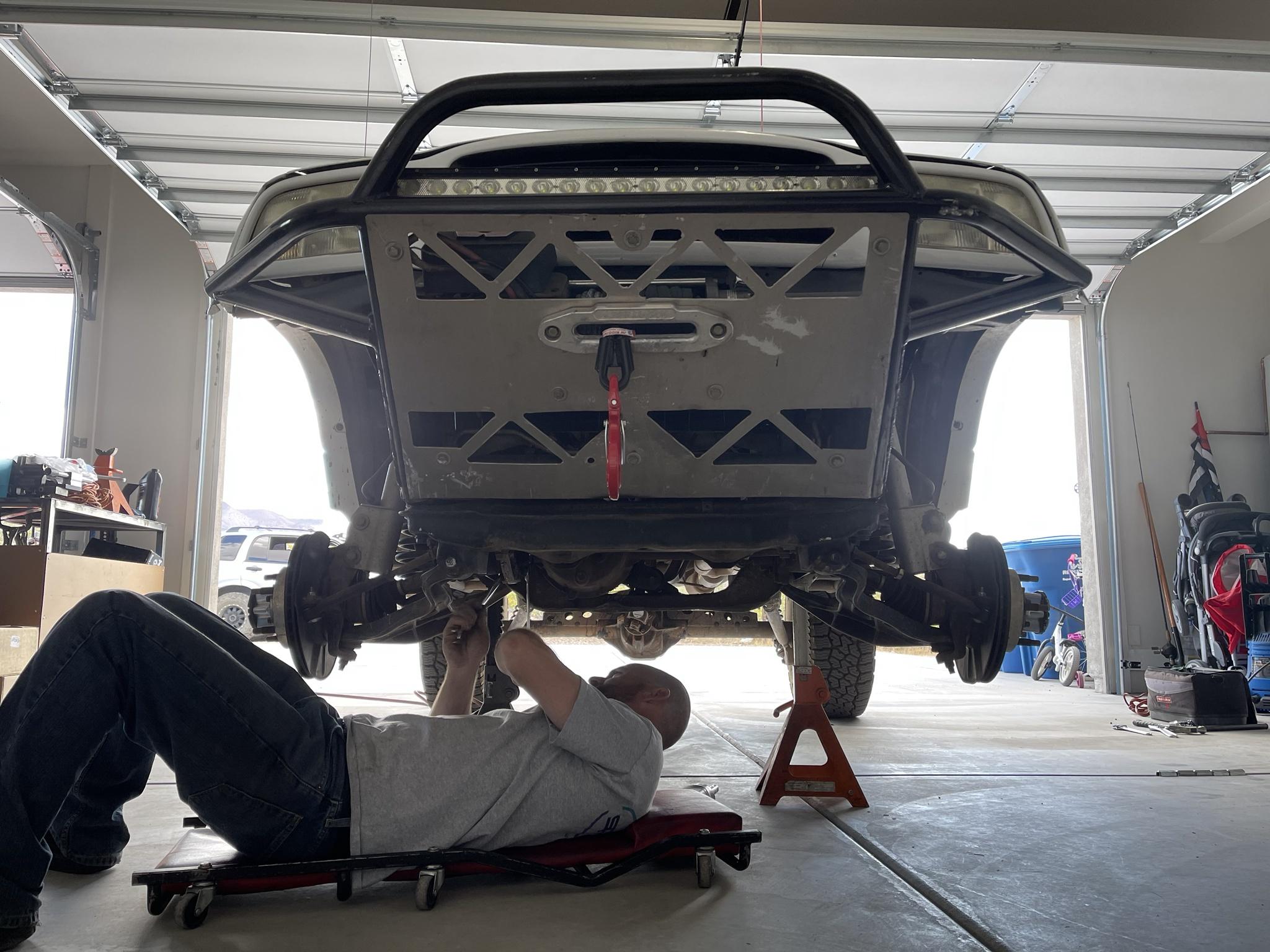 got the diff out, pull the third out and used a magnet to pull the pieces out. had to pull the carrier bearing preload adjuster out as well to get all the metal pieces out. My buddy cleaned up the diff housing as i worked on the third. Knocked the last bit of splined chunk out and good to go. luckily the carrier didnt get tore up and only got a few scrapes. helps i didnt continue to wheel it like a retard either. plus side is, i know welding the flange on is plenty strong lmao. 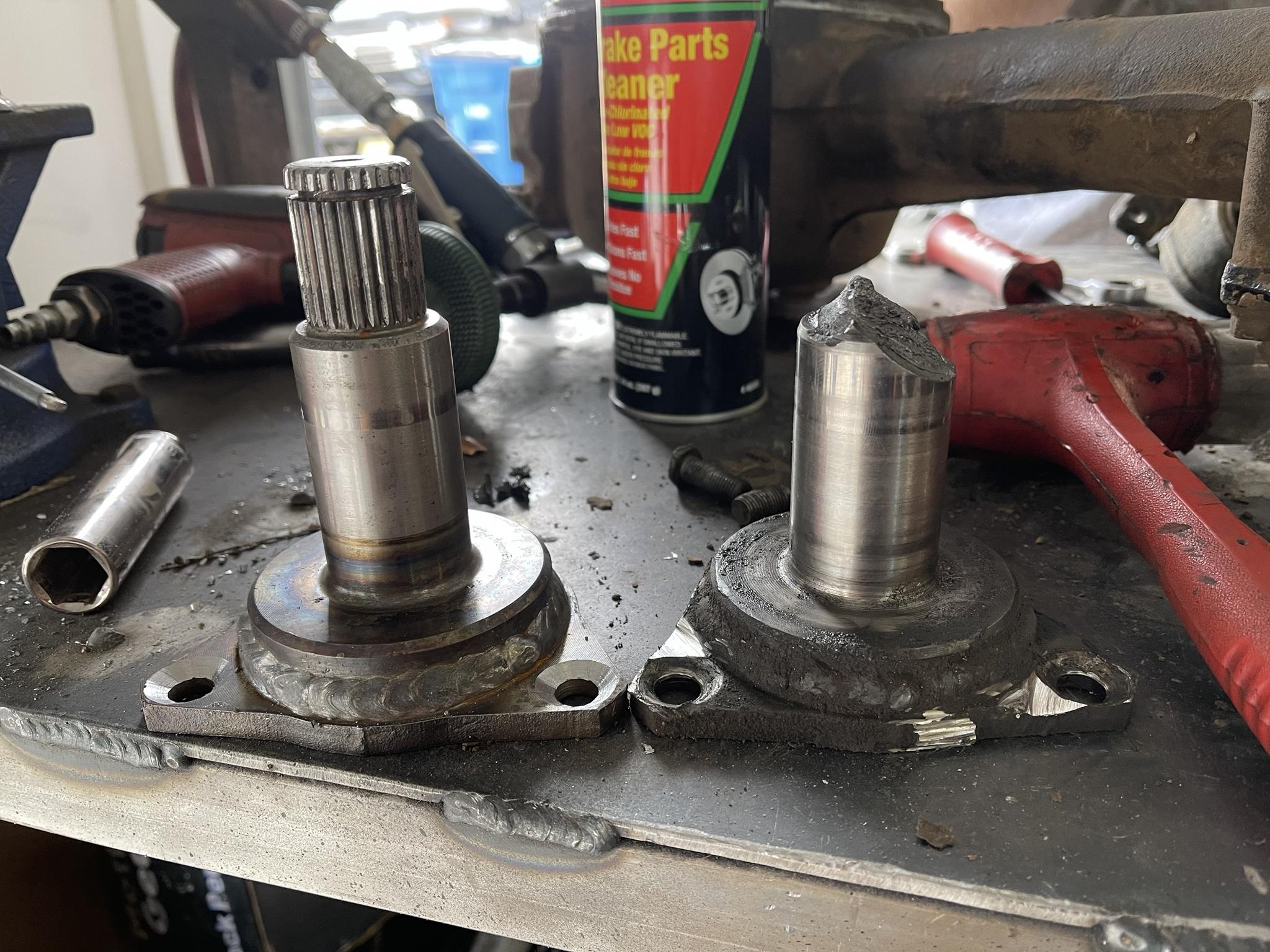 Next up was the diff mount. the whole reason this stub shaft broke was due to the diff mount bolts backing out and hitting the stub shaft. they had done this before but i loctited them in. Problem is, i dont think i got the threads clean enough nor did i get enough torque on them. anyhow, they started backing out, finally caught the flange hard enough i tried to make my climb and SNAP. in doing this, it broke the mount at the top two bolt holes. The stock mounts are cast and i had already modded them pretty heavy to fit the toyota cv's. surprisingly, it broke no where near my welds. I decided to cut the cast off the mounting bolt side and use some 3/8" thick angle iron i had. marked it up and had my buddy cut it. as he did that, i took apart the tracker to toyota cv adapter than he cut the welds off for me so i could transplant that to the new stub shaft. he cleaned all the threads up nicely on both the bolts and internal threads for the loctite to take hold. i bolt it down and then used "Miller loctite" on the bolts.

So my buddy get the piece cut, i mark hole locations and it was at this moment I realized.... I fucked up. i had marked the angle cut the wrong damn way. So i cut a new piece the correct way and start on "take 2" of this. drill holes and mess up again... realized the upper holes were too close to the angle and the bolts wouldnt sit flat. i also screwed up the spacing. God damn it! take 3! make another and this goes together far more smoothly. tack it in place, we test fit the diff 3 times with little changes each time and get it dialed in. put a piece of 1/8" plate on top as extra bracing and a coat of paint. cleaned the bolt holes extremely well, got new bolts, cut the faces of the 2 lower bolts down to clear the stub shaft, loctite, tighten down as tight as im comfortable with and then added some "miller loctite" where access was easy to remove it if necessary. the stub shaft i made my buddy was also about 3/16" spaced out more than my old one which gave me more clearance while not inhibiting CV performance. 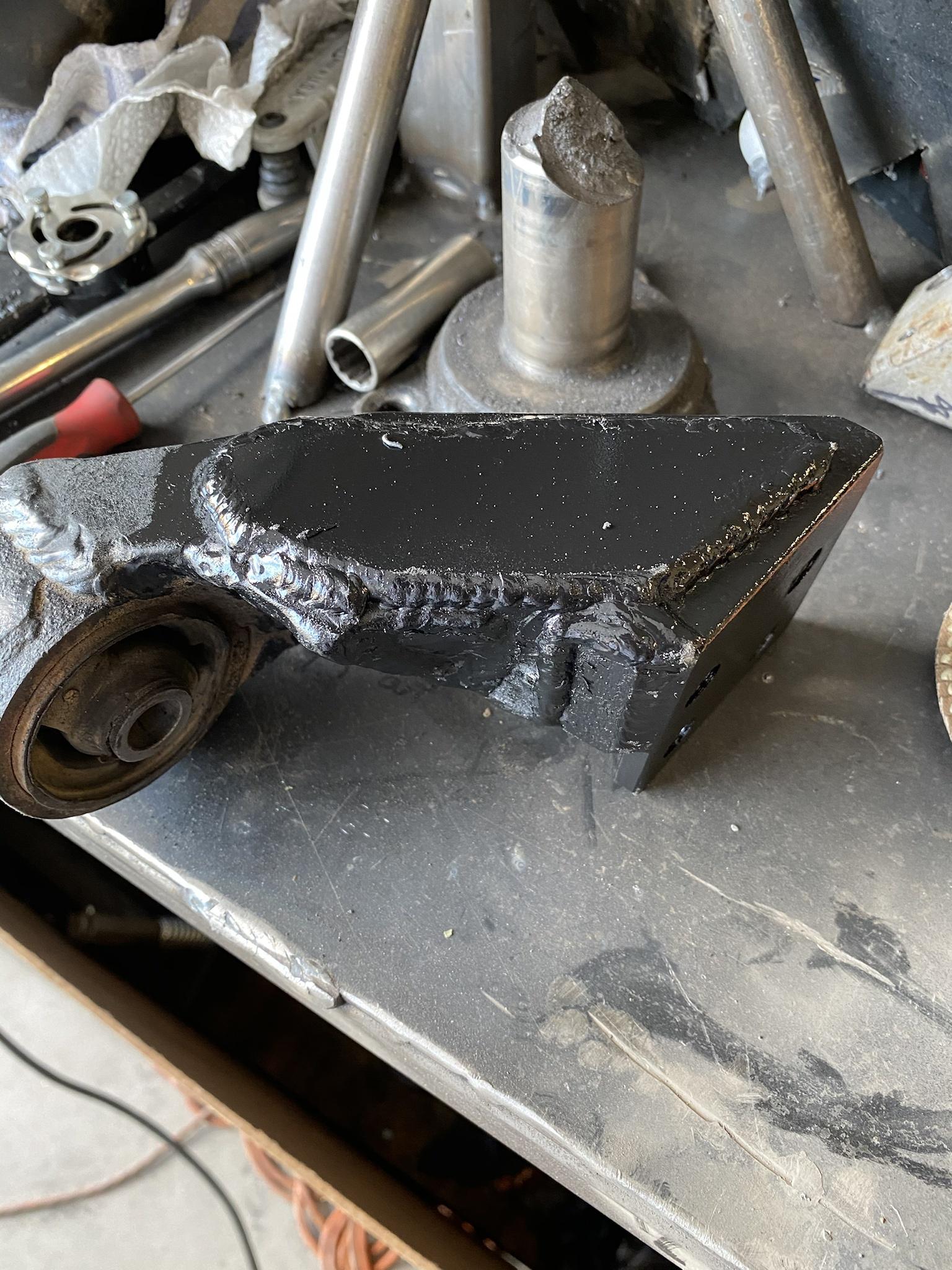 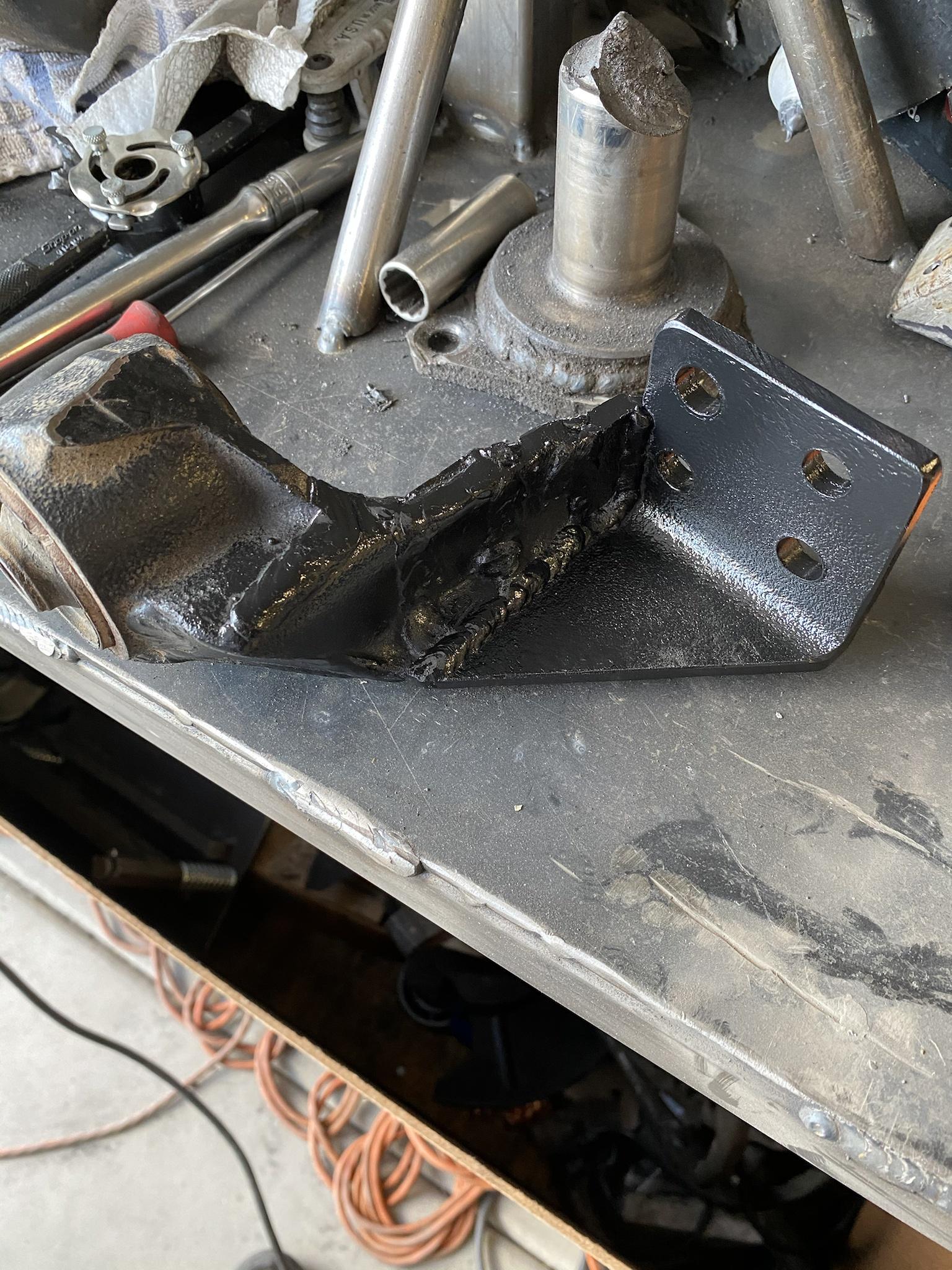 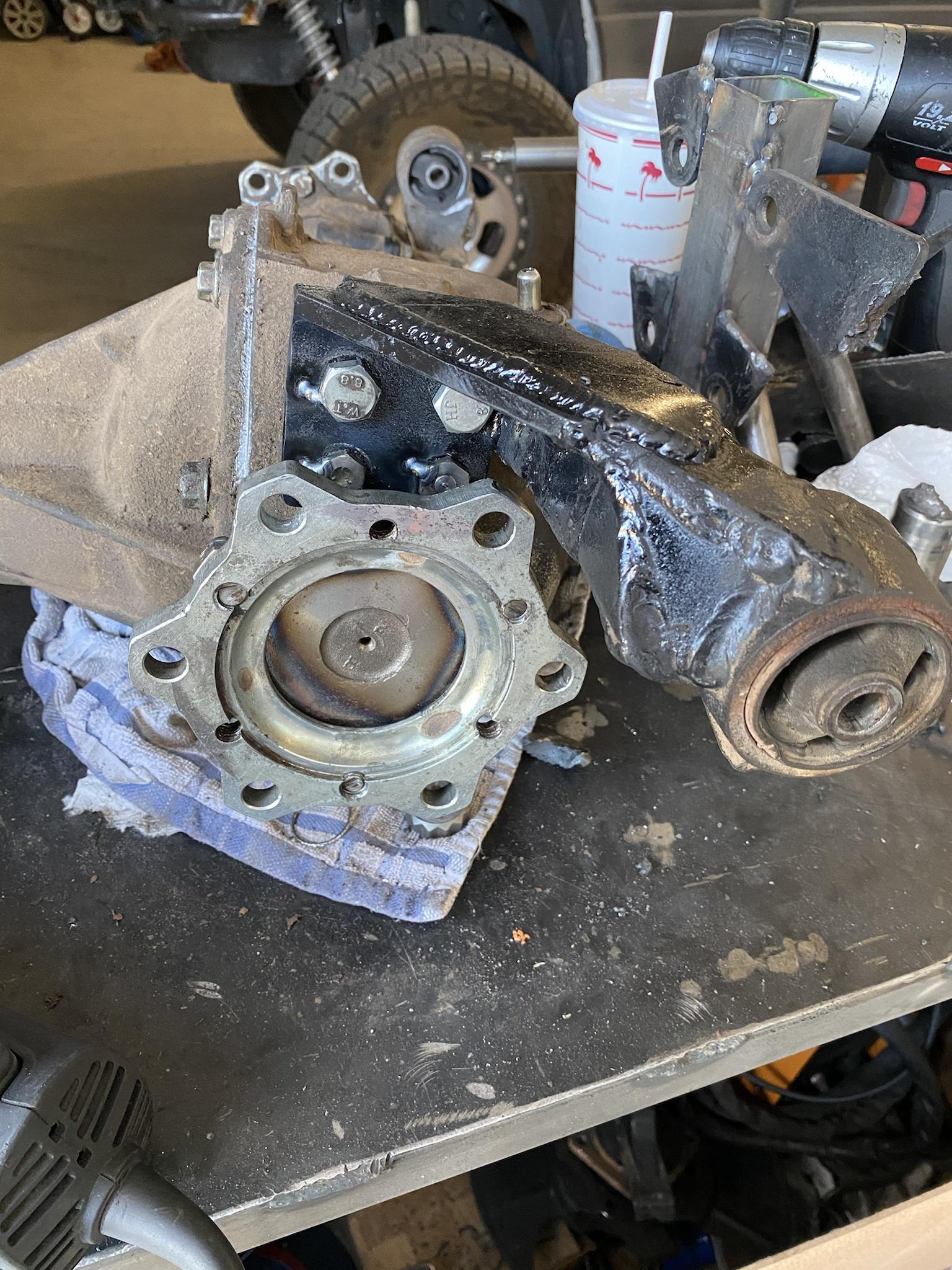 By this point, it was 3 or 4pm and my buddy had to split. i had to now man handle this heavy ass diff back into the frame. Boy that was a bitch. finally got it all in and bolted down, added oil, tested 4wd and we were in business. cleaned up the garage and was inside by 8:30. loooong ass day.
Reactions: bullnerd, Turboyota, the bodj and 3 others

partybarge_pilot said:
Your bolts are shit, move up to 10.9's.
Click to expand...

Pulled the threads on my adapters from 10.9’s. It’s a really shit design but better than stock. I ought to just weld all this shit on and call it good
Reactions: Horunner

Welcome to the world of “Suzuki aftermarket”. Should see these idiots out there trying to lift kits for these things. Fucking Christ is it bad...

84projectford said:
Welcome to the world of “Suzuki aftermarket”. Should see these idiots out there trying to lift kits for these things. Fucking Christ is it bad...
Click to expand...

Saturday i wrenched on her more. think ive about got her back up to shape.

Dropped the rear drive shaft so i could find the fucking grease zerk to grease the center ball of the DC joint. such a fucking dumb spot to put one of these, no way to get to it unless you pull the shaft. 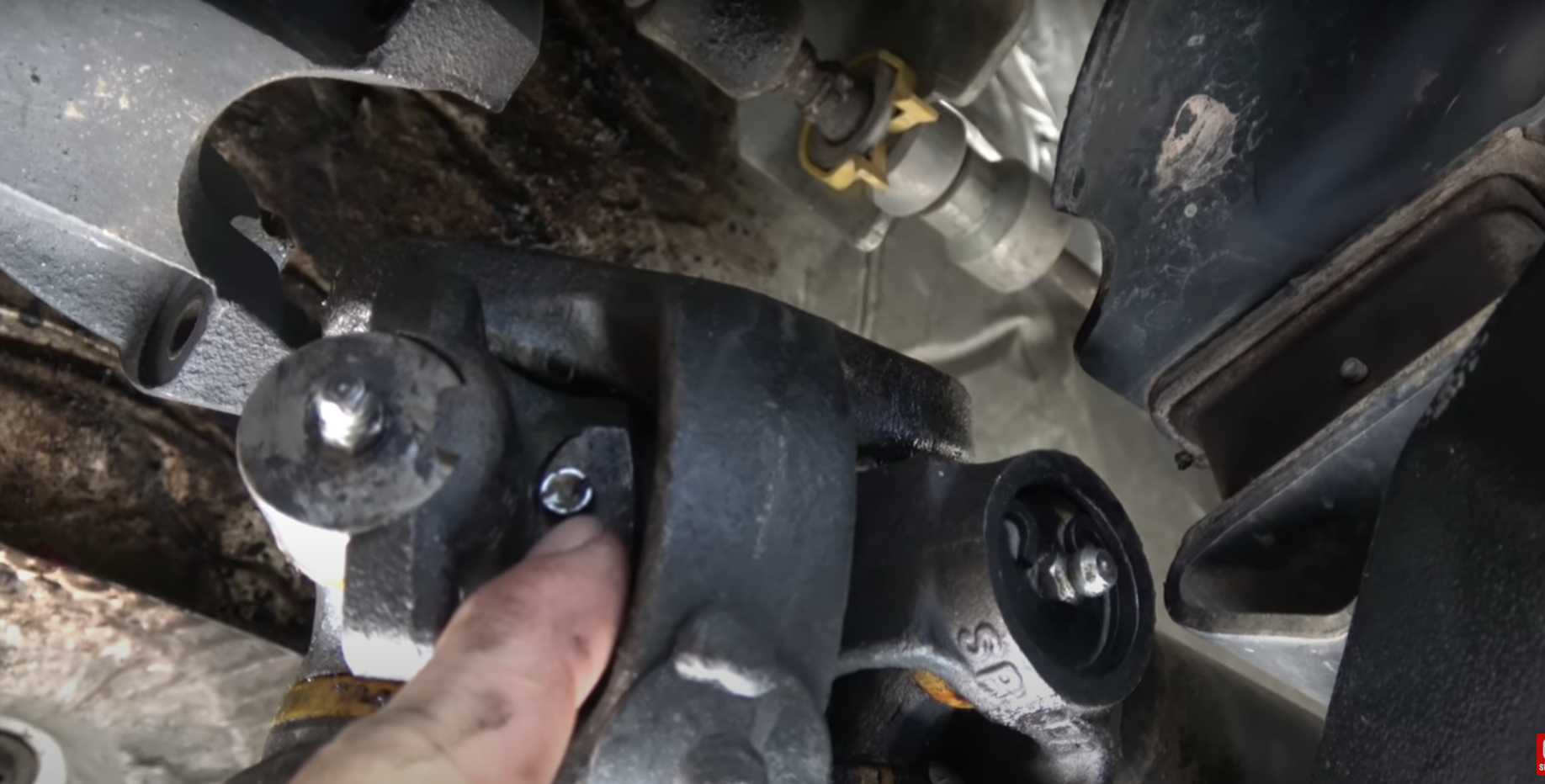 then on to shocks. Pass side IFP likes to leak nitrogen into the oil pretty badly. I ordered up 3 different sets of o-rings from "the o-ring store" to try to remedy this. @Turboyota helped a buddy out and got me mic'ed measurements of replacement seals for me to then decide on sizes. ive put 2 new SAW replacement o-rings in this IFP and it still leaks so i know the bore of the resi cylinder is getting worn and is oversized. I pulled the driverside first just to verify it was good. It was so i threw a new high pressure valve core in it as the old one leaked, cleaned up the light rust the sealing surface of the end caps o-ring area with a scotch bright and put it back together.

Pulled the passenger side off and shes chalk full of nitrogen in the oil. Cracked the resi loose at the top cap to bleed off pressure and then used a power steering puller half to help push down the damn seal head to get the cir clip out. way easier using that half moon to then use the dust cap above the seal head to help give you more leverage and press it down. got the idea from Steveyboys video of the King guy rebuilding his shock. he had a tube made for that though. Anyhow, pulled everything down and drained the oil. The o-rings i bought were the original size the SAW's call for, then a set of metric rings .012 larger than factory, then the next step up in standard. the metric ones worked beautifully, nice and tight going in and then loosened up some inside. took some effort to still move them but waaaaay better than the hot dog down a hallway feeling from before. 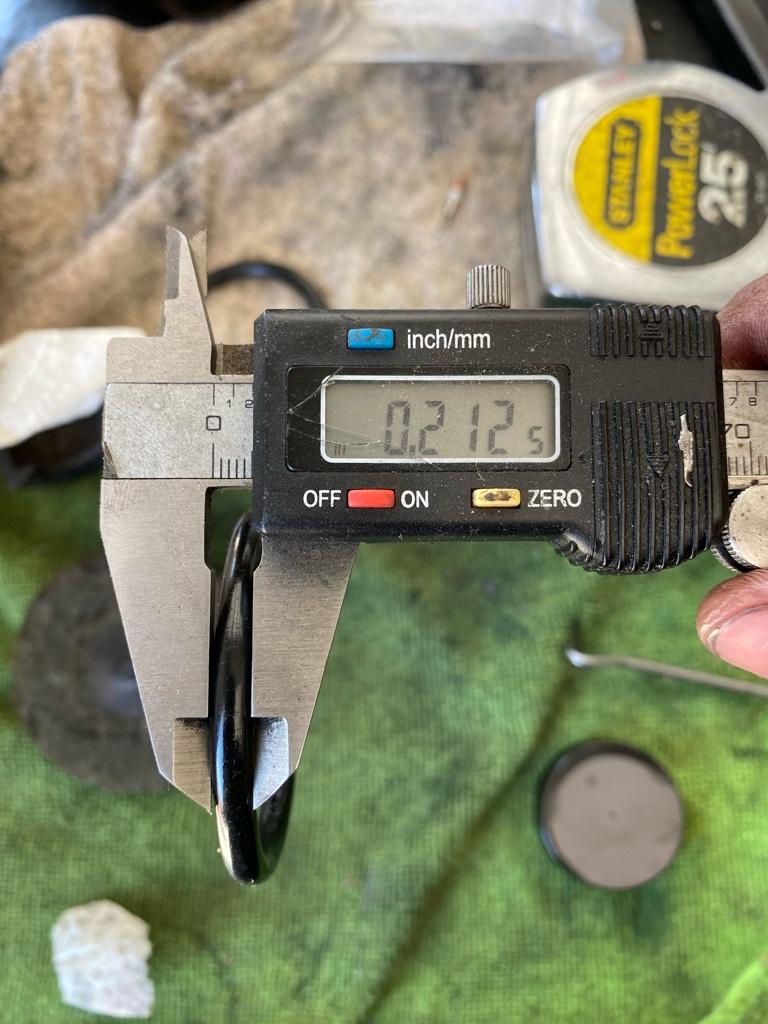 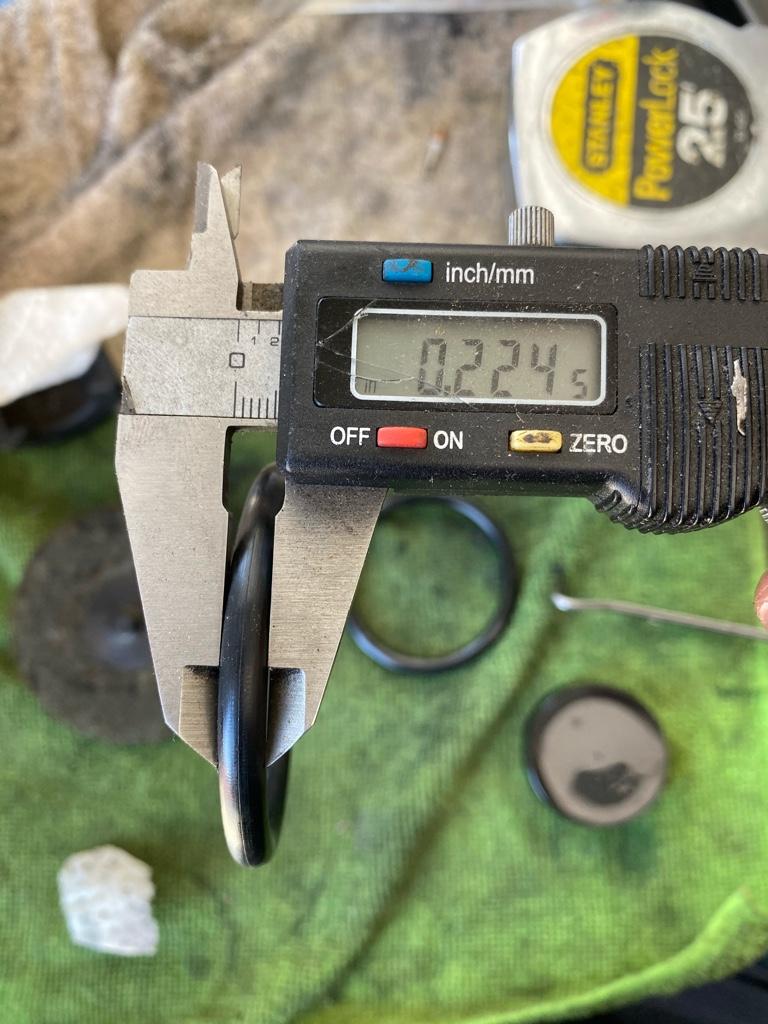 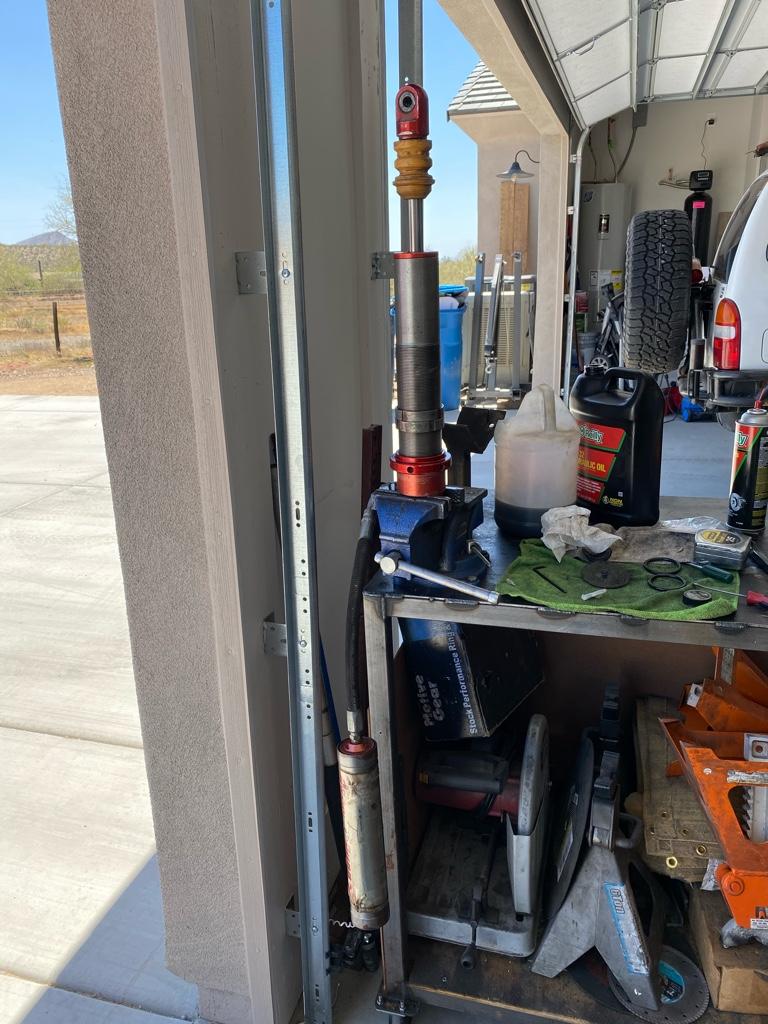 put it back together, charged up and new valve core for it as well.

Then it was on to the driver side front CV axle. it binds at full droop. originally when i set the toyota cv's up, i had a factory CV on the driver side. well apparently the aftermarket one that i have since replaced it with (blew it up wheeling) is about 1/2" longer axle so the damn thing makes the tripod hit the back of the cv and bind. i tried back cutting the star of the tripod 1/8" to see if that would be enough and nope (did that about a year or so ago). I raised the wheel up 1/4" from full droop measuring off the strut and the bind went away when spinning. I figured i could take 1/4 off the bottom of the strut mount bushing to suck the suspension up 1/4" and make it all work. Pulled the mount out and tried to devise ways to hold the mount. the fingers on the chuck just aint long enough to properly hold the mount and it wobbles something fierce. I figured i could then take a bolt that is smaller than the center sleeve, drill its center, tap it to 1/8" npt, slot with an angle grinder and put a pipe plug in it to create a collet essentially. great in theory, not so great when you realize you cant find the fucking 1/8" pipe plugs you had. So i have this cool collet thats in my bolt bin 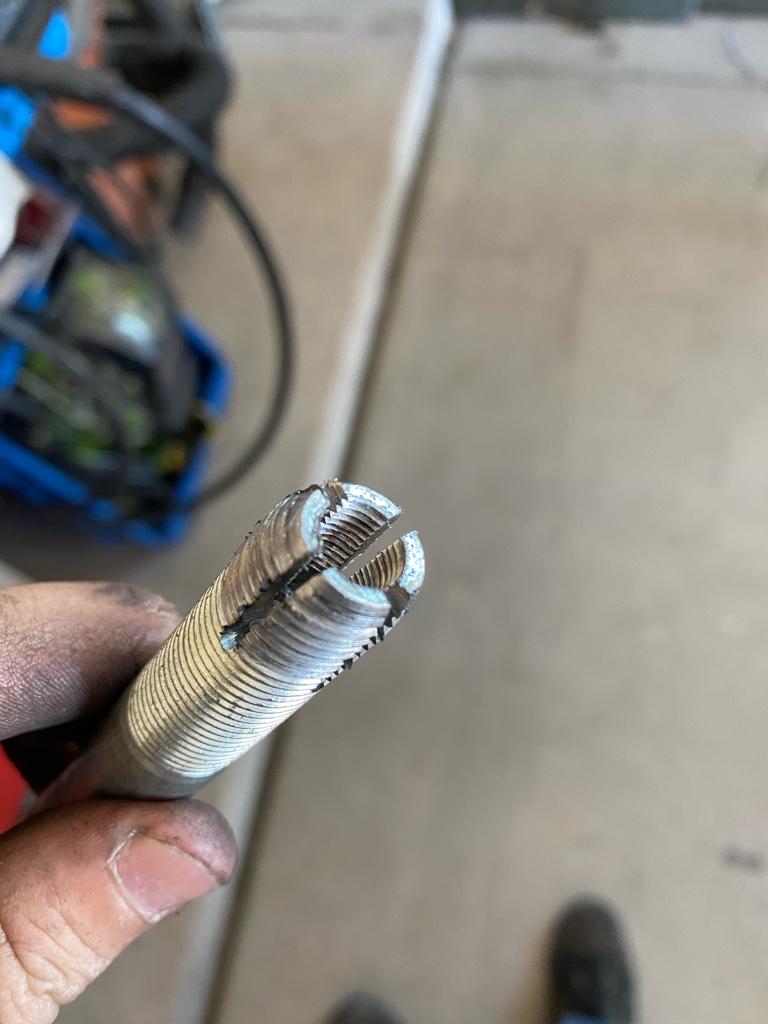 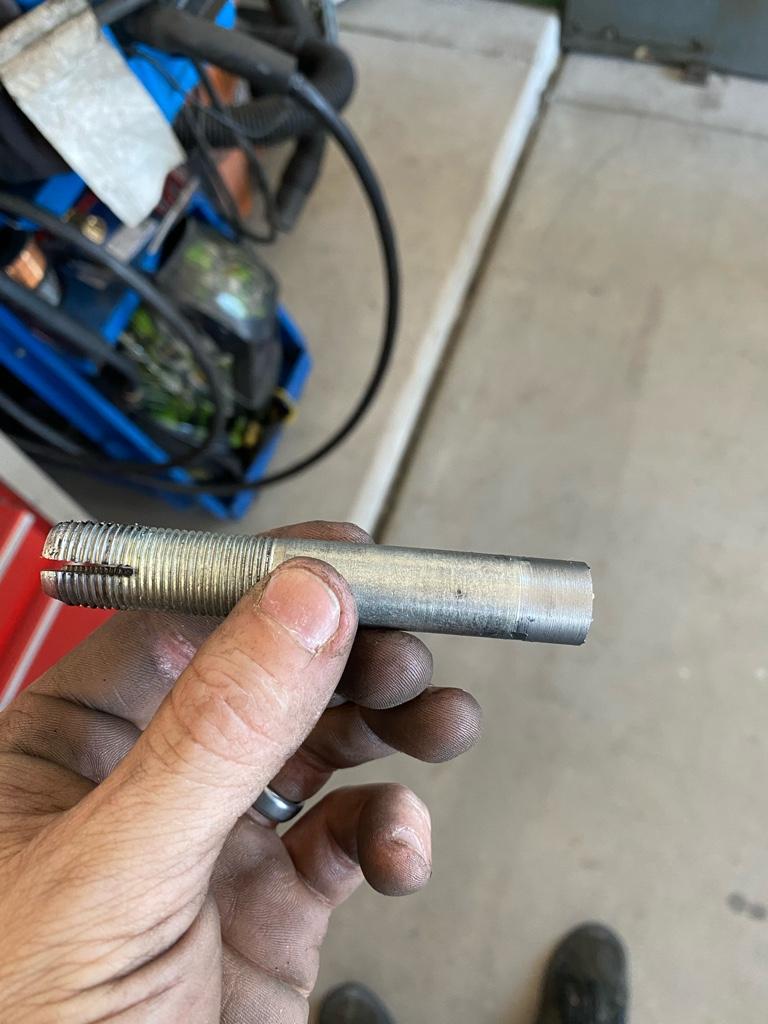 Ive now wasted about 2 hours on this shit and had enough. Dawned on me to just take an old bolt, cut the head down to .002 press fit and slam the fucker in the bushing sleeve. Dmax flexplate bolt to the rescue. cut it down, pounded it in, threw it in the lathe and fucking knocked that bitch down in about 20 min. 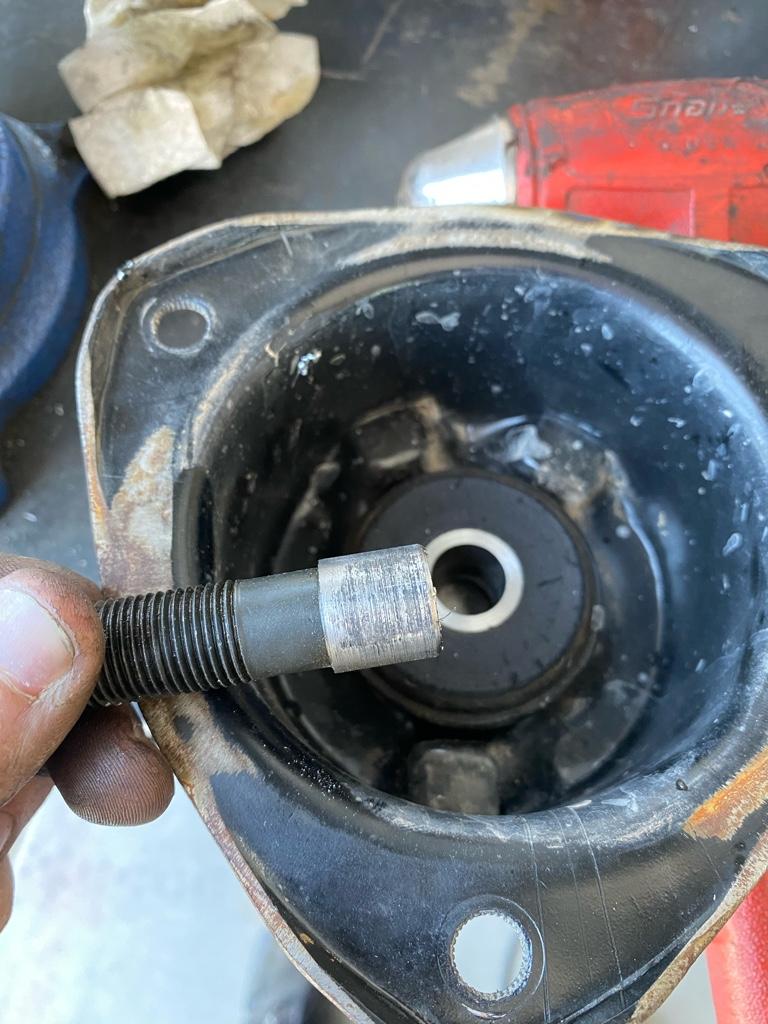 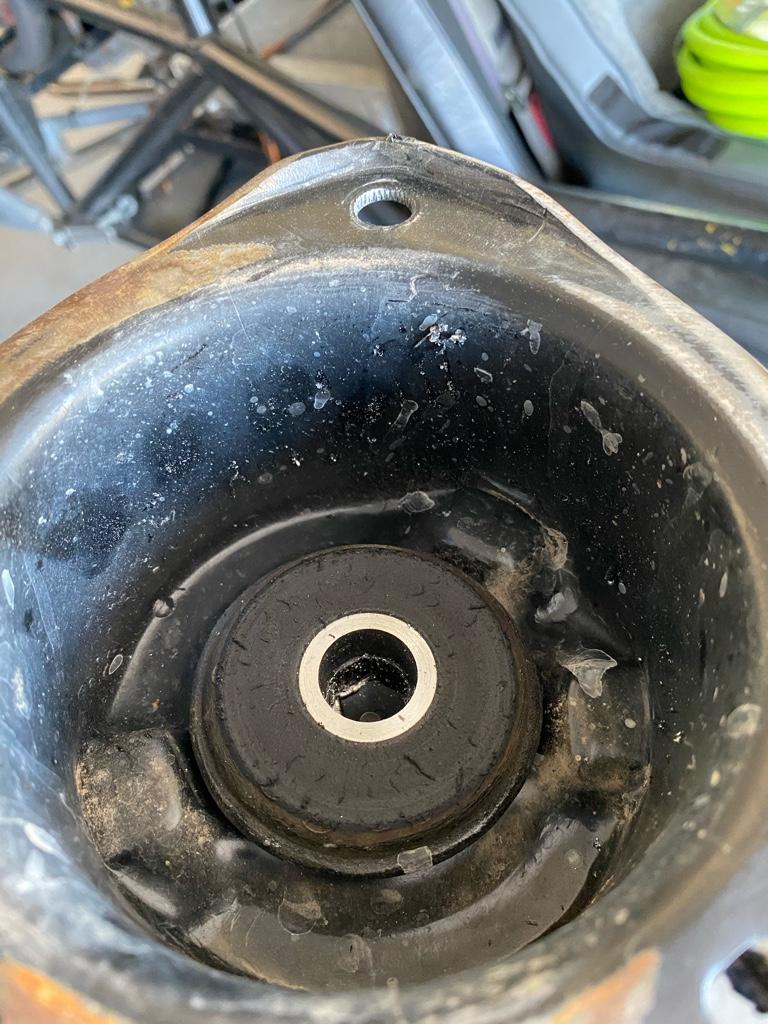 Threw it back on, lowered suspension down and the fucker was still binding some. wtf. i then realized that the weight of the suspension is pulling the rubber bushing down too which wasnt accounted for with measuring the shock shaft length. god damn it... threw some 3/8" spacers under the strut mount and its titties now.

So im now going to make my own strut spacers as the ones im currently using are too short and ill raise both sides up 3/8" of an inch. one side will be 1/4" different but i really dont give a shit lol. its going to work juuuuust fine. 6.5" OD 1" thick 6" long 6061 on its way for me to chuck in the lathe and get it all setup right.
Reactions: JakeFab
You must log in or register to reply here.
Share:
Facebook Twitter Reddit Pinterest Tumblr WhatsApp Email Link