Now stop fucking around with the hair dryer and get on the front suspension.

Now stop fucking around with the hair dryer and get on the front suspension.
Click to expand...

You got an Ameribrade pallet of badassery! Bitchin’!
Reactions: Horunner

You got an Ameribrade pallet of badassery! Bitchin’!
Click to expand...

You know I appreciate the help, nigro! Still waiting on one package from FedEx. Hopefully those dumbasses didn’t loose it
Reactions: Turboyota

Seems like FedEx has been losing more and more shit lately. Happens to lots of people. My stuff everything arrived from ameribrade at once EXCEPT 1 box which showed up the next day luckily.
Reactions: Turboyota

Thursday I threw the belt sander together 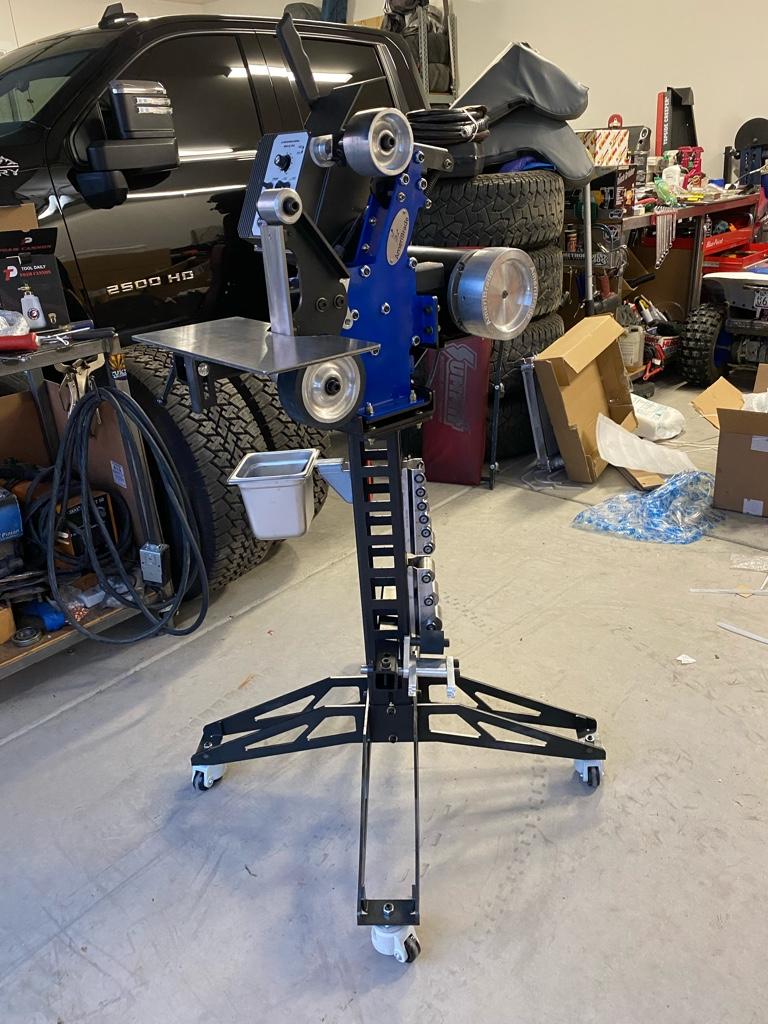 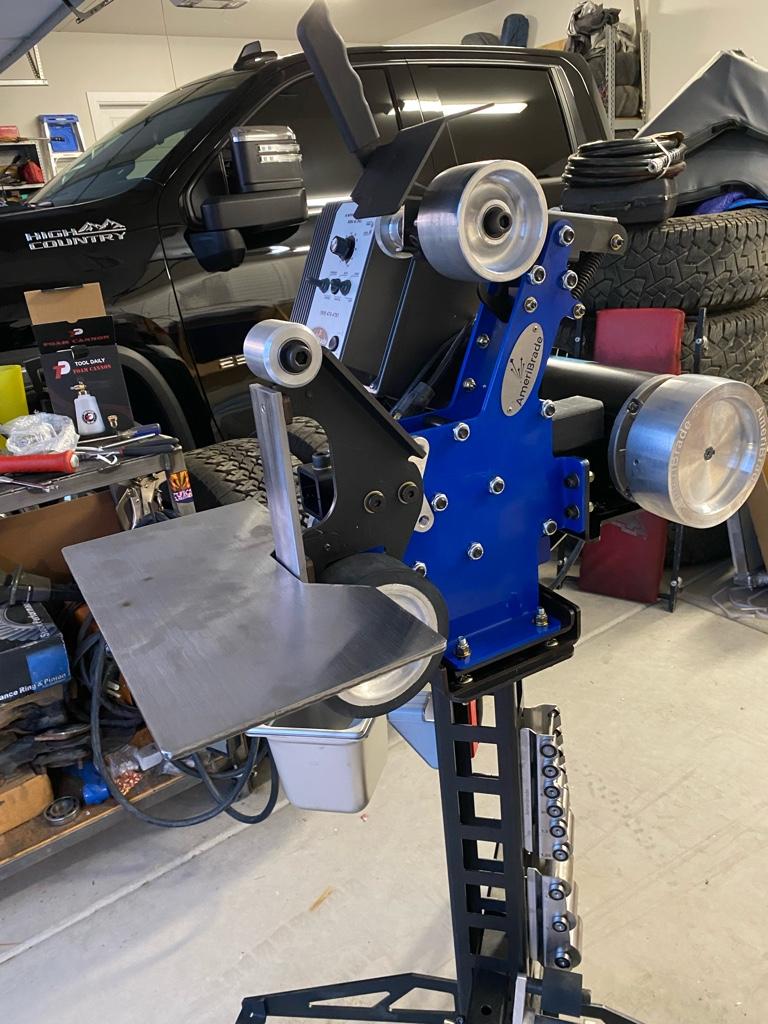 Belts showed up Friday so I threw it on as well.

Saturday was rad install day. Had a whole list of other shit to do but this took far too long. Not to mention a bday party we had to attend but they had a pool and beer, I wasn’t bitching 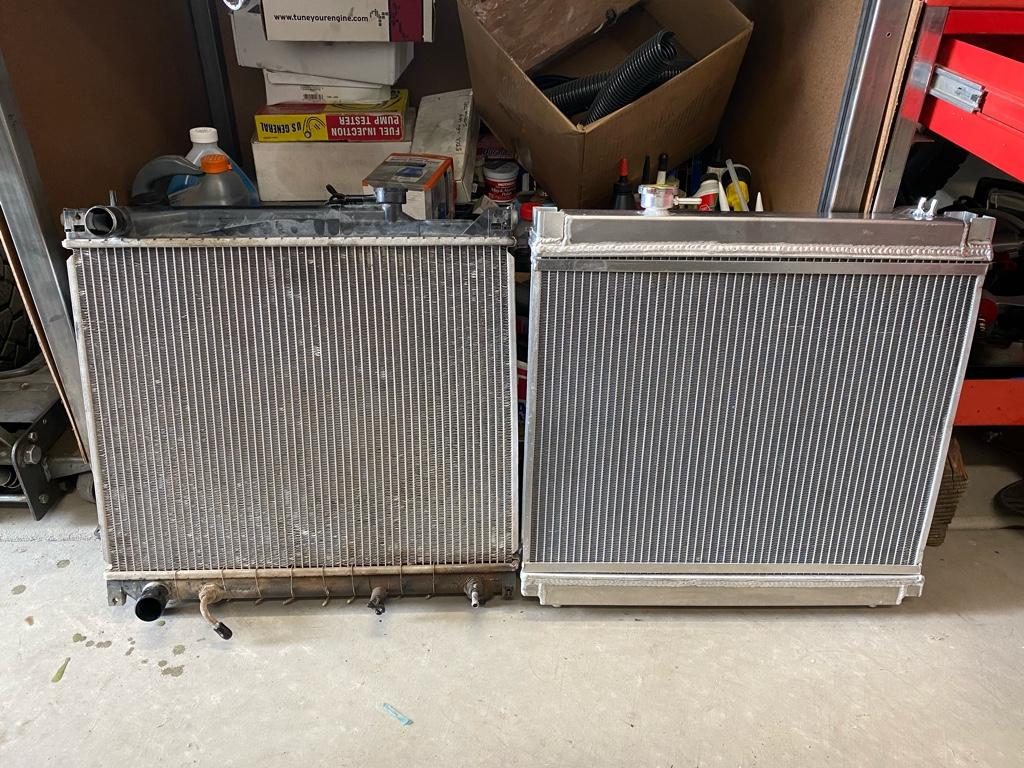 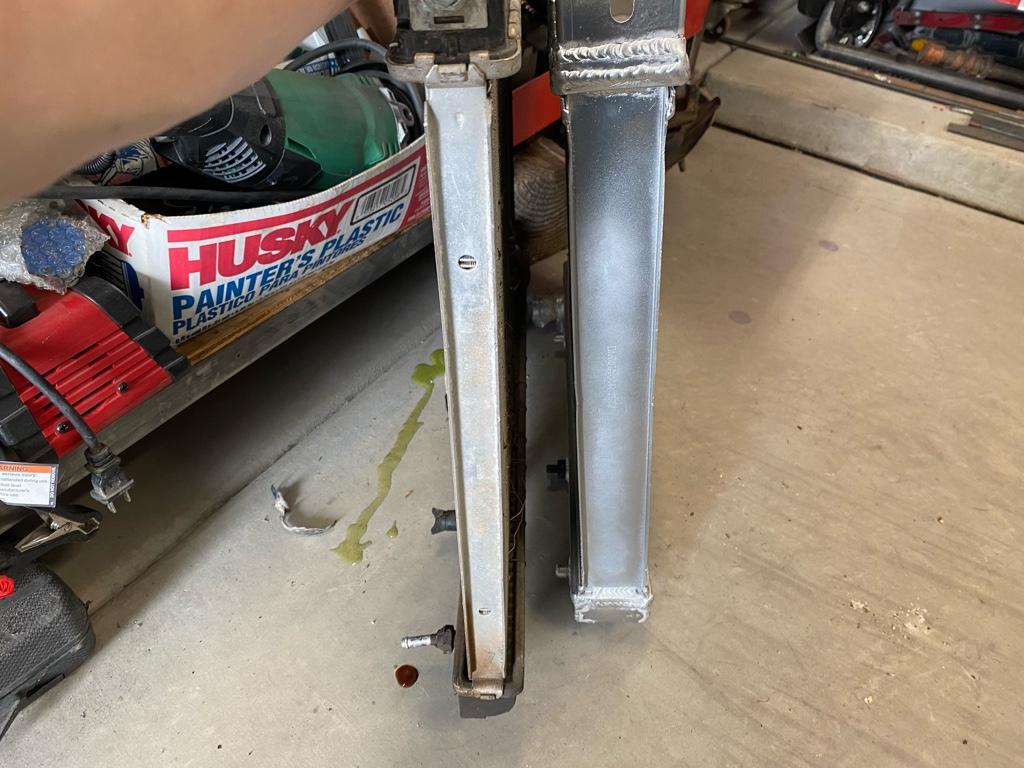 Had to flip the fan to the back side of the fan clutch. That in turn moved it too far back so I machined the clutch .150 to give the fan clearance to the water neck. Then trimmed the condenser fan mounting bolts and added some thick foam to protect the rad. Literally no room to move shit forward without pushing things through the grill. 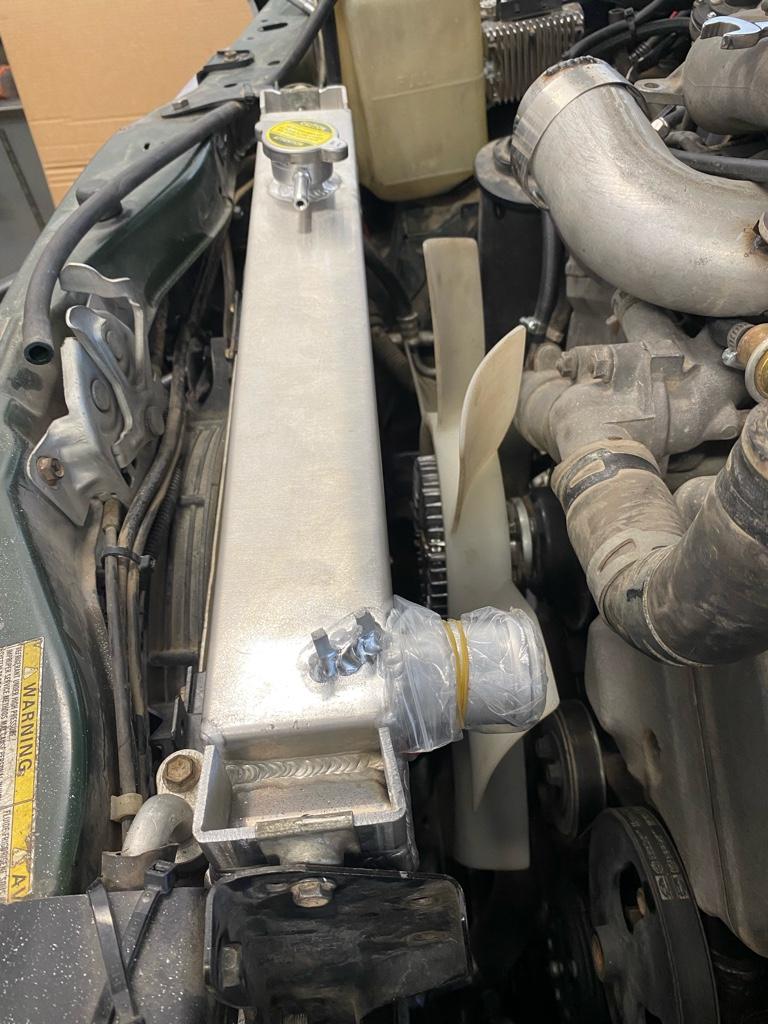 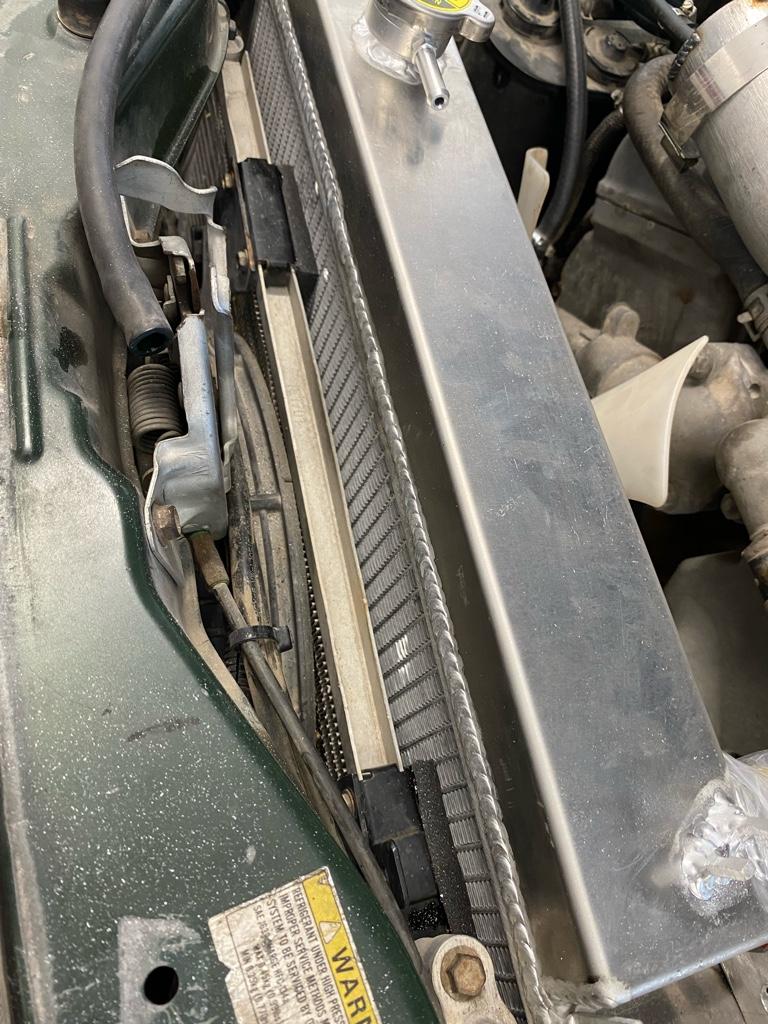 Finished it up today. I had hacked my shroud up years back to fit it (bought an xl7 shroud unknowingly) so I epoxyed the shit out of the holes to seal it up and used more of that foam to seal it to the rad. Zip ties in multiple areas to keep it against the rad (ain’t got shit for mounts on the shroud). Fan isn’t back far enough (should be outside the shroud some) but I’m out of room so fuck it, let’s see what it does 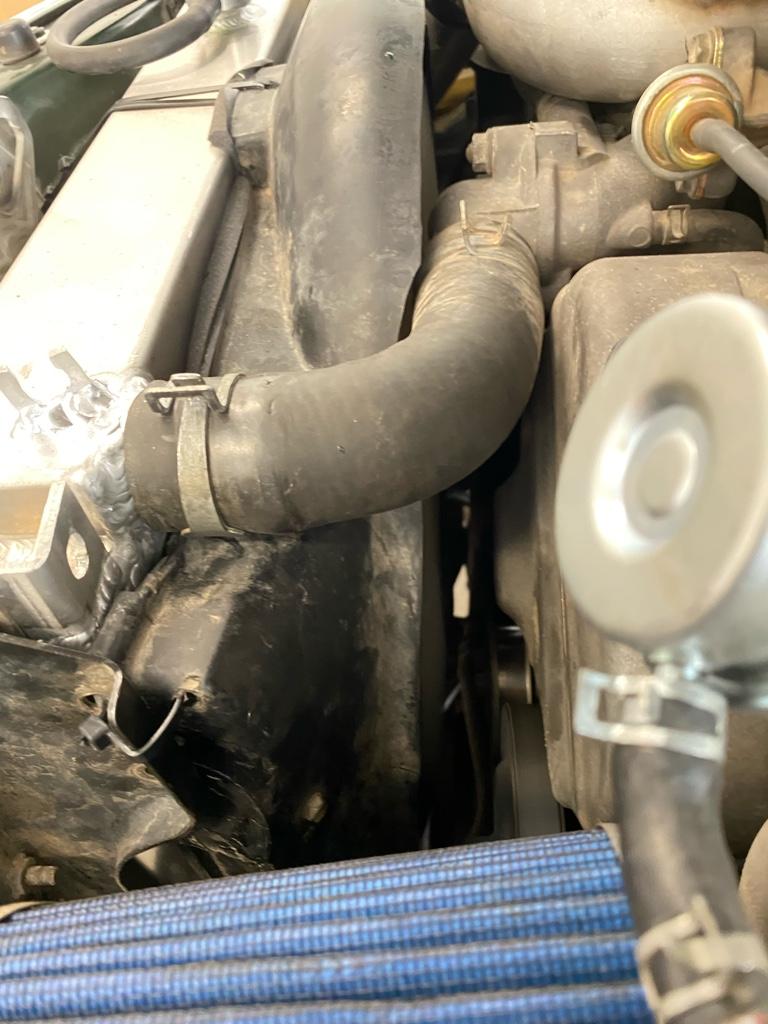 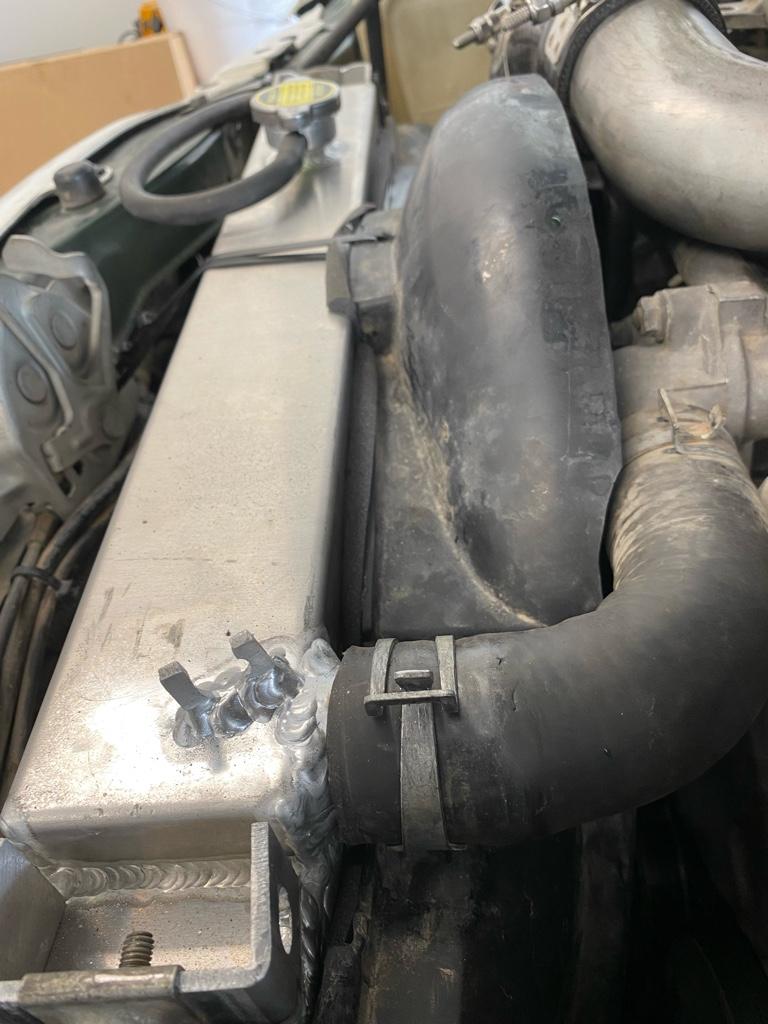 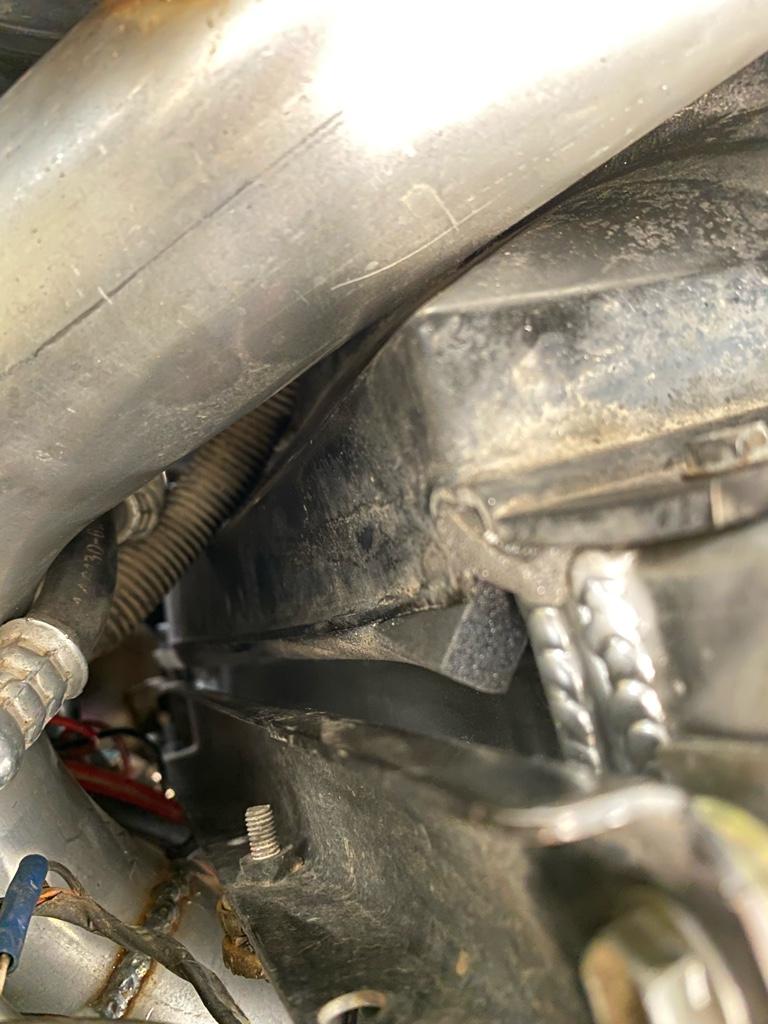 Drove the piss out of the cock sucker to get lunch with a/c on full blast and she should not get over 201*. Hell yes! Under full boost and lugging it in 4th gear in the highway it still wouldn’t get hot. Soooo much better. Bitch would hit 225-230 easy before
Reactions: the bodj, mikey09120, 85yota and 1 other person

Lets catch this mother fucker up.

At this point, i started tuning now with the AEM FIC 6. come to find out, the internal MAP sensor died at some point and no long reads right. found a used unit on ebay for 100 bucks and gave it a shot. it was good to go! i found the stock injectors are by far large neough i dont need any assistence from the RRFPR so i just let it bypass for now. yes it would be best to atleast do a 1:1 ratio but i dont like this RRFPR so i may change to a different one down the road. i need to see what fuel pressure is doing now with the sensor on the feed side (currently on the return side before the RRFPR).

i eventually turned the boost up to 9 psi and startd tuning that. boy does she run GOOD at that boost level. Issue now is knock under WOT after 5k rpm. ive got timing pulled back 1 degree for every psi of boost and teh factory computer is also pulling timing as it sees boost so total timing is 12* at k rpm. i shouldnt hear knock. i bought some even colder plugs to try and they move the electrode closer into the base (less stick out) which will help any hot spots. when i pulled the old plugs, i did some reading of them. i could see a couple had far more knock than the rest. as i looked deeper into them, i could see the fuel line was lean so it seems i have some not so happy injectors on these cylinders which is contributing to my issue. So i ordered 6 fresh ones to pop in and then ill start testing and reading the plugs again. 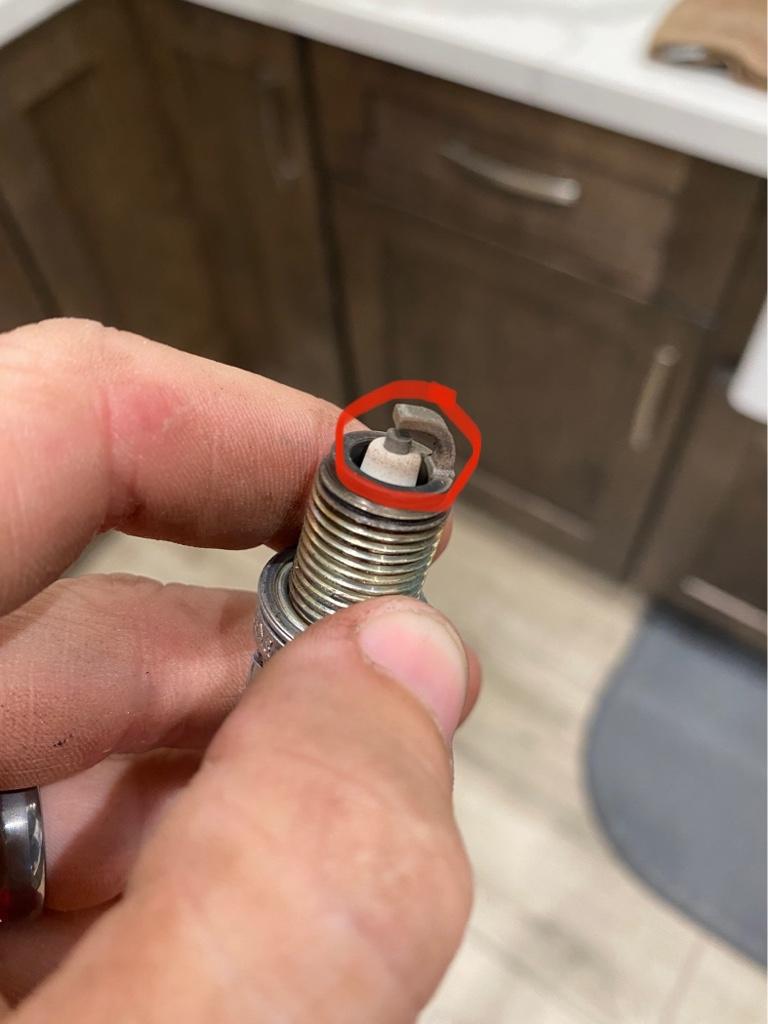 The slight blistering of the porcelain and small black flecks on the porcelain is from knock. you dont want any of that on there. i read the fueling via the base of the porcelain deep inside the plug with a ear scope we use to check the kids for ear infections. works real good but im going to cut the threads off these and get a real good look. same with the new plugs when i get the injectors in and do some runs with it.
Reactions: SByota, Turboyota, JakeFab and 3 others

update on this shit box.

tuning has been fucking pissing me off. First aem fic that i wired in years ago had the internal map sensor go dead. cool, ordered another sensor and soldered it in, no dice. so found another unit on ebay and bought it. mind you, these things have since been discontinued by aem for the last couple years. popped it in and noticed that the computer logging would drop out on me at some point as i logged, thought that was weird. it progressively got worse to the point i can no longer log with the engine running and can only flash with the engine off. put the bad map sensor unit back in and it does the same shit. ive scowered grounds, power wires, verified solder joints left and right, cleaned up grounds, fixed a shitty power wire at the alternator, checked every single resistor in the aem unit and cannot pin point the issue. i may have hurt the factory computer some how? no clue but ive noticed that 1-2 up shift under certain throttle conditions defuels like mad for a split second and it never did that before.

so in the mean time, i pulled the aem computer, put the raising rate fuel pressure reg in and did a reset on the stock computer. shifting didnt change.

to make the aem computer dialed in, i have to log. the guessing game has gone about as far as i can go so i either trash the whole idea of the piggyback and put a stand alone in which poses its own issues, just run the rrfpr, or find a aem piggybakc and hope it works

full control over fuel, timing, boost, etc with no worries of a stock computer trying to take over. this would be the best route to go but price is steep at $650 for the cheapest and still need additional sensors AND hope it works with the stock crank/cam sensor

lots of time involved to wire over, have to create a tune from scratch, setup sensors and location, stock gauges may not work and to keep the auto shifting like an "auto" and keep a/c, i have to keep the stock computer in place so that means still feeding it some signals to run the trans and a/c, then hoping that works

already wired for it, tuning is mostly done, its works on this rig

may fry the new aem if i didnt fix the issue as to why logging quits out, still not 100% sure the stock computer will play nice with it as i was finalizing tweaks with the MAF before shit went south.

ive looked at other piggyback ecu's and ive not found one i like. At this point, im leaning towards the megasquirt 3 and seeing if i can make it work with the stock computer. really wish i could just tune the stock computer!
Reactions: Turboyota and SByota

But in other news, this thing has a bouncy wastegate. Based on what I can find, it’s due to the shitastic chinese wastegate port on the exhaust housing so I did some porting on it. 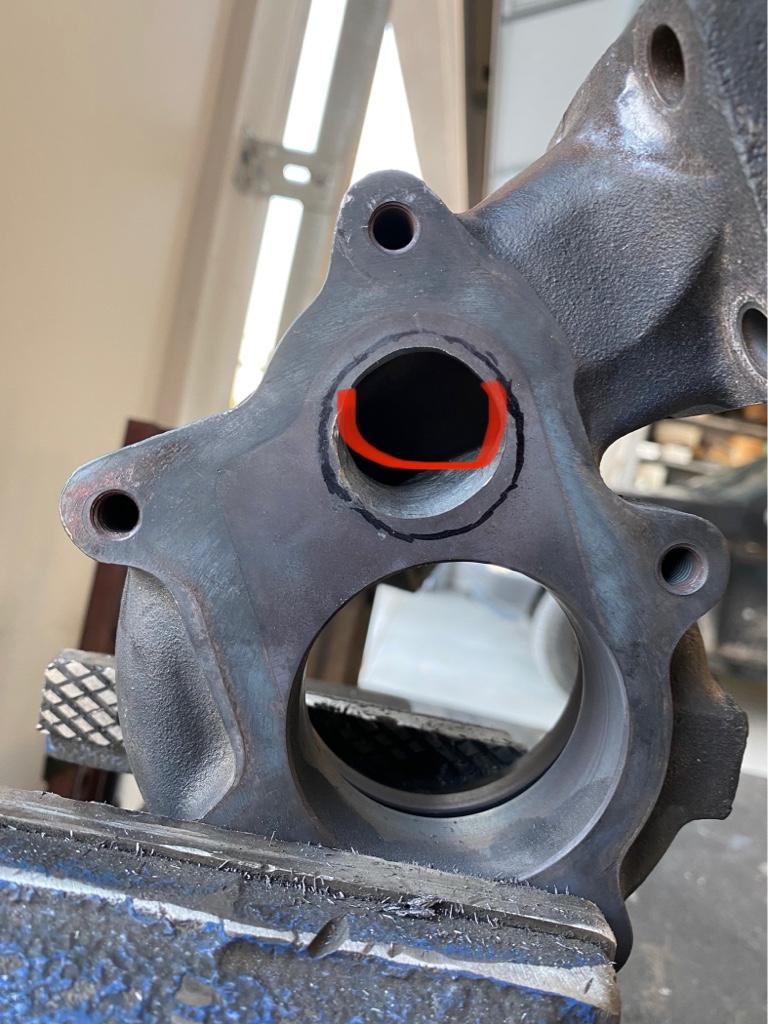 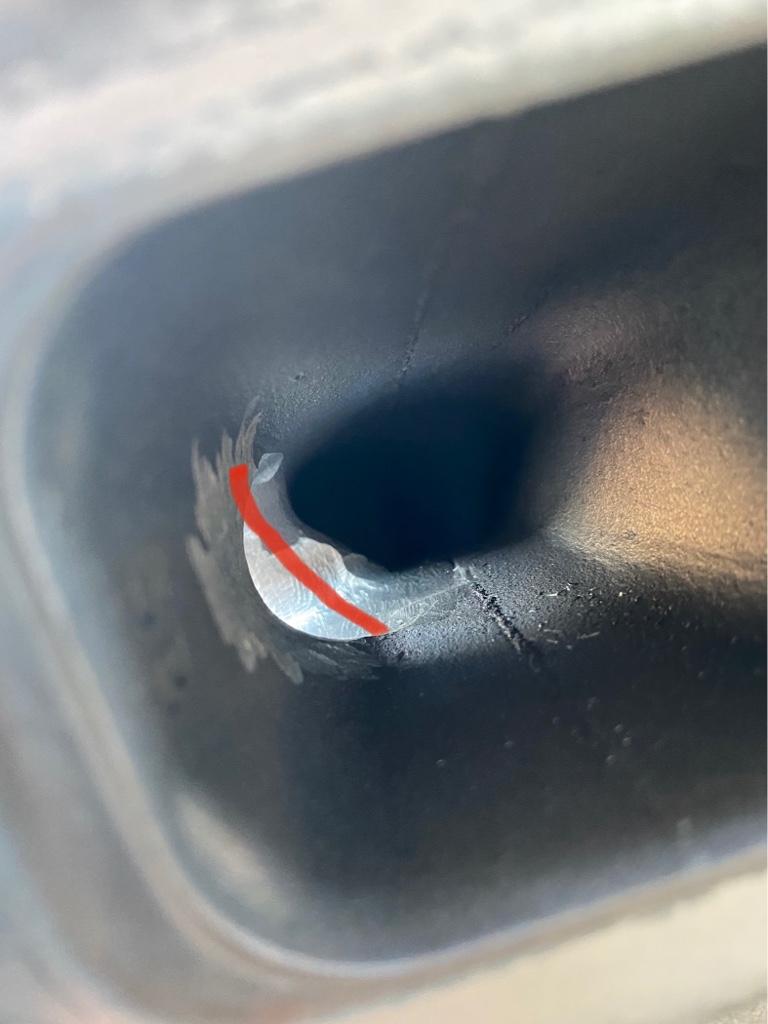 Red line/circle is where the casting material originally was. Black line on top pic is where the wastegate flap seals. That’s much larger now. The second pic I created a “trough” to funnel exhaust gasses into the wastegate easier. If I was running high drive pressures, I wouldn’t have done that (easier for drive pressure to now open the flap) but I’m running such low boost, it’s not an issue.

Since I had the turbo off, I changed the exhaust manifold gasket. Had some ticking from a leak so I threw new ones in. Really wasn’t leaking that bad, I think what I’m hearing is just exhaust pulses like headers give 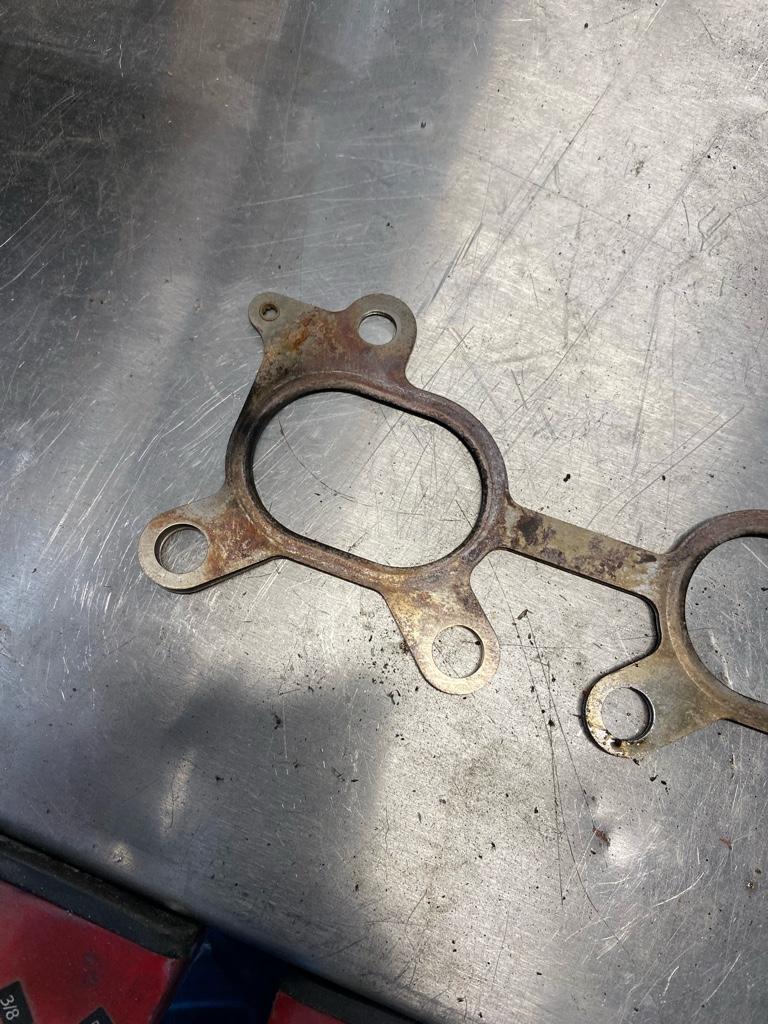 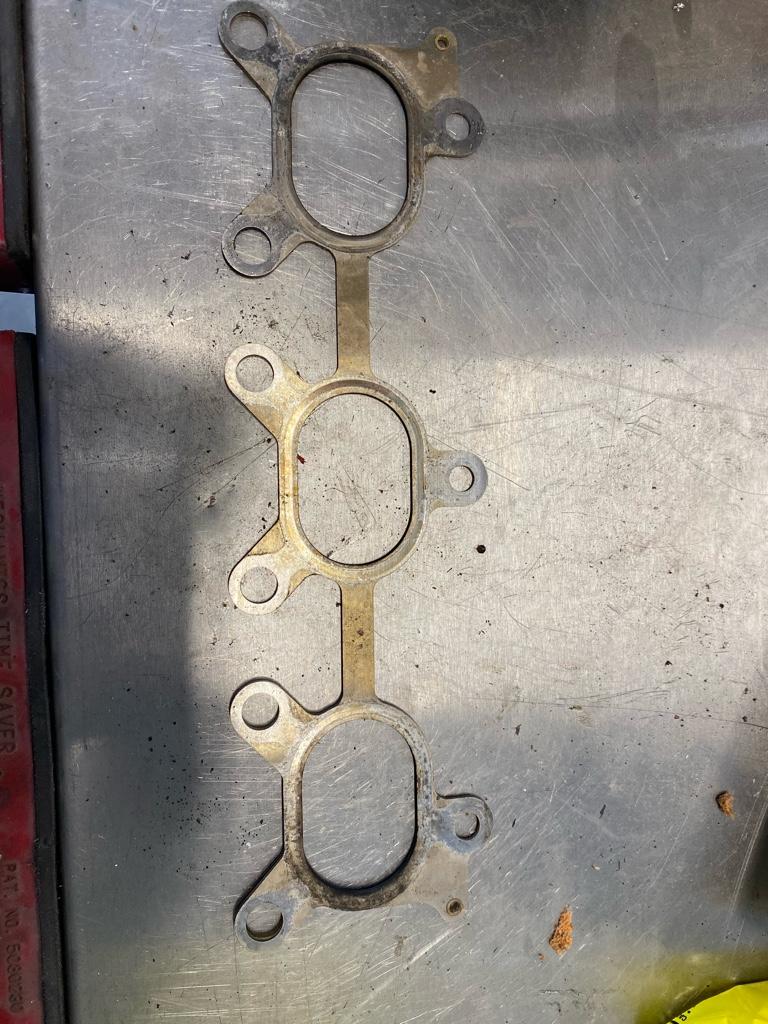 Put back together and I’ll give her a test drive tomorrow.

Been reading a lot on the mega squirt, I think I’m going to go that route. In the event this thing ever gets a ls, it’s easy enough to change it to work with that as well. Also figured out how to get around the a/c on the stock ecm and if I can’t get the stock computer to work with the mega squirt, I’ll suck up and buy a micro squirt for transmission control (assuming I don’t go full manual)