All HREW and flux core, yet less ghetto than before

After spending countless hours lurking here on DR, I figured I owed it to the site to document my build, professional or not.

This Ranger started with a ghetto DIY mid travel kit, Camburg uprights, re-arched custom 64" junkyard leaf spring pack, King smoothies, and a donor 5.0+4r70w from an Explorer. Lots of labor and minimal money invested, yet a ton of fun. An excellent learning experience, but the bump steer with the DIY kit was fucking terrible (I was unwilling to modify the Camburg 5.5 kit spindles), and the Chevy-based leaf pack was always going to be stiff as hell.

Most of the local steel places assume you're talking about pipe when you say "tubing", and even the better ones can't/won't order in DOM. Since options are limited, I picked up 220' of a mix of 1.75" .120 and .095 HREW tubing in the redneck tubing transporter.

Stripped the truck down to a bare cab, frame, engine, and trans. I cut out the fender wells for ease of access, and the rest of the fender structure will be deleted once the engine cage is in. A factory core support is staying though. After stripping the truck, the factory coil buckets and bumpstop strike pads were removed, and the holes were filled.

All past bending was done with the glorious Harbor Freight kinker, and notching was covered with the trusty old angle grinder. Picked up a Buildpro notcher, chintzy Klutch welding/fixture table, and a Pro-Tools 105 tubing bender. Welded up a quick stand for the bender instead of paying ~$160 shipped for one. Welding is far from great, but still considered pretty damn solid out here in sister-lover country.

Huge props to @FasterNU for the PAD notes. They were obviously written for extended cab trucks from the previous generation, but a ton of info still crossed over perfectly. I hacked out the cab floors and set up the floor bars.

Then came the roof hacking and the A-pillar setup.

I was dead set on keeping both wipers fully functional, while also properly tying the engine and cab cages together. The outermost tubes that intersect the A-pillars would be no big deal, but the rest of the cowl panel is a mess of computer/wipers/wiper motor/brake booster. I eventually decided to remove the cowl panel to get a better look for tube layout.

FUCK YEAH, this showed me a way to tie the windshield A tubes into the engine cross-member, while also keeping the wipers functional. With everything still being tighter than your first girlfriend, I had to cut the corner out of the computer mount and remove one of the mounting tabs/bolts for the wiper motor plate. This got the tubes in place, but the wiper linkage was still rubbing hard on the passenger side. After some more hacking and reinforcement, the modified linkage clears with no issues. Due to the tight proximity to the hood and the computer on the passenger side, I had to make up some asymmetrical plates for bolting the crossmember to the firewall tubes. I made the fixed plates from 1/4" and tapped them for 7/16 fine bolts as a bit of an experiment. If/when the threads pull out, I can always throw a nut on the back side.

Bent up and notched the b-pillar bars. Two more that fit perfectly from FasterNU's PAD notes, even if they aren't exactly in the same place.

Today's job was hacking up the floor with the Chinese plasma cutter and setting up the seat tubes. All 1.75" still, since that's the only die set I own, not counting the HF kinkmaster. I decided to tie the front tube into the frame like the b-pillar cross bar from the PAD cage. This will get tied into the door bar structure later.

The teardown started on Friday night, and I took this week off to bang out the cab cage at the very least. After that, it's back to mostly weekend work. Up next is the dash bar, roof bars, and the rear crossbar/diagonals. I'll start with the basic FasterNU PAD cage design like this.

That's where I think I need to deviate from the PAD design and add some more frame tubes, since single cab/newer truck weirdness. The outboard floor tubes are below the top edge of the frame, and closer to dead center on the frame rail. Since I essentially nixed FasterNU's b-pillar and associated frame outriggers, I think I need to add some additional support here. I'll probably just add some horizontal tubes from the frame rail over to the floor tubes before they exit the cab sheet metal, shown here in yellow. Even these might be questionable depending on the link pivot placement.

That's about it for the past week's work. Relatively quick progress I think all thanks to the flawless PAD cage notes. I think I owe FasterNU a handy or something at this point.
Last edited: Aug 13, 2020
Reactions: charlie_brown, Turboyota, jonsangel and 3 others

PS: I have the same notcher. It freaking sucks wiener.
Reactions: themoneypit

Cannot see any of your pics or video

Sent from my HD1907 using Tapatalk

TotalPozerRaceing said:
Cannot see any of your pics or video

Sent from my HD1907 using Tapatalk
Click to expand...

Fuck yeah dude! That's a great start! Wish I had done my tubes through the firewall like that. Keep up the good work!
Reactions: themoneypit

I did the “yellow tubes” you drew on a F150 recently, but I angled them up toward the top of the frame to facilitate link clearance.
Reactions: mikey09120

Fuck yea!!!! Stoked the notes were worth something to someone in sisterloving country!!! All I could ever want is a yeeehaawww when you send it over the local mud pit at 60mph. And or pics of some of your hot sisters. LOL

And I do exactly what turdblo said. You can miter the tubes coming out cab and angle them up to the top of frame. Should leave enough clearance for links. I have to keep them close to cab too... because of potential coilover at full droop
Reactions: runit02 and themoneypit

Just a thought. Since it is a single cab you could do the B Pillar external for more interior room. Probably too late for that now though.

For the outer diagonals on the B pillar to the frame, land them on the side of the frame. The inner ones can land on the tops. Spread that load out. This will do way more than another horizontal tube.
Reactions: themoneypit

Here’s what I was yammering about earlier: 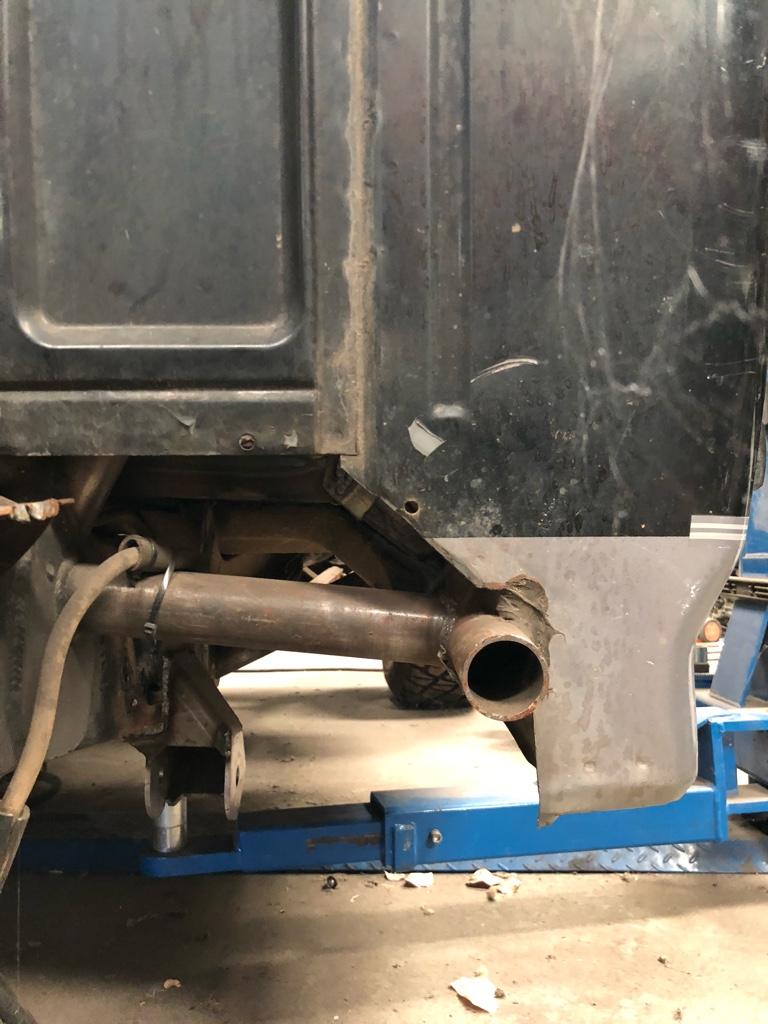 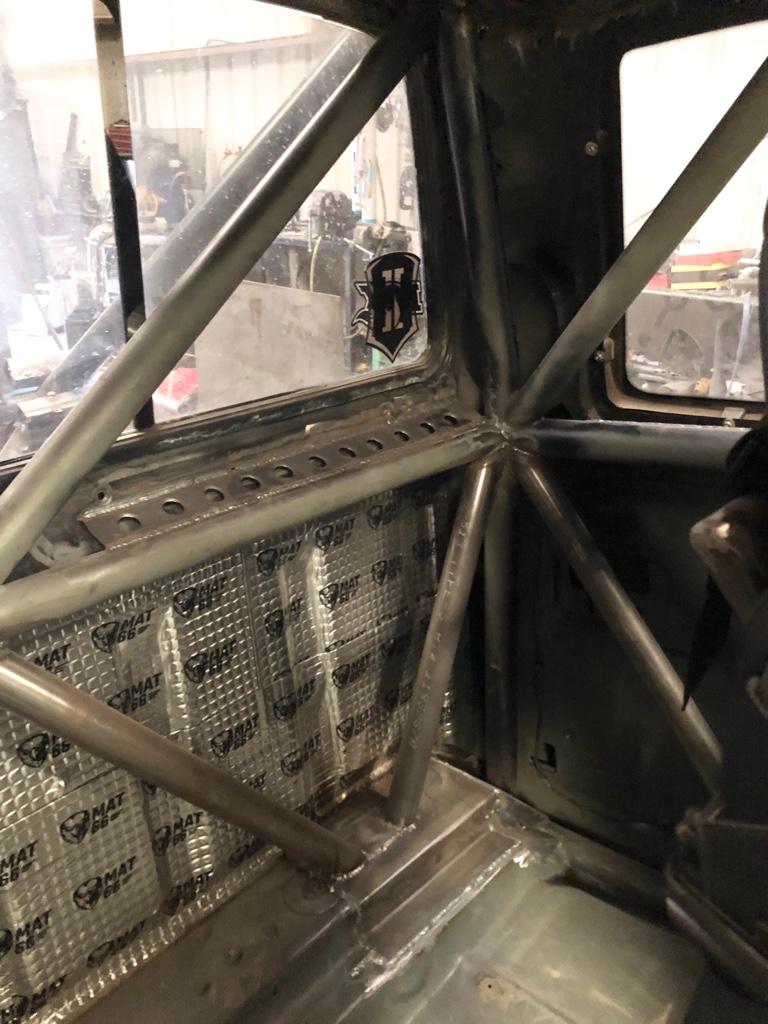