I'm going to start this thread off by saying, this is no Instagram model of a build. Yes theres going to be shitty welds and questionable fab work. im not building this to be perfect, just something that works and very budget minded. I feel that with all the social media today and all the beautiful tig welded tube chassis trucks you see on there, its easy for people to lose sight of how simple these things can be. so my idea for this is to get "back to the roots" so to say. back when we were stoked with our highschool clapped out shit boxes. so with that in mind enjoy the shitshow.


unfortunately my phone is my only camera and i had no intention of a build thread for this thing. so a lot of the early on pictures and videos got lost as my phones broke.

i bought this super ugly 2 door explorer sport for $900 that already had a sweet lift spindle and some outlaw 2's. it got ran like that for a whole desert season on what i would call the "Auto Zone Race Kit" taking advantage of their lifetime warranty and swapping out upper arms, shocks, and tie rod ends once a month from the amount of abuse it took driving from Plaster City to Borrego every other weekend. as that got old bottoming out over everything i used a set of 8" Sway Away's i had laying around in the garage. i cut my factory shock mount off and used a single tube sticking straight up with 2 tabs welded off of it to mount and a pre bent shock mount on the lower arm. that lasted for a few trips and eventually ended up cracking and i would just reweld the crack and take it back out.


Eventually i took apart a spare set of G50's i had in the shed and put those under my stock main leaf still using my stock rear shocks. that was a huge improvement from my flattened out stock leafs. drove it like that for the rest of that desert season.

then some time summer of 2019 a Camburg 6.0 popped up for sale for a whopping $420. figured the ugly bastard deserved a little upgrade and jumped on it. i let that sit in the garage for a little while
to save up some more funds.
eventually i bought some Deaver F67's from my buddy for $350, and @Turboyota hooked me up with some 18" Sway Away bypasses for $800 (the most fancy parts this thing will ever see)
It took me a while to get these on due to lack of motivation. so it sat in my driveway for a few moths.
finally got some motivation and put in the work to get it going. fab work got pretty involved in the rear since i was trying to keep my back seat, and trying to think of ways to not have the shocks smack someones head off if shit went south.

For the front end, install was pretty easy as it was all bolt in. took it out the day after install. That was another pretty decent improvement in handling. but what i didn't account for at 10:00PM when i was putting the front on, was that the Camburg spindles are much taller than my lift spindles. so after charging into devils slide whoops, the upper arm smacked the hose fitting coming out of my top cap causing it to DNF. drove back home and started planning how to fix this. got some different top caps that had a little better angle on the hose that just barely missed the upper arm. i also used this opportunity to pick up a set of Walker Evan's shocks from a RZR for $300 so i could rob their adjustable resi's.

That brings us to our most recent desert trip and our last. we went out to superstition for valentines day 2021. truck was doing amazing, handling way too good for what it is. The Camburg front end with the Sway Evan's shocks was a really nice combo. and with the Deaver F-67's out back we were hitting stuff way faster than before and not feeling much. it got to the point we realized it was way too fast and if something went wrong it could end up really bad and its time for a cage. towards the end of that trip we were going through some whoops that had a jump in the middle of some and landed back in the whoops. that ended up ripping the whole top of the frame off and that brings us up to now. its been sitting in my driveway for the past year waiting for me to finish the REV.2.5 front end.

the plan for the new front is to try and run 2-2.5 Sway Away's. packaging is super tight with the tall spindle and trying too keep my A.C. so to help prevent another top cap DNF im having my shocks converted to bottom mount resi.


I've hit another snag in the motivation department so writing this to hopefully get the juices flowing again. I'm hoping to have it pretty dialed in for Tuff Trucks in Del Mar this year. and thinking about trying to enter some sort of race in 2023 and see how it does against other trucks.


That's enough typing for now, here's a photodump ( if i can figure out how to do it)
Reactions: Horunner, themoneypit and SoupGFX

the big ugly and "bed cage"

Could probably just notch the frame a bit and angle the shocks a smidge more inboard to fix the resi interference issue. Since you have to re-work the upper mounts anyway, seems like a convenient time to do it.

themoneypit said:
Could probably just notch the frame a bit and angle the shocks a smidge more inboard to fix the resi interference issue. Since you have to re-work the upper mounts anyway, seems like a convenient time to do it.

Walker-A-Way shocks are a nice touch.
Click to expand...

That's today's update. My phone is pretty old so Tapatalk doesn't like to upload pics. So need to get them on the computer. But here's a few that will upload. You can kind of see how I did the frame. 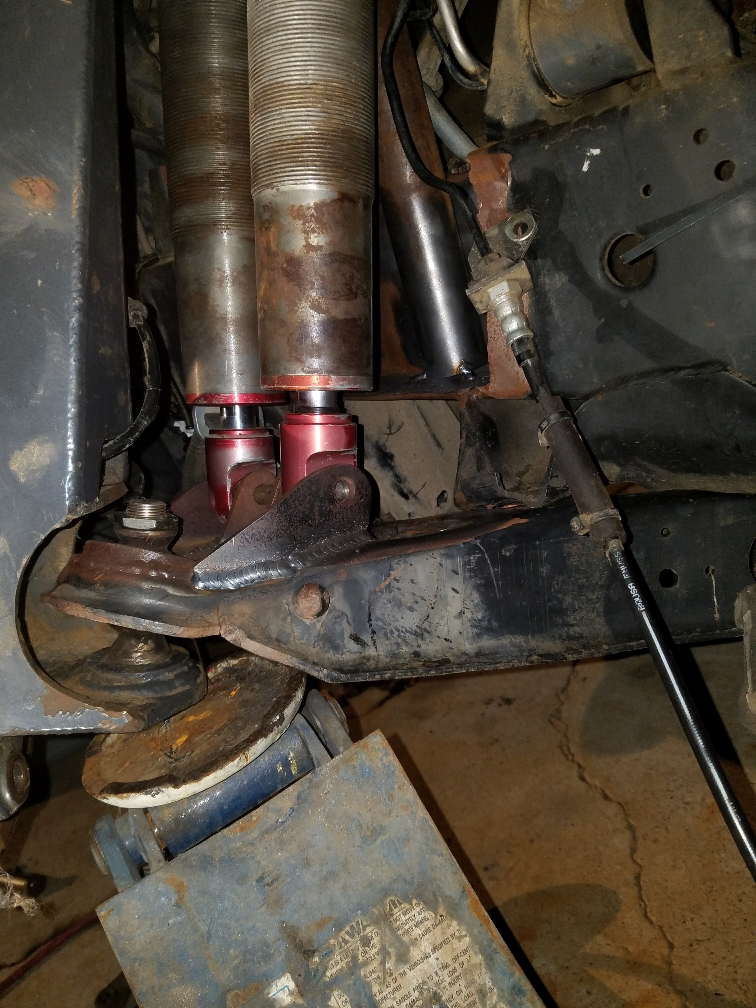 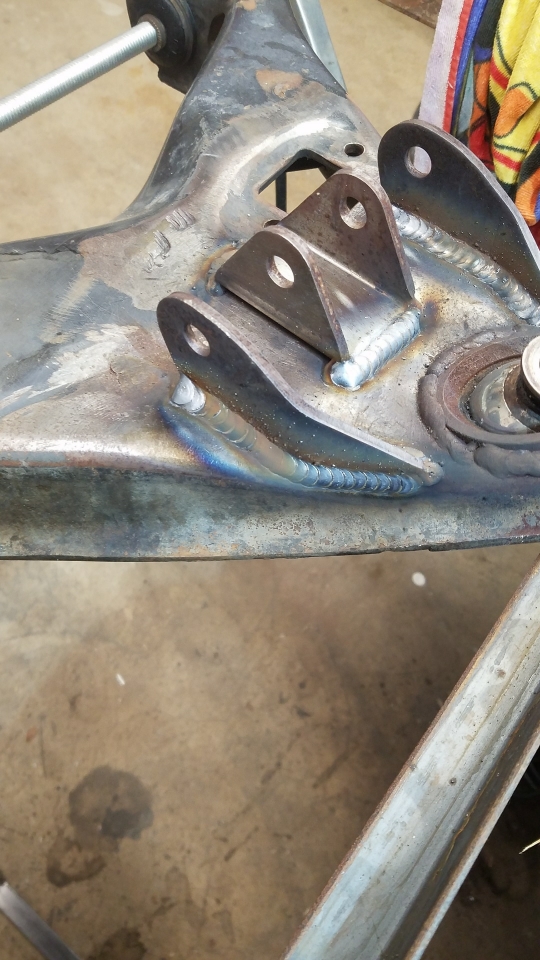 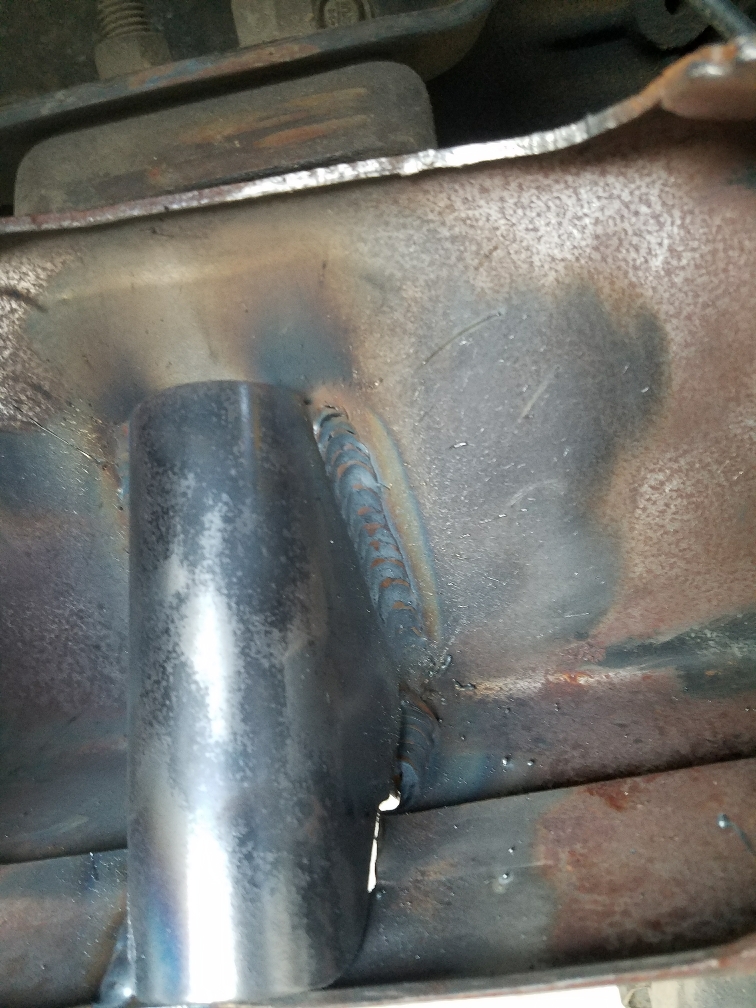 Is that some crack..?

Definitely looks like it. Not sure how I over looked that. I'll have to double check when I get home.