So I’ve had this 4runner for about 5 years. Got it in a trade for my 96 XJ. It was completely stock except for the holes one of the POs has drilled through the roof to attach a roof rack at some point and a wide band o2 sensor. No idea why they added that, but good to know if it’s running right.
First photo exchanged when talking about the trade. 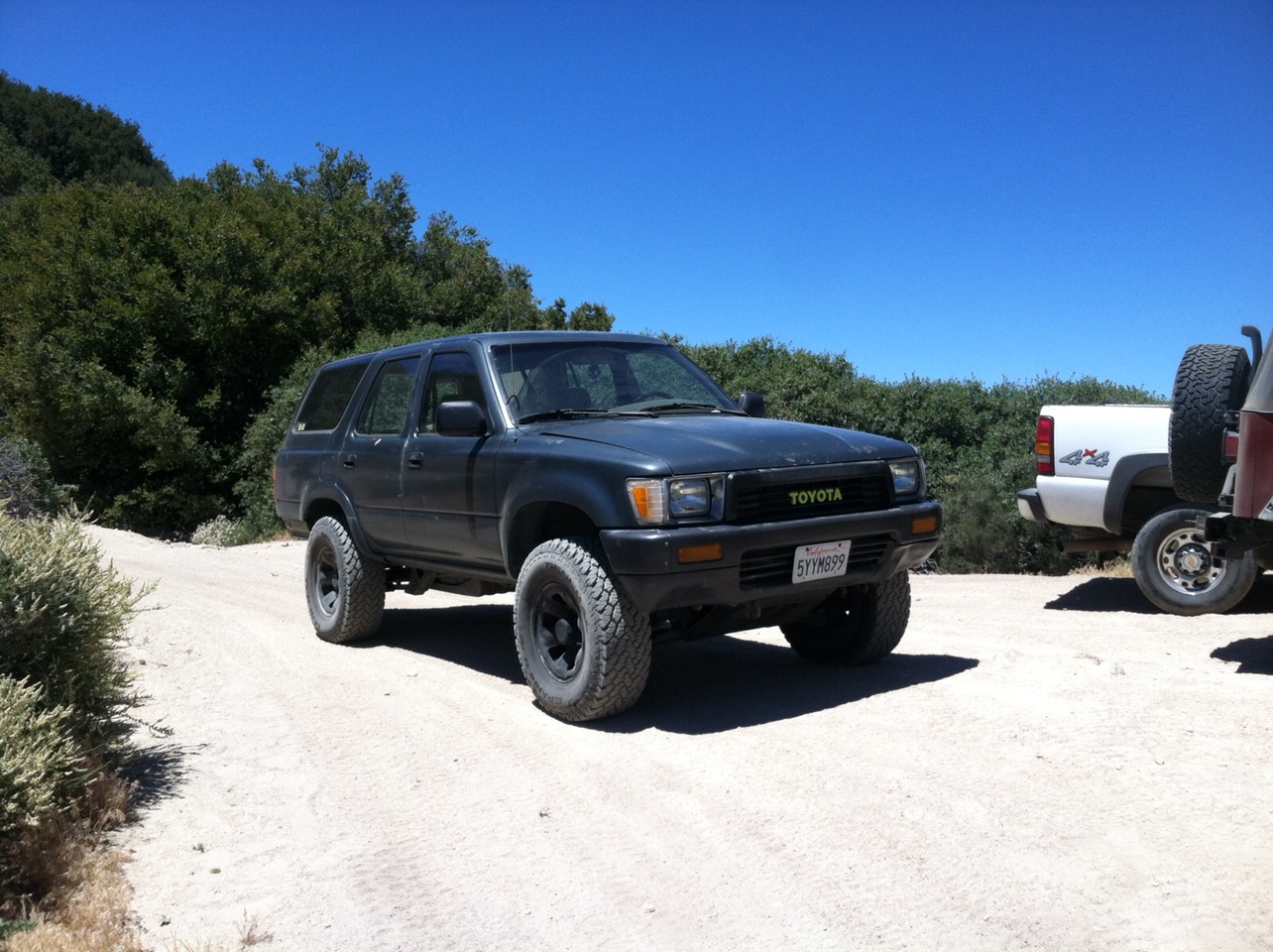 Car fax said it started its life in Oregon and made its way south each time it changed owners. Never been in an accident till I was rear ended in the Redlands, CA bakers drive through by an old lady on her cellphone. I popped out the tailgate with a friend because it looked like her insurance wasn’t going to pay me a cent, then was later paid.

I don’t have a lot of the photos of it when I first got it. Or the “fab” work done on it in the early years I had it but I’ll post what I have.

It came with some fox 2.0 emulsion shocks that I got some resis for and made upper shock mounts from F250 stock mounts. Found a thread on IH8MUD about it and seemed simple.

For the rear I made an upper adapter to mount the 2.0 fox’s I got off rdc for cheap. Quick rebuild and fresh oil and they were in. 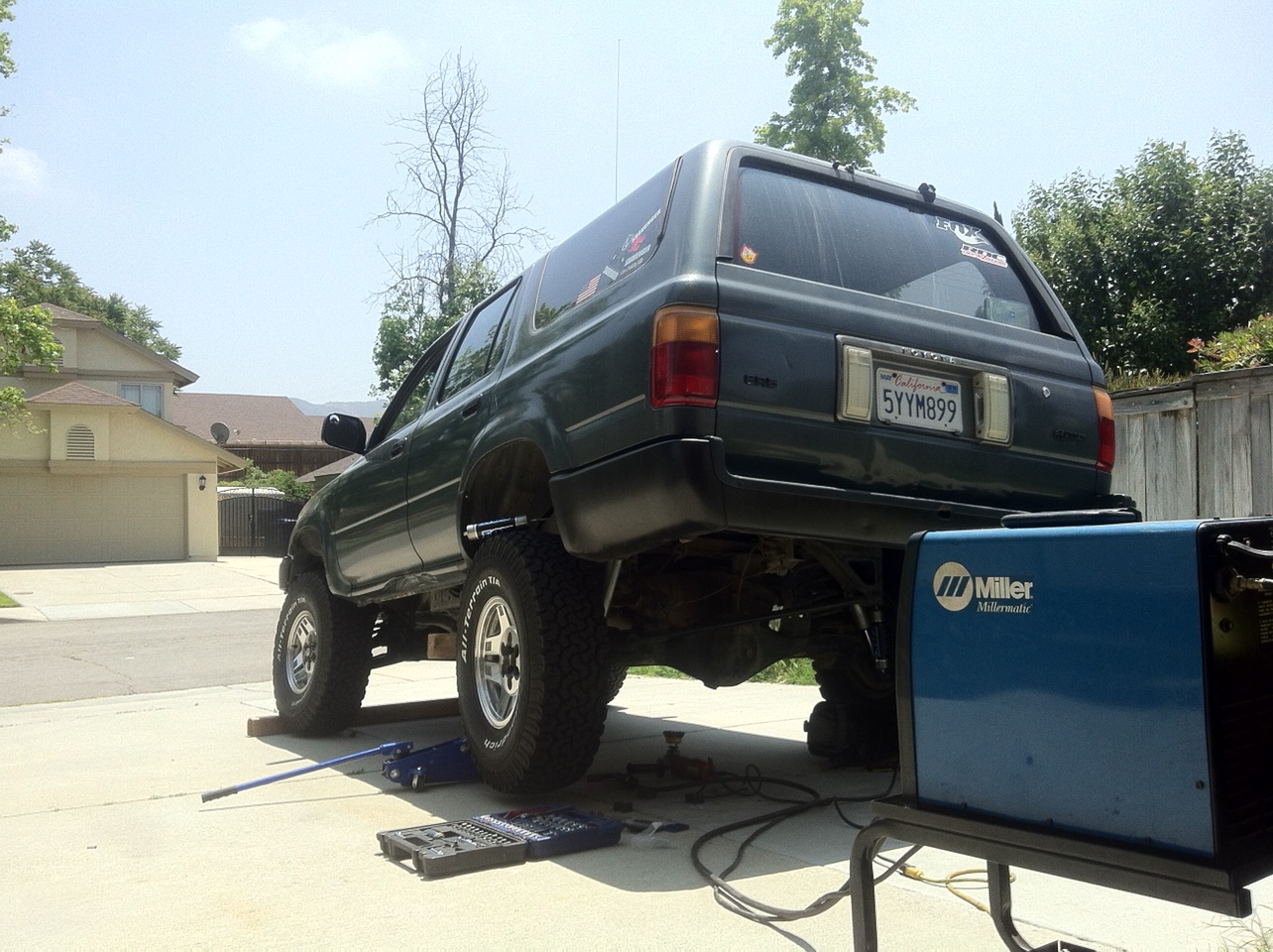 I don’t have a photo at the moment of the rear adapters but it’ll post that when I redo the rear.

After those were in I made a bolt on frame truss 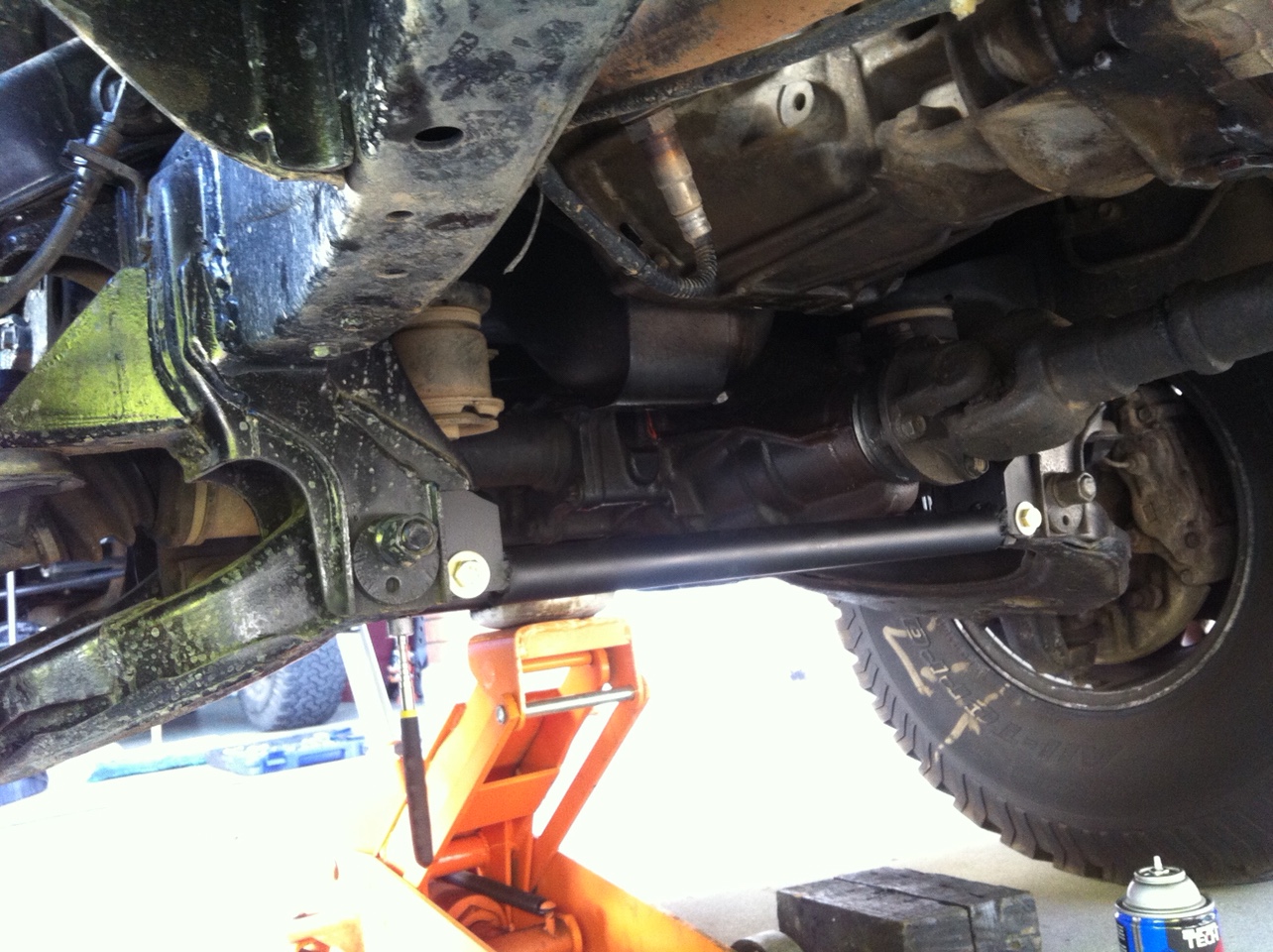 That’s how it stayed for about 3 years and a lot of dirt miles and shock re-valve sessions to get it to ride better. 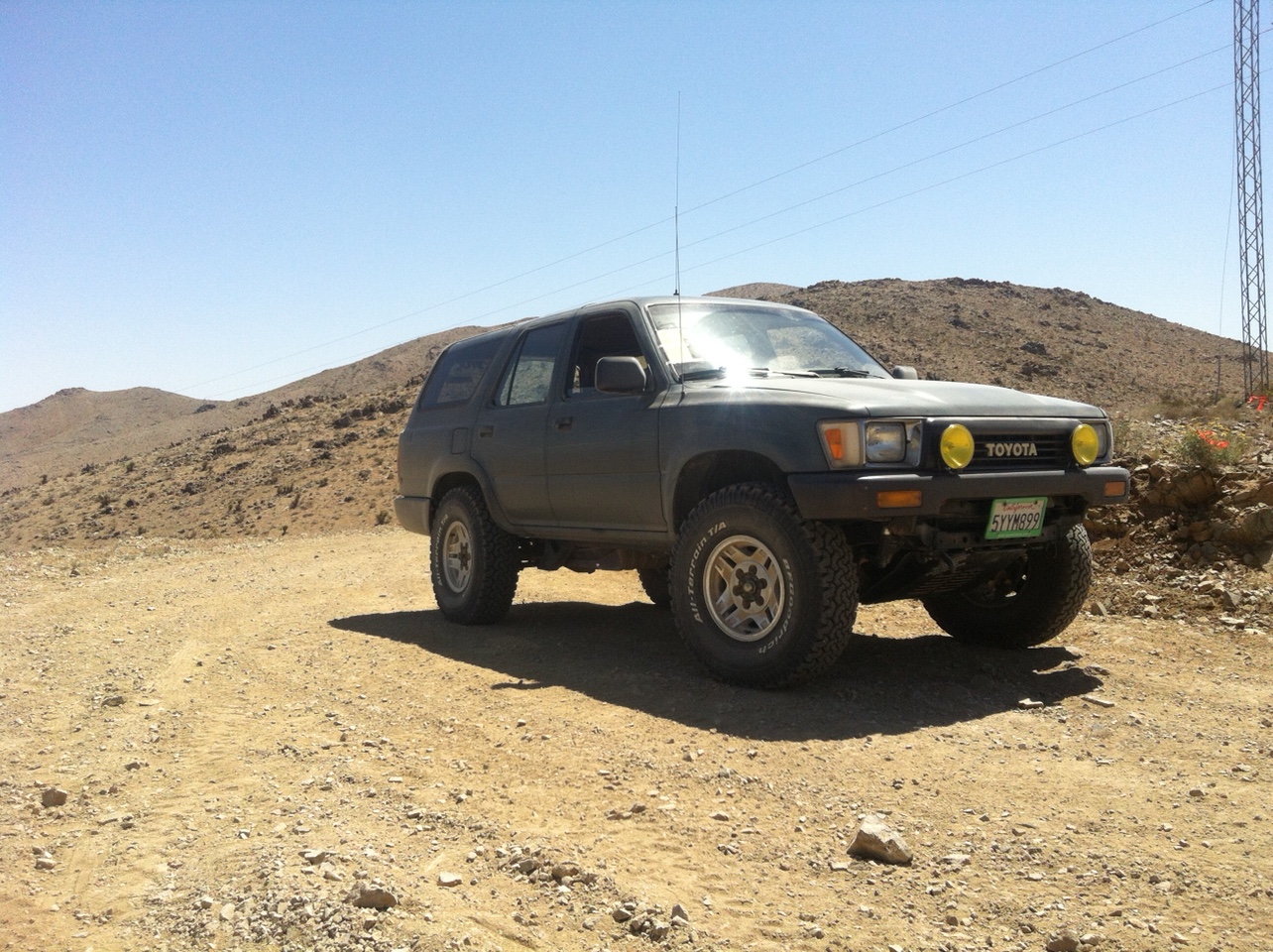 Barstow poker run with some buddies 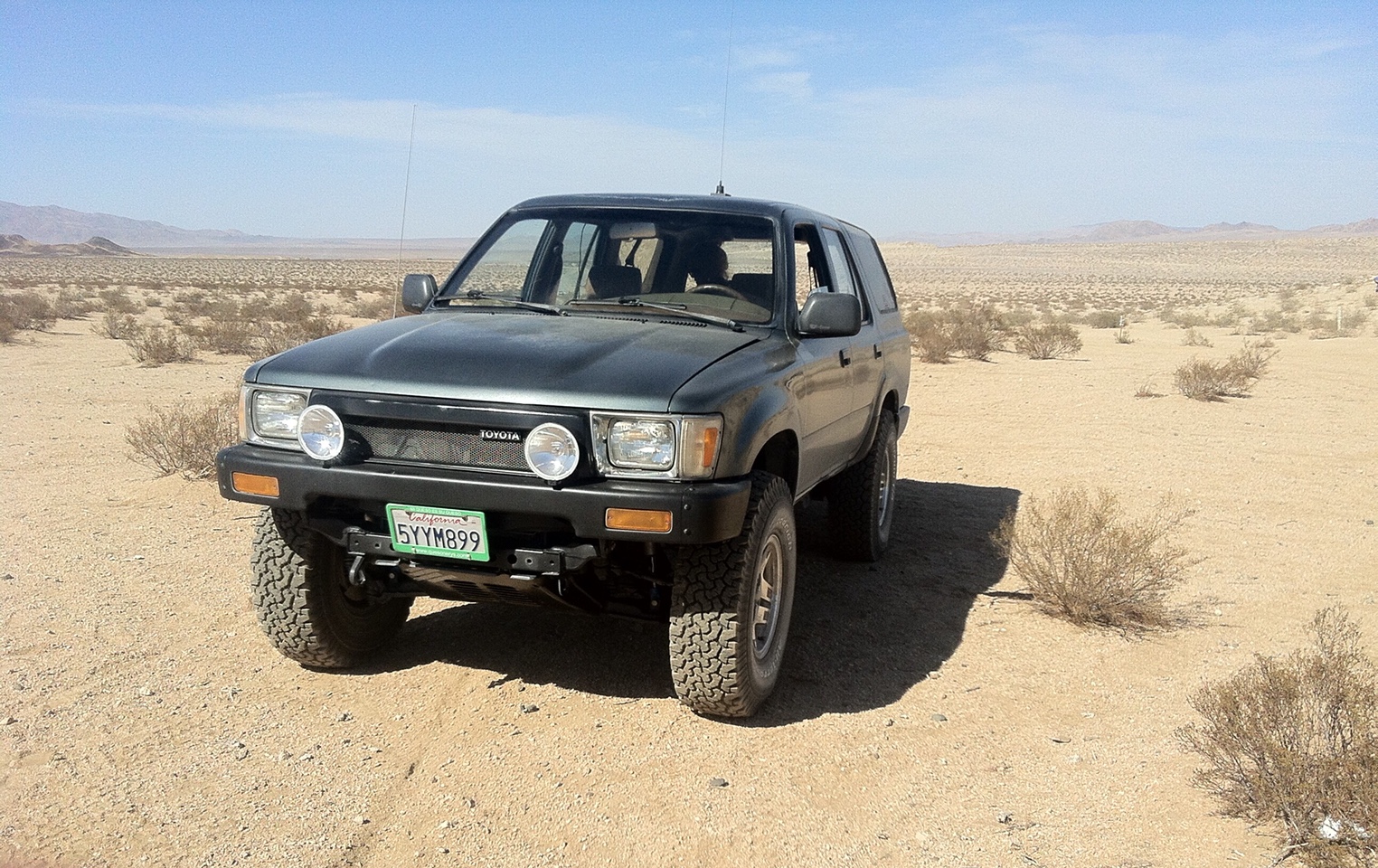 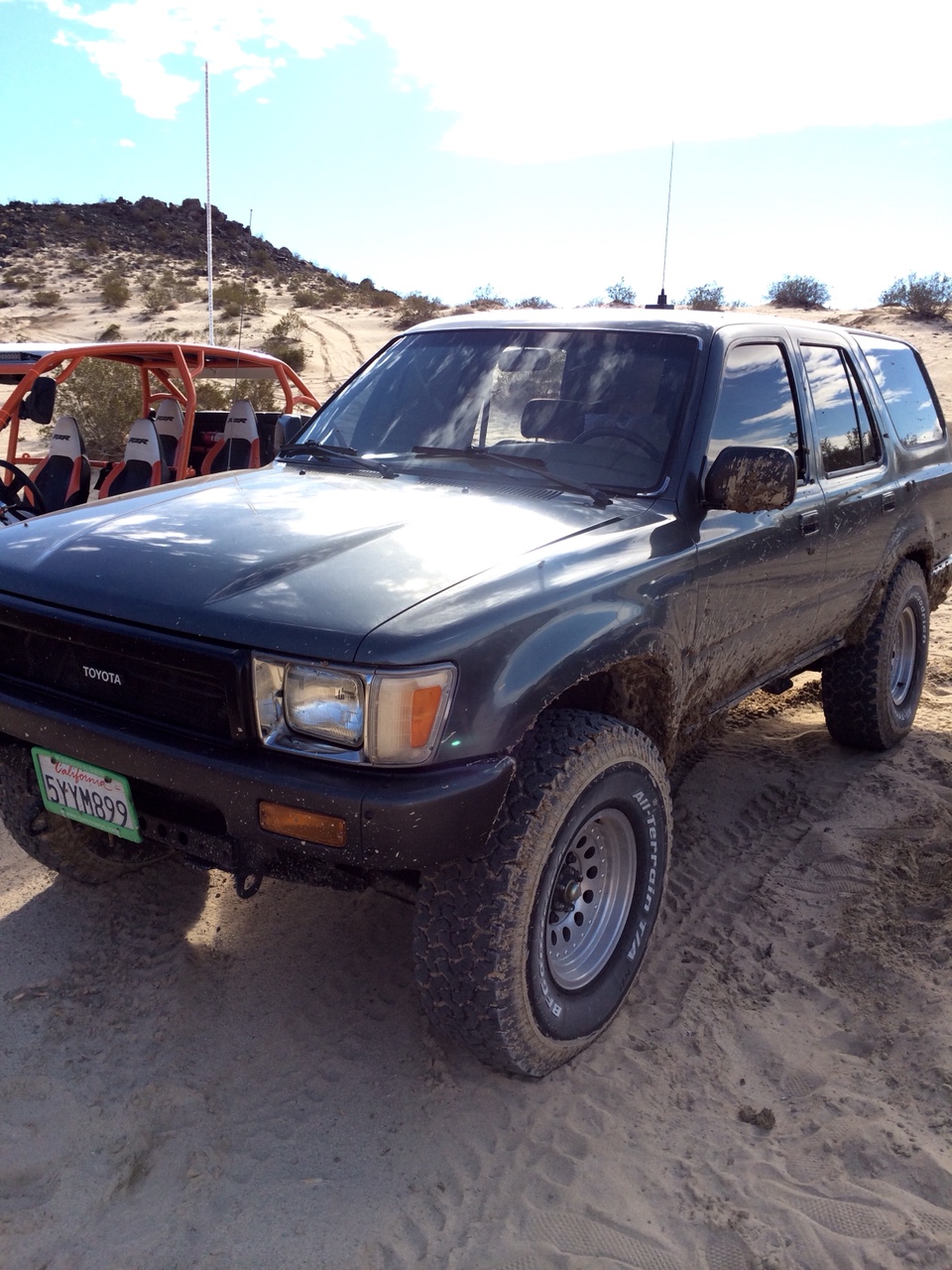 Johnson Valley. First trip with Turboyota. Met him when I was living with my dad. He was the next door neighbor. After hearing his ranger fire up one day and the Metallica blaring out of his garage, along with the “fucks” screamed and tools being spiked in the driveway, I knew I’d like the guy.

After finding a deal on some fox bumpstops I decided to put them in the front end along with some sway a way torsion bars I got from a friend. 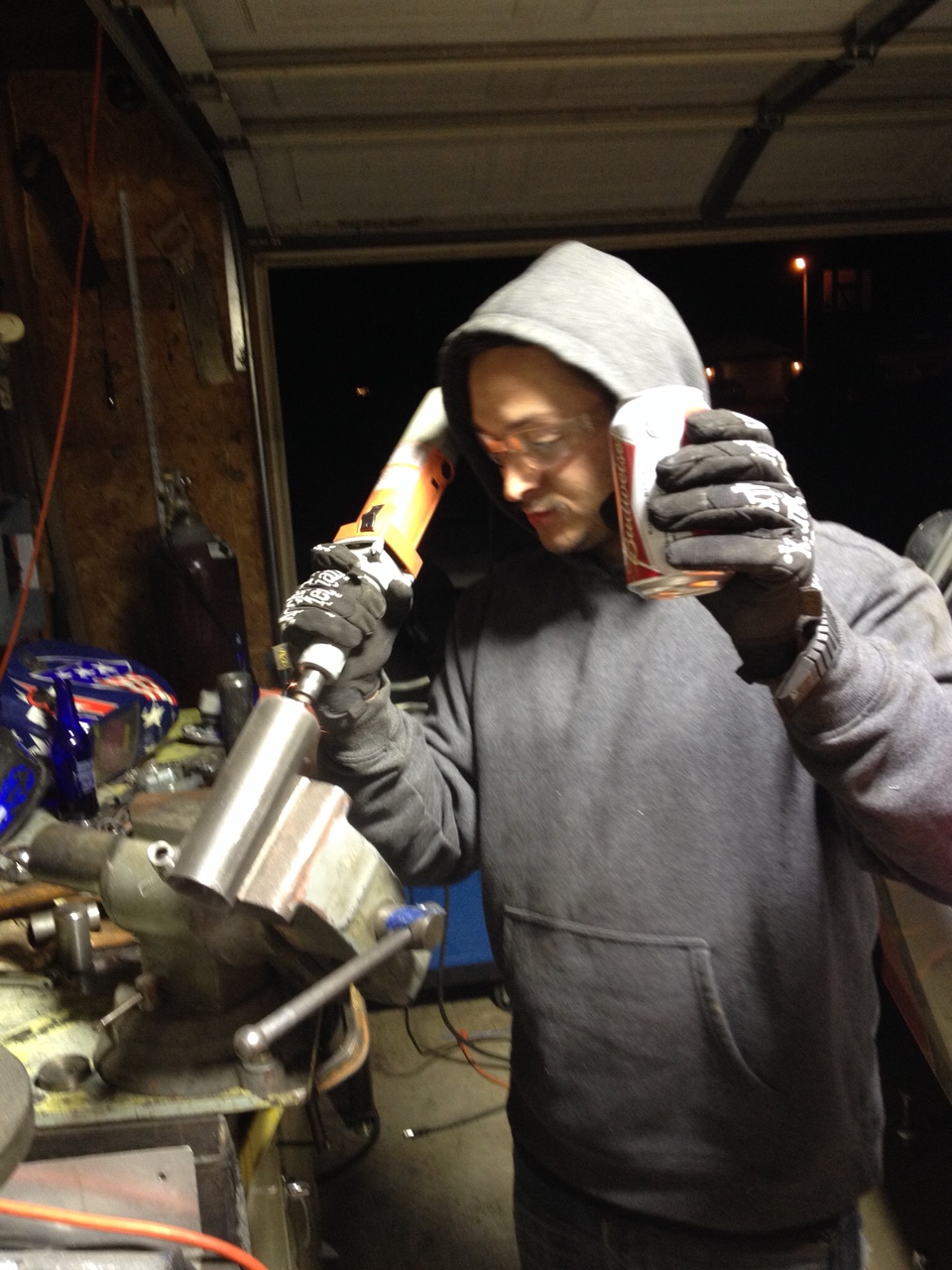 Using turboyotas dildosander to open up the bump cans after welding them. 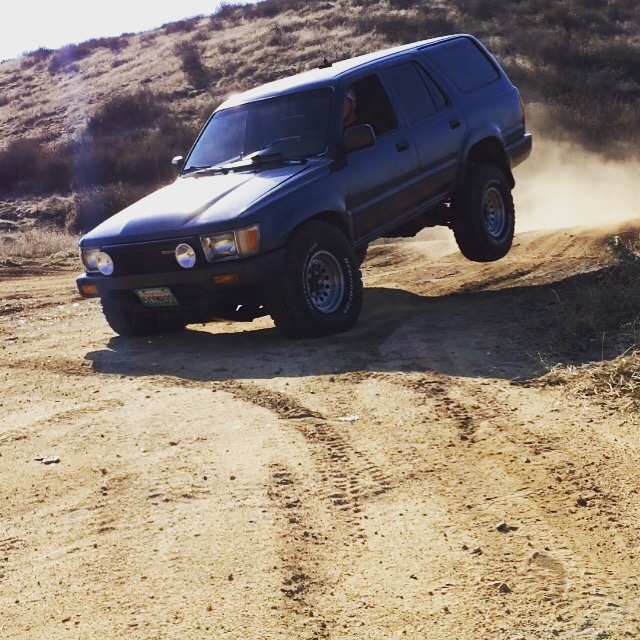 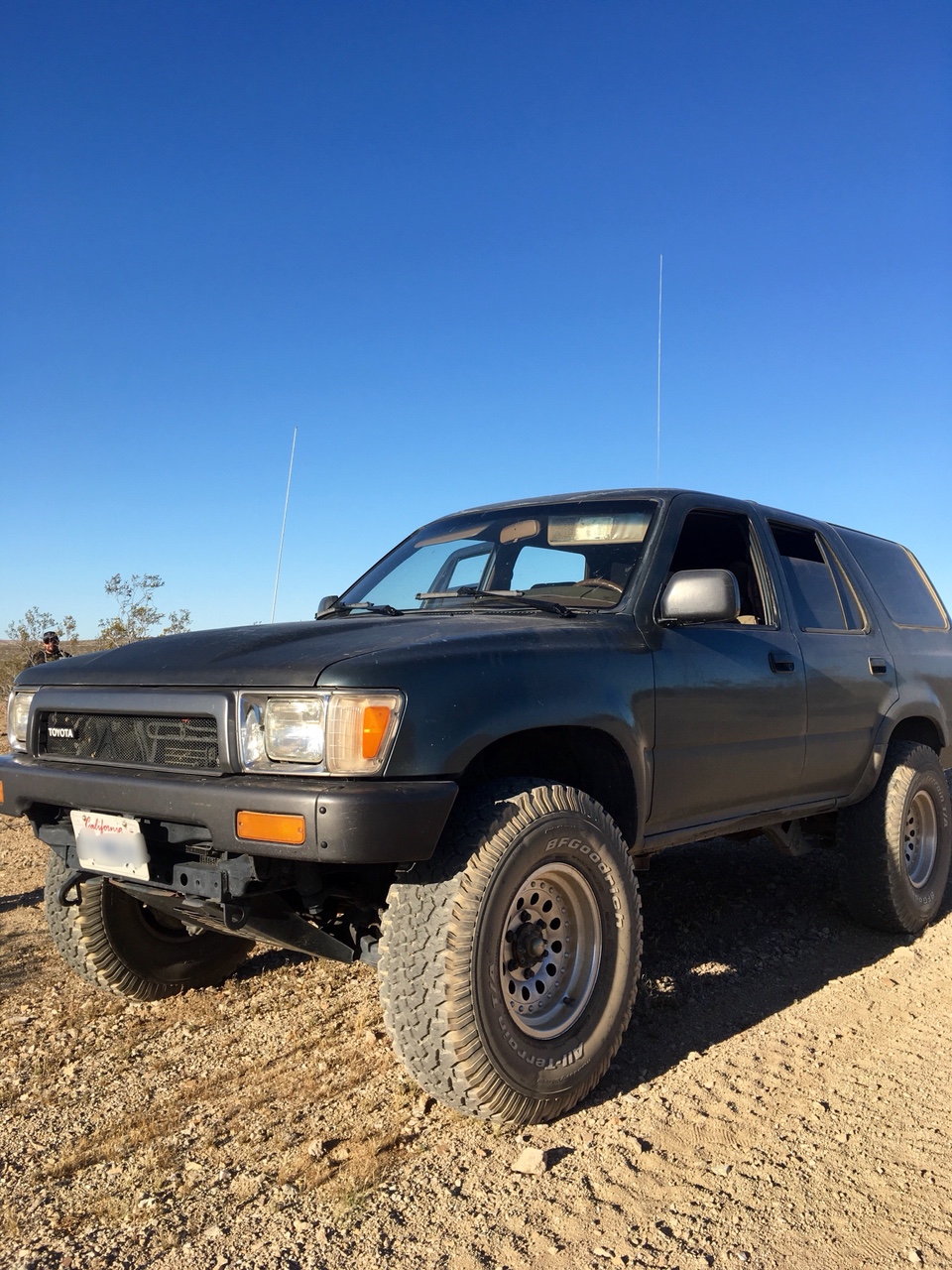 How it sits as of now.

For the past 5 years or so Turboyota has been hassling me to finish the LT kit he had partially built for someone else. There was a couple reasons I didn’t want to do it.

The truck is very smooth for what it is. And reliable. It’s smooth enough if the dirt to get along at a decent pace, and I wasn’t really into the idea of it being faster. As is I want a cage, and knew with LT it would be even faster and make me want to chop up the brorunner and go full dgaf with it and I wasn’t super into that.

I had kind of lost my deep interest and passion for gofast off-road and the runner has been more of a commuter and mountain trail truck for a while. My desert kicks were coming from a dirt bike now, so the truck took a back seat.

Then about three weeks ago I swung by Turboyota’s shop to grab some tires for a spare since he got some new to him bfg Baja ta’s. While I was there he started up with the ball busting about finishing the LT kit. I had been on this forum a lot looking at the rides section and the fab section. This day his ball busting worked. I pulled the arms off the shelf and got to work.

Here’s the link to that
http://www.dezertrangers.com/vb/threads/236828-Budget-Long-Travel

The kit is done and I just got home from the local parts house picking up some T100 axels to retain 4WD.

Maybe this coming weekend we’ll have the kit done and on the truck. I’d like to not use fiberglass fenders if I don’t have to but we’ll see.

Ideas for truck as of now.

Re-do rear shocks and mount outside of frame rails and get proper motion ratio and full travel out of stock link set up.

The main reason I wanted to make this thread is to document it as I go and to keep me motivated to work on this thing. My interest in off road has definitely been revamped thanks to turboyota and id like to keep the steam going.

I really wish I had more photos of the old stuff I’ve done to it so far but I don’t at this time. I’ll post up Work as we go and the shenanigans as well.

Here’s some random photos I have of the brorunner 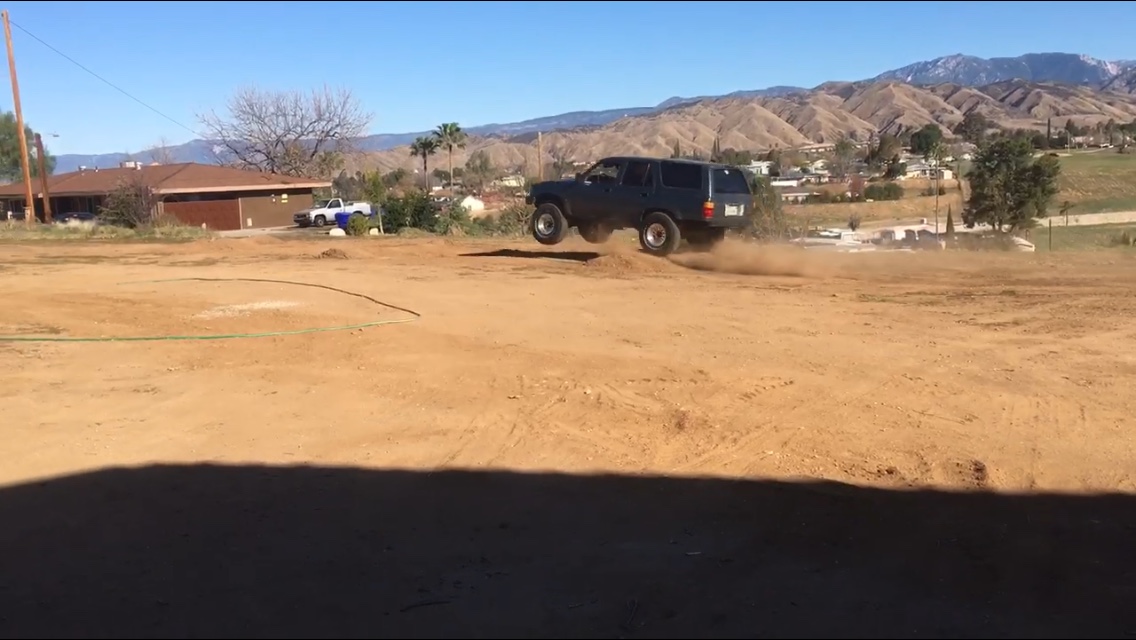 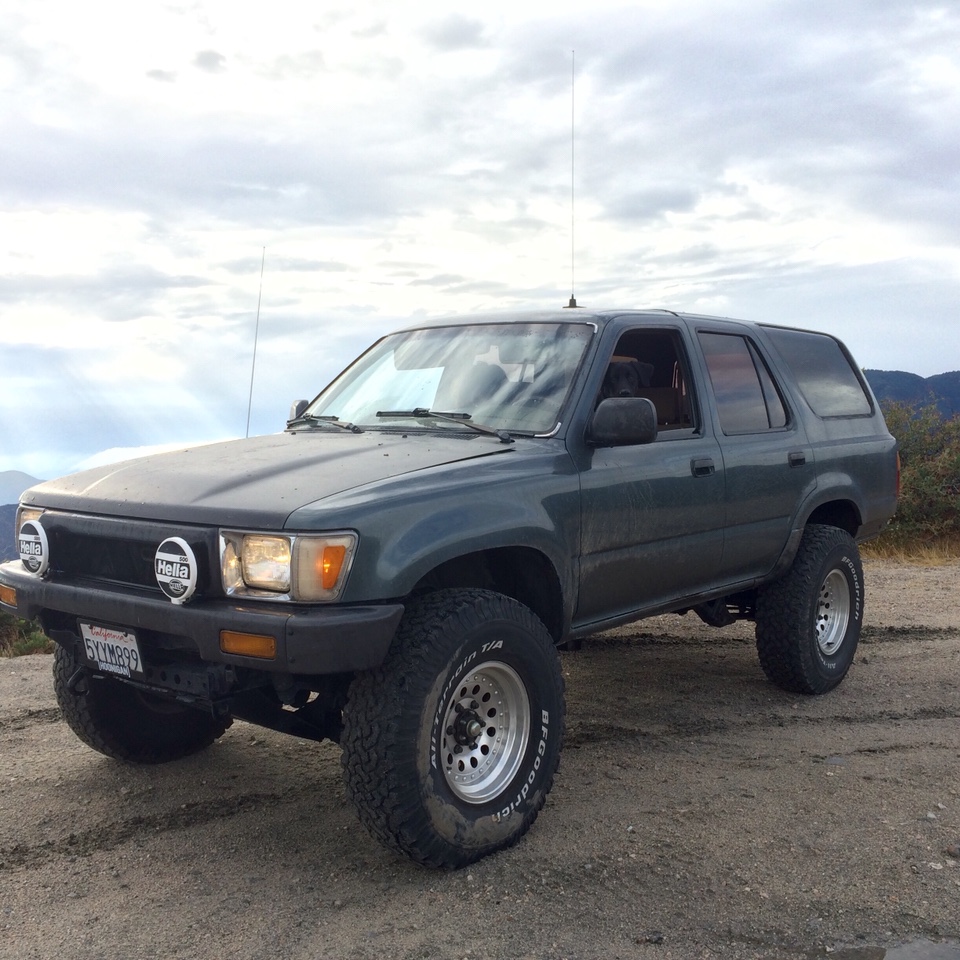 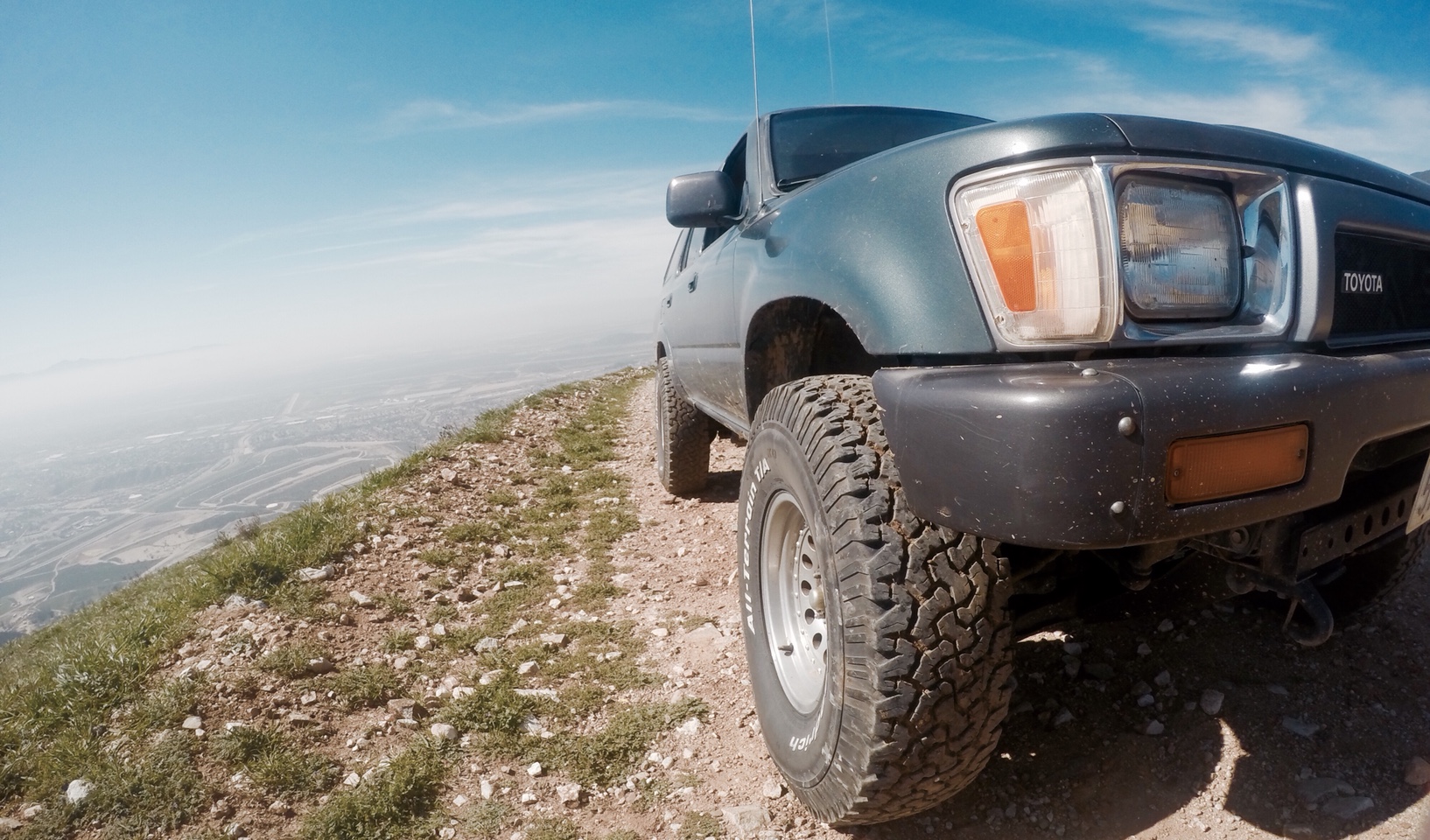 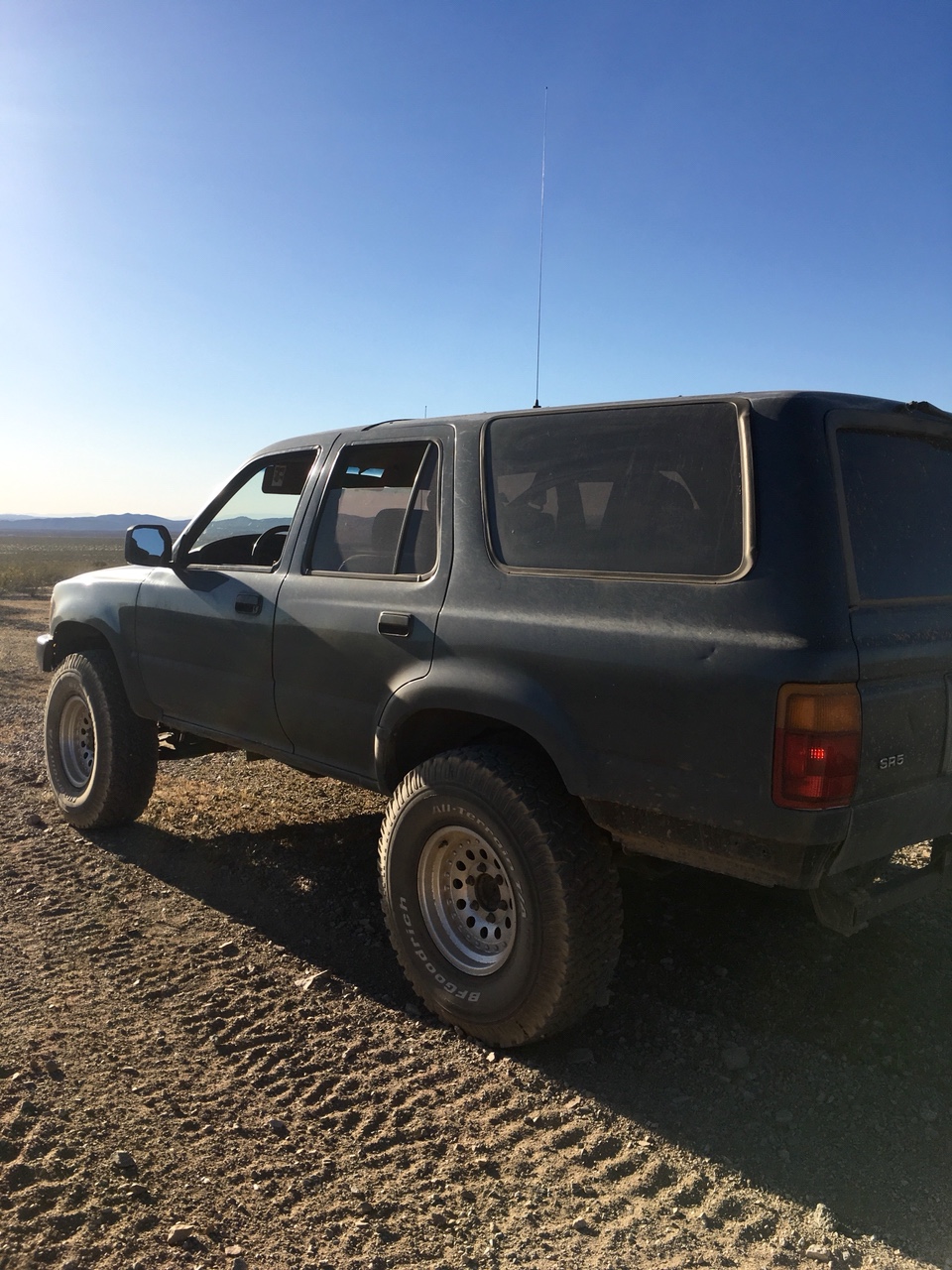 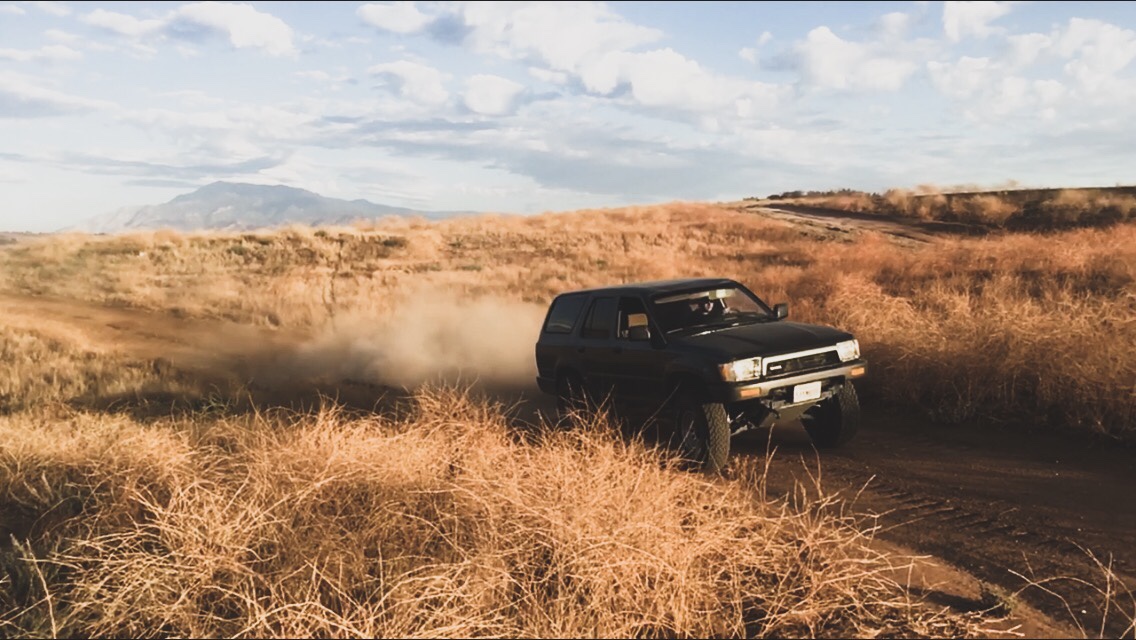 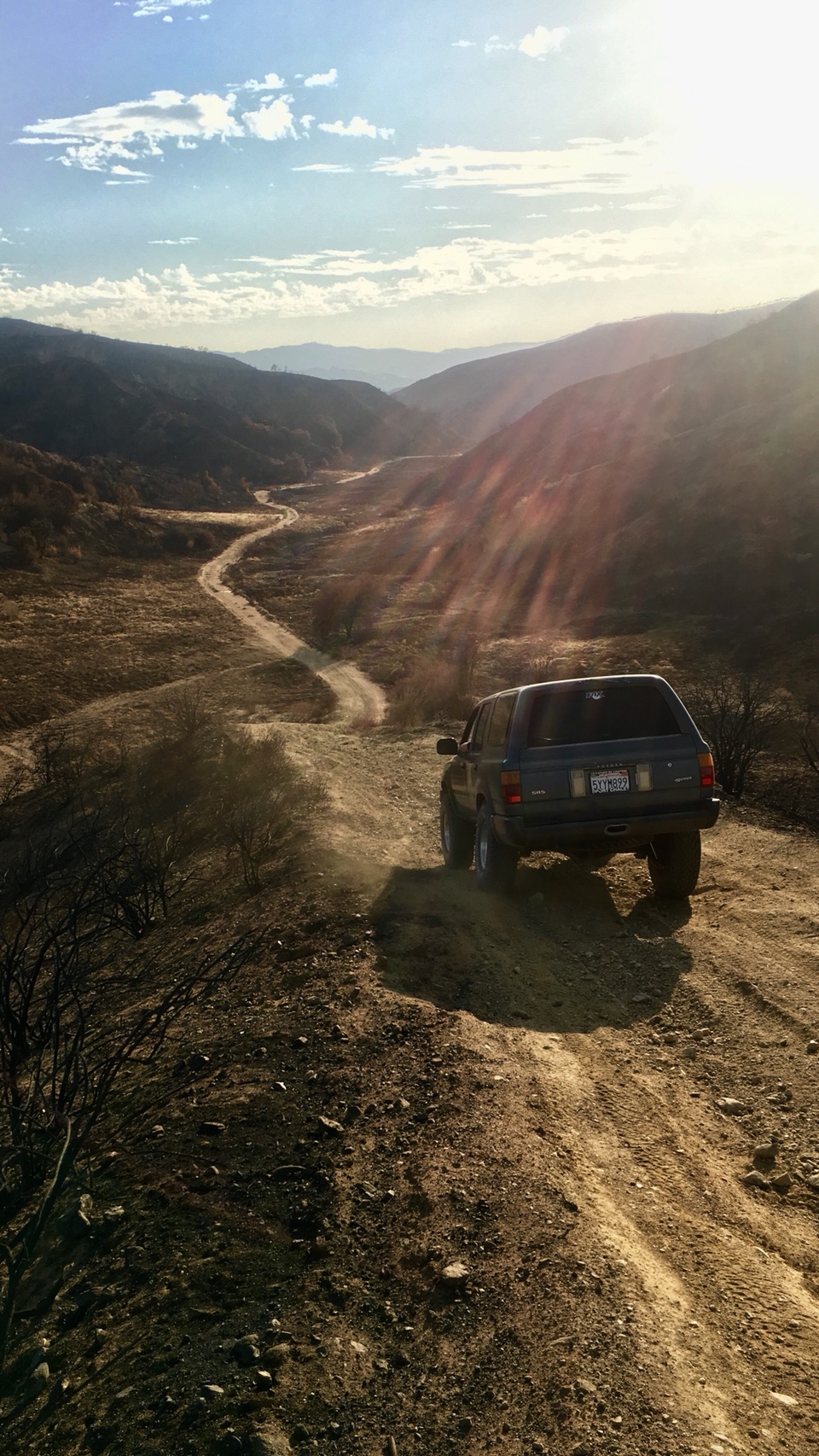 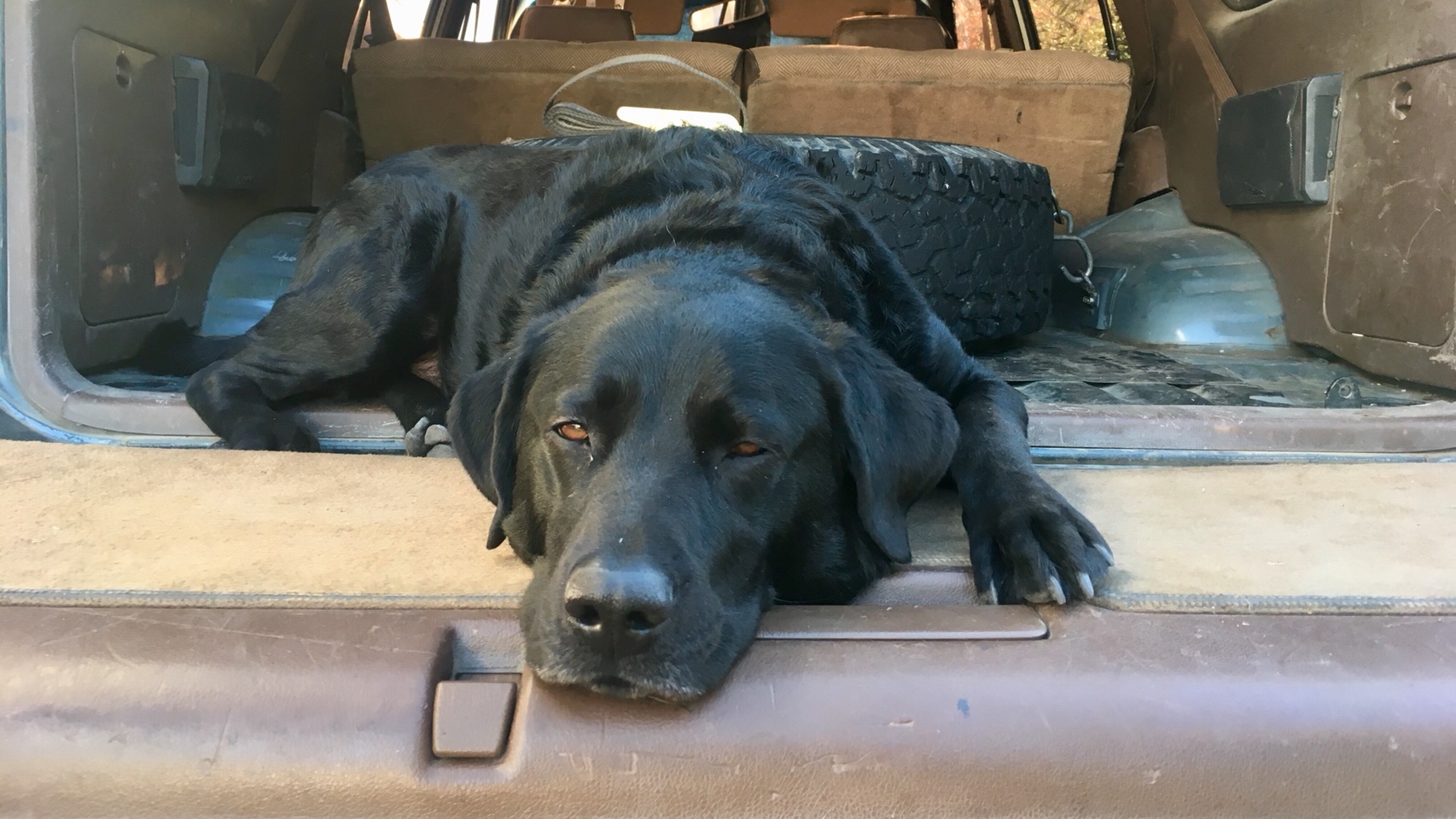 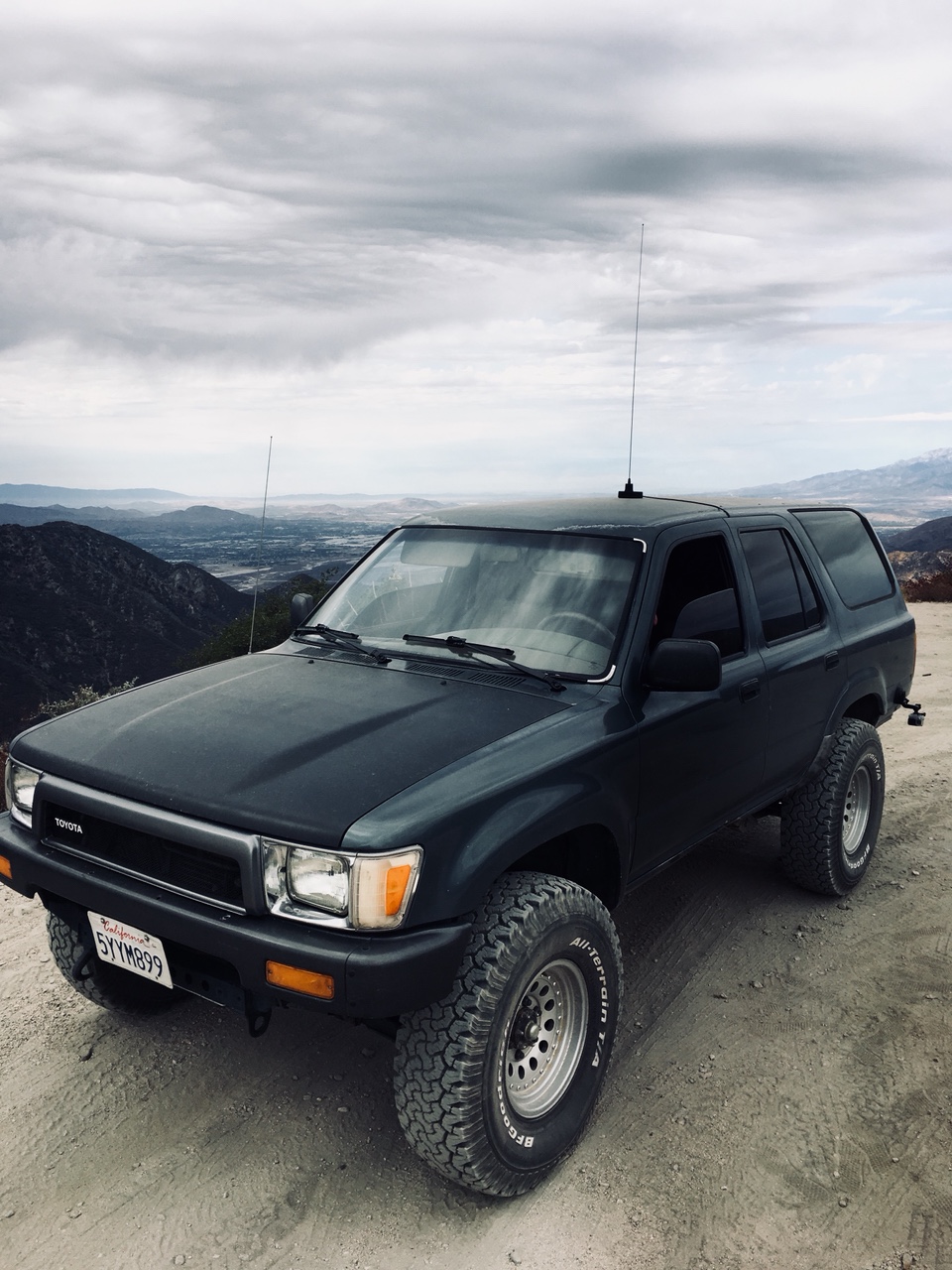 Fun fact, those things had about 4" of travel in the front stock. Take out all the bumps and they would cycle 7-1/2". Cut the lower bumps and angle them up with a floor jack under the arm and you can get 10" metal to metal or 8" with stock bumps installed. With the longer arms you should be able to pull 12" metal to metal or 10" usable. Your fenders will get in the way of that though, they will cut a couple inch's off your uptravel.

partybarge_pilot said:
Fun fact, those things had about 4" of travel in the front stock. Take out all the bumps and they would cycle 7-1/2". Cut the lower bumps and angle them up with a floor jack under the arm and you can get 10" metal to metal or 8" with stock bumps installed. With the longer arms you should be able to pull 12" metal to metal or 10" usable. Your fenders will get in the way of that though, they will cut a couple inch's off your uptravel.
Click to expand...

Horunner said:
If I remember right when turboyota and I put the bumps on it was limited at about 8” due to ball joints
Click to expand...

^^^That’s what I remember as well, but I was inebriated...

If we need to cut off stock rubber bump mounts and move the bump cans to get 12” of travel, so be it. It’ll be worth it.

Took some photos over the weekend. Did a little maintenance to the rear end so I took a photo of the weird little clevis thing I made to use the stock upper pin top location. 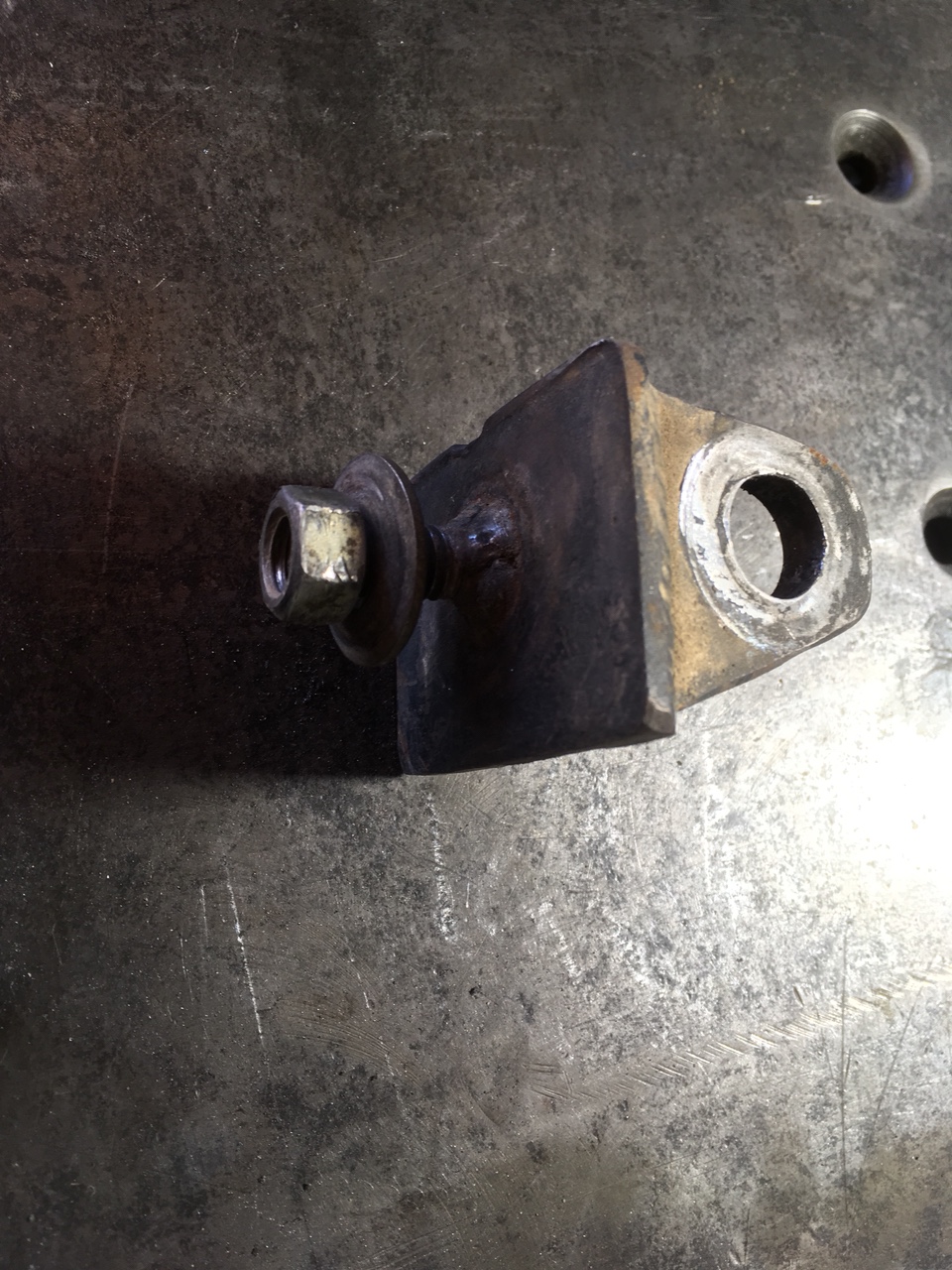 Also learned that if you have stiffly valved shocks and you plug all the free bleeds it’s really hard to get them out back together. Ended up leaving one free bleed. Anyone have a tip to doing it with no free bleeds?

With the minimal travel it has at the moment that’s super stiff but I did it to handle the more Smashy smashy once the +3.25 arms go on it probably this coming weekend.
Last edited: Feb 25, 2018

Turboyota said:
^^^That’s what I remember as well, but I was inebriated...

If we need to cut off stock rubber bump mounts and move the bump cans to get 12” of travel, so be it. It’ll be worth it.
Click to expand...

It’s always worth it for the Bro factor.

Front is put together. Need to trim the fenders to clear until I find a deal on glass.

Need to align it better in the morning.

Worked from 7:15 AM to 11:00P
with only some whoop section brakes and a quick lunch to partake in some spectacular German cuisine.

Only limit we found was the mounts for the lower arms. Plasma cut about an inch off of them to get ~12.5” of travel but limited to 12”. 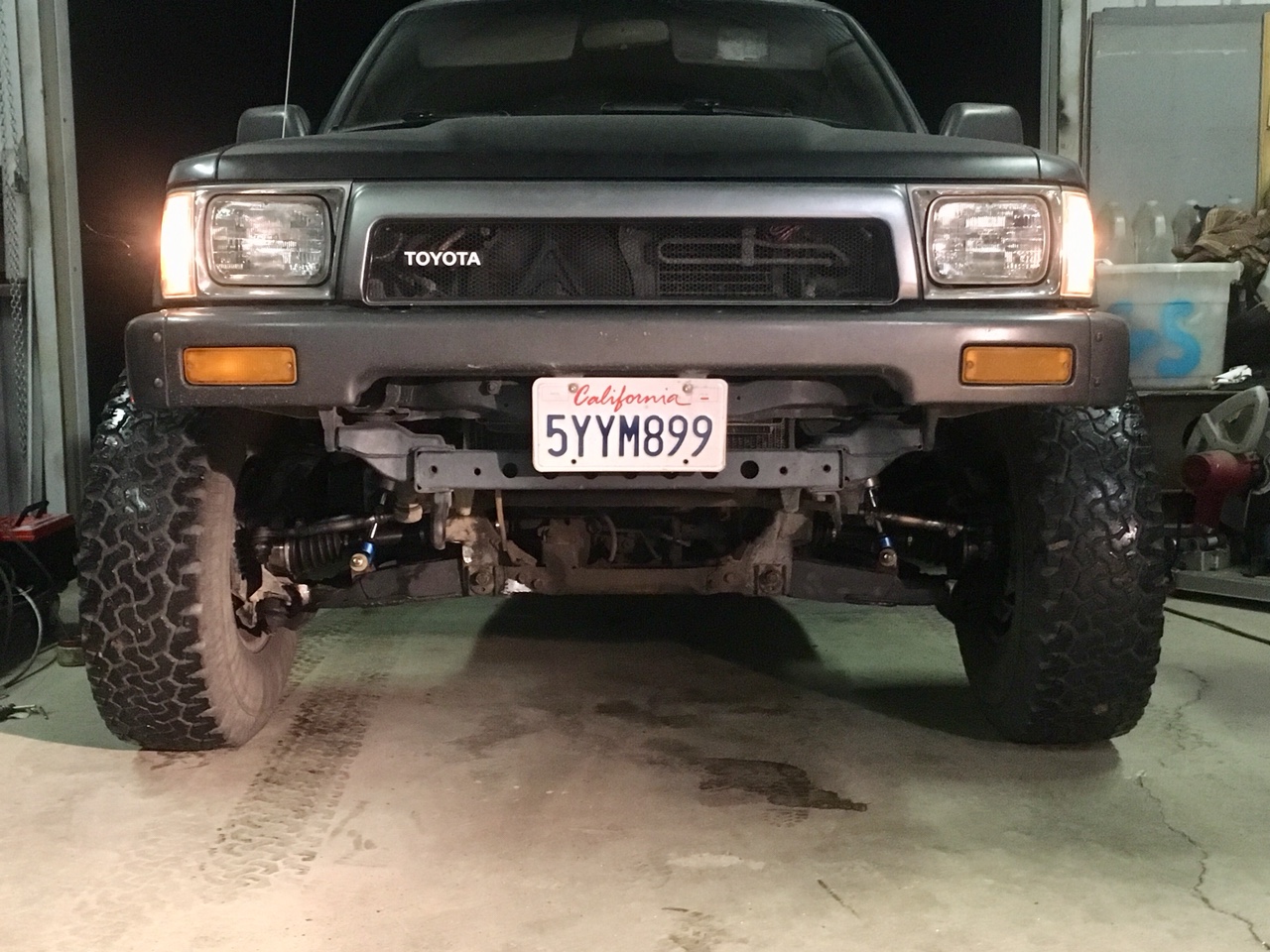 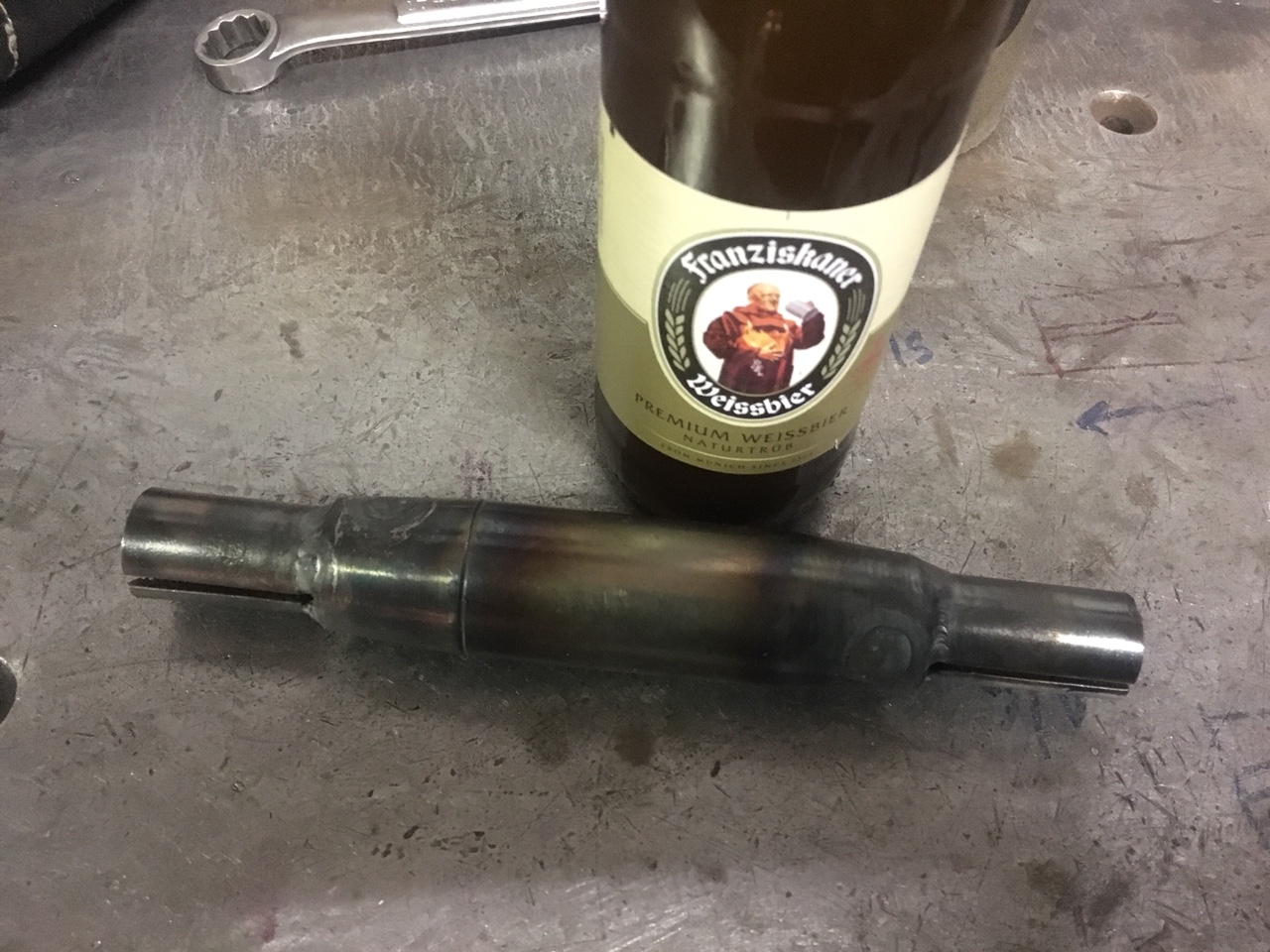 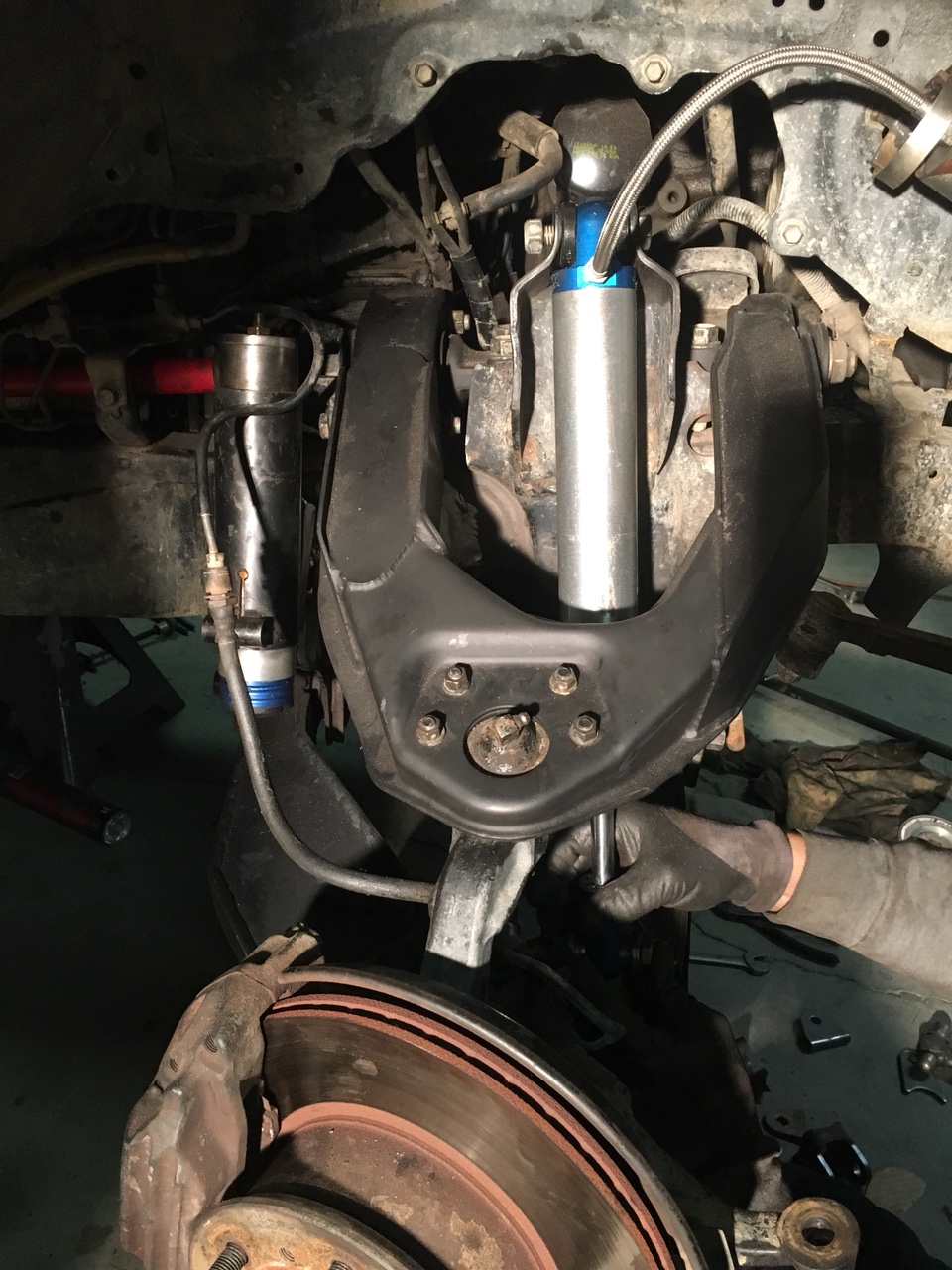 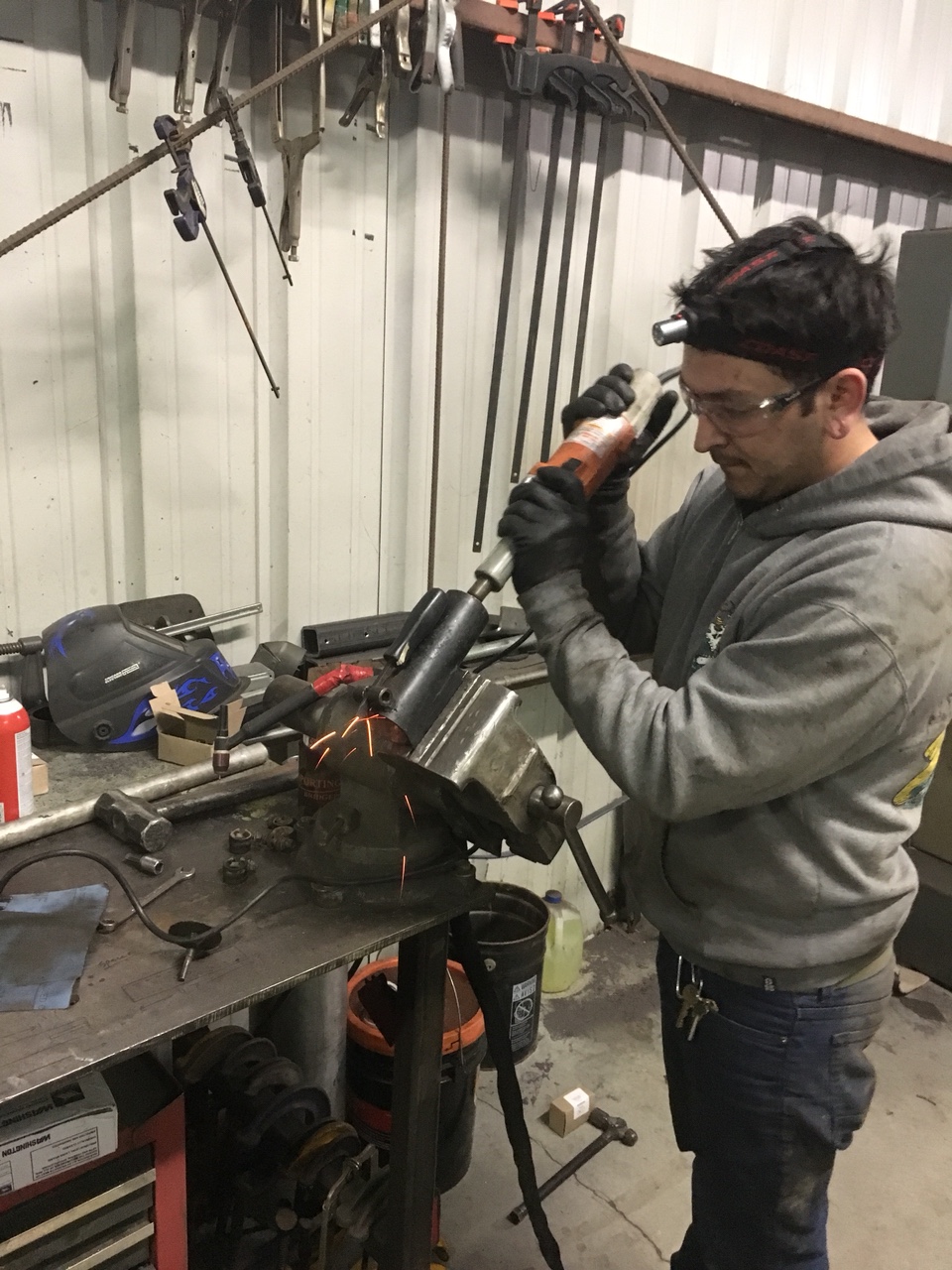 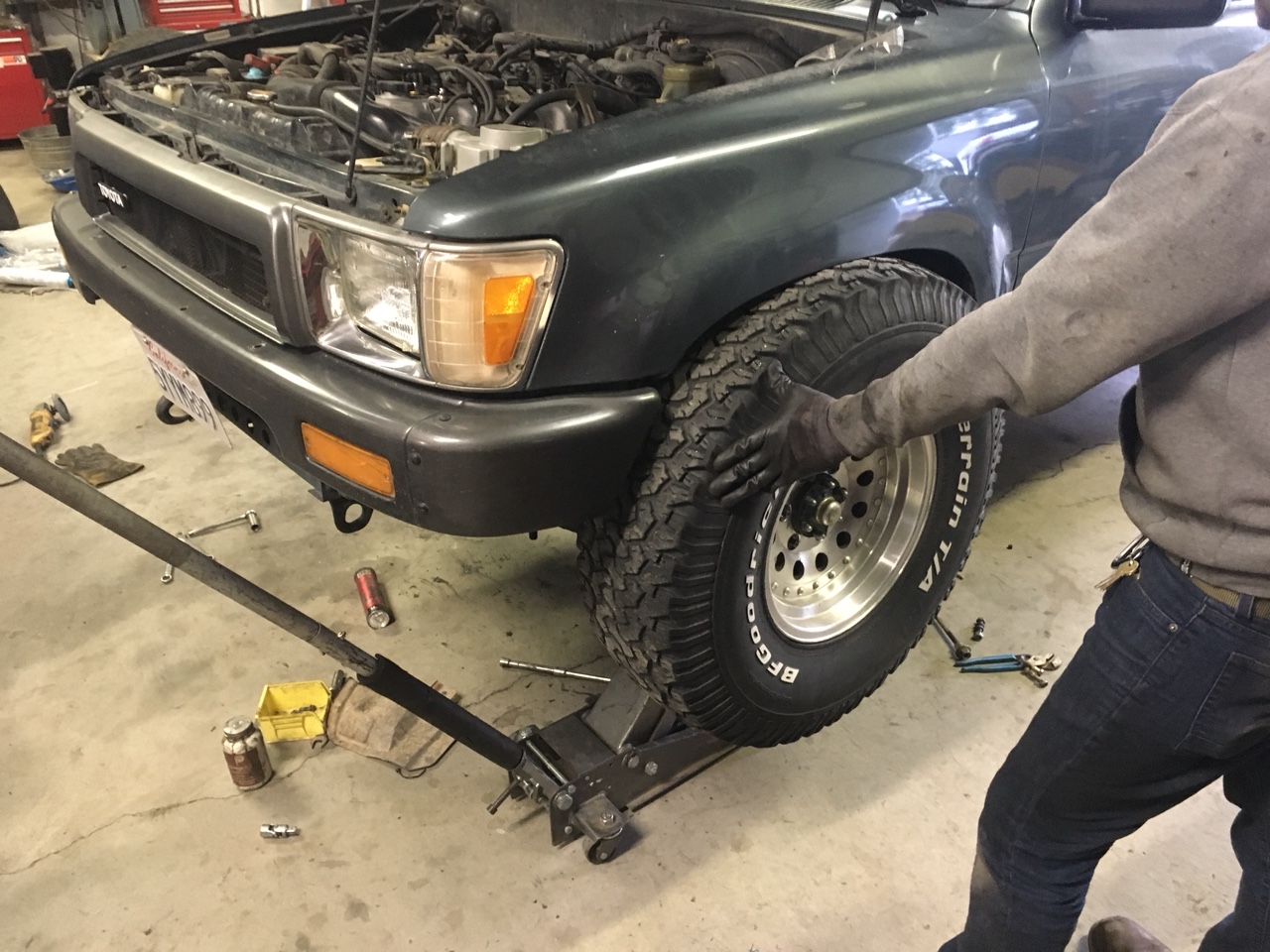 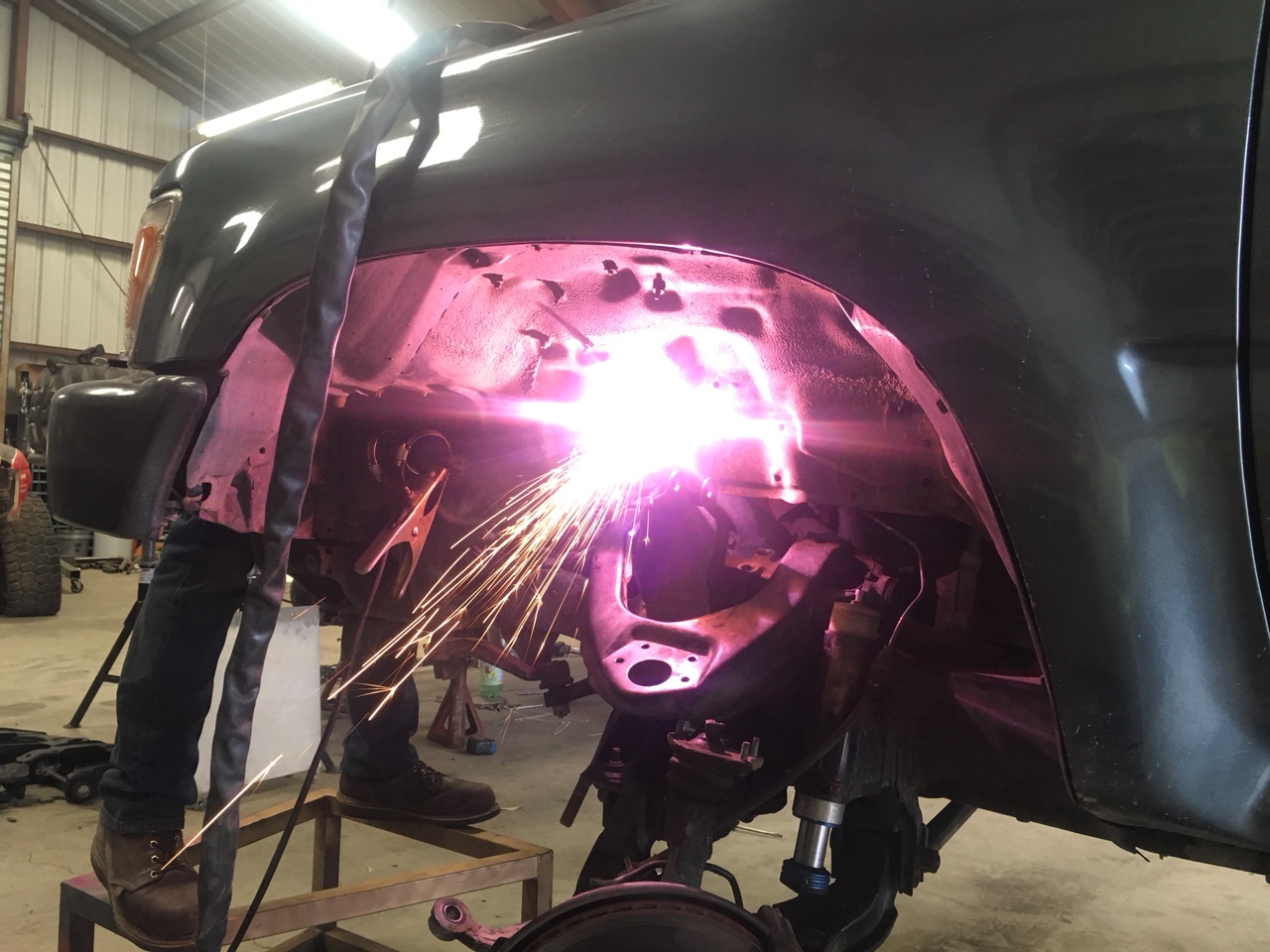 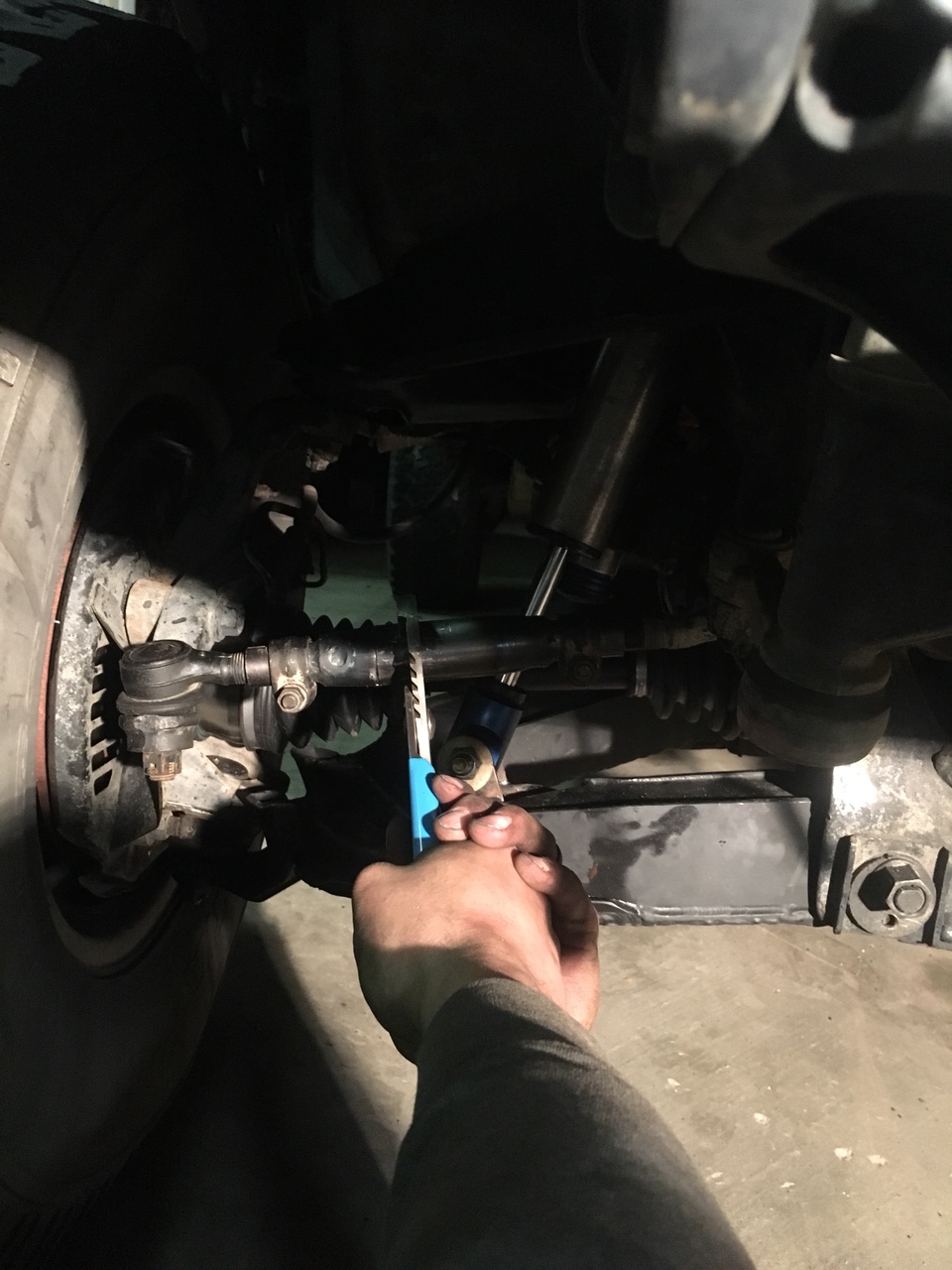 This was definitely a learning experience for me. From completing turboyota’s old rusty lt kit to installing it.

Wasn’t the hardest thing but very time consuming. The arms are Fucking beefy, but the ride just on the street so far is drastically different. Waiting to trim the fenders till I touch anything in the dirt.

Had an awesome day with turboyota and white trash kyle putting this together. Super hyped to finally have a LT horunner.

Tools spiked out of anger: 0

Hell yeah. I had fun yesterday. I originally guesstimated that we’d be done at 2AM, so 11PM completion was nice! AaaaWe also got the new driveline installed in the Turboyota and 1X hood pin mounted on the WTK F150.

Measurements for the tierod extensions if anyone is going to duplicate the budget build: 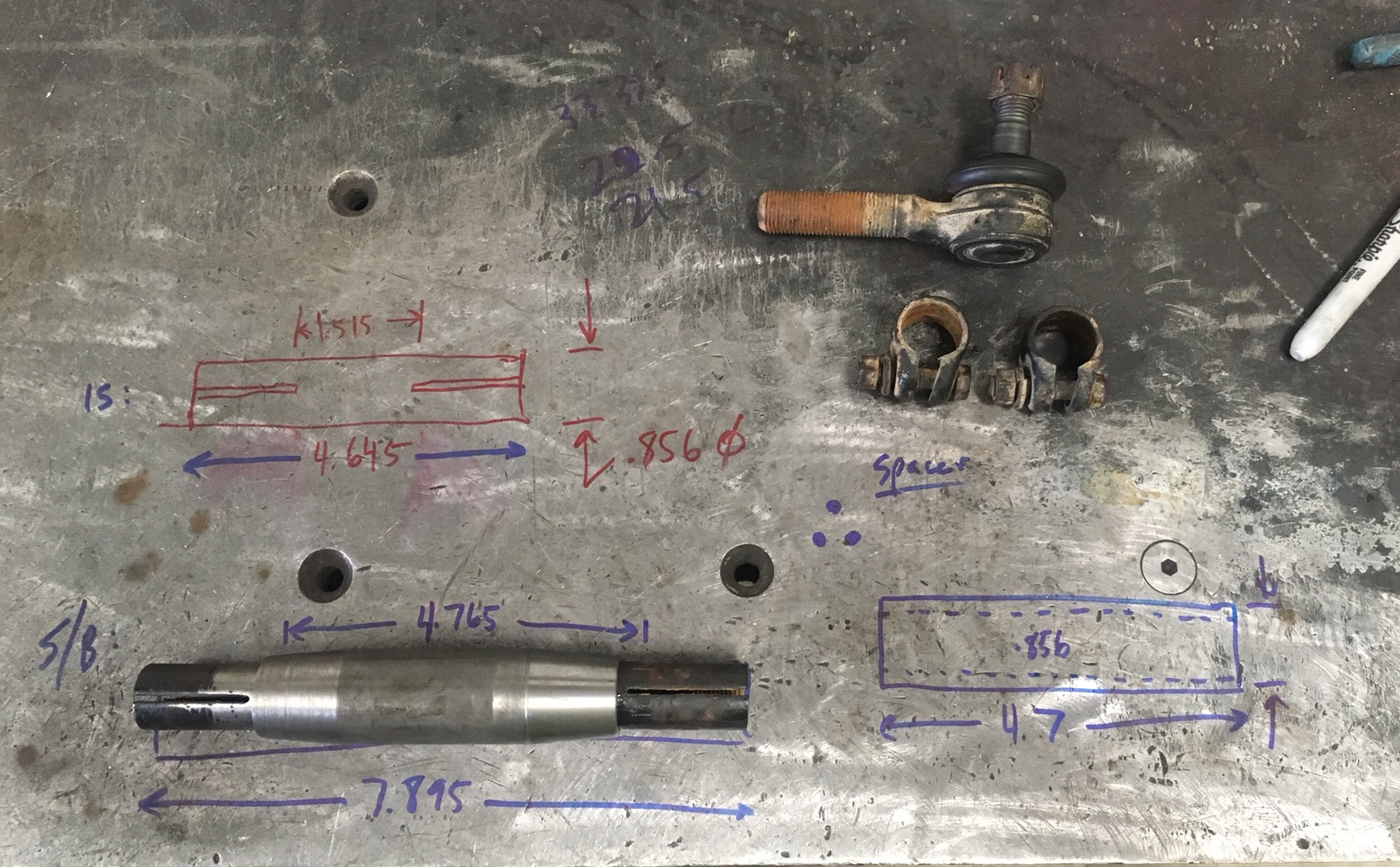 My shop is even messier than usual! Hahahaha!

The observant reader will notice the broken beer bottle between the welder and the front of the WTK F150. Funny. 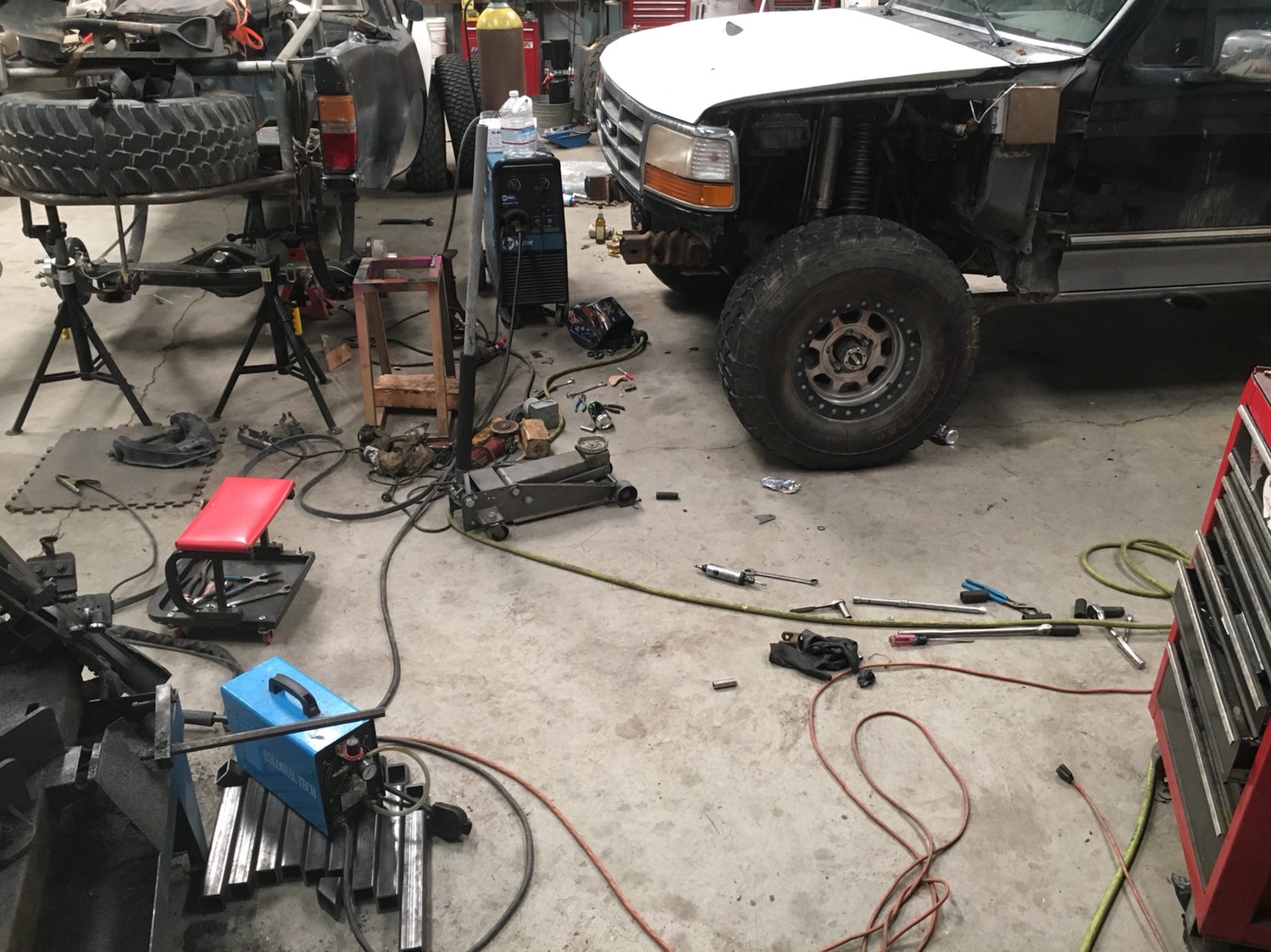