yeah thats kinda what we're thinking. papa wants to do everything EXCEPT spend the $$$ on new calipers but..... gotta do what ya gotta do.

got the brakes faniggered out.

welded up the cracks this morning.

papa does NOT want to, and he flat out will NOT put the tubes around the shocks right now. he'd rather cut the whole front end off and start new. he says "itll look stupdi as shit and hes not going to cut into the stupid expensive hood/aluminum work he had done"
(trust me, i knokw the alternative. so, dont barge in and say "would you rather crash and die" or anythign........ i know. i KNOW.)
so, i told him yes. lets do that! its summer right now, we wouldn't get it done but, it'd be better then something breaking halfway through the season than:

1. were stuck out in the middle of the dunes
or
2. we get it home before a major break happens, then papa is in a huge rush to scab it back together before the next dune trip
or
3. something seriously breaks (i.e. - THE WHOLE FRONT HALF OF THE FUCKING CAR FOLDS OFF AND WE ALL DIE WHILE KILLING OTHERS)
or
4. the whole front end breaks off, we land smooth as butter, no one gets hurt and were so excited that we chug a handle of jack each(were both sober for those that don't know) and then get so drunk we crash something else and die
OR
5. a plane crashes and everyone's mother dies(those that know me, will get that one)


SO WHATEVER. WE DONT AGREE ON A LOT OF SHIT. bitch session over.


i tried explaining why this wouldnt last more than a trip or two, itd be a pain to cut off when the time comes, and and and but....... hes stubborn.
HIS idea that he would o falready done if i didnt put a stop to it was..... put a big long/wide 1/4" thick plat along the whole bottom part over where its cracked, all the way up to the 1st lower a arm mount.


these pics below i took in case anyone has some paint/cad skills theyd like to share.....
(even though a lot of you said you would, and never did ((fuq ur mawms)))

nevermind a lot of that bitching about papa.....
even better, he doesnt want to do anything more than the welding i just added, for now! hah.

but seriously, he said he would like to cut the entire front end off and redo it correctly but, he wants to wait and see if 1 more season will last on this trans. he wants to get another big trans that can hold up to the horseys this motor is cranking out (not sure how the 2D has held up this long.... hah) and when we do that, were going to have to redo a bunch of shit on the back half of the car, as well. so, hed rather just stick it out 1 more season until he can sell enough of his 1900's playboy prime time mags and afford a bigger trans, tthen well basically cut the front and reaer half of the car apart and redo it all at once.......

AND SO,
the pussy getter is back in its rightuful home, in the chop shop.

plan to:
figure these fucking brakes out once an for all
figure out a small trans leak
and see how much of ur mawms poonanny hair it gathered together.........

yeah yeah. i know. no biggie!

At least weld some flat bar from the tabs to the tube. Spread that load out.

I would definitely cut out a plate that spans between the rear two triangular gussets and extends up under the rear mounts. Make sure to tie it in real well to the gussets and make it long and hard reaching up from the rear. 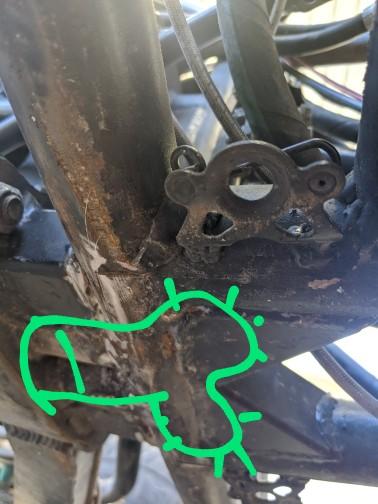 Motiracer38 said:
I would definitely cut out a plate that spans between the rear two triangular gussets and extends up under the rear mounts. Make sure to tie it in real well to the gussets and make it long and hard reaching up from the rear.

Sent from my moto z3 using Tapatalk
Click to expand...

Great design, I like how you showed where to tack it with those little marks, And where you might have to bend it.

Motiracer38 said:
I would definitely cut out a plate that spans between the rear two triangular gussets and extends up under the rear mounts. Make sure to tie it in real well to the gussets and make it long and hard reaching up from the rear.

Sent from my moto z3 using Tapatalk
Click to expand...

partybarge_pilot said:
At least weld some flat bar from the tabs to the tube. Spread that load out.
Click to expand...

I see what you're saying but, were just going to take it easy on the car this season.