We woke up Sunday morning around 6:00am again to the sound of midget nate bitching about his back... very well could have been the actual SOUND of his back. hard to say. Anyhow, got up, got moving and started packing. it was a beautiful 55* that morning and i sure as fuck didnt want to go back down to the heat. Nates wife was starting to worry more about the heat down in phx though and asked if we could just skip breakfast in jerome and book it home. We had no issues with that, i dont need either of them getting heat stroke in the fucking canned ham... it would live up to its name then.

Left camp around 7:30am again and we took the 71 road south off the rim towards Jerome. we cooked right along across the verde and headed back up the mountain. Rolled into Jerome around 8:30. Took a piss break and then rolled on. Cross over mingus mountain and hit the powerline trail down to Orme. Cruise the Orme Dugas road untill i hear "Hey i think i found a cattle guard jump, should we stop?" your damn fucking right we will stop! So jackassery ensued and we both turned around to hit the jump. it turned out to be more of a roller but still fun to play on. 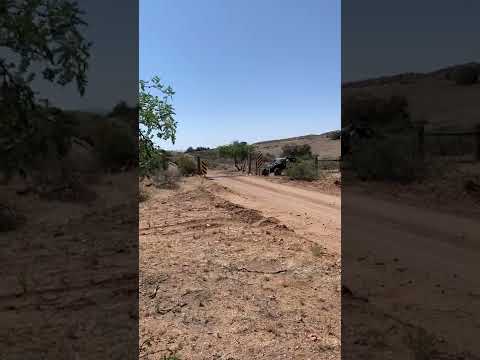 Cattle guard roller the other way.

the turbo noises are the best part lol

When we were done dicking around, we headed back toward Mayor to top off fuel. Got into Mayor around 10:30 and decided to throw together a quick lunch. fucked off for about 30 min and then said our good byes from there since we wouldnt be stopping again. Took bumblebee rd all the way back to the highway and just ran the 10 miles of highway back to new river road where we split off and headed back to our houses.

Overall, we had a fucking blast. Everyone was tired as hell but it was an awesome adventure. Saw more parts of AZ ive never seen and sucked in the cool temps. the best part was just not being in a rush and going with the flow. I have a hard time relaxing on a trip i plan but i made damn sure everyone knew up front, im not stressing to hit checkpoints. initially, mileage was suppose to be in the 400-450 range and i though that was alot but we wound up doing 530 miles over 3 days after re-routing some areas. about 50 miles total of asphault.

Carnage from the trip was minimal,

the Retard TT:
the Canned Ham:
So overall, fuckin minimal as shit issues for what we did. good times!!
Reactions: ucd baja and Midget_Nate

yeah we gotta work on your spotting skills lmao

idk what youre talking about haha

I did bring a tall boy in spirit of the sleepy camp fire man though! haha
Reactions: dose and Turboyota

Midget_Nate said:
If they still free I will Coors is the drink of choice this week

I did bring a tall boy in spirit of the sleepy camp fire man though! haha
Click to expand...