fucking dandy..... good seeing you guys for a few... Sorry I dipped out... had lay down some night hot laps with my little dude

awesome trip nice to meet all of you guys.
Reactions: dose and Turboyota

Holy creative writing shit talking write up James! You make turboyota trip reports sound boring.
For the record I “worked” a 12 hour night shift 1/2 hour before starting a 650 mile drive to your house in a noisy linked caged solid motor mounted prerunner. So yes I was tired, punk.
Reactions: bajaf250, ucd baja, mikey09120 and 4 others

dose said:
So yes I was tired, punk.
Click to expand...

dose said:
Holy creative writing shit talking write up James! You make turboyota trip reports sound boring.
For the record I “worked” a 12 hour night shift 1/2 hour before starting a 650 mile drive to your house in a noisy linked caged solid motor mounted prerunner. So yes I was tired, punk.
Click to expand...

Of all the people, you put the reliability of a prerunner to the test last week. What was your total mileage including from and to your house?
Reactions: dose

Of all the people, you put the reliability of a prerunner to the test last week. What was your total mileage including from and to your house?
Click to expand...


Sent from my iPhone using Tapatalk
Reactions: ucd baja, Horunner, Turboyota and 2 others

That is fucking epic!

Some got up around 5:30ish, others not till the sun came up around 6:45ish. i was the latter. Somehow, Turdblow made it into his RTT at some point that night. yes, we all left his ass outside as good friends would do. We packed our shitboxes back up and headed toward the road from the wash. We only had 70ish miles left, should be a short day right? HA! 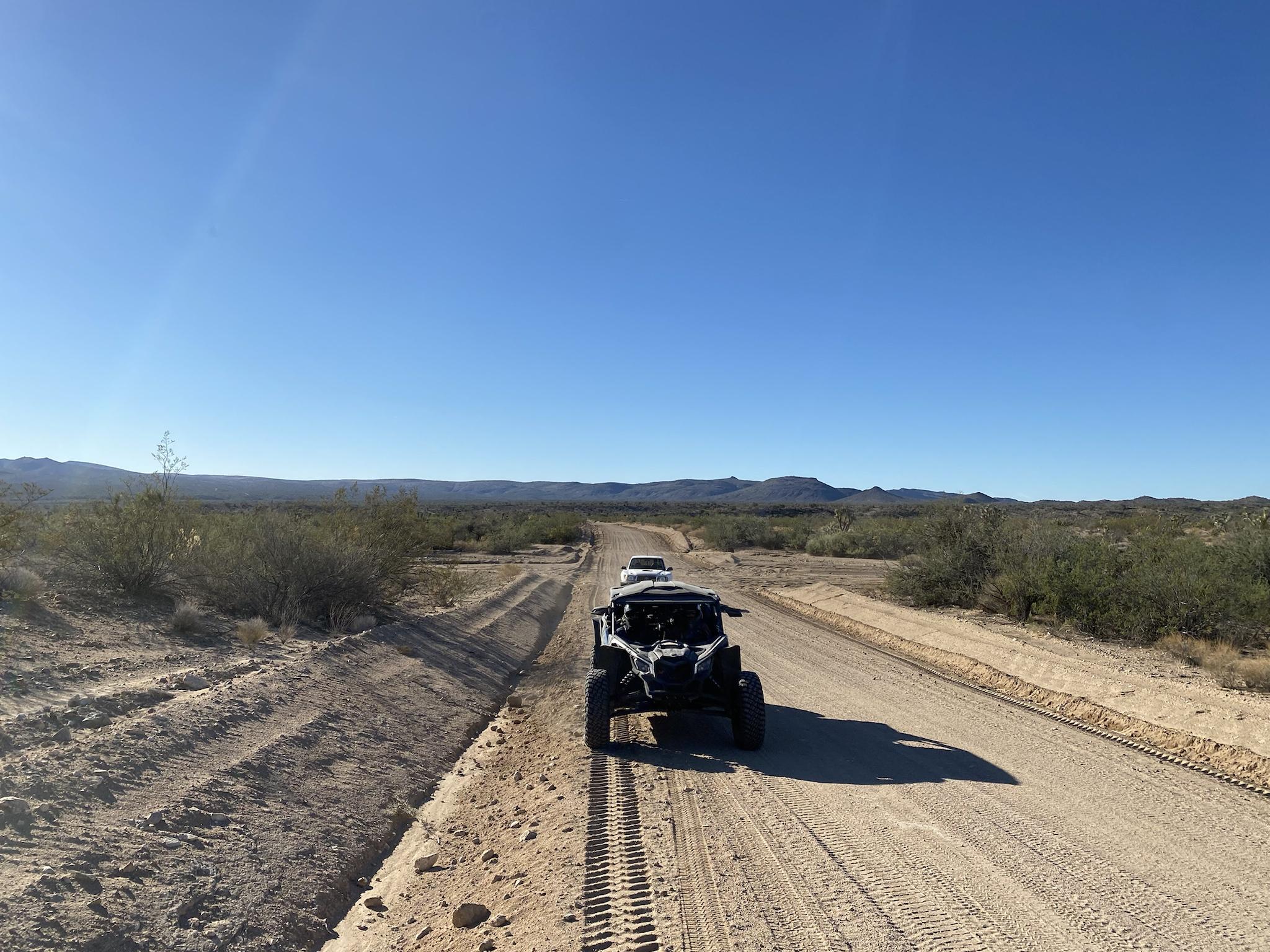 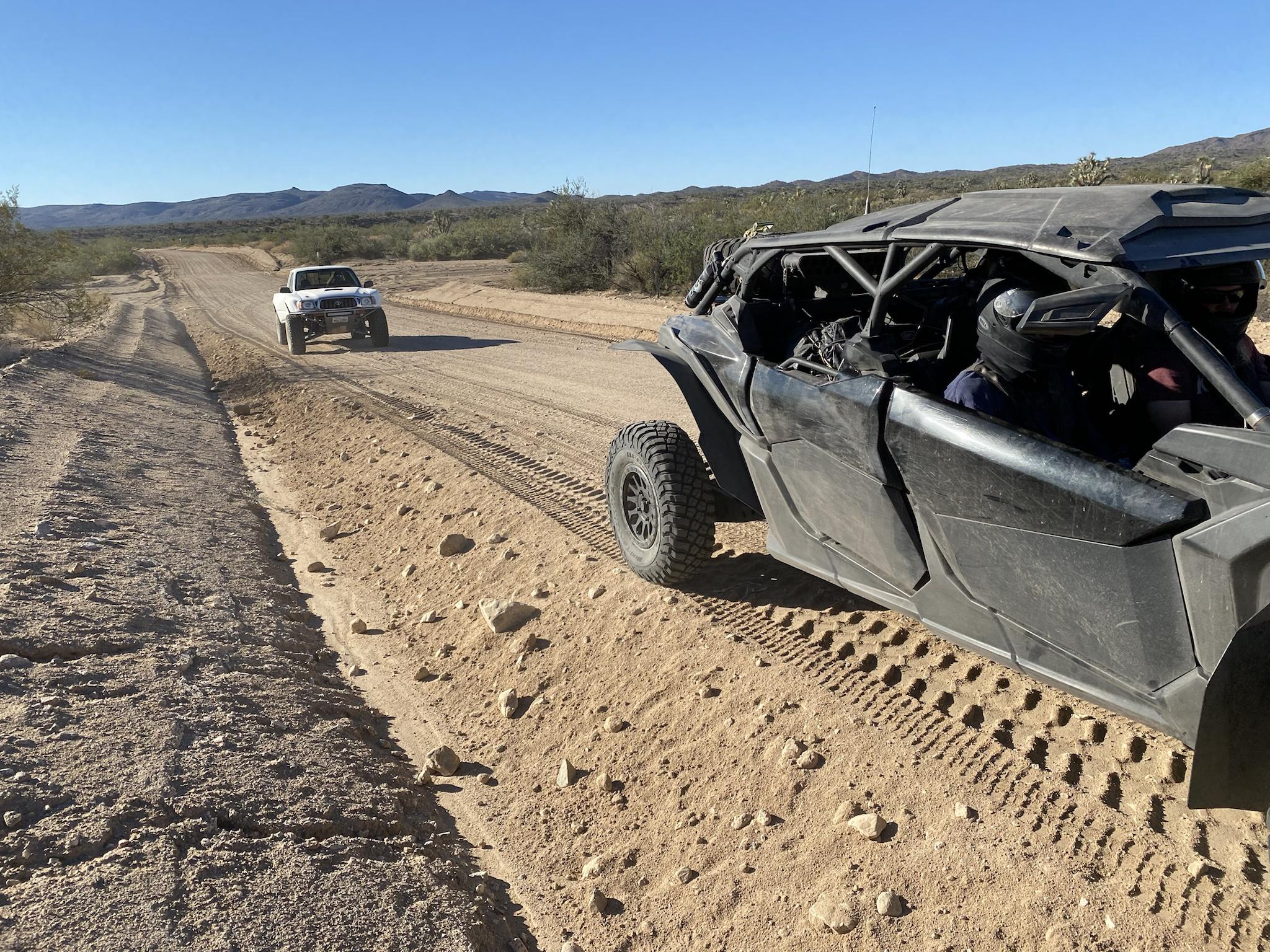 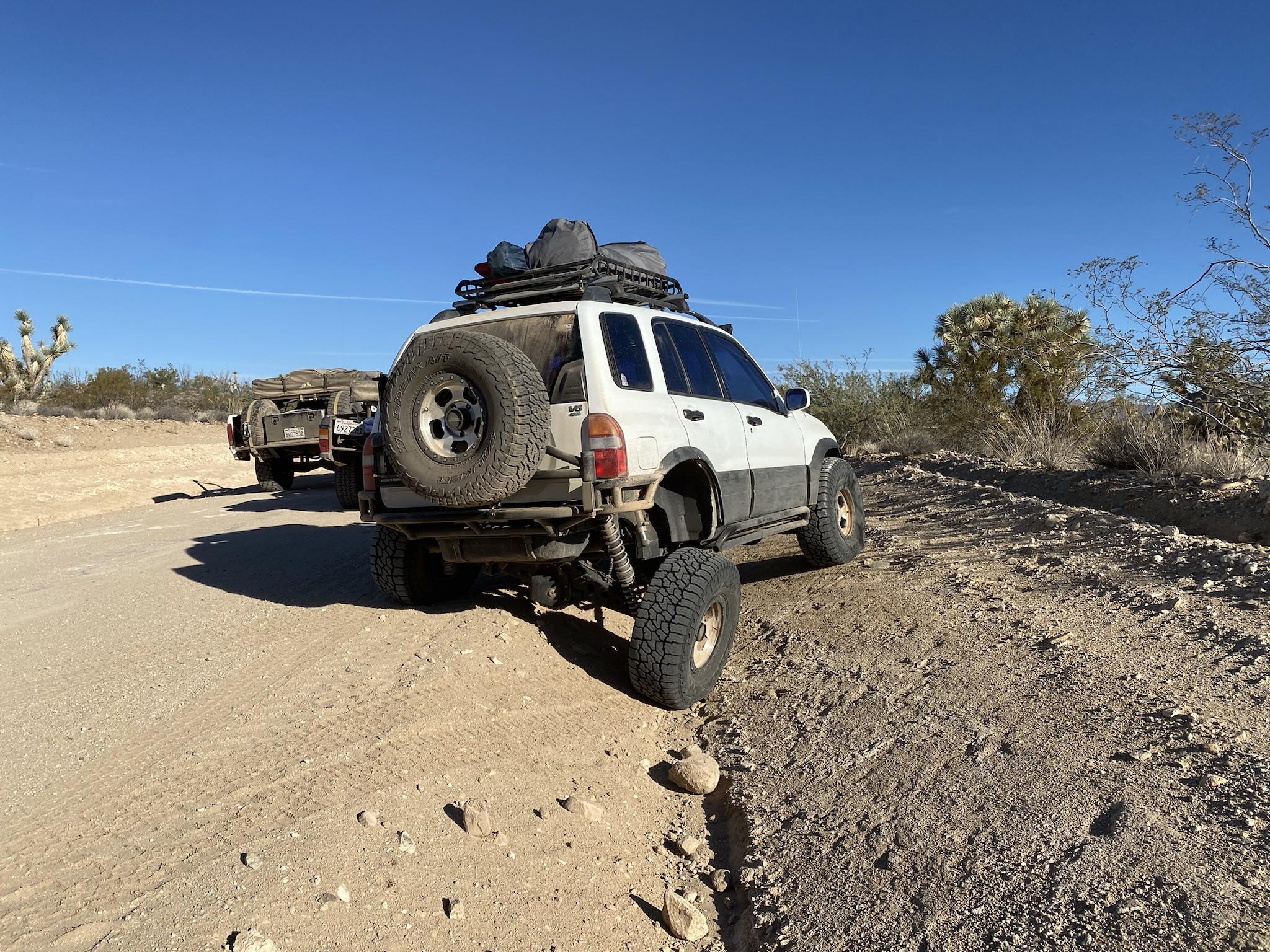 I dont know if anyone got WTK's rig all flexed out the day before but that cock sucker is bendy.

Gathered everyone up and we headed out. This road stayed graded the whole way out. Initially it was windy and you could only do about 50-60mph, then it opened up into a few straight and some decent high speed jumps. Sadly, my comms were being shitty and as i was calling out the jumps, only one or 2 guys got the message. I need to check for corrosion on my antenna and move it to the roof. Anyhow, we get to the end of the road right by the I40 and turdblows rig just fuckin dies. well its 5:00 somewhere even though its 10:00am here, time to split some pop tops while TunerAndrew and Turdblow get to work. 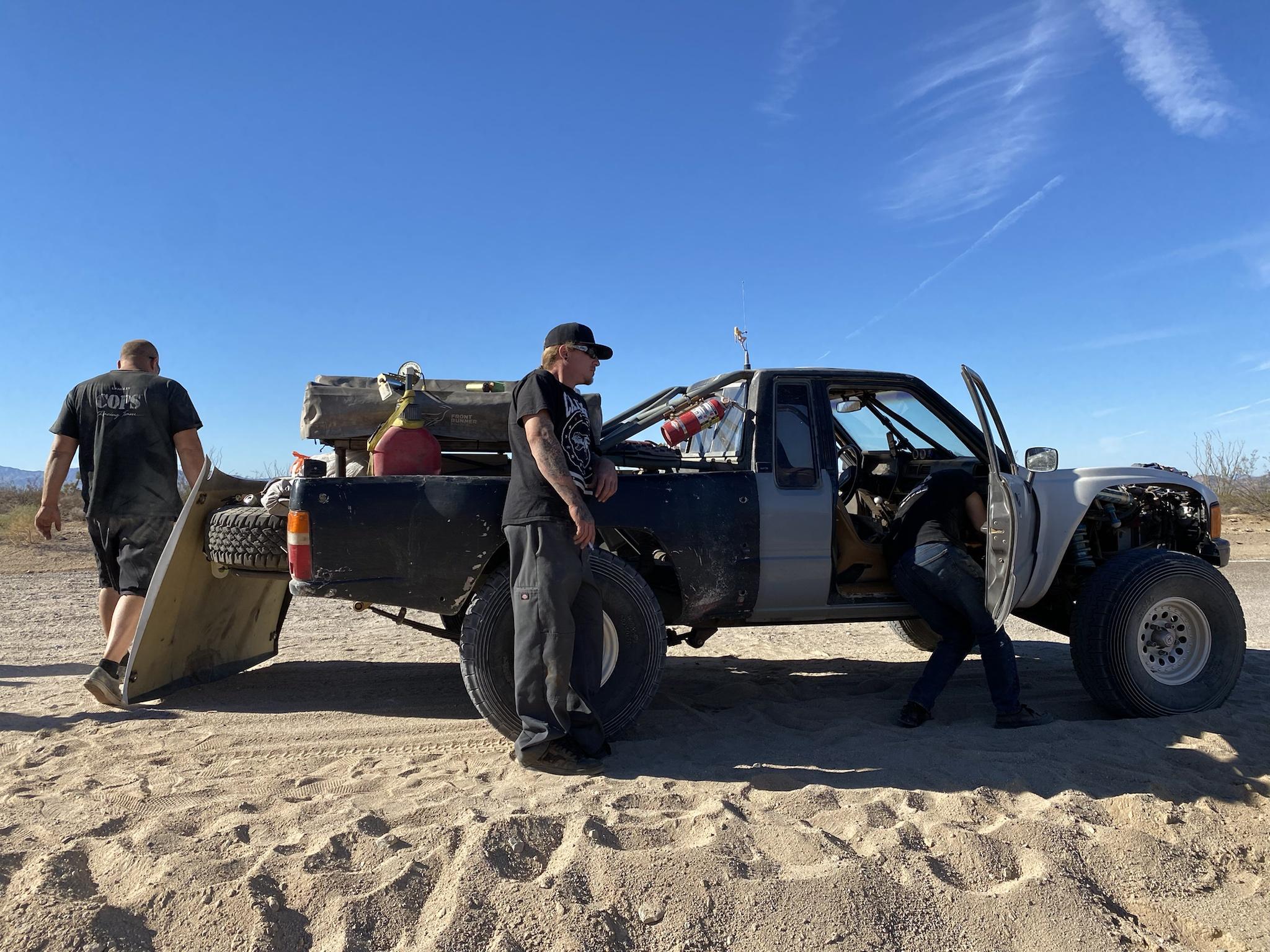 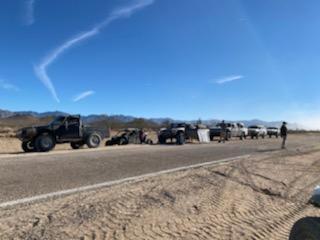 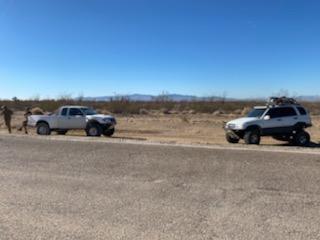 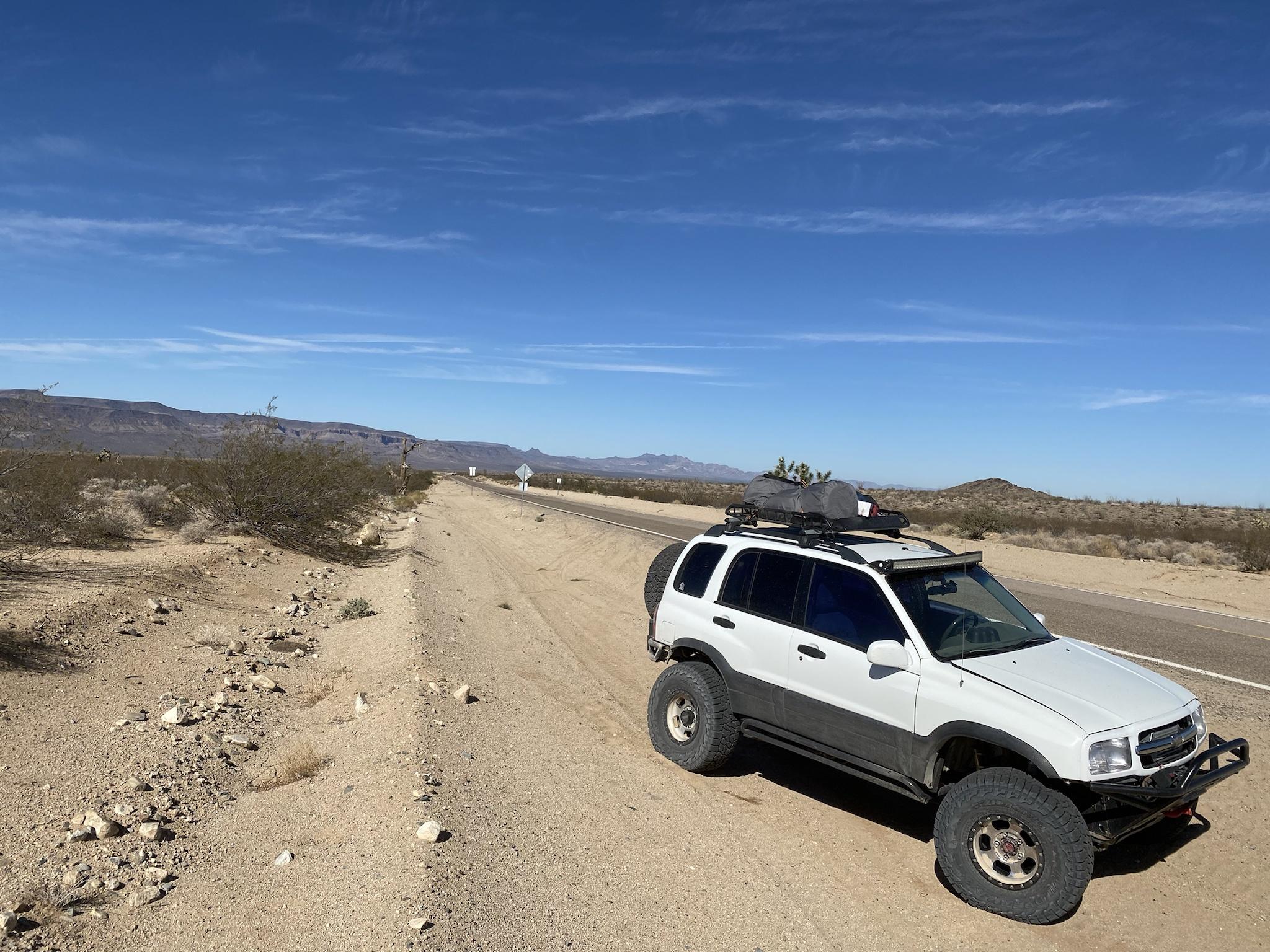 Initially we saw no fuel pressure. ok, test for power at the back of the truck and there is power. Cool, pull the pump as its easy enough, Turdblow has a spare pump and we get to work making it work. 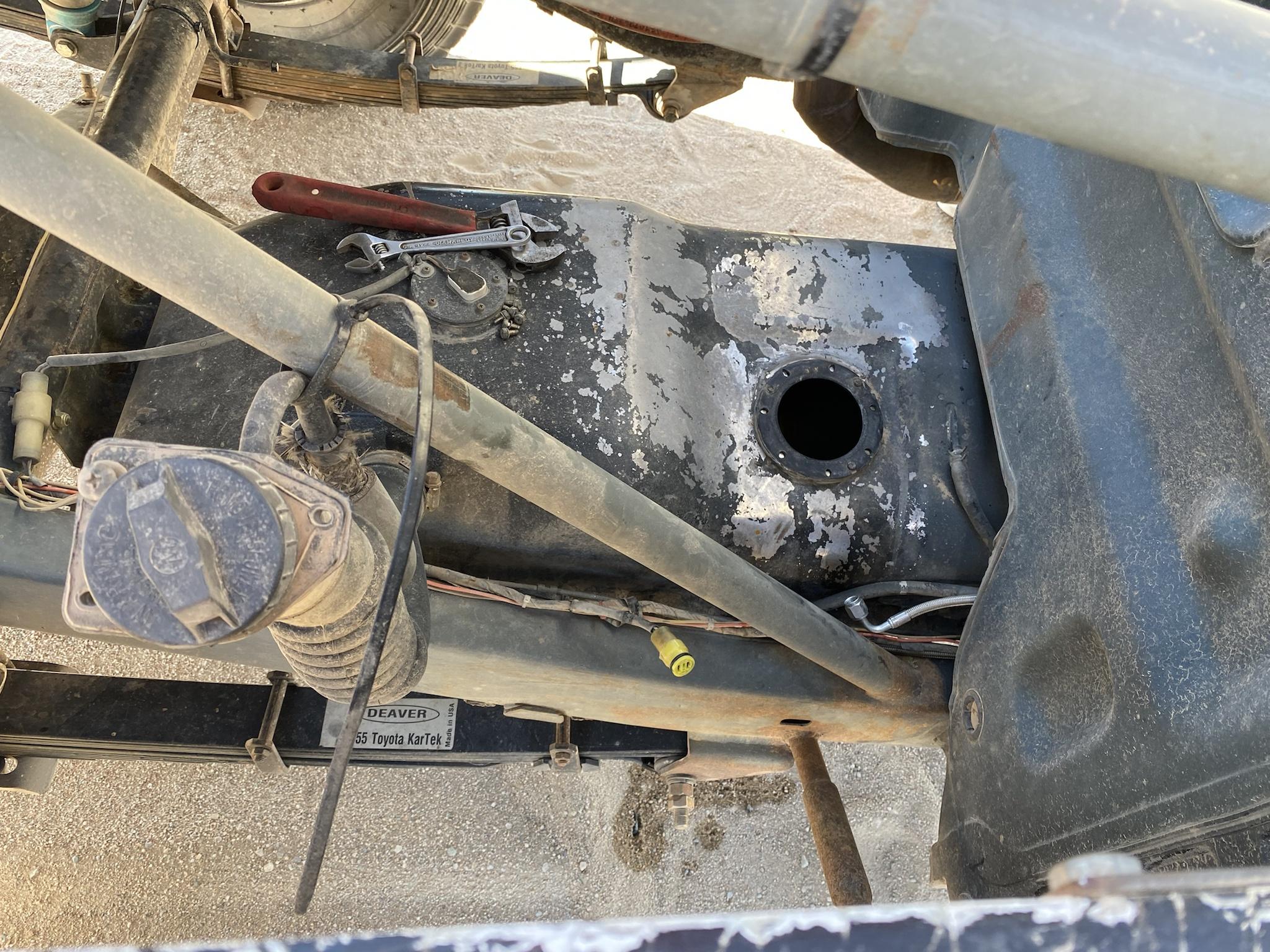 Wellllll come to find out, wasnt that simple. it was a stock drop in pump and he had a LC Engineering walbro style pump inside so connectors are different and we had no nuts to connect the stock pump to eyelet style wiring. i then remembed i carry an aftermarket intank style pump for my own shit box. pulled it out and it would pretty much just plug and play into his rig. hell yes, threw it in, started it up and truck idled for 5 min as we all packed up before it once again died. no fuel pressure. i know that pump is good but after a quick test, power is gone. tunerAndrew thinks its the relay so we swap it. Start it up, makes it 10 min of idle and dies just as TunerAndrew gets in the truck. Hmmm... then WTK comes over and remembers he did a not-so-great connection at the ignition switch when he rewired the truck and thought it might be that. truck fired off and wiggling the connection didnt really do much but now its 5-10 min in at idle and still going, fuck it, lets load up and hit the fuel station. Moment we start to go, that fucker died again. So now, TunerAndrew and WTK are just going to fucking hotwire the pump off an ignition hot and bypass all the fuel pump wiring. As TunerAndrew is plugging a spade into turdblows fuse block, shit starts arcing in the block. AH HA! theres the cock sucker causing the issues. one of ebays exquisitely made, top notch fuse blocks just wasnt having it. it was making bad connection and the moment it would heat up, connection would break. Im not entirely sure how TunerAndrew fixed it but he got it running and we headed into Yucca to get fuel.

Fuel, ice, beer, and food was replenished at the Pride fuel station (which was brand new and very welcome cause there was no damn way we were going to make it to golden valley on the fuel we had) and we headed toward a wash that was on the east side of the mountain range of Laughlin. we dropped in and i hammered down. i was just having a fucking blast and made it about 10-12 miles up the wash before i made a wrong turn and got in some fucked up shit. once again, im haulin ass, hit a wash out and sky wheelied this bitch. god damn it! knocked the camber out and hurt the tie rod some. I stopped, Jbrappp and midget nate were right by me and found the correct wash area to run so we jumped over there. Everyone else was all dicked up behind me. Some took wrong turns, some got fucked up in the soft sand but they started turning up to where i was slowly. WTK got a pin hole in an heater hose so he started into fixing that, i started my second alignment and Turdblow called over the radio that Dose blew a tire and they are fixing it. 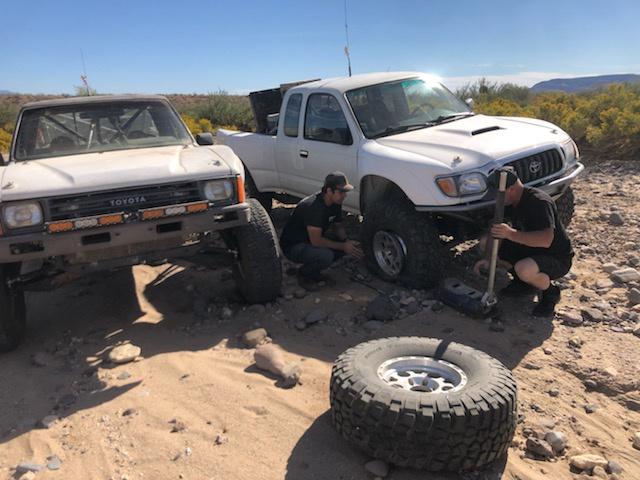 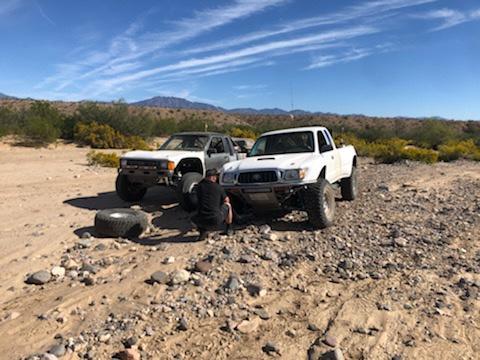 No pics of the heater hose fix on WTK's truck but it was simple enough. About 45ish minutes later, we were back on the move again. Its now about 1 or 2 o'clock in the afternoon, so we really have not gotten far. Still another 40 miles to go. its all good though, shit happens when you party naked.... i mean when the trucks break down.... yeah thats it. We jump out of the wash and hit a smooth graded road for 5-7 miles and then jump back into another wash, cruise that and hit some desert trails that will now take us up and over the mountains and down into bull head city/Laughlin. As im headed up the road, i hear a call that someone smacked a rock and they had pulled over to check out the truck. i stopped on top of a peak to wait 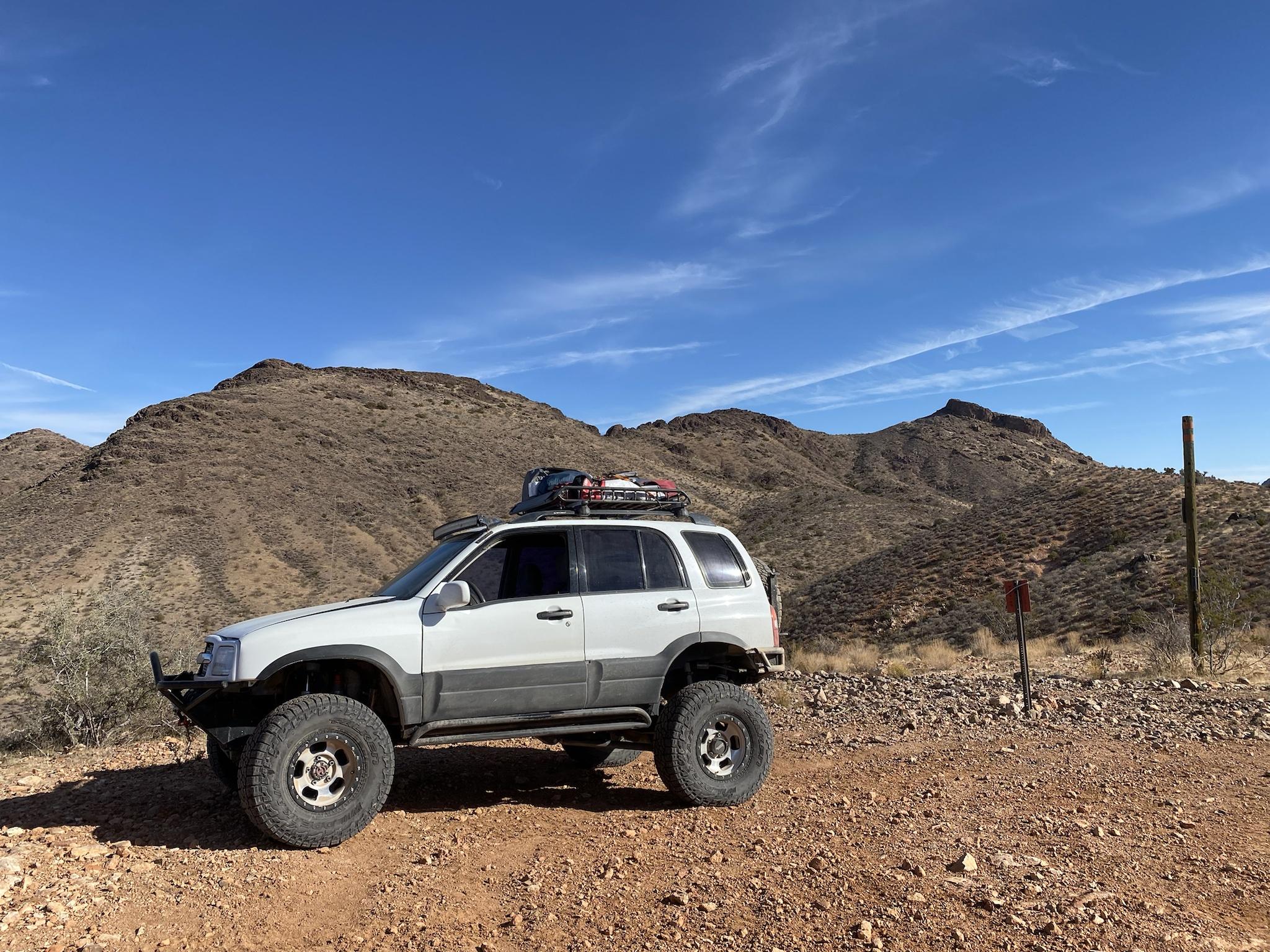 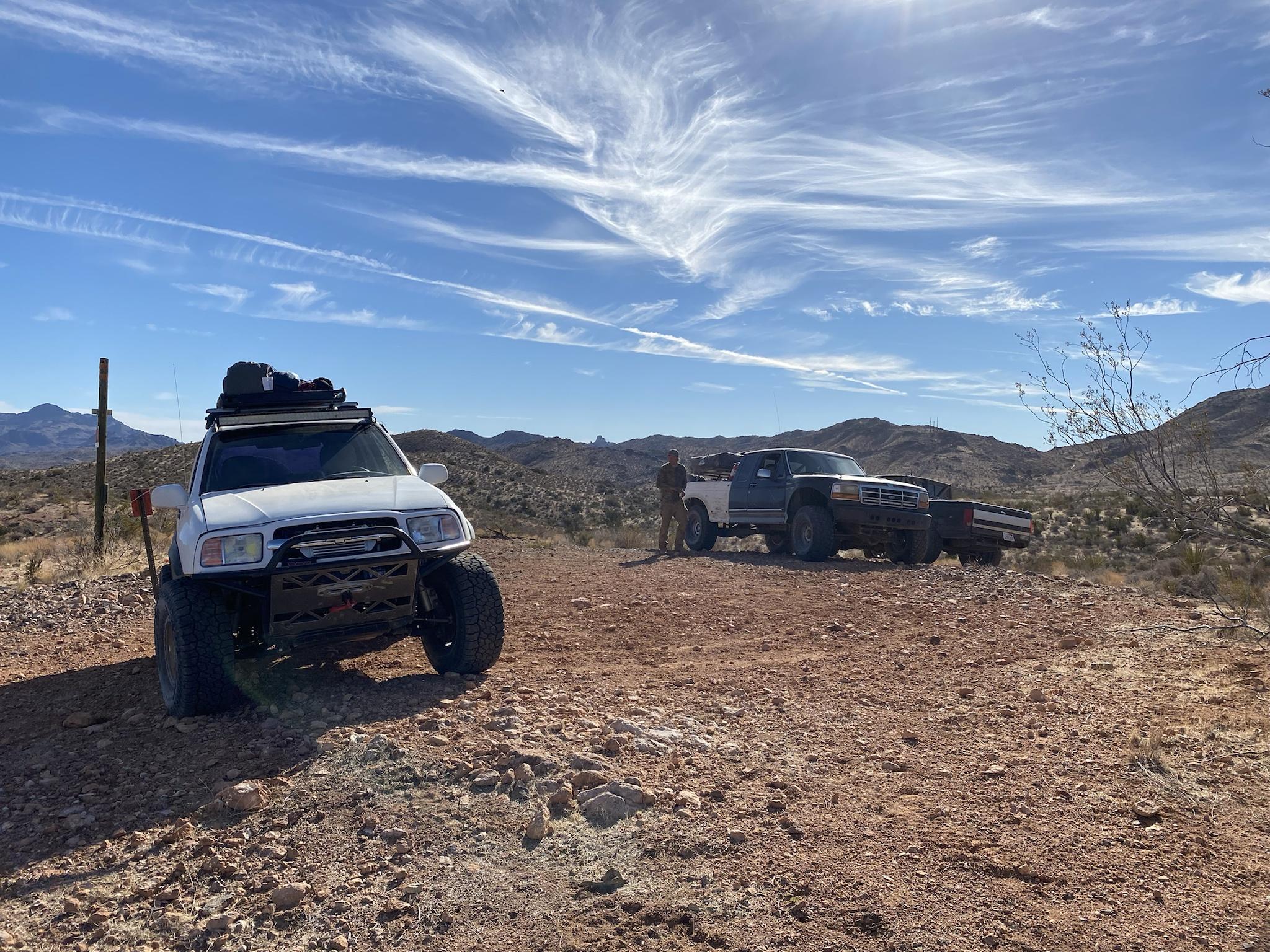 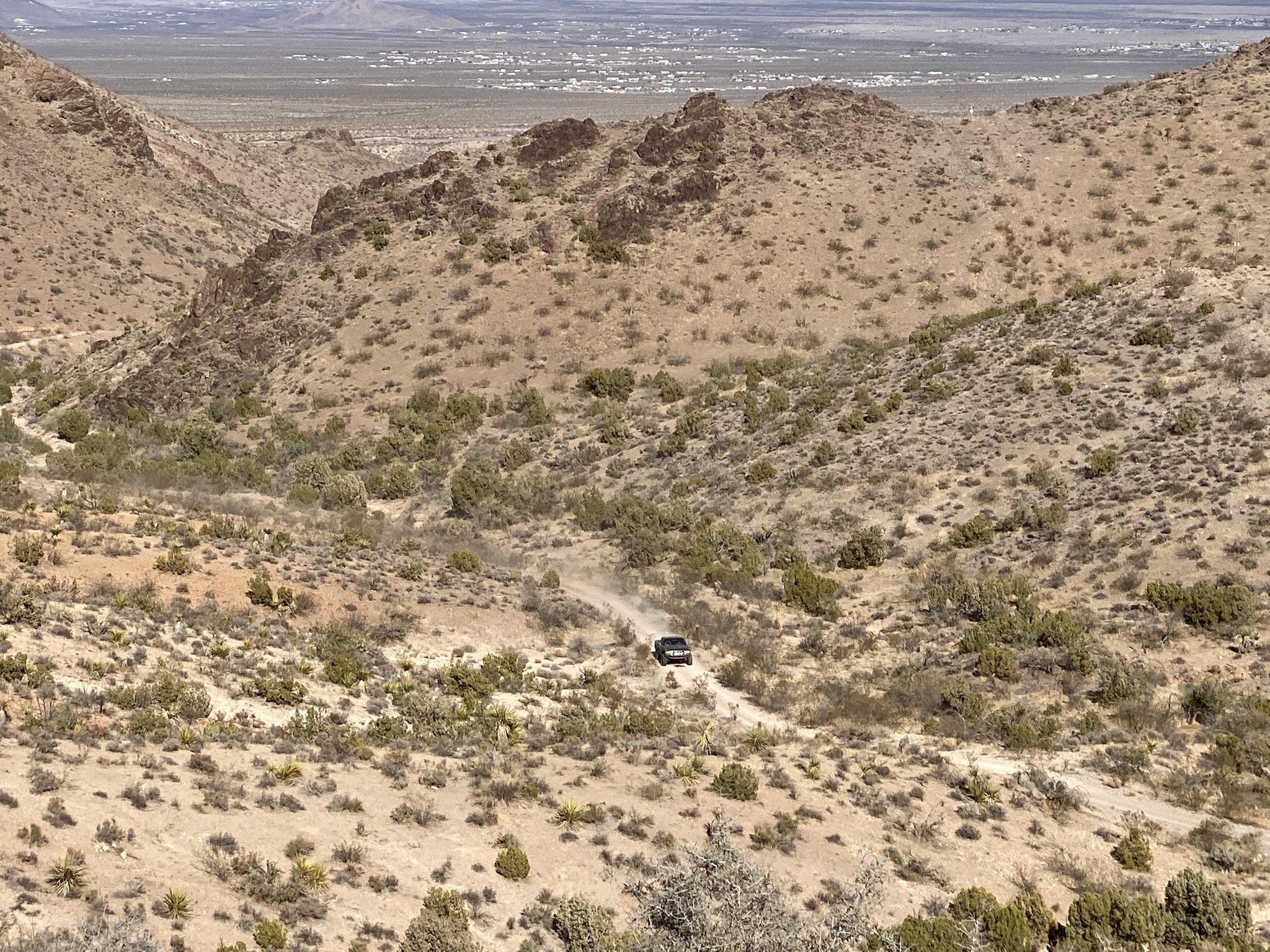 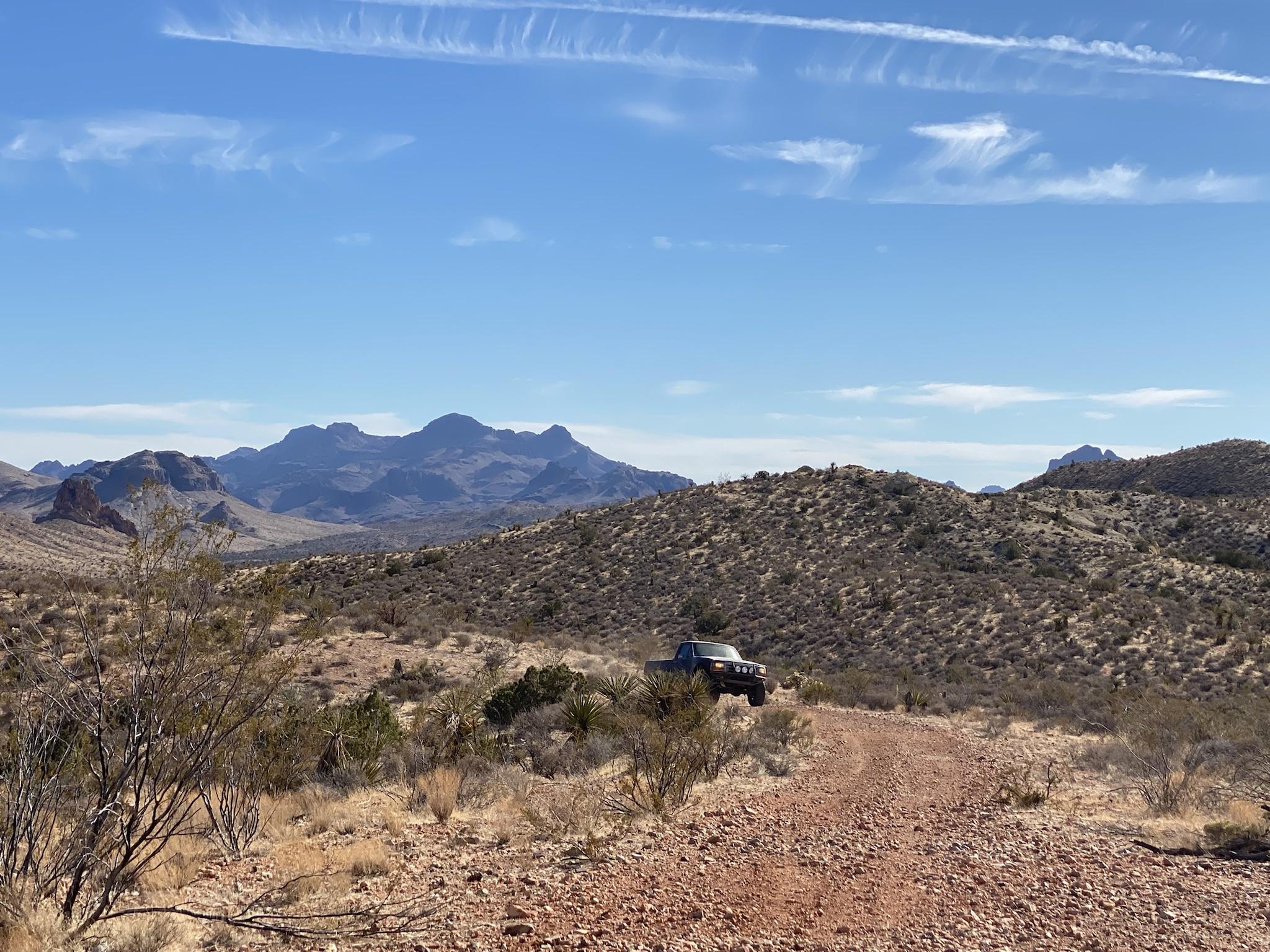 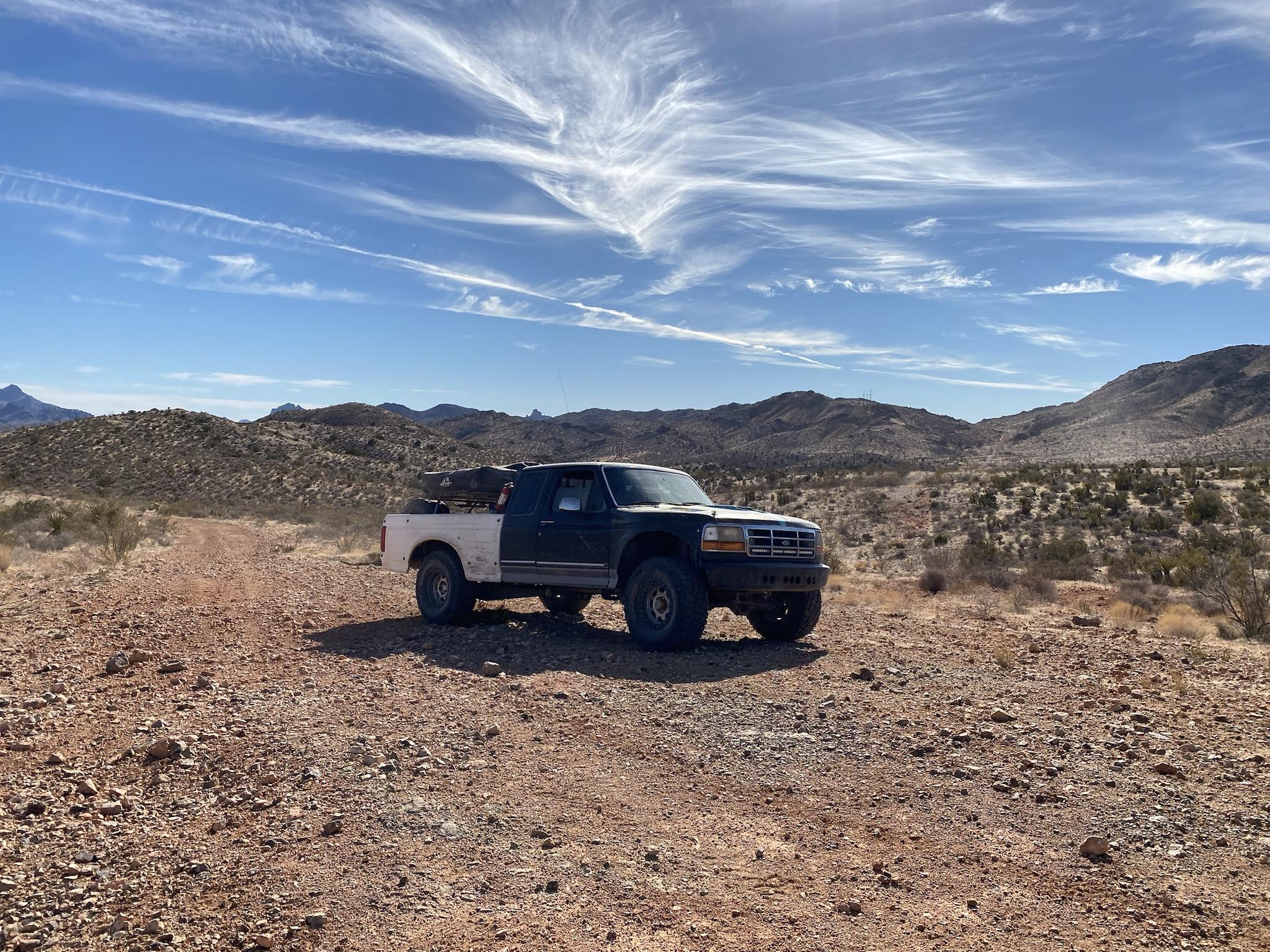 Little did i know, this was a shitty spot. Jbrapp called up that if we go a 1/2 mile more to where he is, there is a hell of a view. So we hopped back in and headed up there for liquid liberations 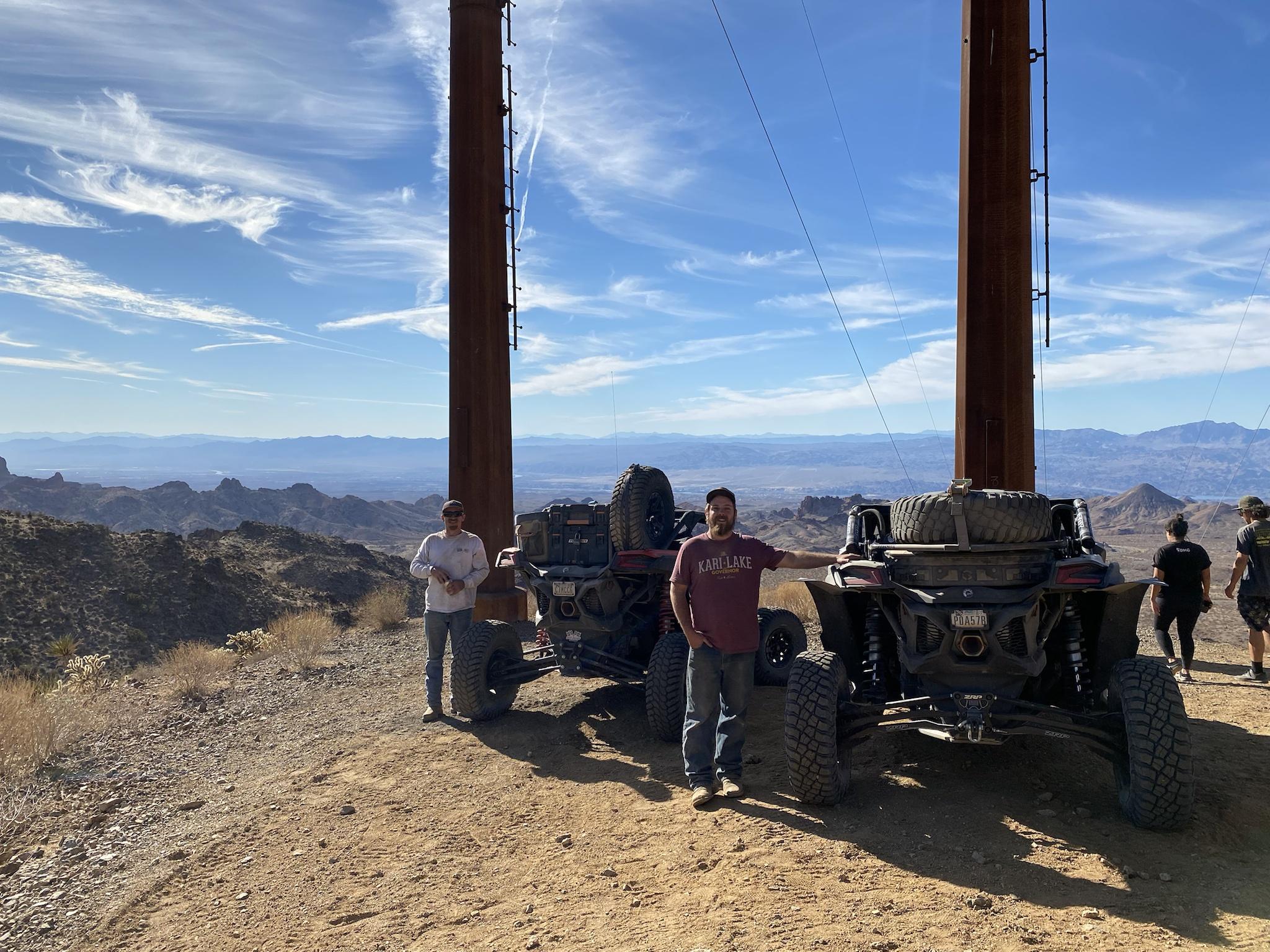 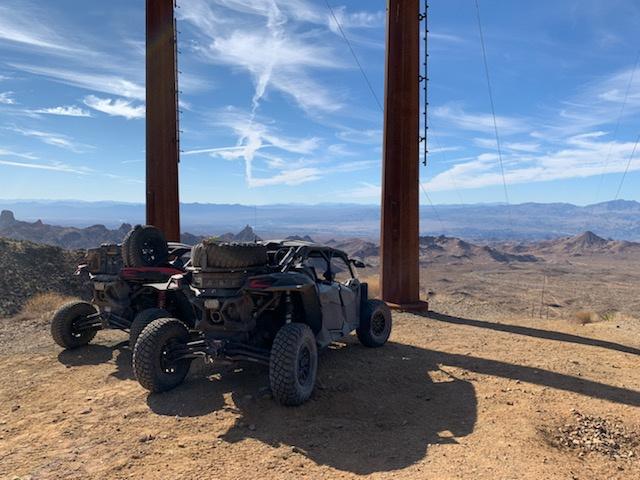 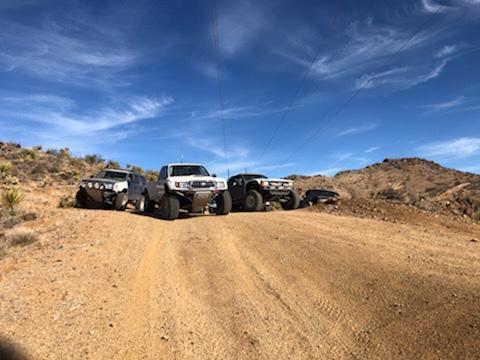 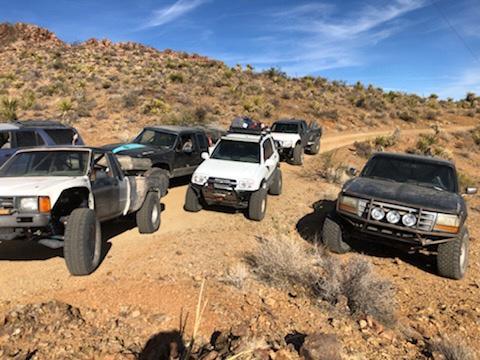 Took it all in for a bit (and more refreshments), then headed down the mountain. it was full of gayzer chop but surprisingly, thats the only chop we've hit so far. we motor down and as im winding through a wash, all of a sudden, 2 big fucking boulders pop out around a corner. i lock them up and skid to a stop just kissing one of them. fuck me, that was close. i missed another turn (common theme for me) so we get back on track and make it to bull head... but not before a jump is found in an abandoned subdivision thats all dirt. watching Motiracer and WTK launch their shit off that jump was mesmorizing. Just miles of travel dropping out and landing on big natural tittie cusions for shocks. I think Dustin in the fronco has video. they then found some "step downs" as each lot was squared off down the hill. after about 15 min of that, we hit laughlin and parked on top of the parking garage 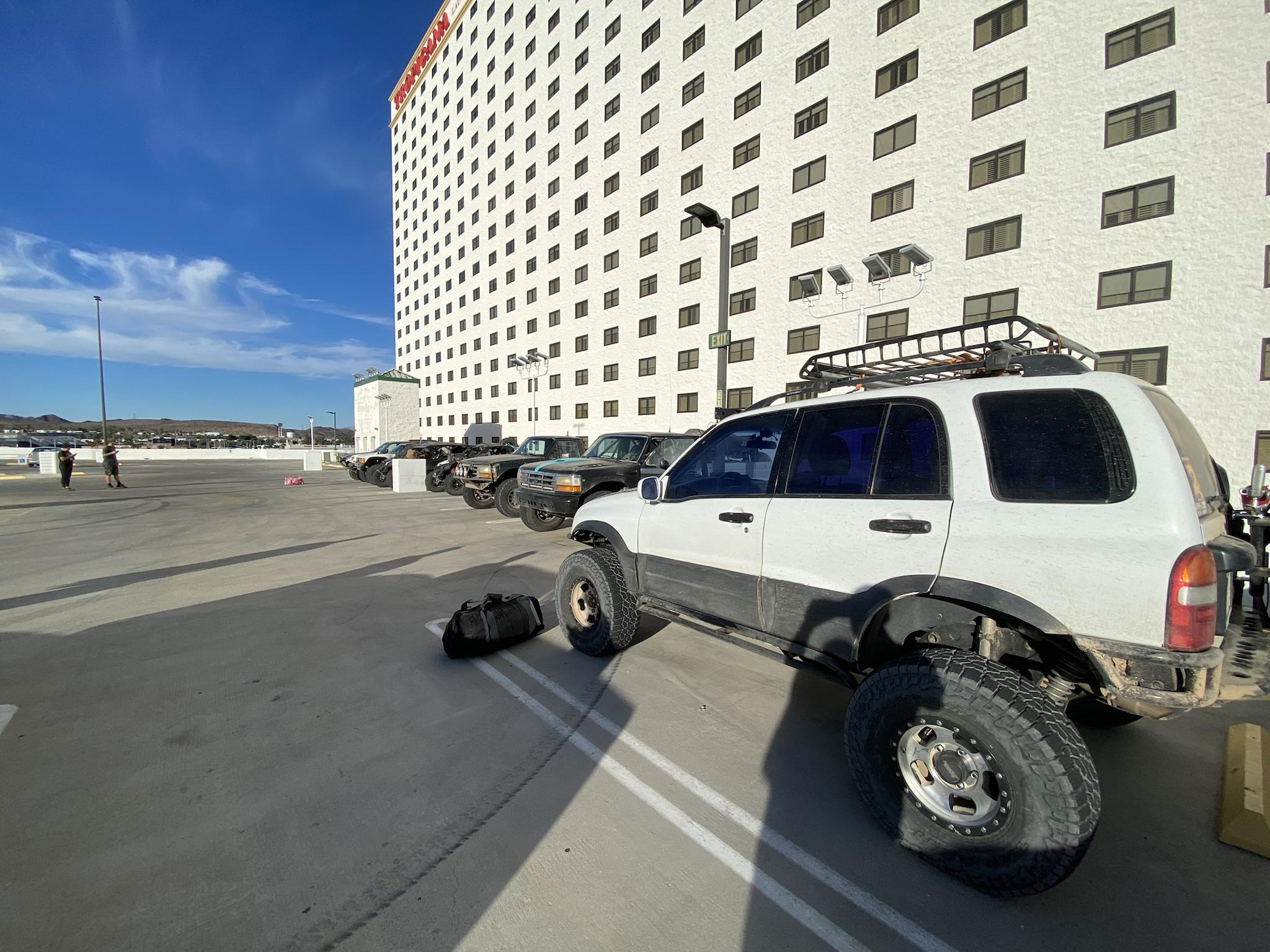 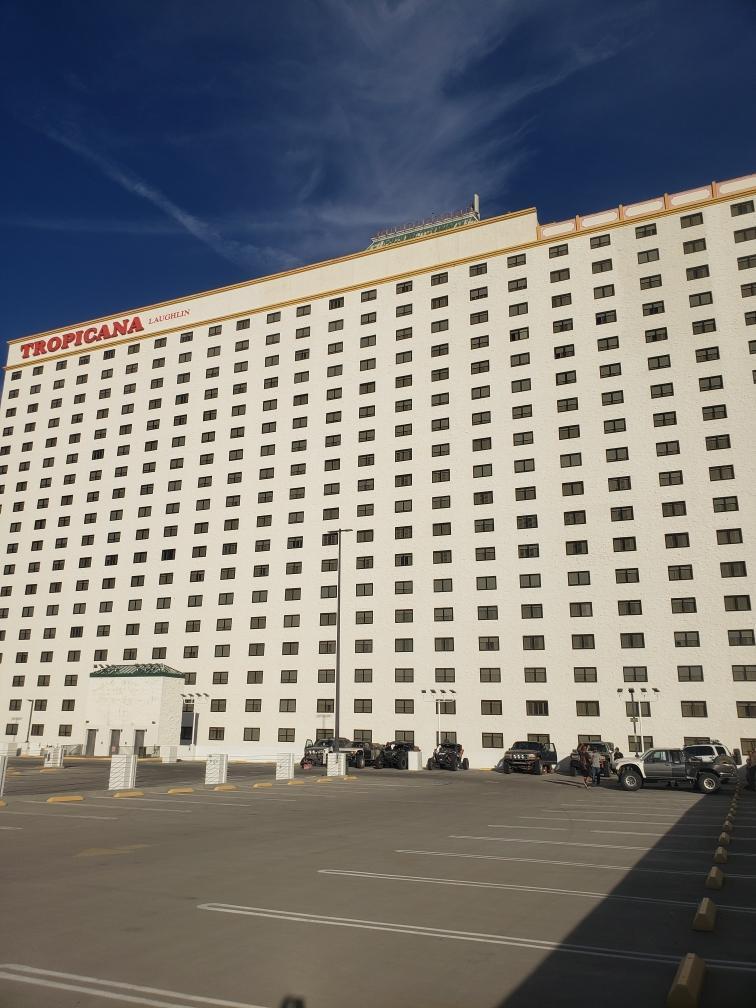 We proceeded to have celebratory beers atop the garage before going to check in, get our rooms and fucking shower. Fuuuuuuuck yeeeeeessssss. We made it there by 4:30pm and Steph setup dinner reservations at the Prime Rib Room for Turdblows b-day. After washing all the stank off, i met up with midget nate, corey and jbrapp to head down and have a few more drinks. Met Turdblow, Dose, WTK on the way down and hit bar. 5 mother fucking 75 per beer, you had to keep your fucking face mask on while SITTING at the bar and the talent in there was well... laughlin talent. We all had overly expensive beers and said fuck this, lets head back to the parking garage. WTK got done loosing at craps and we headed that way. We proceeded to smash drinks while Corey decided to see what the deal was about "no laws when drinking white claws". We hoofed it down to the Prime rib Room at 7:30 (8:00 reservation) and got to it. we all loaded the shit out of our plates and chowed down. 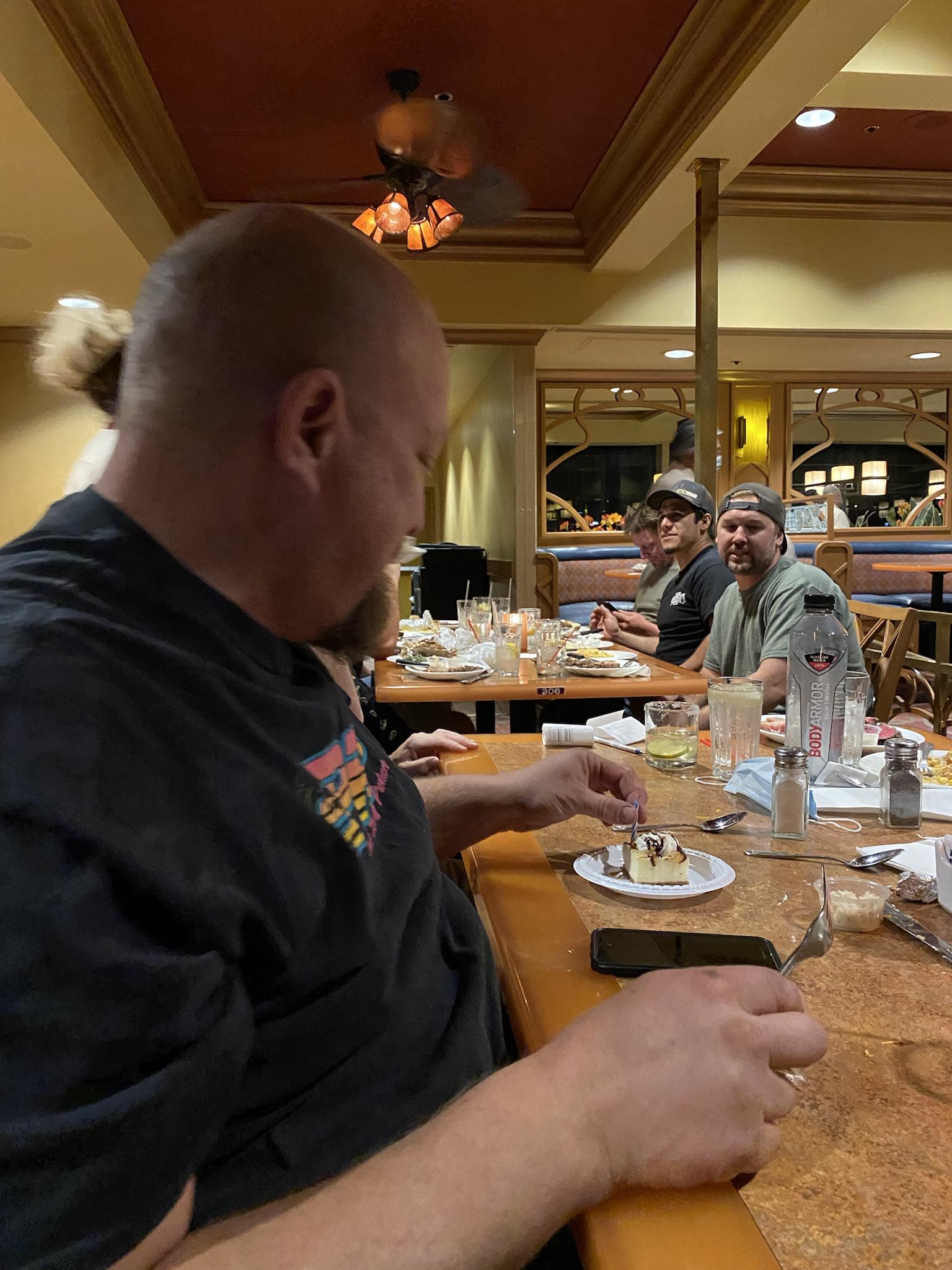 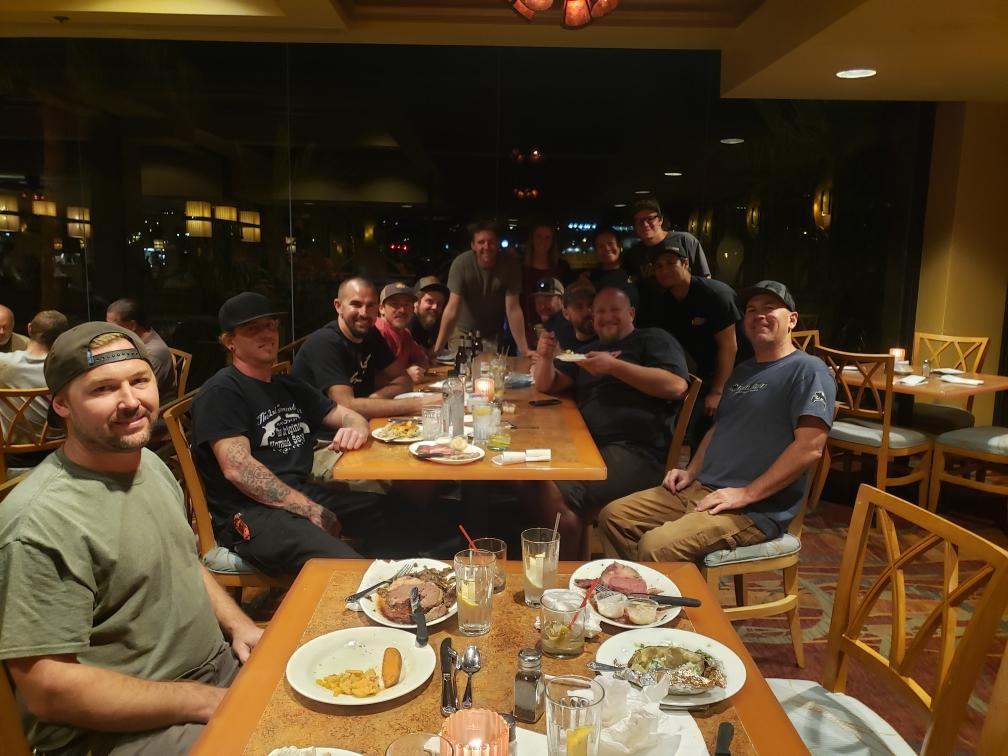 motiracer being being fancy as fuck 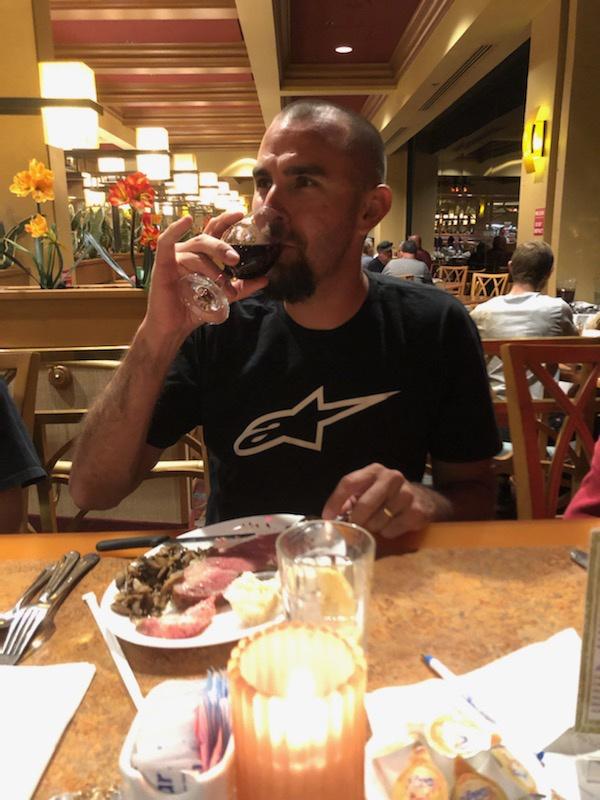 after that wine was gone, he proceeded to fill it with Jameson to bring himself back down to our white trash level.

That food hit the fucking spot but when all you have had is uncrustables, couple hot dogs (you take that as you will, if you considered it sexual, i hope you have a raging hard on), some chips and beer, is gunna be fucking bomb.

we walked our happy asses back to the parking garage to continue drinking BUT not without first stopping at the terribles station to grab some walking beers. Turdblow of course grabs 2 fosters but is so excited by the cheap price at the counter, he has the gal hold his order, runs back and grabs 2 more lmao! i settled for a 24oz Coor heavy myself. On the garage, Corey has just about slammed all the claws. Steph has now realized that her gaydar is going off hardcore. If yall dont know, women have a pretty fucking good gaydar to spot out queers. So of course, WTK has to just fucking LAY into him about that and even Shannon took some jabs! At one point, i was just fucking crying from laughing so hard! god damn that shit was fucking hilarious! Best part is, everyone took it in stride and just had a great fucking time. I think i took off back to the room around 11:30, not sure as i was pretty smashed and tired. We had planned to leave Saturday morning around 8:00am to start our treck back to phx and i wasnt staying up till dawn. 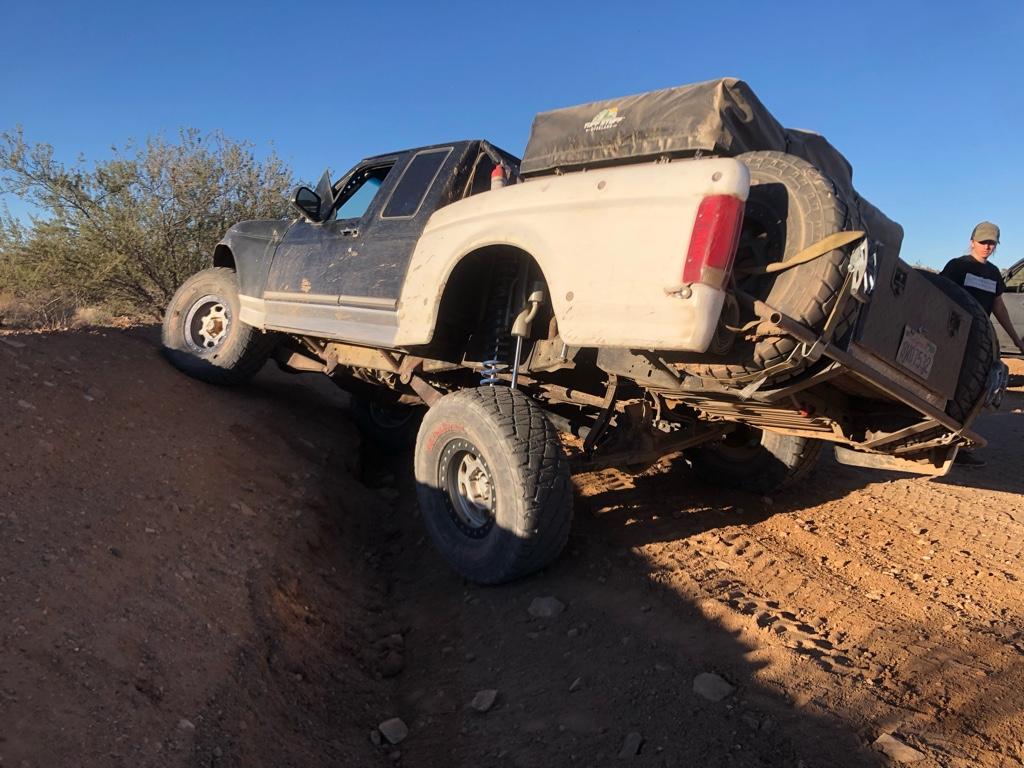 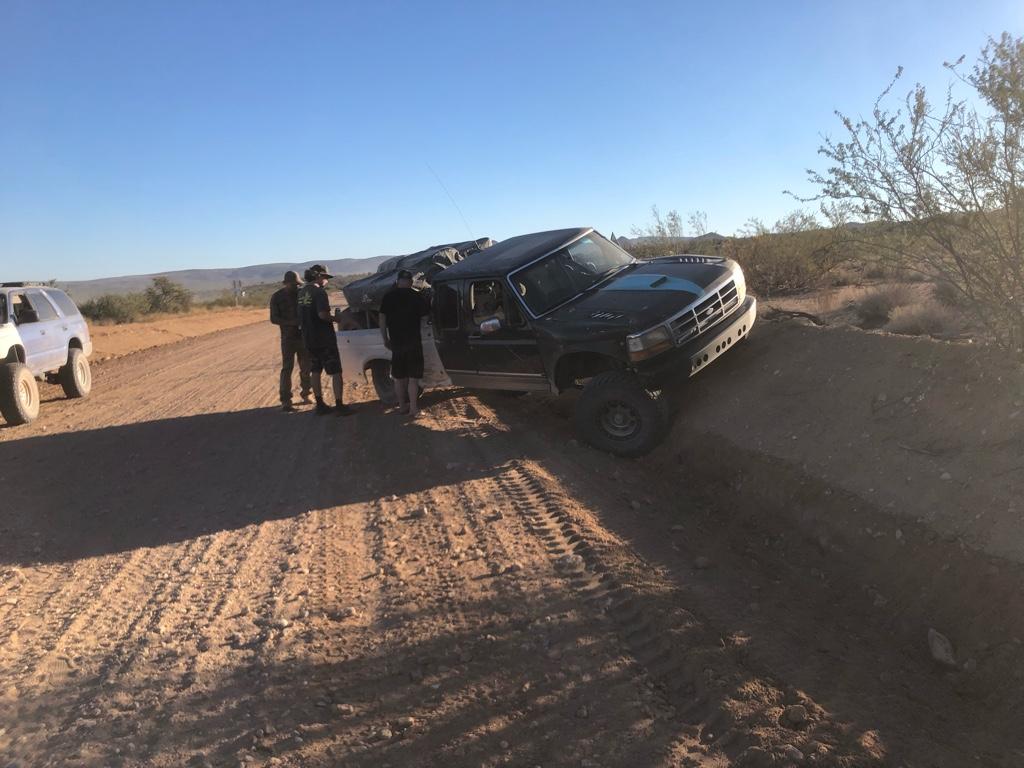 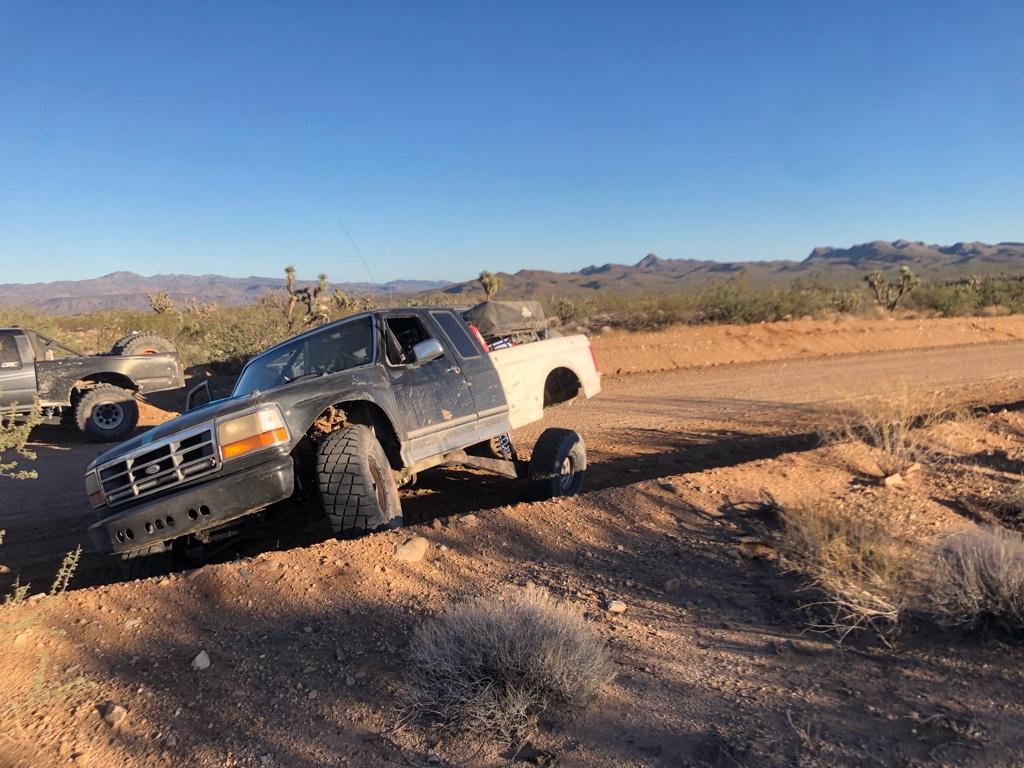