Yea... I like building them to custom length since I buy the rebuildable fittings. If i keep them short and bring a little spare line.. i should be able to trail fix. 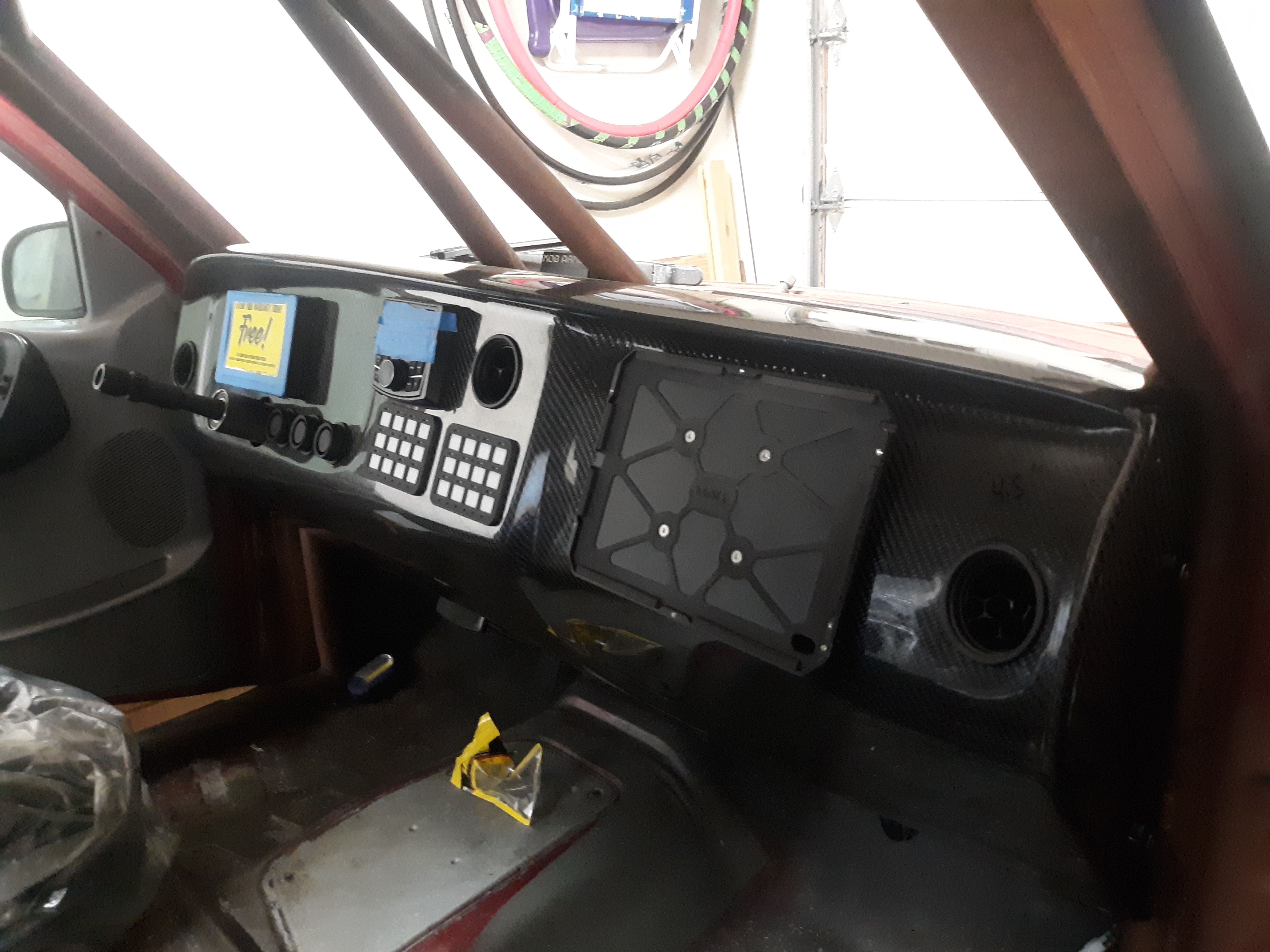 This may be the cleanest Prerunner dash I have ever seen.

(Gone are the days of autometer filled dashes with toggle switches and individual breakers)
Reactions: A.J.

mikey09120 said:
This may be the cleanest Prerunner dash I have ever seen.

(Gone are the days of autometer filled dashes with toggle switches and individual breakers)
Click to expand...

Thanks! And Right!? ... imagine 24x switches/breakers

and however many gauges that are packed in that digital dash.


the bodj said:
No kidding. Looks killer
Click to expand...

Thanks! turned out better than I thought too. lol

maxwell279 said:
This thing is turning out way to clean for ghetto Dad Double A Ron

If only my babies diapers were this clean. haha
Reactions: maxwell279 and mikey09120

I have the same GPS antenna but mine has always been held onto my dash with double sides sticky velcro. Gonna do the mount a little nicer on this truck.
Last edited: May 19, 2021

^ yea no way I could do sticky velcro. I hate my stereo remote that is like that in 2ghetto. Never stays on like it should.

I permanently mounted the mob armor GPS where it was at. Kinda started checking out the Holley terminator x harness, etc.
Realized that the Ebay injector harness somehow has a different "key" in the metripack 150 connector than what holley provides (black connector vs holley grayish color)... That meant I had to remove all those pins in both to swap over the connector ends. Best part of that...My little key kit is over at Justin's... so, I was using a safety pin. Derp! Also realized at this point... that I am gonna have to de-pin a bunch more shit in order to get it through the firewall!! There are some big ass connectors... and I want this cab sealed as possible.

So, not wanting to deal with that crap during the day time, I bounced back to the rear end.
Welded up the S-2 ultra flush mounts. 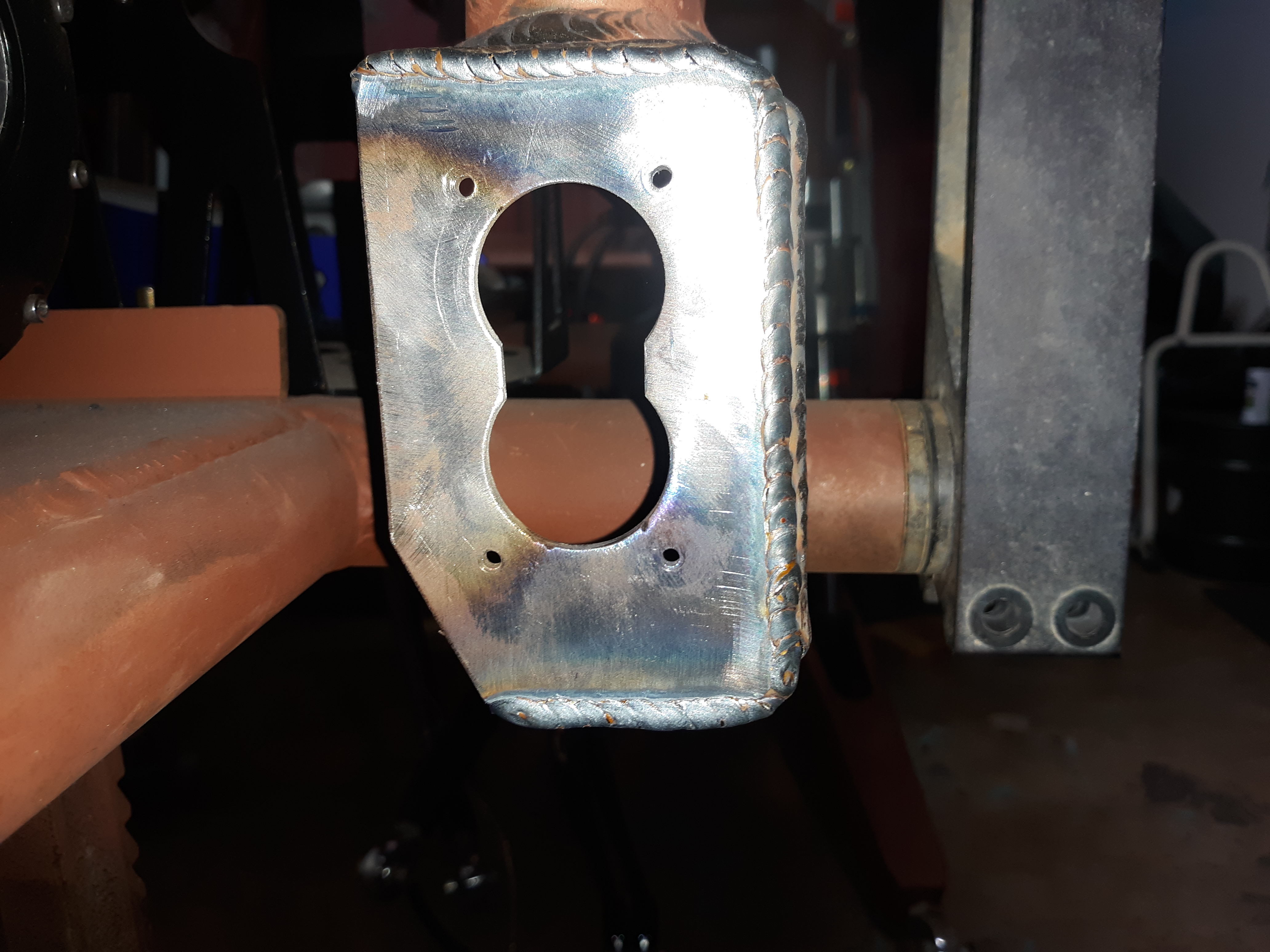 Tried to match weld directions in the cramped space on top... and tried to do a kind of push weld on top of driver side travelling left. Yea, probably shouldn't have done that... def not as good doing that! And back on the rear brakes. Goal here was to get the rear end completed. And to get that done, I had to drag it out and bench weld on the sway bar mounts and brake line tabs.... so I could paint it. PS. That axle is heavy to lift out from under a truck and manuever through some fucked door positioning to get outside by yourself! While two 13 yr old kids watch and say "why are you sooo sweaty" LOL. Feel it a little in lower back today. 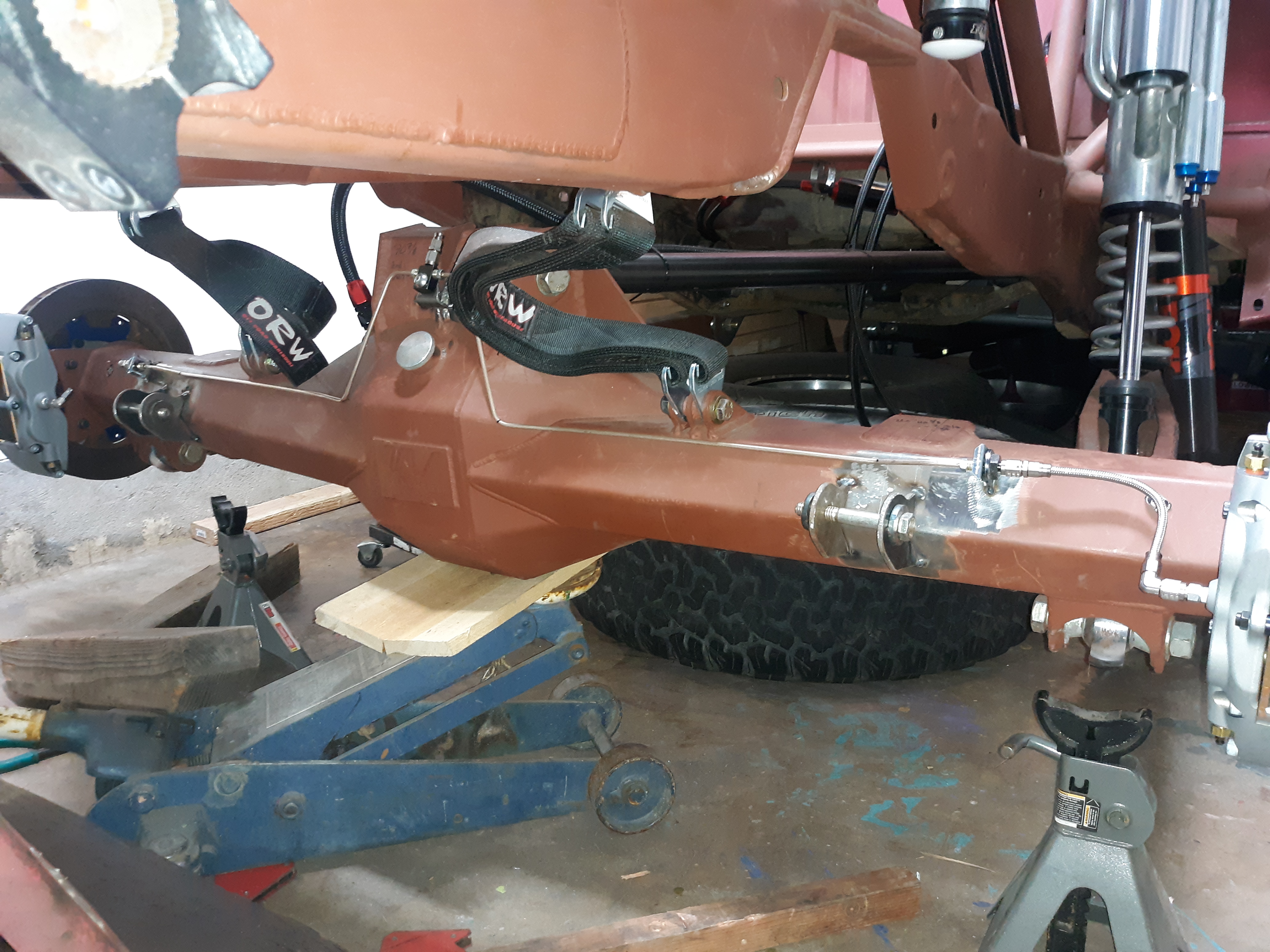 Done to the upper link for now. Need to figure out how to plumb in hoon handle...

Some hotNfresh weldz. So hot, that one burned me through my glove. (on a circle overlay, somehow got my left middle finger too close to arc/molten metal... and the heat burned me through my glove.) Didn't burn glove either. Weird. But, I do have a nice blister today. Man, do I sound like a big ass whiner today or what!? "Poor wittle guy got all beat up by his twuck." hahahah 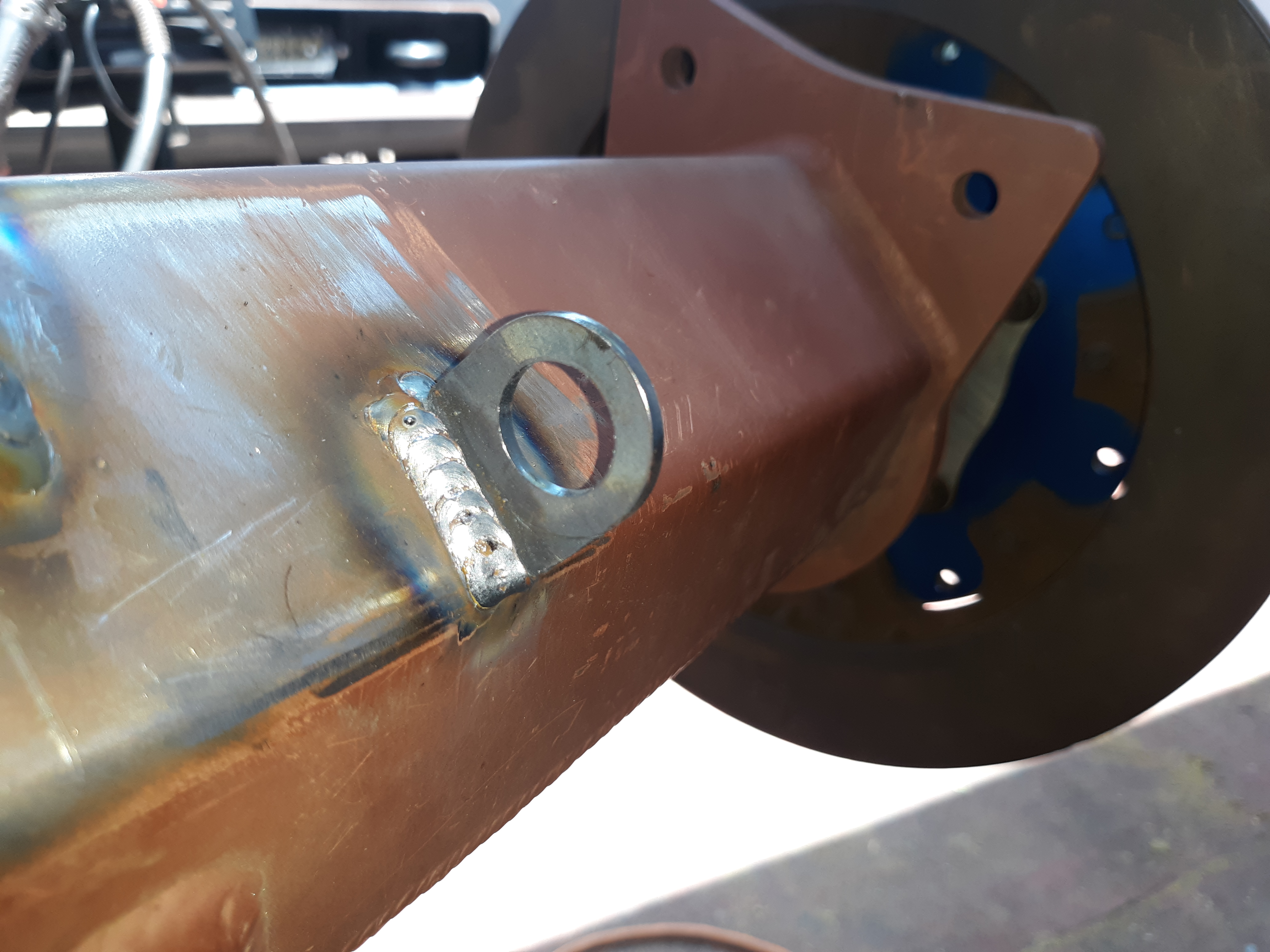 And half way painted up. Gonna finish up the rest in a minute. 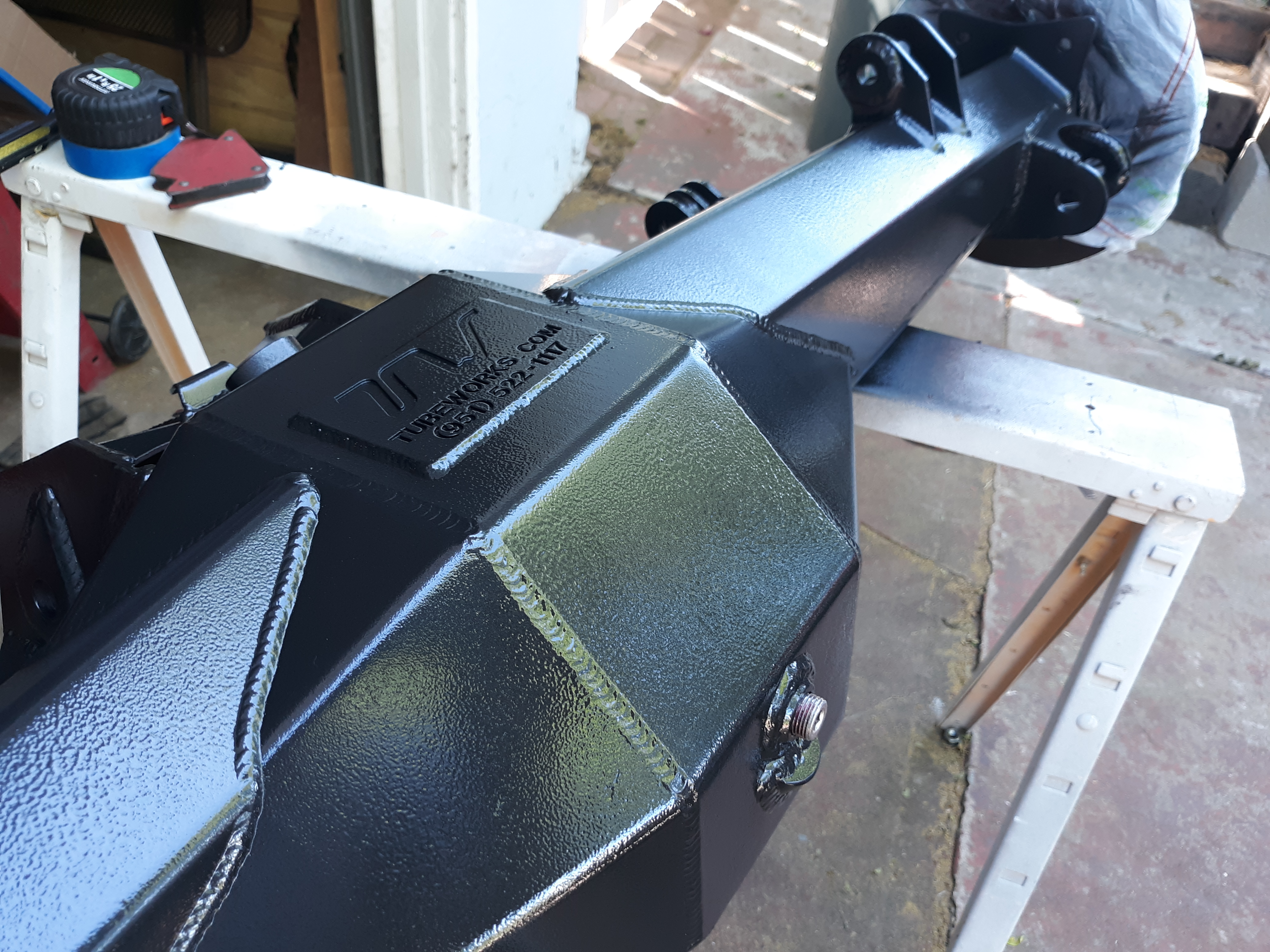 And then next up will be to complete and paint the links ... as well as start figuring out placement for all the ECU, A/C control box, etc.. in the evenings when I sneak in an hour at 9-10pm.
Last edited: Jun 1, 2021
Reactions: Turboyota, PSDirtracer, Jester9 and 6 others

Finally got my sway bar arms. (Don't ask how long ago I ordered them. lol)

For anyone taking fine notes. This has a different design on the machining than the others. Only 2 pockets instead of 3... and they are not slanted. OK finally getting more worried about things that I probably should have researched before. 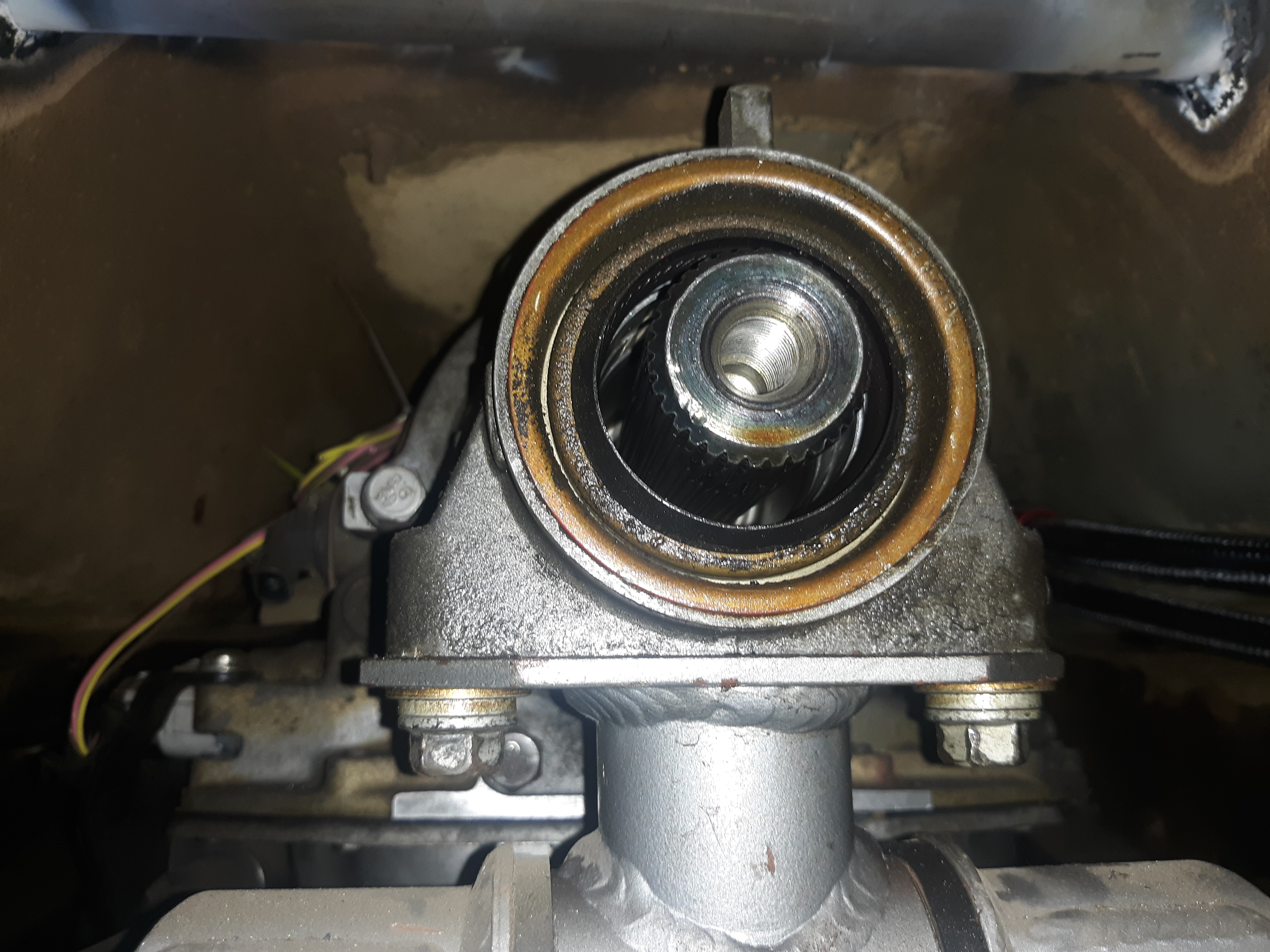 So... Looking at my trans. I think I have a 2WD 4l80e with a slip style output shaft for a slip yoke. You can see the splines go all the way: Is there a yoke that can still bolt to this? It would have to secure to the end of output shaft... because it appears the splines go all the way to the bearing on trans. Normally for the factory fixed yoke, the splines stop, and this is what the yoke bottoms out on.

Or, am I fucked... and if I want to run a fixed yoke... I will need to swap out the output shaft. (entire rebuild of trans)

The reason I think I need a fixed yoke is because I plan to use a 2 piece driveline. And feel that it has to be fixed in order to not flop all around from carrier bearing, right? Feel like I'm fucked.

Unless I am missing something, you should be able to run a slip yoke on the trans side from the trans to the carrier bearing. That is how the stock 2wd tundra driveshaft is setup.