partybarge_pilot said:
Have Jesse roll a bead on the tube for hose retention.

Brakes. Drive it around a little then try bleeding it agian. It takes a while to get all the bubbles out of a new system sometimes. If you have a lot of high spots, it can be damn near impossible.
Click to expand...

I plan to ask them to do that. I didn't leave a ton of room, but I think it should work. Tight fit there. Guy I talked to was Harry. I guess he is one building that D44 Toyota? An extended family member, KellyR, knows them. I guess he has known them all for years and grew up with them. Hell, you might even know Kelly. Not many dudes names Kelly out there. haha

And yea on the brakes, we got more out of it by letting it settle for a day. If you check out the spots coming out of the hoon handle master, you will see they are suspect. Total high spots that do a 180 back down!! Gret place to trap some air...

Get a vacuum bleeder and make quick work of it,

I know Kelly. He was in their group in high school went they started going to Ocotillio with us.

How are you bleeding the brakes?

Pump up with pedal only and repeat the process till you get all the air out.

I do this on my sand car with cutting brakes. Works awesome. Use to get a squishy pedal or soft cutting brake till I bled them this way.
Reactions: Turboyota, SoupGFX and mikey09120

that was also a variation i tried when bleeding. just gonna leave it for now. See how they work and then worry about it. Right now it's back to trying to get this thing to point where I can get it running.

So, tried to torque the balancer/crank pulley on. I read it was 37lb ft... then get it to go 140* further of bolt rotation. Well, I got it to like 100*.... and then my tool broke. Gonna have to assume it is tight enough. Had a huge cheater and swear shit was bout to blow up.... then I heard the cracking sound. lol Got the rock screen installed. And did lots of mechanic work you don't see... got all the fuel fittings tightened up, and intake mounted, and injectors plugged in. Then I could throw on the exhaust. Which made me realize... shit, have to move the fire extinguishers up! They would have been getting blasted a little by exhaust... and dont want to be reaching around hot exhaust too. So, those got moved up some.

Need to get the vent line figured out on cell and it will be ready to be fueled. Got my fittings in yesterday afternoon... and quickly installed the Inverted flare to AN 6 adapters into the steering box... and then made some power steering lines. Hope they don't leak... although, I suppose it's not like they are any more important than the brake lines I made. LOL

The high pressure one was kind of a pain to get clocked right and tight. (Hose spins when you get tight.) Of course this is one I had to back off and re-clock a little. So, we'll see if it works. 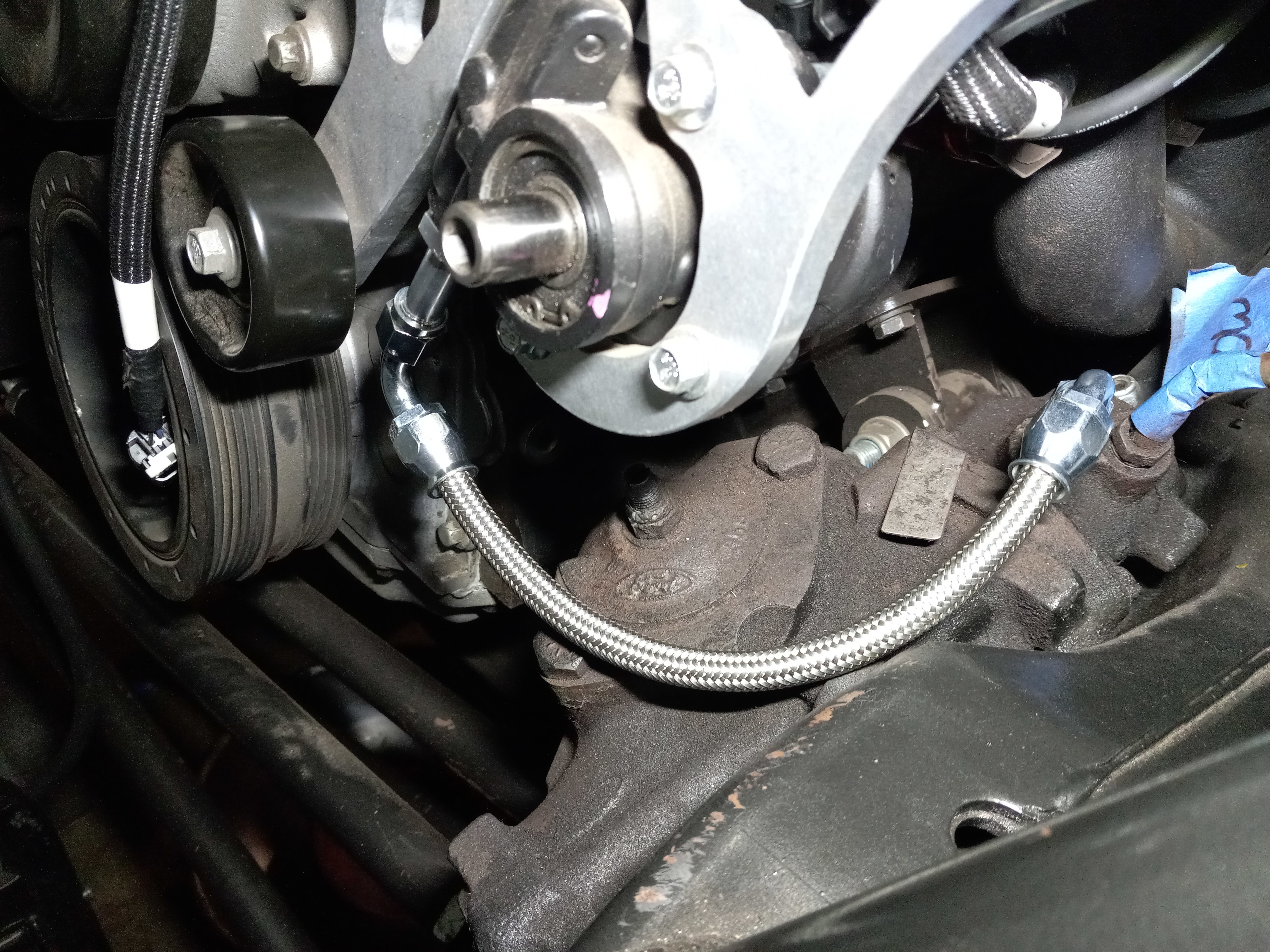 Low pressure return. Not as likely to leak. Just ran to lunch and got 5/8" for the barbed suction line. Not my favorite route... but couldn't come up with anything else that would work. Really wish I could hide it better. I guess I did a shitty job of documenting my steering plumbing. I have the same hose with a 90 fitting on either side. The hose assembly instructions say you're allowed to loosen it by some amount of degrees and not affect the seal so you should be fine. I forget what the amount it says but it's a decent amount.

Well that's good to know. I poured a quart in there.

I assume it should be above that return line fitting?

FasterNU said:
Well that's good to know. I poured a quart in there.

I assume it should be above that return line fitting?
Click to expand...

I normally go about a half inch or 3/4" over the return after then systems bled to ensure it doesn't drop below the return. If the fluid is lower then the return the force of the return fluid coming into the reservoir creates a ton of aeration in the reservoir. But that's just me guestimating seemed to work on my truck.

so i see a lot of people running their exhaust like what you have done.