marcytech said:
my day job is working in solidworks and other cad software, so no.
Click to expand...

I know Jason personally and have nothing bad to say, similar experience to Marcy. I know he's rubbed some people the wrong way but i don't know details. But like i said, personally he's always been great to deal with. Ive got some files from him for my bronco, haven't gotten them cut yet, but the files look great. One was missing a WPO, hit him up and he emailed it over within 30 minutes. One thing is DIY Offload is a marketplace, he doesn't design all the stuff on the website. But currently most are his since its still pretty new.

Pro-Am misalignments or nothing. Not worth dealing with the other shit.

Turboyota said:
Looks like you are using the not-so-high misalignment spacers from ruffstuff.

I hate ruffstuff misaligns with a hot hot hate. Loose fitment in the ball, low misalignment, terrible clearance with respect to the cups that ruffstuff sells(!), and super-soft material that dents and scratches easily.

If those aren’t muffstuff misaligns, please disregard that unsolicited rant.

Truck is progressing nicely! I always enjoy your detailed photos and write-ups!
Click to expand...

Yea, I have a feeling they are muff stuff. I haven't had as much bad luck as others... I popped one from over torquing years ago. Others have seemed to work OK for me. Although, I just tried to use my old heims that the spacers got stuck in... Bolt won't go through. Figured out why. Spacers are mushroomed inside. Opps, prolly over torqued those too.. or they are just shit.

These came with all my kits I got ... so this is what I will run. I ain't buying new shit unless necessary. None of my bolts I got are going to be shanked either on suspension pivots. OH NOSE!

I noticed something peculiar about my front lower pivot boxes a few weeks ago. Threat sent the same high misalign spacers... and only 2-5/8" spread up there too. At first I thought this would be a goof up.. as I have always seen a 3" spacer width up front, and straight. But, I confirmed my brackets are also 2-5/8". To be honest... I'm a little worried they may not allow enough spread at the back of links at housing!!


As for the GMR / DIY offroad stuff. BroDaddy truck has a full float GMR housing. The whole set up leaked at first.. out the drivelplate/ hub/axle seal. The issue was that the axles were like 1/32" too long and wouldn't let the oring seals fully seat on the Schreiner caps. After fixing that.. it has been great. So, can't complain there.

He gave great customer service for the DIY stuff. The files were like $9 for the link pockets. I spent like $20 or $30 and got a bunch more files. Hard to beat IMO. I'm a happy customer in that regard. I think what he is doing is/was a great business idea.

Thanks for DIY Offroad opinion.

Finally got back to working on this thing....

Welded up the underlay tabs for lower link pockets.... 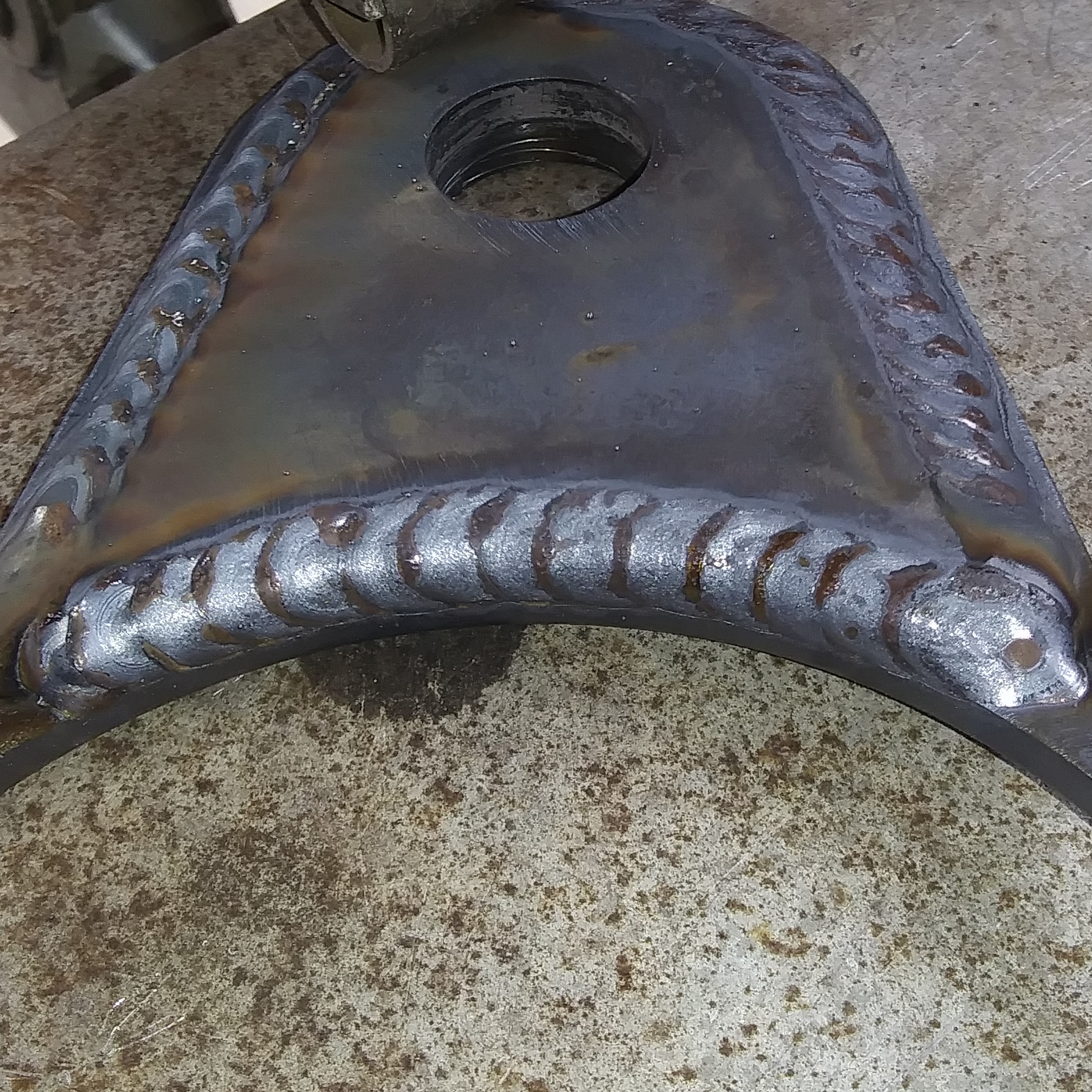 Tacked the pockets on. I set the angle of the tab so the plate is at 0* to the housing face. This appears to rotate the tabs about 15* forward from centerline. Seems to be right around where previous guy had his too. But he was narrower. I put them about 48.5" apart.

Time to stick it up in there. Wheelbase looks to be right at 125" at full bump. 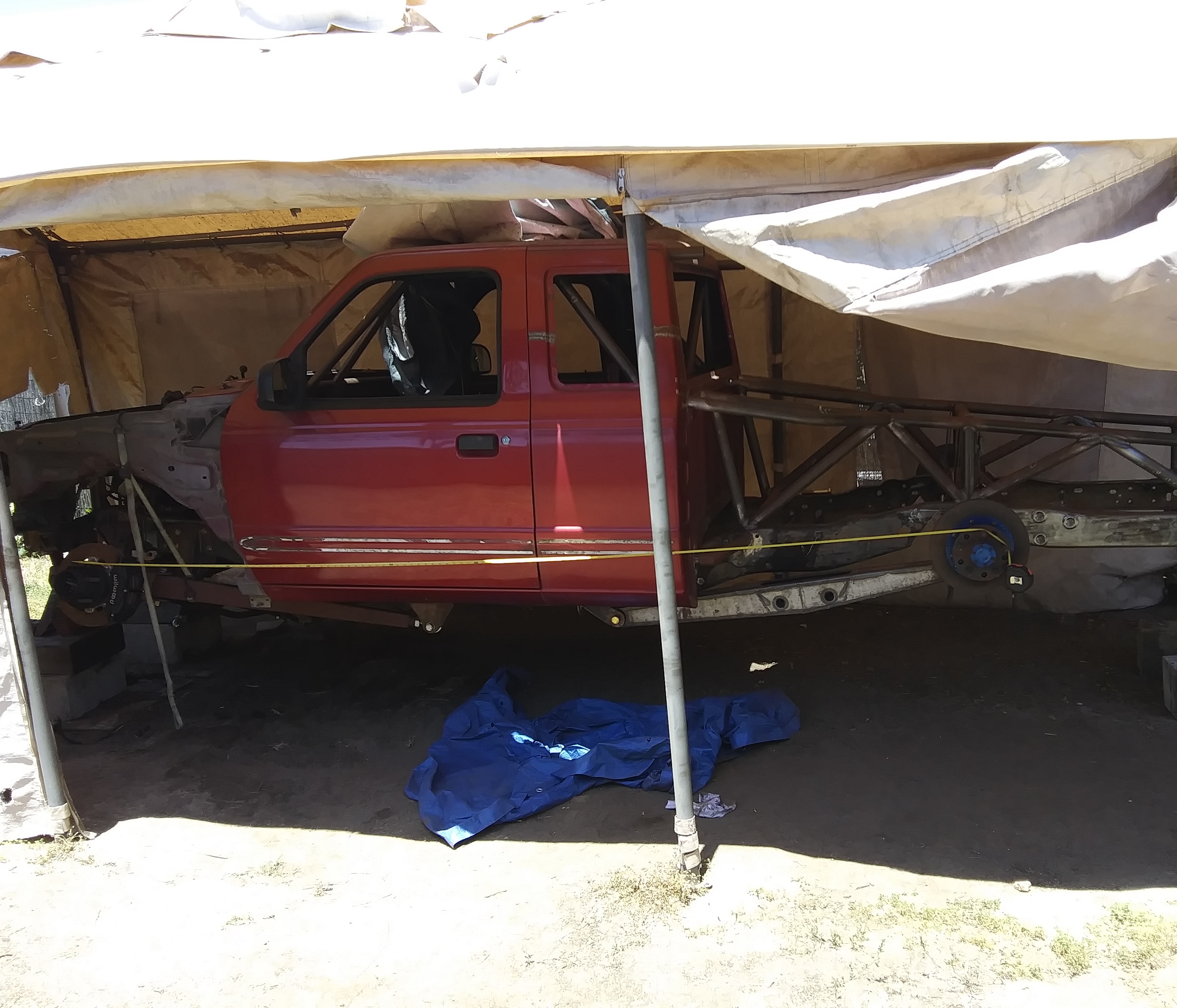 Add a shock for motivational purposes. Damnit, these Fox's are long. These are my front 14" shocks. The real 16" ones are gonna be popping up higher than I want. Looks like it might be a tight squeeze with coil over on full droop too. Rhut rho, hope I don't have to cut any tubes out. 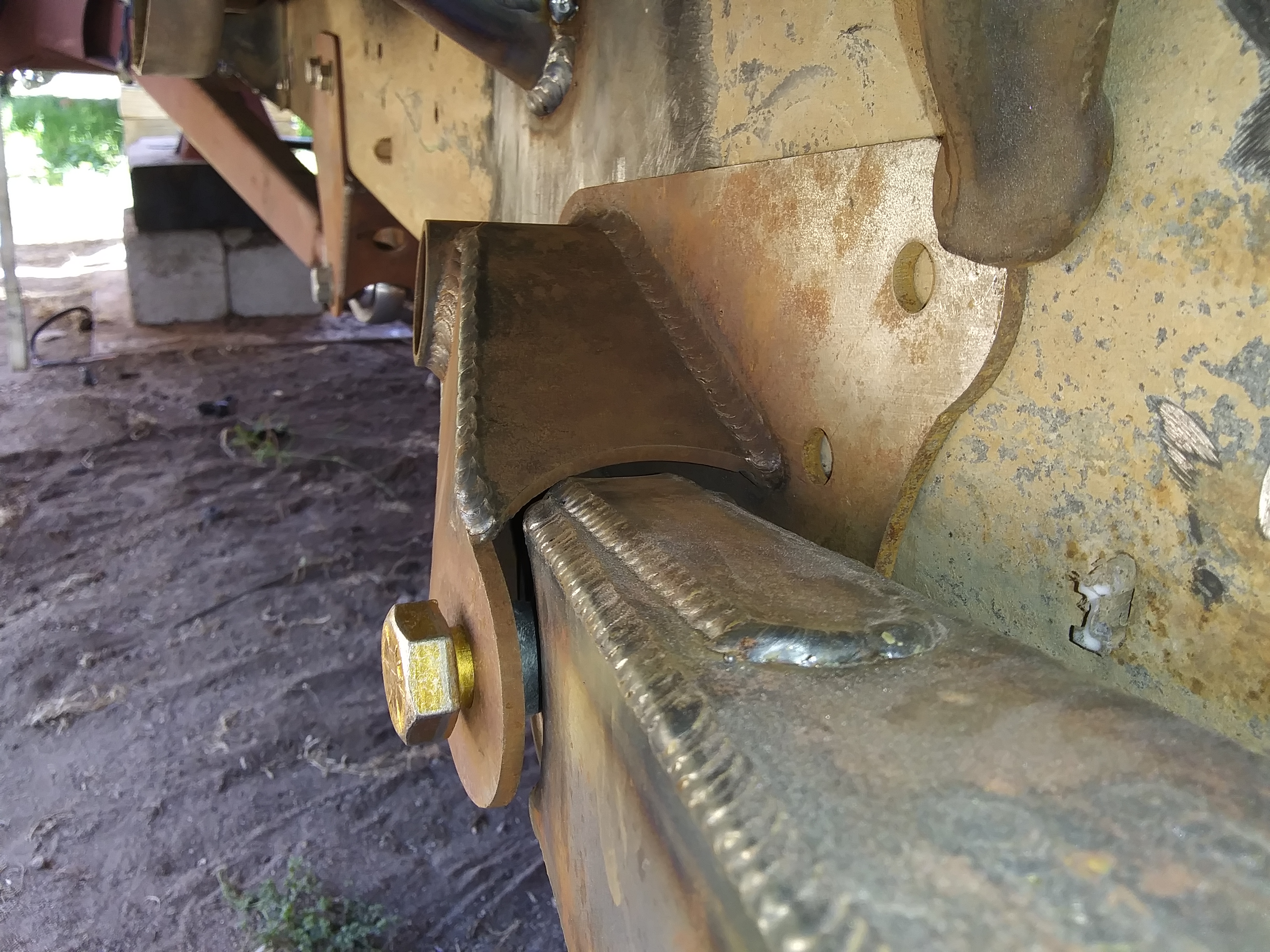 Ah, fuck it for now. Go make a couple tubes instead.... 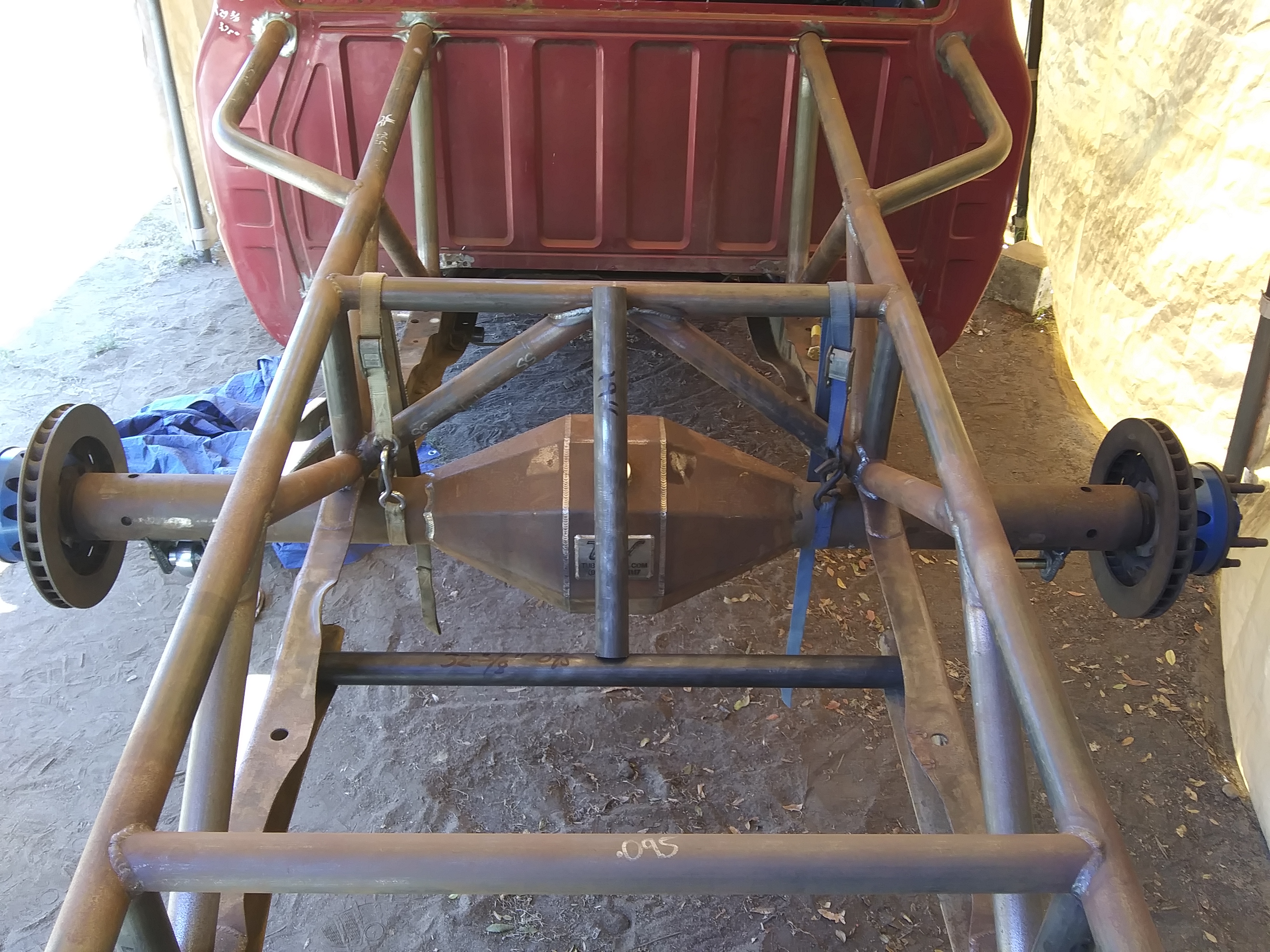 Eh that link mount isn't a problem. Unbolt the trailing arm, spend a few minutes with a carbide burr on a die grinder and you're good to go. Those things have changed my life.

Also, this tool is magic.

It'll work perfect to leave a nice finish after the carbide burr, and works great for grinding in tight to reach places before welding.
Reactions: partybarge_pilot

the bodj said:
Eh that link mount isn't a problem. Unbolt the trailing arm, spend a few minutes with a carbide burr on a die grinder and you're good to go. Those things have changed my life.

Also, this tool is magic.

It'll work perfect to leave a nice finish after the carbide burr, and works great for grinding in tight to reach places before welding.
Click to expand...

Does that one chuck belts off all the damn time like the air version?

smokeysevin said:
Does that one chuck belts off all the damn time like the air version?

Nope. There's a knob so you can adjust the angle of the file to keep the belt tracking straight.
Reactions: smokeysevin

I went ahead and did what I could to get some more vertical spread on the front upper link mounts... 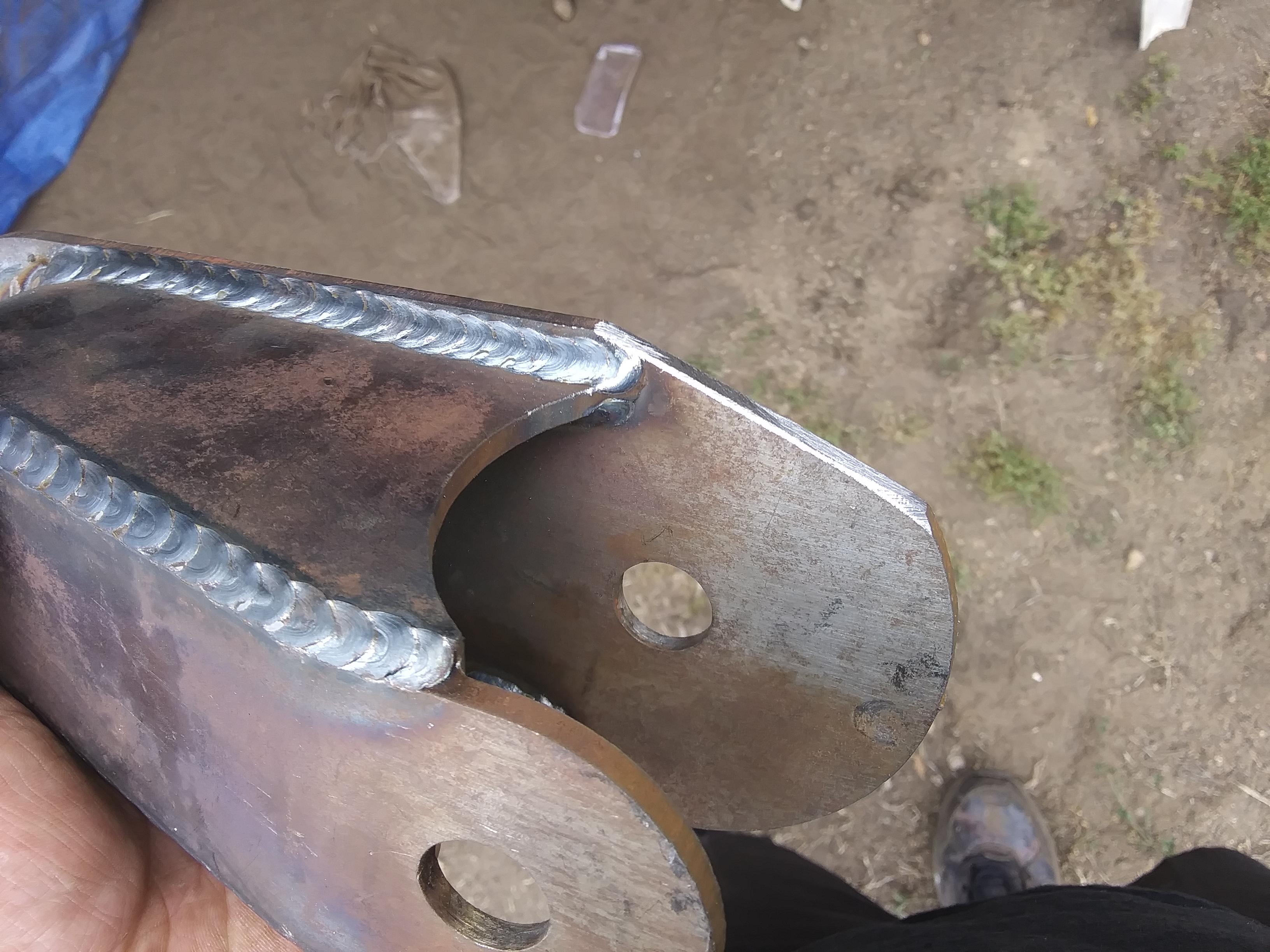 I knew it wouldn't be much, but I thought it would be more. Maybe like 3/8" on a brenthel tape measure? LOL. Still going for it. You can see the dots below. Lower one was from OG placement all the way up. Higher punch dot is from after trim job.

Can't really get any higher than that unless I really hack the bracket... PS. Heim was actually hitting the bent roll/lip on that cross member on pass side. Tried keeping that factory cross member this time... never had before. Well, still didn't work out I guess.. only because I modified the bracket though. So, Justin went ahead and cut it out for me. What a bitch that looked like! I do plan to add a horizontal tube in it's place across where my c-pillar diags land. 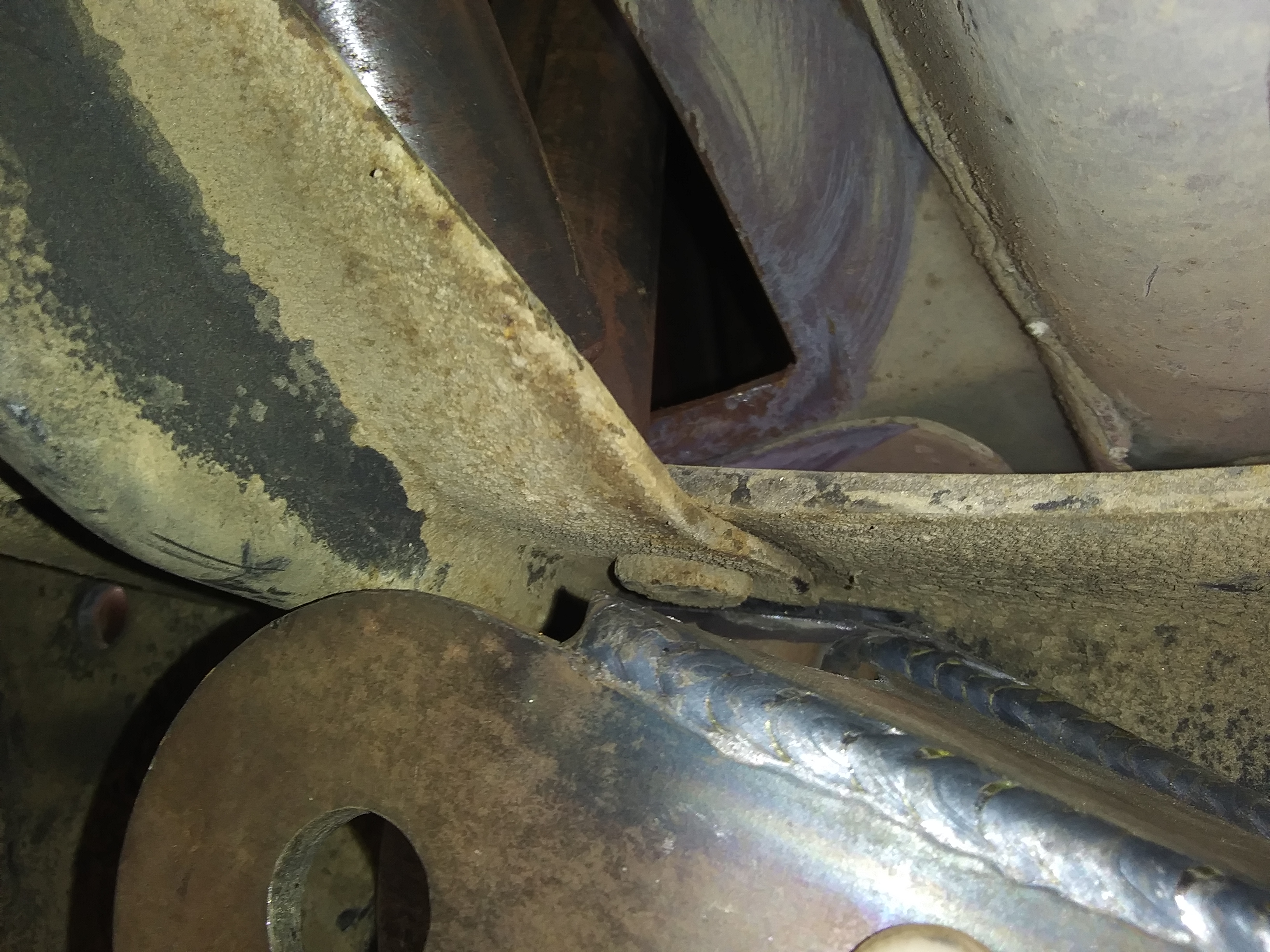 Back to arts and crafts time for me. I am not sure I dig the plain boring look of the tabs.. but it's a start. I have never tabbed an axle before, so it's been fun. I've been taking my time and taking a million measurements. From what I can tell.. this thing is off center like 1/32" or so. (when comparing brake rotors centerline to housing centerline) I have been trying to keep the pivots with small vertical spread in the back. So, been squishing the heims down as tight as possible to the top of housing.

This led me to notice something after looking at one of me old FK heims..... Muff stuff heims are fucking smaller than FK JMX heims!!! I'm not so sure my tabs will work with the FK JMX. It BARELY clears the bottom.. and the FK is more egg shaped... so it appears to hit at an earlier engle. It may or may not work at full bump. I don't want to cut new tabs either! 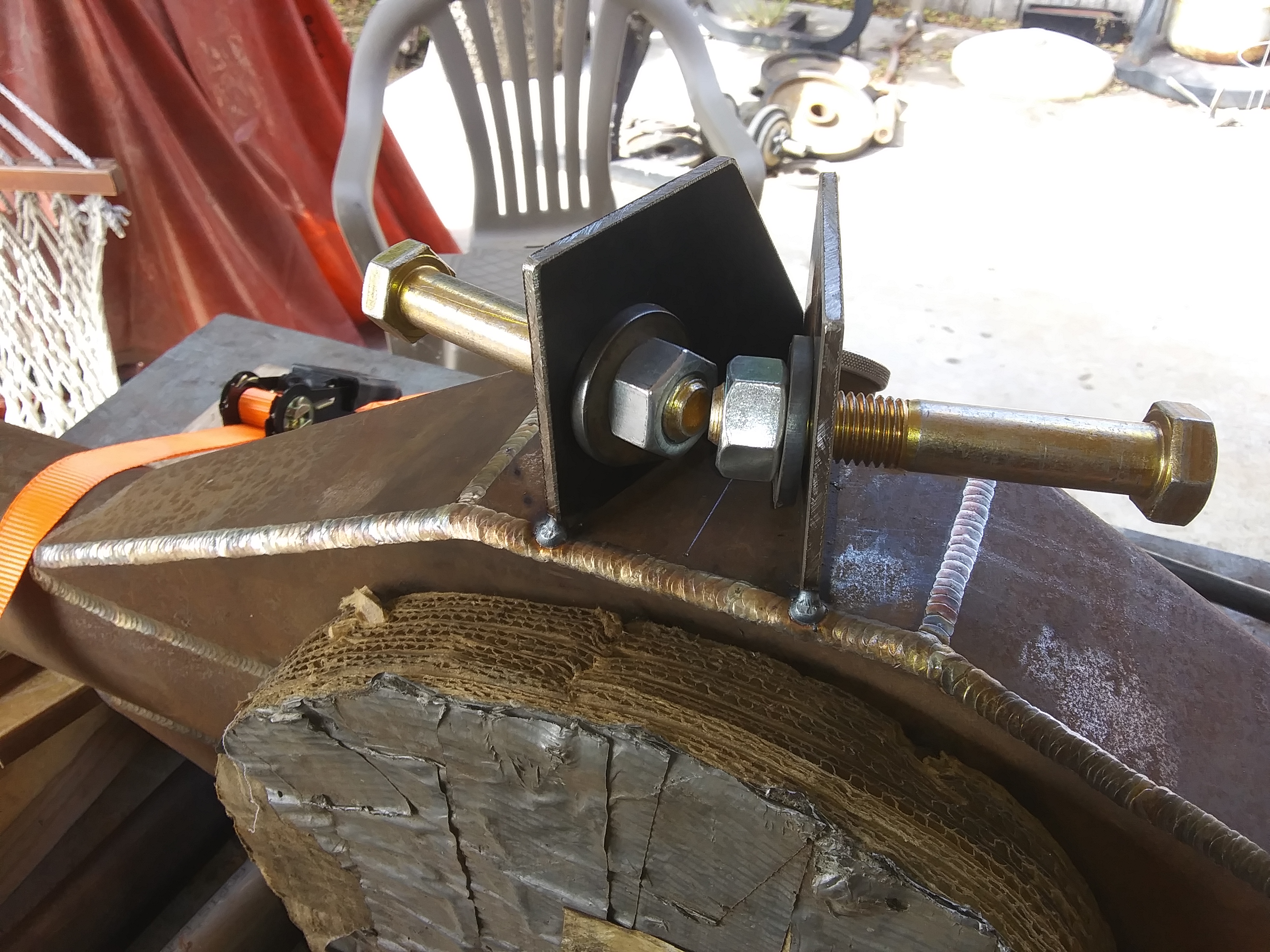 Another thing I have had in my head after talking on here... is the whole notion of where a 4-link's upper pivot actually is. After talking to barge etc on here about the geometry.... in my head, I am thinking to help minimize the duck walk/ roll steer... would be to try to make that virtual pivot as close to the center of housing as possibe (well, closer to lower axle pivot tabs actually)

So, I am trying to keep the heim as far forward as possible and angled in some to have the virtual pivot closer to actual top/center of housing. This obviously has it's own issues... as in enough clearance for a nut/wrench! Looks like it will be SUPER tight... and I won't be able to use the boxed end if I keep the 3/16" weld washers and bail the real G8 washers like I am showing in all the pictures.