So, finished up the upper mount caps. Then did the tops of lower mounts. Not sure if I am gonna do bottoms or not. Maybe when I pull beams to do bottom bump mounts. 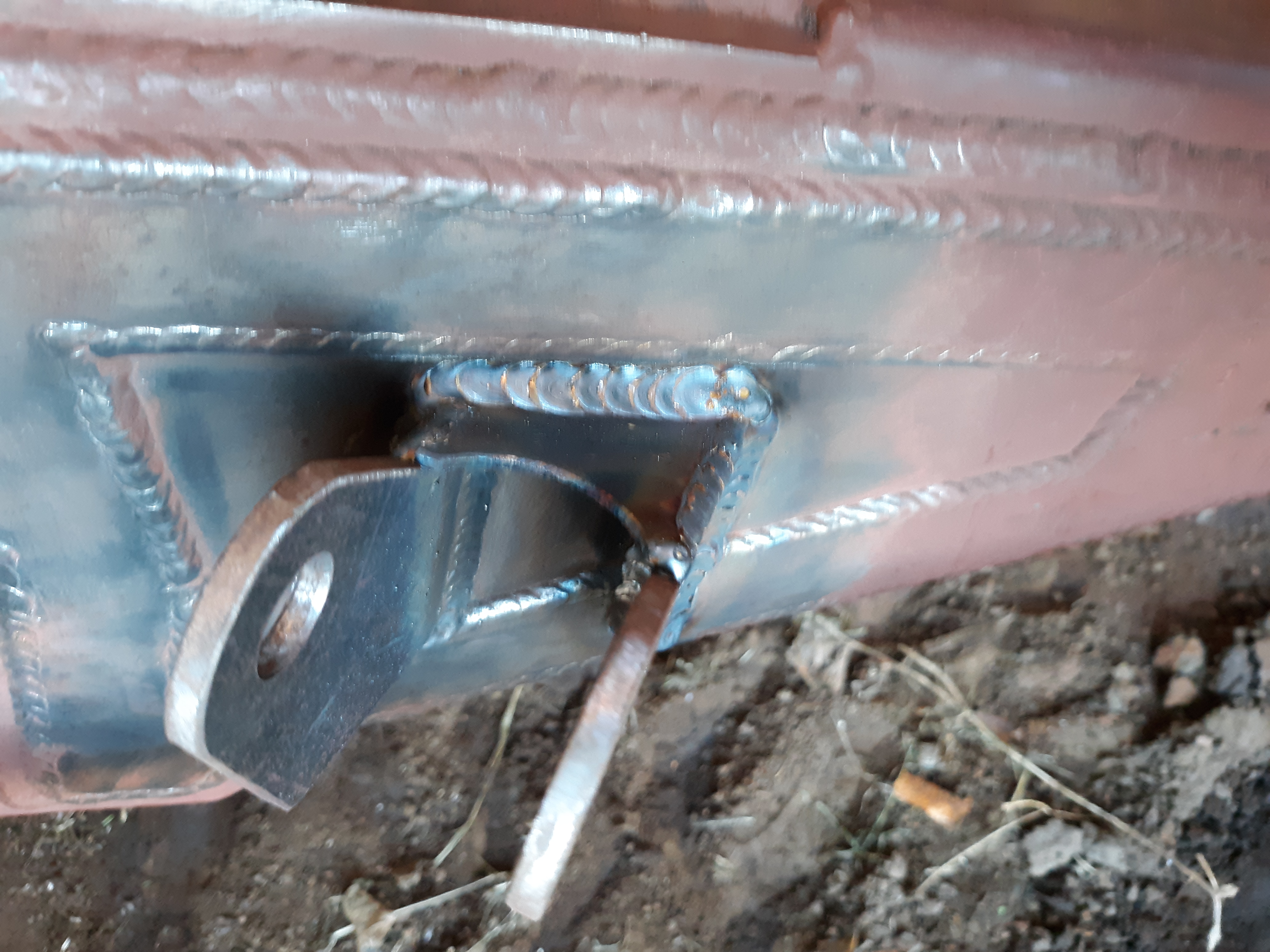 Speaking of bump mounts. Got moving on those the next day. Nailed the first tube. This is full bump. This is full droop. Can see how much space you need to clear at droop.

Make the B for bologna butterfly tabs from G3 template. Had to make it slightly bigger. Throw that bump up there metal to metal like everything else is. Clears calipers and everything... But, you will see that I positioned the can a little wrong on the first try. Noticed it was pretty close on full lock... which meant the bolts were in the wrong spot for any decent tire deflection. It was also scrubbing too much on my original tacks. So I moved the bump a tiny bit... and tried to put it at 90* to the plate at half of bump travel (like Barge had suggested in another thread.) That got the scrub down to 1/4" or less! Felt like that was as good as I was gonna get it. Oh and rotated the can so the bolts won't hit. Tire will hit smooth can now if it hits. These 50* plus notches are fun too. How much metal can you shear with a pair of vise grips?? 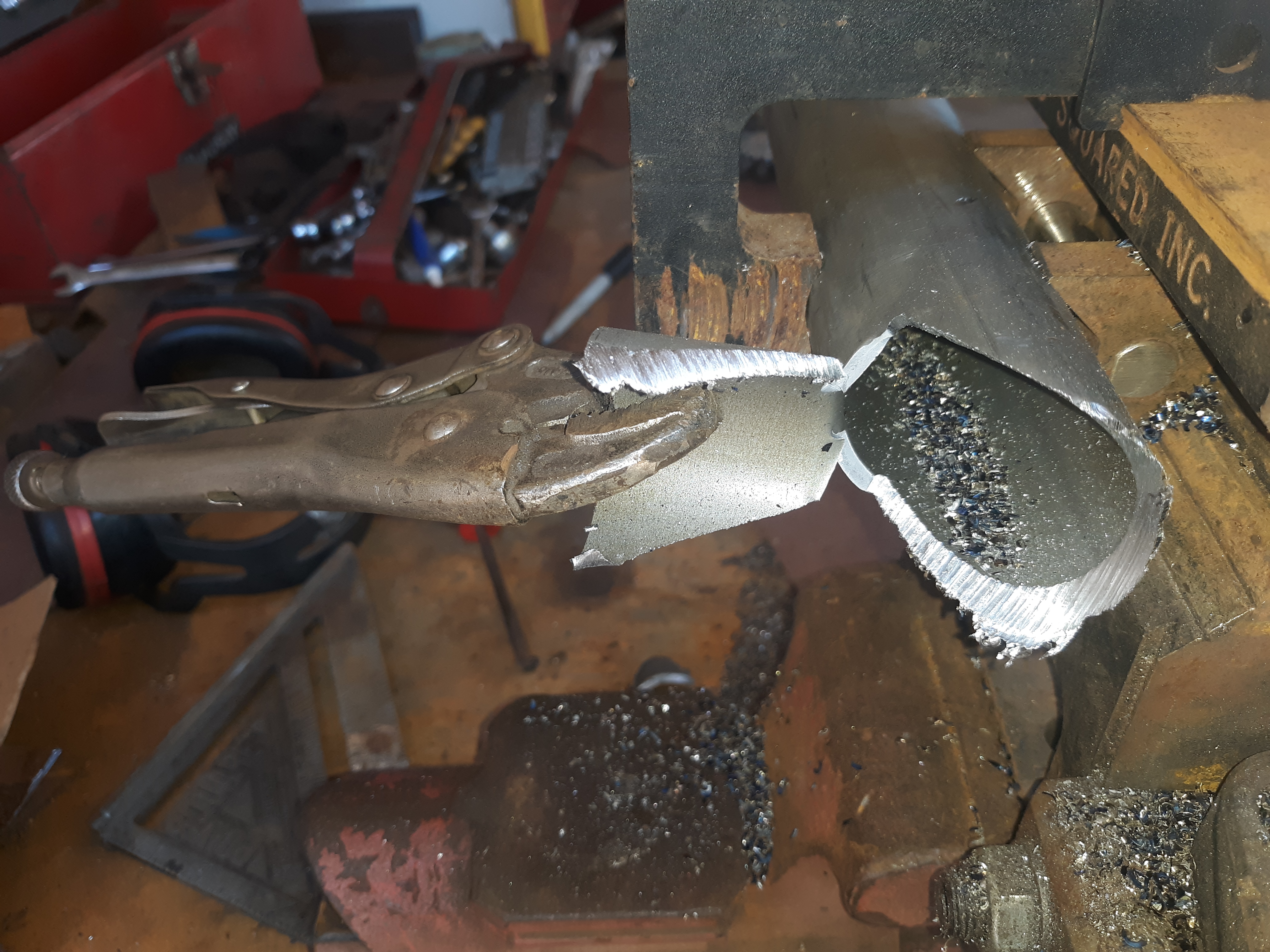 So that meant time to move to driver side. After scratching head for a while... I noticed that things don't seem to be symmetrical on Threat's radius arm mounts on beam. I swear the ears are off like almost 5*! Off in both planes too. I will confirm on the bench. I just made it the same way though. Tried to put it to 90* at half of bump stroke.. like other side.. while trying to keep other angles similar. 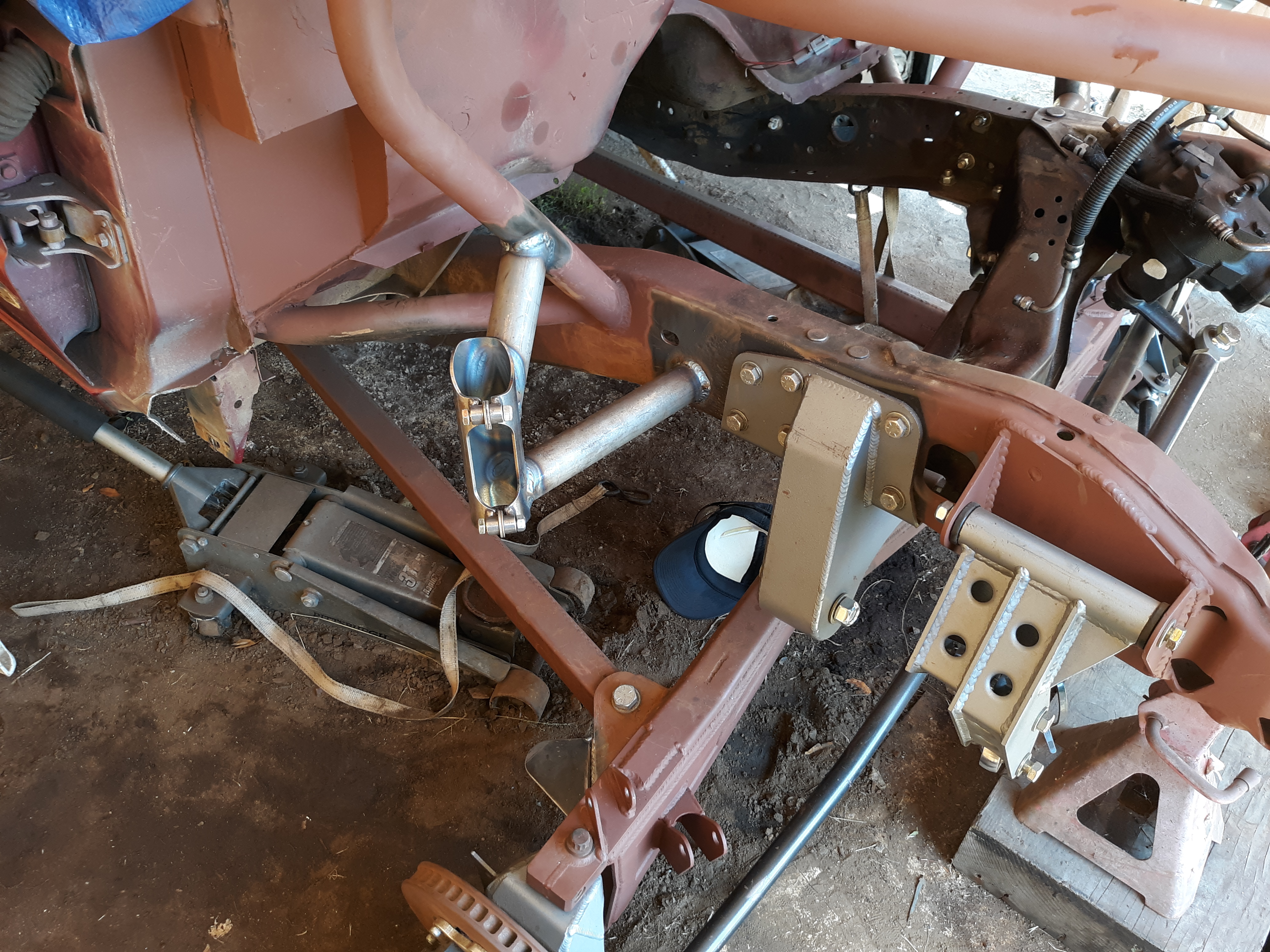 Things appear to be a little closer on this side!! Holy smokes! It is barely over 1/8" away!! I'm not sure this is accurate though. I have 1/2 bolt in that spindle instead of 5/8 and it's a little sloppy allowing extra turn. I still might limit steering a little. Hardly any loss in angle opens up that space quickly. I can do that later if needed Welded it all in. 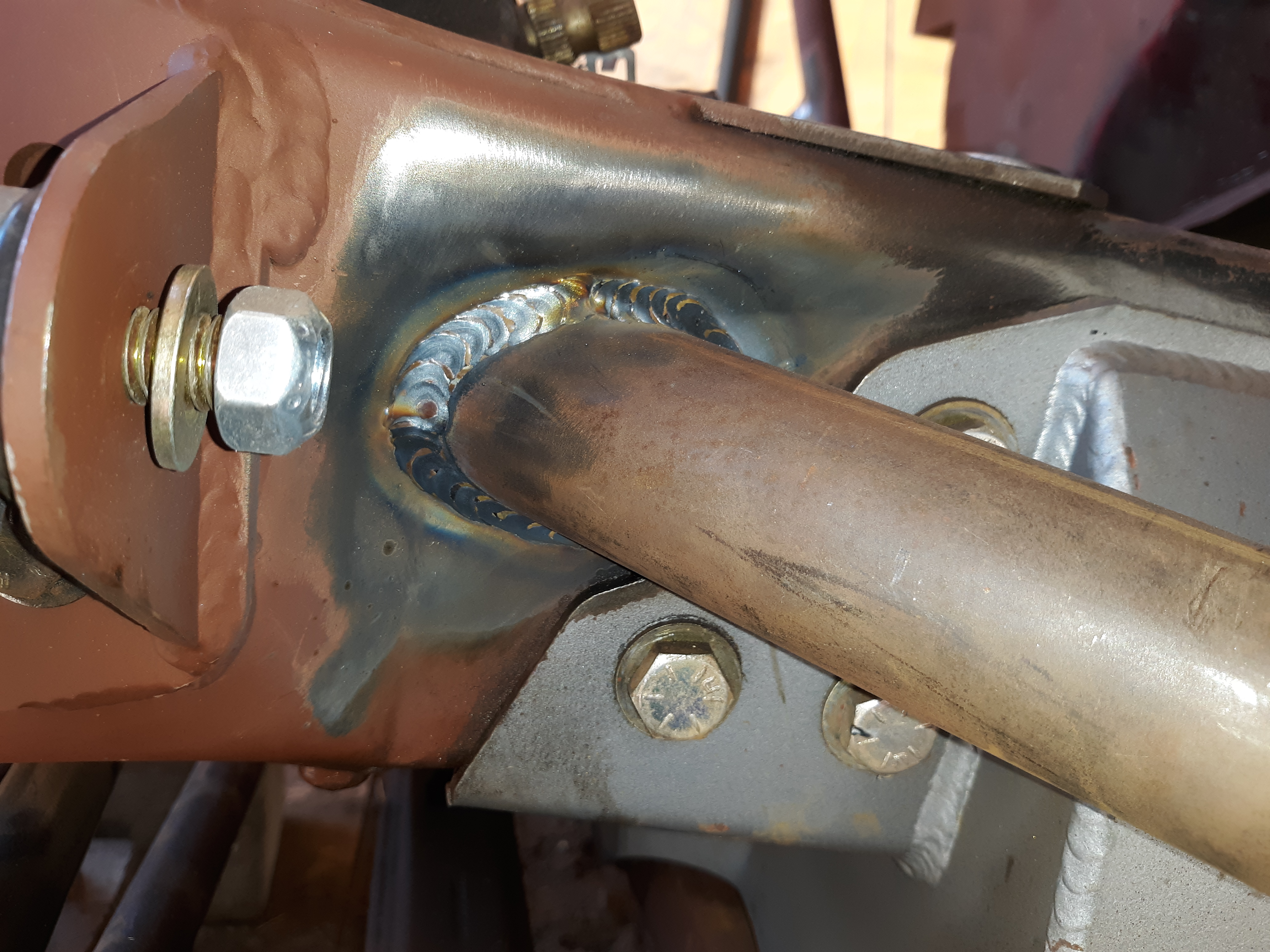 Primed it and moving on!! no time to get any work done while prepping for my river trip.... so put some wheels on it to see how it looks.

#G4 is already setting up the pass on #2Ghetto. Funny thing is... I think they are at the same price point as they sit. (minus parts you cant see here like shocks, motor/trans, dash, sway bar, and cell.) How sad.

I'm not looking forward to that final number. lol I really want to bump it out on the ground to see ground clearance... but cant until I reinforce lower front bump stop mounts. PS: This is still a few inches low compared to ride height. bump looks aight in back I think... 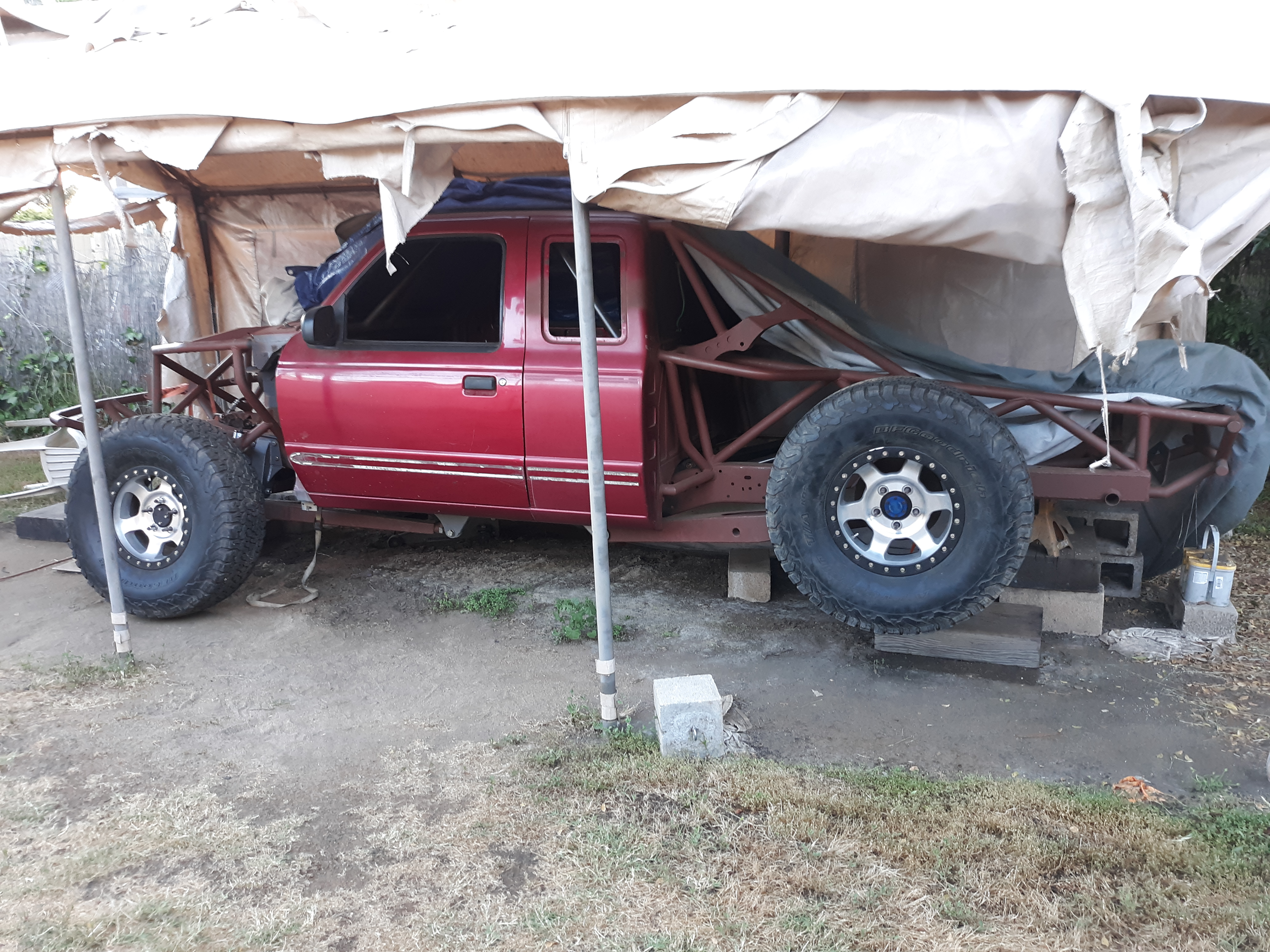 Are you keeping a cost tab on the build? I used to then stopped because it was depressing
Reactions: hxckidd, maxwell279, Turboyota and 1 other person
N

My old wheels/tires look great on there! Are those the ones you're gonna run? Progress on this thing looks killer.

nubreed71 said:
My old wheels/tires look great on there! Are those the ones you're gonna run? Progress on this thing looks killer.
Click to expand...

yea buddy!! Got um from Christian. And yes on the wheels and tires for now. Probably switch to different tire at some point.


jonsangel said:
Are you keeping a cost tab on the build? I used to then stopped because it was depressing
Click to expand...

Yep. I have total costs for the last 2x builds... and this one too. (along with all the tube specs)

It includes pretty much everything. Consumables and all. 30K+ in parts, etc. for every one of our builds. (2ghetto, BroDaddy, and G3) Of course, they progressively got more expensive....This one is probably gonna hit 50. OOOOFFF.

That's why I don't want to build another one. Cuz, how much would G5 cost in parts!!??
Reactions: charlie_brown, the bodj and Turboyota
N

Hell yeah! BTR's and 90's era Fords were made for each other.
Reactions: FasterNU

Looks old school with the belt drive and all but I literally just got back from a buddys house using his lathe to turn down some misalignments and holy shit! I want one! Hahaha also if the price is right!