So long story short. My dad bought this car back when I was a kid, had our fun in it then it sat for quite some time. Let's say 10 years give or take. Then It turned into a storage unit and sat in the back yard. Lost my dad and inherited the bug so I came up with a very bad idea.

So i've been dorkin out and doing research trying to figure out the best route to go with this car. Obviously I plan on cutting the balljoint crap off the front end and doing maybe a +6 beam and +4 arms with 3x3's in the rear and coilovers all around. I'd like it to track rite and be close to the same width front and rear. I wanna stick with the beam but if I came across an a arm kit I could afford wouldn't hesitate. This is all new to me so I have no clue what I'm doing and or if anything I am/will be talking about makes sense so don't hesitate to correct me.

So when I moved it for the first time in years it went in a straight line 60 or so feet down the driveway to AAA and was on its way to my buddy's shop.

Just kidding the thing was seized.

So off it went to the engine builder. Found out that it has a mild cam and some other nonsense not like any one cares. During all this I found out it has a 6 rib bus trans, so I looked it up and figured out that it was a 091? Which is cool. 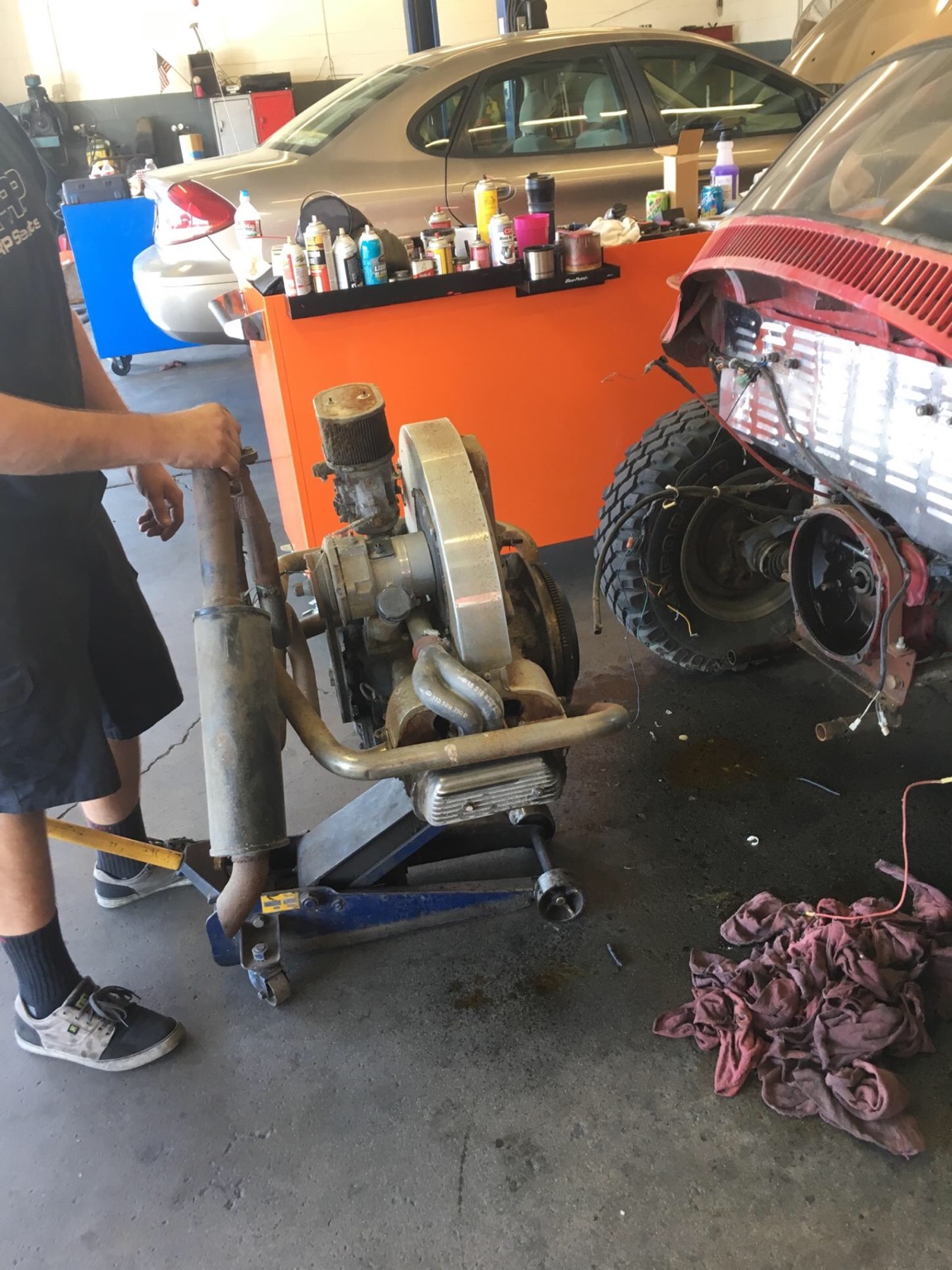 Received it back two days ago.

In the middle of trying to button everything up and get everything nice and neat.

Then tonight before heading home we were looking at it and realized the damn engine is crooked lol. Lifted the rack back up and noticed that the trans is sitting crooked (this is where you chime in) so we need to figure that out 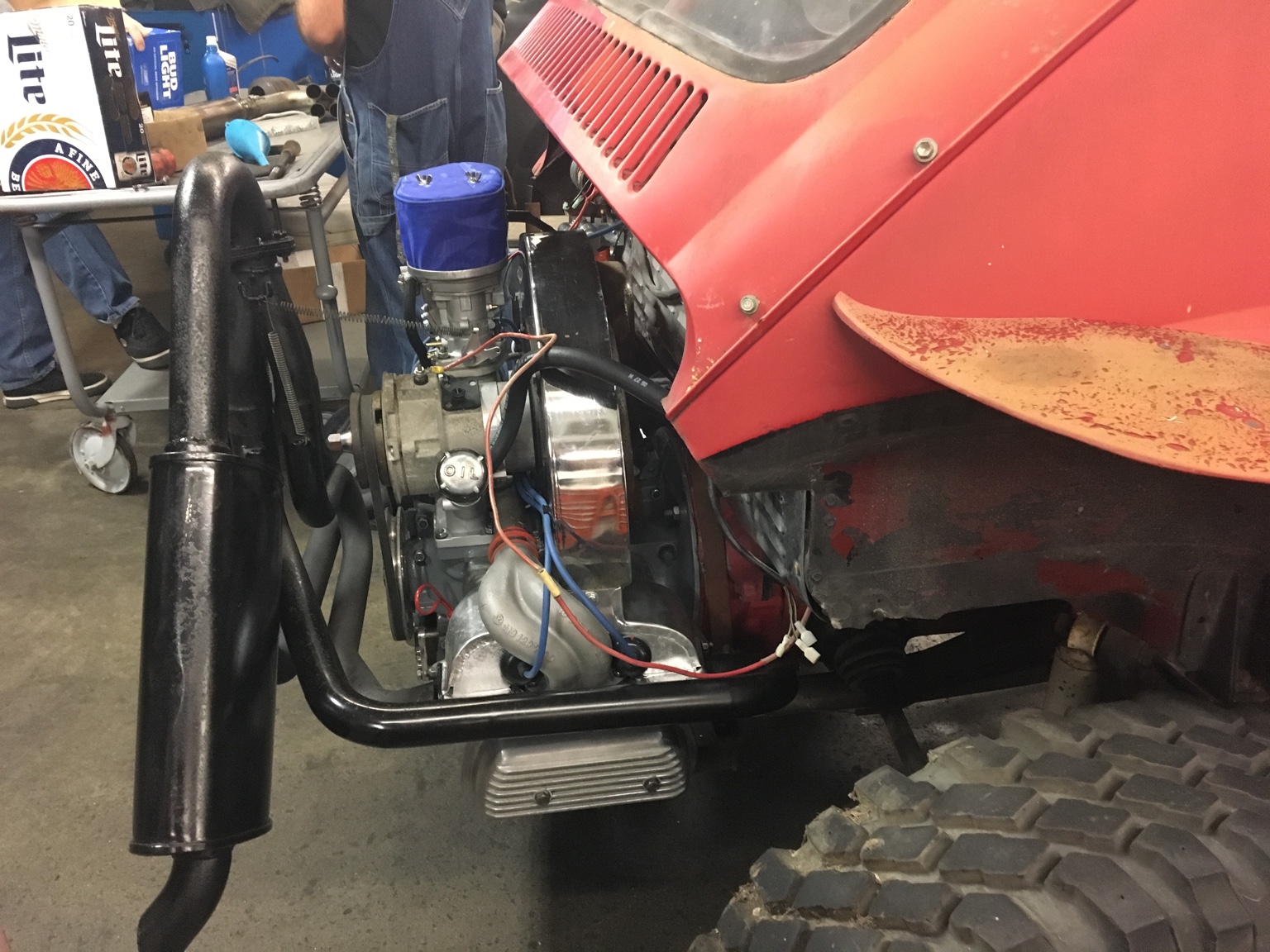 My neighbor gave me a pair of 2.0 foxes. I wanna say they are like 6.5s. So I went on a hunt and found these stupid procomp adapters to make them bolt on which was probably a waist.

Threw them on earlier today for fun they look too long.

Ordered a radio from rugged on Black Friday

It has the what I assume is a generic cage that somebody welded together drunk. Beard seats that are sun beaten that come apart each time you get in the car. Crow harnesses.. and I think that's about it. 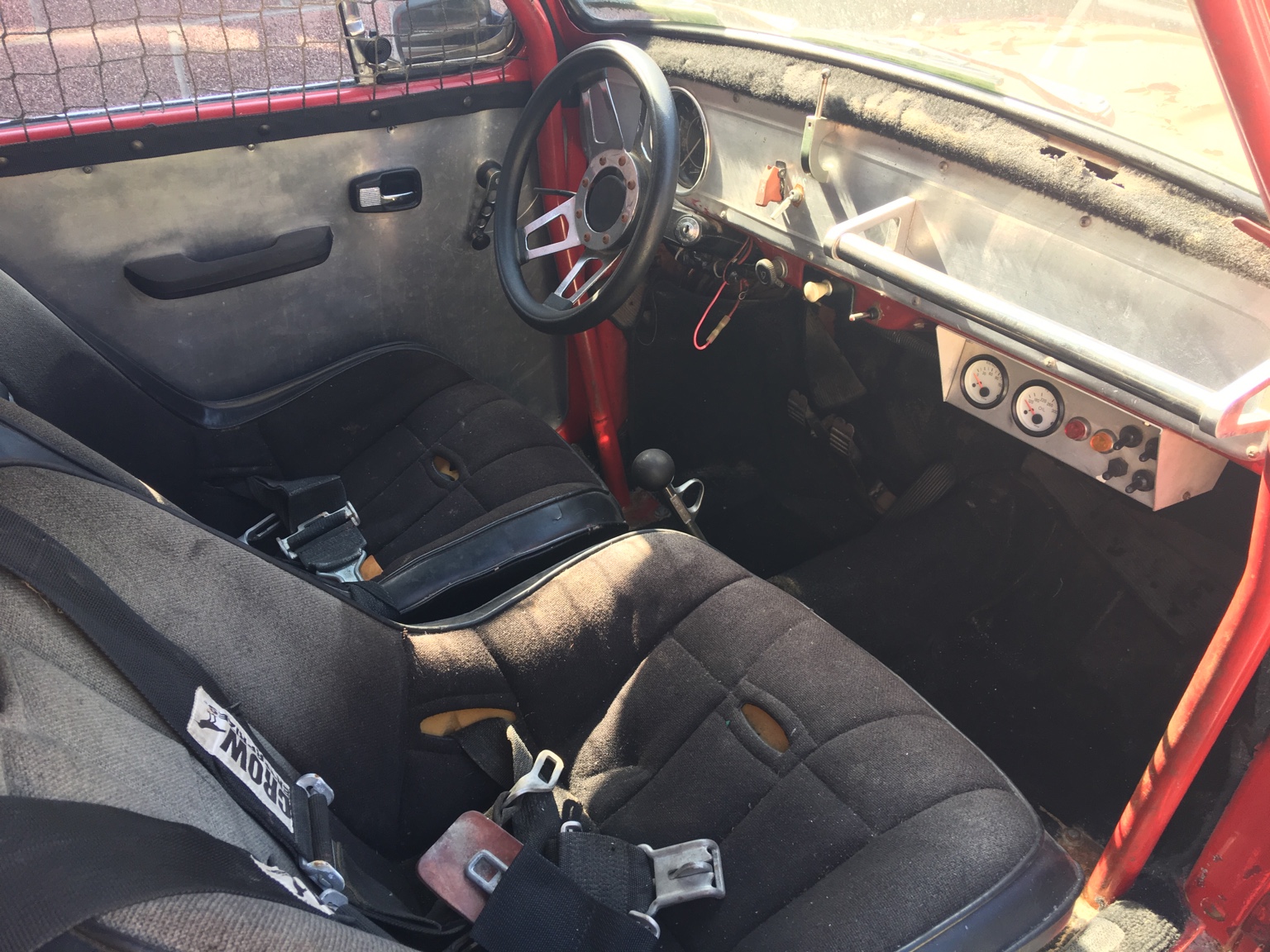 And I think that's it for now. Never mind the meth head wiring either

The stock frame horns can start cracking, depending how much you plan on building it you might want to ditch them.

I'm assuming your talking about the horns that the trans is laying between?

Was told it had straight cut gears and not to worry about the engine noise. Had no idea or did I remember it was that loud. But got the engine fired up today. Bought a new master cylinder and going to have to go back and get two rear brake cylinders and hopefully get it street worthy to get it over to AAA and get a plate on it. Bought a empi motor/trans mount that hopefully solves the crooked issue as well as a new throttle cable and some other miscellaneous crap.

Finally was able to drive the car for the first time after numerous problems with the brakes. So I brought the car home. Now all I need to do is get the crooked engine situation situated. And patiently wait for leduc.